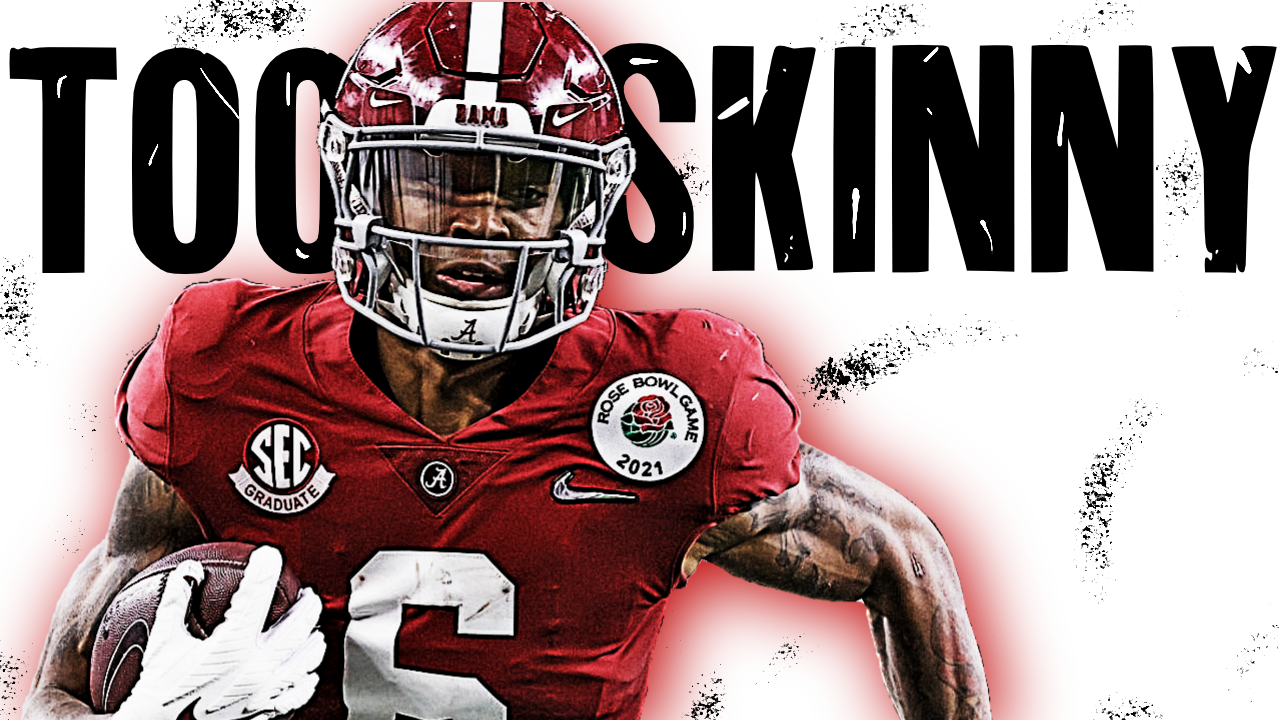 The NFL has become a passing league, and is continuing to trend further in that direction each day. Luckily for teams looking to get in on the trend and bolster their team with weapons, this 2021 WR Draft Class is legendary - better than last year's hyped-up class with game changers up top, and depth until the 7th round. Instead of just doing my normal positional rankings (check out EDGE, IDL, CB on the site!) since this WR class brings so much more than recent years - I wanted to bring more as well. Introducing my WR Superlatives!

Let's start at the top and if there is one hill I will die on this year, it's that DeVonta Smith IS NOT "Too Skinny" to succeed in the NFL. It was recently reported he measured in at 6'0, 166lbs, which would essentially be unprecedented height/weight for a WR to find success.

However, there are some legendary comparisons to make - Marvin Harrison (6'0, 178lbs) and Isaac Bruce (6'0, 173lbs) were both smaller in stature but went on to have Hall of Fame careers. Yes, they are certainly outliers, however, the cream of the crop, the elite players who could end up in the Hall one day, are athletic OUTLIERS.

They are the guys who do things 99% of the world can't do, from a perceived "disadvantaged" size profile. Aaron Donald was too small to be as powerful of a defensive tackle as he is. Derrick Henry wasn't supposed to run as fast as he can for such a massive running back. DeVonta Smith shouldn't be able to "Moss" defenders, push around Jaycee Horn and Derek Stingley, and be fearless over the middle of the field in contested scenarios, at 166lbs.

Yet he still does it. Smith's size has never been a worry for him. Not when he's put up 1200+ and 1800+ receiving yard seasons. Not when he's had 37 TDs in that time span. Not when he's been the first WR to win the Heisman Trophy as the best college player since 1991.

He's wiped the floor with Jaire Alexander in 2018, Jaycee Horn and Derek Stingley in 2019, Eric Stokes and Kelvin Joseph in 2020. Smith's weight has never been an issue vs former and future first round NFL caliber CBs. He doesn't get bullied in press at the LOS, he's a smooth criminal who doesn't even let you get hands on him.

Doubt Smith at your own will. There's not a single player who's been able to stop him in the college ranks. And there's nothing stopping Smith from putting on weight at the NFL level. I cant wait for the "Slim Reaper" to prove the doubters wrong.

Giving Waddle this award feels like I'm minimizing his game, but I promise he's so much more than a deep threat. However, that's the box I've decided to think inside, and thus we must appreciate the Tyreek Hill-level talent that is Jaylen Waddle.

He pairs elite speed with crafty routes, just like Hill. Waddle is a master of deception, especially on double moves, selling his fakes well and accelerating through the break without losing any speed. He demands double teams, and will run by them at the same time. Poor Missouri tried everything and it didn't matter. Watch out NFL, another Cheetah is about to get loose.

You thought I would only mention Smith once in this article? Ha - I guess you don't know me well enough. If you're still hesitant about his weight concerns, I don't think anything will change your mind, and that's fine, it is what it is.

However, Smith's impressive all-around game is what truly makes him the best WR this year. He has the strongest hands, regularly catching errant throws outside of his frame or leaping over defenders to make one-handed grabs. He's as dependable as they come and I'd be more worried about him being caught for using Stickum than worried about his weight.

Okay, okay, last time, I promise - Smith is also hands down the best route runner in the class. Some NFL experts like to simplify the WR position down to: Can you get open, and Can you catch the ball? I like to think there's more to the position than that but they have a point, and Smith is the best at both these aspects.

His releases off the line are explosive, deceitful and smooth like butter. He reminds me a lot of Davante Adams in this regard - being able to vary the tempo of his releases and sell the CB the story he wants them to read. Every route Smith runs has a purpose, from the first to the fourth quarter he's always setting up his defender to fail.

There's more than one aspect to route running, and Smith excels throughout the phase and at the stem as well. While he usually beats the CB clean off the line, on the rare occasion he doesn't, Smith is a master at defeating a CBs hands. Running downfield he bends and contorts his body to attack the leverage of a CB, and explode in the opposite direction - sharply breaking off his routes at the stem to leave his defender in the dust.

Smith is consistently open, like WIDE open - Tua Tagovailoa and Mac Jones should really be sharing some of their rookie contracts with him. Smith made their job's a hell of a lot easier.

One of my favorite aspects of WR-play is when a player can out-muscle a defender on a jump ball. I'm pretty spoiled after watching Andre Johnson and DeAndre Hopkins my whole life, so I know a good jump-ball WR when I see them.

Nico Collins pairs elite height (6'4), vertical (37") and arm length (34") which makes him nearly ungaurdable in these scenarios. He has great timing to high point the ball and vice-grip hands to make the ball his. There's a subtlety to his ability to separate from his defender on these throws. Using refined route running technique but also effective push-offs at the last second.

I think Nico is an absolute stud, and a more well-rounded WR than he's given credit for. However, at the very least he'll be a red zone dawg and TD machine.

One of my favorite players in the entire 2021 class, ISM is deserving of infinitely more respect. His stature and game reminds me so much of another Smith, you guessed it, DeVonta Smith. Both wear #6, have similar builds (ISM: 6'1, 181lbs, DeVonta: 6'0, 166lbs) are nasty route runners, have strong hands, and get you YAC due to their elite athleticism.

Smith-Marsette simply knows how to get open, and his situation at Iowa was certainly not one that put him in a shining position to get recognition. He's never put up more than 700 yards in his 4 seasons - but is the perfect example of why you value traits>production when evaluating college prospects.

I hope NFL teams haven't gotten the memo yet, and the Houston Texans are able to take advantage. If there's one WR I would bet will outperform his draft position, Smith-Marsette is my guy.

I couldn't go through this article and not give Cornell Powell his deserved flowers. This award is dedicated to one of my favorite WR sleepers in the 2020 class - Quintez Cephus. The 5th round pick out of Wisconsin and now-Lions WR was seen as quite puzzling at the time. Writers went as far to say he was the most controversial pick of the entire Lions draft class.

Fast forward to the end of the season and Cephus was a pleasant surprise and one of the better Day 3 WRs. I liked Cephus a lot more than the consensus, ranking as my WR9 last year. While he's not the biggest (6'1), the fastest (4.72 40-YD) or the flashiest, Cephus knows how to get the job done. He is an ultra competitor who runs physical routes, has strong hands and blocks his ass off.

Now, let me introduce you to Cornell Powell. At 6'0, 210lbs with a 4.52 40-YD and just one year above 125 receiving yards (2020 with 882) the numbers certainly don't excite anyone. However, just like Cephus, if you turn on the film you'll see a promising player who does whatever it takes to win.

Cornell Powell, WR, Clemson
- Measureables, athleticism and playing style reminds me of D Hop
- Not the biggest, not the fastest, but wins with physicality and competitive nature
- Great body control on sideline, jump balls+strong hands

Powell does all the little things that contribute to winning - whether it's setting a legal pick for his teammate to get open, blocking for his RB downfield or picking up every yard imaginable after the catch, Powell is the perfect WR to round out your position group.

He has a lot more potential to reach, showing flashes of absurd contested catches on the sideline. His body control and strong hands reminds me a lot of another Clemson WR, DeAndre Hopkins. Again someone who's not the biggest or fastest - their measurables and testing results are actually eerily similar - but is one physical SOB. You can tell CBs hate having to guard him and I love the competitive nature that Powell exudes on every play. He's just fun to watch and root for because you can tell he's trying to prove himself every time he steps on the field. BRING HIS ASS TO HOUSTON PLEASE.

So I kind of cheated on this pick - of course the highest rated players in the next Madden will likely be DeVonta Smith, Jaylen Waddle or Ja'Marr Chase (not counting Kyle Pitts as a WR until he says that's what he wants to play). However, every year there's a ~60 rated player who outperforms guys rated way higher. You're typical budget beast who defies the logic of the game with absurd speed and the ability to juke defenders out of their shoes.

That's exactly what Jaelon Darden exemplifies on the football field. He is literally a human joystick, exploding out of his cuts like Tyreek Hill. His elusiveness and instant acceleration is like someone created a Madden player and turned the sliders all the way up to 99.

He is a vertical threat out of the slot, and despite his smaller stature (5'9, 170lbs) he is pound for pound one of the most talented WRs this year. Some team will get a steal on Day 3.

I'm seriously surprised by the amount of hype Rodgers has gotten nationwide. WR9 for The Draft Network, WR11 for Pro Football Network, but just WR24 for me. Maybe I'm missing his best film but I just don't see it with Rodgers.

There are so many athletic slot WRs this year who run better routes than Rodgers. His best quality is at getting YAC due to his contact balance, but I struggle to believe in his ability to consistently get open to get the ball in the first place. He is a good but not great athlete whatsoever and as the nickel position only improves in the NFL, I don't think Rodgers will stand out.

Best WR Pick for Texans in each round