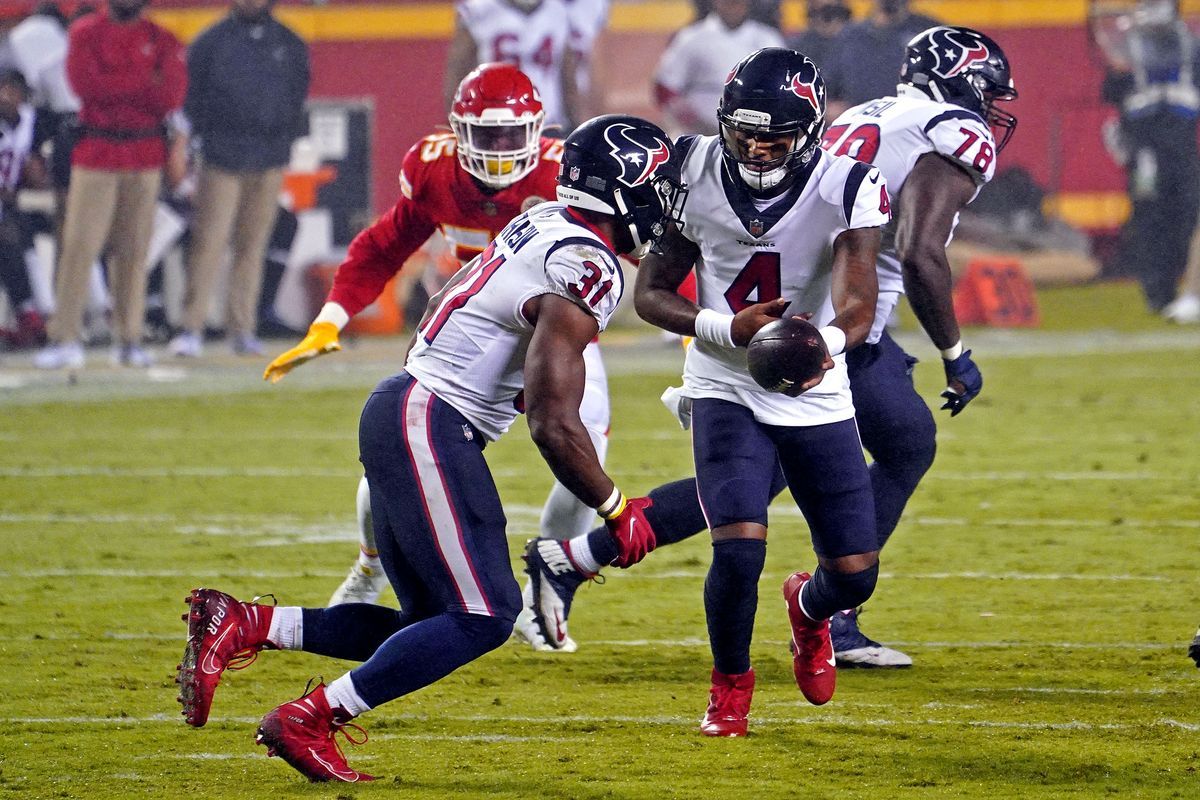 There was a lot of hype for the Houston Texans offense going into the 2020 NFL season. I will be the first one to tell you that I believed in the talent on this roster and thought that we would look a lot better than we have. It's been a rocky first five weeks and in this article I will be taking a look at the running game, what has worked and what hasn't worked. Trying to find a solution for the rest of the season.

Five weeks into the season and the Houston Texans currently sit 18th in offensive DVOA (per Football Outsiders). I prefer using "DVOA" (Defense-adjusted Value Over Average) over statistics such as total points per game, total yards per game, total passing or rushing yards per game, because DVOA takes into account a league average baseline, and adds context to each play.

That being said, the Texans passing DVOA (20.5%) ranks 13th in the NFL, and their rushing DVOA (-17%) ranks 20th. I honestly thought the passing offense would rank worse, based off what we've seen so far (only one game above 23 points). While there are many reasons why the offense hasn't lived up to it's potential, one of the major reasons is the running game. It constantly puts Deshaun into tougher situations on 2nd and 3rd and long, making life much harder than it needs to be and leading to inefficient offense.

There are many aspects that go into the running game, the scheme, the offensive line, the running back, even the blocking from TEs and WRs and the adjustments a QB can make at the line. In this article I'll be focusing on the OL and RBs performance, while touching on the scheme a little.

To be completely honest, I think the OL is most to blame, for the run game struggles. They have been run blocking at a below average unit, and have struggled to open up lanes for David or Duke Johnson. A lot of the issues they are showing, are basic fundamentals, and that leads me to believe that coaching (Mike Devlin) is to blame. It's not just one player struggling, they all have their bad reps, across the line, from Tunsil to Tytus.

The first thing I noticed is a lack of push, generated on the LOS. This is due to poor pad level, leading to lack of leverage and less strength. In addition, poor hand placement. To be strong, you need to attack defensive linemen in the chest. Often times our OL get one hand on the chest of the defender, but the other on their back. Coupling this with poor knee bend, and it's just a horrific recipe.

Look at Tytus Howard (#71) on this rep. He needs to execute a double team with Zach Fulton (#73) on DT #90. Look at how he lowers his head, bending from the waist, instead of the knees. He isn't strong that way, and it's coupled by the fact he only gets on hand into the chest of the DT, and the other on his back. The DT doesn't get moved, and is able to split the double, disrupting the entire play.

This next rep is a perfect example of the good and bad, with our OL. First let's look at the left side. Senio Kelemete (#64) and Laremy Tunsil (#78) work a double team well. Look at Kelemete bend from the knees, so he's stronger. Look at his pad level, and how his head is still up, compared to the rep before with Tytus, night and day. The result? Much better drive on the DT and push down the LOS.

Now look at the right side of the line. Tytus again lowers his head when he tries to make his block. He whiffs because he's off balance, and nearly ends up on the ground. Nick Martin does well to help Kelemete drive the DT (#52) away, but when he needs to make it to the 2nd level, we see problems. See how he lowers his head, just like Tytus, and thus misses.

Balance and leverage is so important for OL, and we just don't play with those qualities consistently enough. The other major issue I see with our OL is we don't finish our blocks. When we do make contact, we aren't able to sustain a block for long enough for the RB to get through the hole. Watch Fulton and Kelemete here. They do well to drive on the initial block, but when Duke gets to the hole, but DTs are able to get off the block.

I don't know if you can blame this on the OL themselves, saying they lack dawg and a mentality to finish plays. Or if this is on the coaching staff, for not preaching blocking to the whistle. I would say that Fulton and Martin are the biggest culprits (see play below), but even Tunsil struggles with this from time to time.

That's enough of the OL (for now), let's look at David's performance. Here's my take on David, he's not as horrible as some people make him out to be. He needs good blocking to succeed, he's not someone like Dalvin Cook who can make up for horrid OL play, with his athleticism and cutting ability.

When holes are there for him, he can hit them. I particularly like his ability to find the cutback lane, on outside runs.

The issue here though is that the cutback needs to be OBVIOUS. He's not prime, 2016 David Johnson anymore, being able to create something out of nothing. Look at this play, where there's another lane to his left, behind Kelemete and Martin's double team. Yes, this is horrible by Brandin Cooks, and he's mostly to blame, but there was still meat left on the bone, David.

While we can't fault David for the lack of holes created by the OL, when holes are there and he's able to get to the 2nd level, he can't fully maximize yards. Great/elite RBs are able to break tackles and make defenders miss. This is something that has been next to nonexistent with David this year.

Look at all the space on the backside of the run. David can make that first cut to avoid the DT beating Nick Martin, and he goes untouched to the 2nd level. This is what separates average and above average RBs. He needs to make that LB miss, he just needs to. This is a good opportunity to get 7-10 yards, but he only gets 3 because his jump cut takes him nowhere.

His cutting looked great vs Kansas City early, but has been downhill ever since. Here he has a 1-on-1 with a DB on the edge, and I've seen so many RBs be able to cut it to the right and break that for six. Yes, the OL let's him down on the left side, but you can even see David take a step to the right. He thinks about trying to beat the DB, but goes to the left instead, a dead end.

To summarize, David can hit the hole when it's obvious and given to him. He can still have a positive role on an NFL team. HOWEVER, he's not someone who will elevate a crappy OL, or maximize yards at the second or third level. In addition, there are ways that he can be utilized better, to make the best out of a shitty situation.

One thing I've always hated about the Texans offense under BOB is the lack of identity they've had. Particularly in the run game, where many teams love to either focus on a zone or power scheme. I often thought BOB didn't really have an identity, but I think that's because I was scared of the truth. That he actually was crazy enough to want to "establish the run" up the middle, between the A Gaps, all day long. I didn't want to be that team that relentlessly told their "speedy", "elusive" receiving backs, to ram up the gut, helplessly. But alas, here we are.

The Texans primarily run "inside zone" (a zone concept) and/or "duo" (a power concept). The two look very similar and I will admit I'm not an expert in deciphering the difference (not many NFL experts I know, can either). But what I don't like about this concept, is it relies heavily on physicality, brute force, and just out-muscling the man in front of you.

While in theory I would love for our OL to be a group of nasty, hard nosed goliaths', it's hard to consistently push around other 300+ pound freak athletes in the NFL. The Texans line irregularly creates a push at the line of scrimmage (LOS), displaying an inability to out-muscle the opponents.

That's what the stats say, and the film backs it up nicely. On inside zone here, look at how David aims for Zach Fulton's outside hip. Fulton and Martin get next to no movement though, and Tytus doesn't create any drive either. The real issue though is Kelemete not being able to reach his block. This leaves DJ with a 1-on-1, that, as I showed before, he just can't win. This is just bad by everyone.

Take a look at this play again. The first step doesn't cover much ground horizontally, they are purely relying on their strength to drive double teams. But as we've seen, we aren't able to do this consistently. David really only has two options here, the gap between Martin and Fulton (covered by LB) or the gap between Fulton and Tytus. Fulton loses his block and this run never had any chance. We're making life harder on the entire offense, forcing our guys to run block inside zone/gap, rather than outside zone.

Instead, look at how outside zone opens up more opportunities for David. The first read on these is always going to be the edge. If it's blocked nicely, you take it, simple as that. Here, Tytus does well to turn his body and seal Josh Allen inside, and away from David. There's not many other good blocks on this play, but because we win the edge (and the safety takes a bad angle) it's an easy success.

I mentioned before about how David has shown the ability to hit the cutback, when it's obvious. With outside zone, there's far more opportunities for the cutback to open up, than with inside zone. Tunsil clears #96 down the line, and the key here is how tightly David runs behind Tunsil. They are brushing shoulders, and that gives him a straight line path, to the most yards.

The coaching staff needs to put the offense in a position to succeed. RUN MORE OUTSIDE ZONE! PLEASE. However, at the end of the day, the offense still needs to execute. We can call outside zone all day long, but the blocking needs to be there. Let's look at the biggest run of the season, and see how play call meets execution.

It's outside zone to the right and quite literally every single player make's their block. Even the TE's Pharaoh Brown and Darren Fells make their blocks. David goes untouched around the edge, and even finally shows the ability to make someone miss.

When all of these elements finally mesh together, you get big runs. Good playcall, good blocking by the OL, good blocking by the TEs, good cut by David. There's a lot that goes into the run game, and this year, if one of these variables failed, the entire play failed. We need to be perfect, every rep, with our inside zone heavy scheme, and that's just asking too much out of the offense. Go with more outside zone, where there's more room for error, and we block it better. COME ON TIM KELLY I BELIEVE!