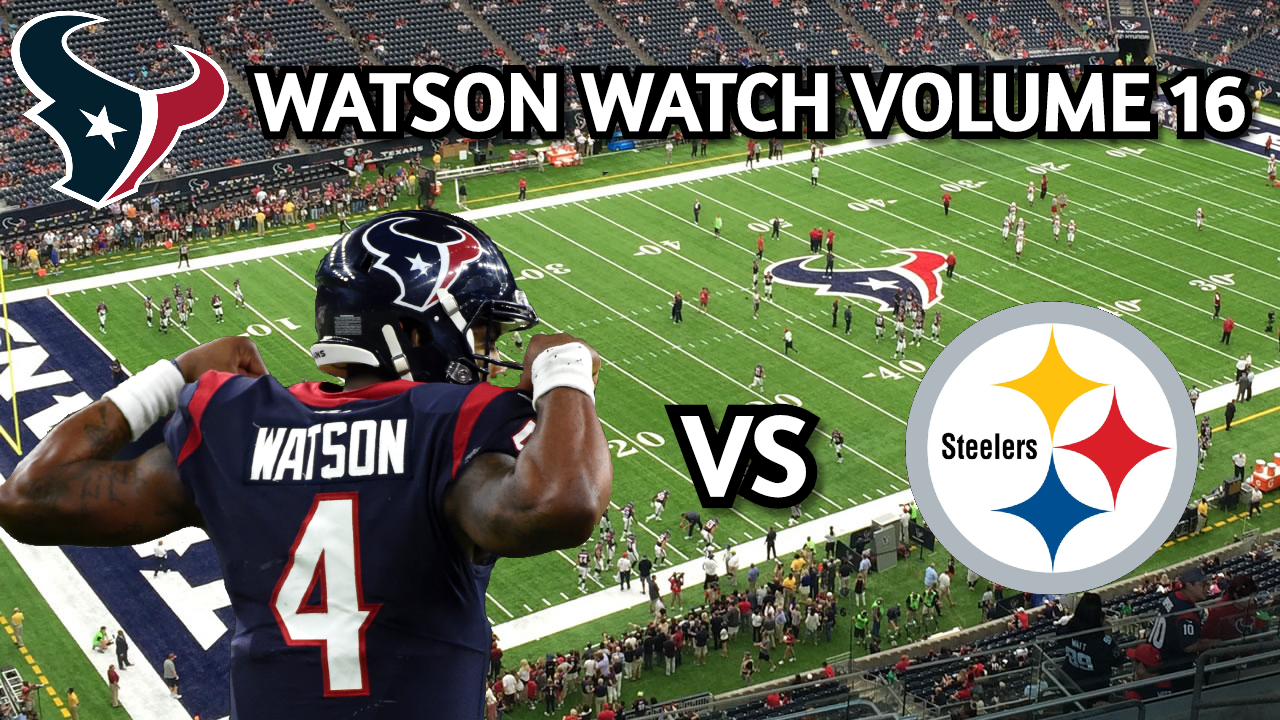 Facing an elite Pittsburgh Steelers defense, I didn't have high hopes for our Houston Texans offense. However, they proved me wrong during the first half. A clean 21 points had me thinking the offense finally found it's groove. Alas, that satisfaction could only last so long, until the 2nd half kicked our butts. What went right? What went wrong? Let's see what the film has to say about Deshaun Watson and the offense's performance.

It really was a tale of two halves, and here are my main takeaways for why the offense looked so good in the 1st half.

- Somewhat manageable 3rd downs - average distance of 9 yards; if you think that is bad (it is), wait till you see what it was in the 2nd half.

Take a look at this 3rd down. As Deshaun Watson hits the top of his drop, he has a pretty clean pocket. He decides to step up even though he didn't really need to and has Brandin Cooks wide open over the middle. OL, check, WRs, check, 1st down, check. It sounds obvious, but if all the aspects of the offense DO THEIR JOB, we move the sticks.

We had a lot of success going 5 wide, and here you can see everyone does their job again. Watson has a comfy pocket, Fuller finds the hole in the defense past the LBs and in front of the Safeties, and this is easy money. Good ball placement by Watson, to lead him away from the LB coming over the middle.

Watson was in a rhythm, finding any and everyone open in the Houston Texans offense. And this next play showcases something he didn't have last week - trust. Look how he stands tall in the pocket, despite incoming pressure. Last week he didn't trust the OL and was scrambling unnecessarily. He also trusts Cobb to get open and throws it as soon as he gets past the CB. Trust is everything in this system, and it's great to see Watson is forming it again.

The Pittsburgh Steelers played a lot of Cover 2, and these next two plays show how the Houston Texans were able to beat it. The first step was going 5-wide to stretch the defenses zones. On this first play, the bottom boundary CB takes a risk and looks to jump Fuller's out route. This leaves David Johnson wide open downfield. MORE 5-WIDE AND FEEDING DAVID PLEASE.

Again 5-wide vs. Cover 2, this time Watson climbs the pocket nicely, buying time for Kenny Stills on the dig route. The trust is shown here again, as Watson doesn't look to scramble on the first sight of pressure and believes in his WRs to get open.

The best the Houston Texans' offense looked all season was on our 1-minute drill to end the half. The protection was solid, WRs got open, and Watson found them. When we make things easy on Watson, he's gonna flourish. This time vs. Cover 3, Cobb can find the soft spot in the zone. Watson stands tall and delivers the strike, even with T.J. Watt in his face.

This next play might be the best blitz pickup all year for the Houston Texans. Steelers send 6, stacking the left side, but everyone is picked up. This leaves Randall Cobb 1-on-1, and he promptly beats his guy. Watson hits the top of his drop, takes a smooth step up, and delivers another dart. Easy money when all three aspects of the offense operate smoothly.

The drive met the grand finale with a beautiful fade route by Watson. Fuller can stack the CB at the last second and make a beautiful catch. Houston could get the single-high look they wanted, and took advantage of the matchup.

For as great as the first half was, the Texans couldn't repeat their success in the second half. I wish I could say the Steelers did something different, and if we found one simple counter, it would solve all our problems, but there were a multitude of issues at hand.

- OL forgot how to pass block

To add to this, the Texans only had 4 possessions in the entire 2nd half, and 3 of them ended in 3 and outs. We didn't have enough chances to get going, and on those few chances, key mistakes killed drives.

This sack was just so disheartening because what can Watson do here? As soon as he hits the top of his drop, he's forced to scramble. Nothing is open on his right, where his first reads are. I like the pick route that Cobb set on David Johnson's man on the left side of the field, but he never has the chance to look there. Drive killed.

Next drive, and we couldn't get out of our own way. I think Watson could've gotten this ball out to Cobb on time, but he diagrees. Instead, he tries to get back some yards, but man, this offense can't recover from negative plays. If even one thing on a play goes wrong, there's no plausible way for them to succeed.

The game really hit a low when Watson threw his interception. I see what he was going for, it was 3rd and 15, and he needed to make a play to keep his team alive. He had Kenny Stills open deep if he kept on running. Stills needs to know that the play is never dead with Deshaun. Instead, the defense reads it well, and that's another drive killed.

On our final drive of the game, it started off as poorly as possible. We had been chipping T.J. Watt most of the game, but Darren Fells pushed him way too far inside. With Tytus Howard kick stepping outside to prepare for Watt's deadly speed rush, there was no chance in recovering inside. Watson couldn't even hit the top of his drop before he was under pressure.

To sum everything up, there was more than just coaching errors in this loss. When the offense was executed, they could overcome the poor playcalling. But when they blew blocks, couldn't get open or missed reads, they couldn't overcome BOB/TK. And that's the issue with this team, the talent is all there, but they have to be perfect every damn down, and that's not sustainable. The scheme should be propping them up, not reducing the margin for error. I hope we see the first half Texans next week, or else the season is over.