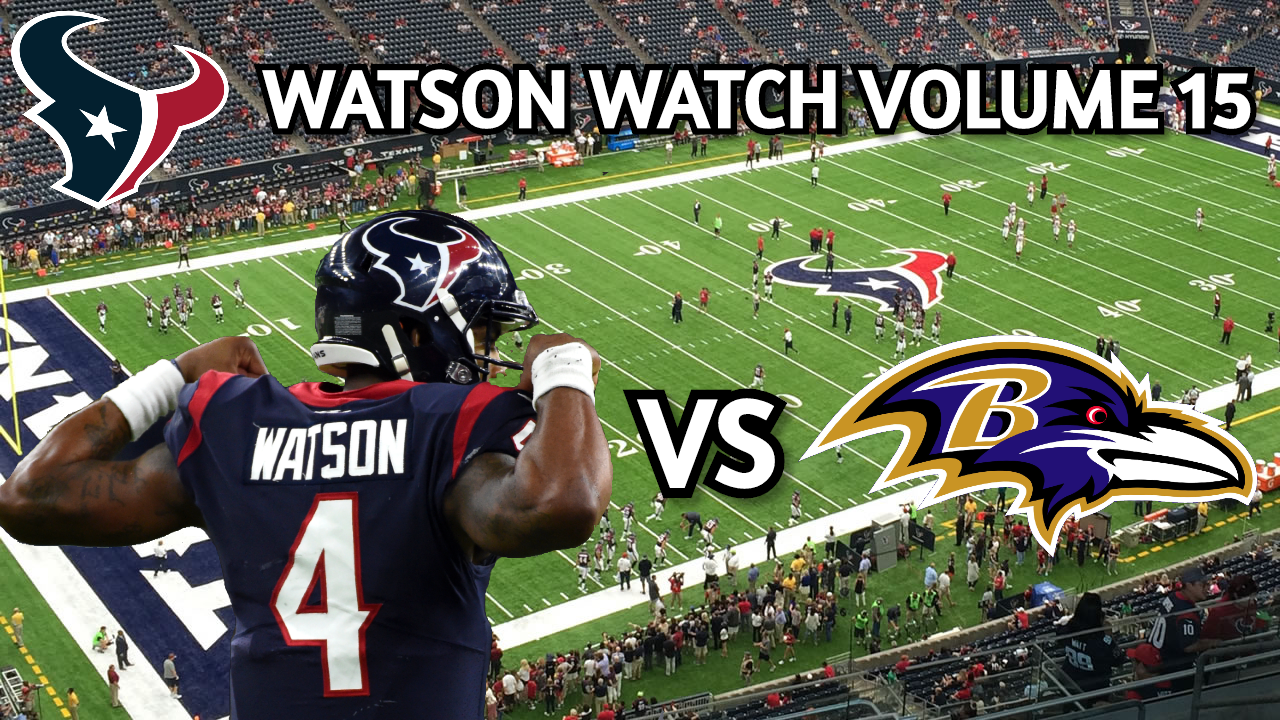 The Houston Texans, to no surprise, started the game off with two runs. David Johnson gained 1, then 4 yards, as the offensive line wasn't able to open much up, a common theme all day. The first third down of the day and I actually really like the play call. It was 3rd and 5 and we motion Jordan Akins across the field, to get him a running start.

The two bottom receivers are trying to set picks on Akins defender, to give him space. I've been wanting us to run more pick routes, and Tim Kelly is giving it to me. While the play call was good, the execution was lacking. No one really bumps Akins defender and thus he has a good angle to make the tackle, short of the sticks.

That led to a 4th and 1 at the Houston Texans own 34, and with this being our first drive of the game, not even Bill O'Brien is crazy enough to go for it. Luckily, the defense started hot and forced a three and out.

This time Houston starts the drive with a bootleg! Something I don't think I've seen out of this offense since Watson's rookie season. It creates an easy throw to the flat and moves the pocket, slowing down the Ravens rush. Another good play call, this time with good execution.

Three plays later, and we found ourselves in a 3rd and 10. The Ravens are sending a blitz, and you can see Watson point out the blitzing linebacker. A lot has been made about Watson's ability to read the blitz, well, here you go, an example clear as day where he knows the blitz is coming. Akins should be the hot read here, but he runs a seam route, one that is long developing, instead of something short and quick for Watson.

Also, #36 does well to take Akins away quickly. Since no one is open, Watson is forced to try and scramble. If no one is open, and the offensive line can't hold up, what is Watson supposed to do?

Another failed 3rd down, another punt. The offense would get the ball back with 1:14 left in the first quarter, at risk of having another scoreless quarter. These next two plays are some of the most maddening things I have experienced with this team.

On 3rd and 4th down, they run the exact same concept, two plays in a row. They do so out of different formations, but the main read is the same, a TE in the flat. First, remember the bootleg we ran earlier in the quarter. Now, look at both of these plays, and see how eerily similar they all are.

The first quarter is not even done, and they've been running this concept into the dirt. Of course, the defense will know what's coming when that's all they've been seeing. The playcalling quickly became way too predictable, and you can't do that against a well-coached defense like the Ravens. I almost forgot to shame O'Brien for this 4th down decision making.

Predictably enough, with a short field, the Ravens march down and find the end zone. The offense was doing the defense no favors. That would finally change on the ensuing drive, probably the best drive all day. Watson would go 5 of 6 and lead the charge into the end zone. Let's look at two plays that we should see more often.

First, as the Texans reached midfield, it was time to take their deep shot. They love to do this, between the 40-yard lines. They go under center, play-action fake and send Cooks on a deep crossing route. Look how he runs vertically upfield at first, before taking it horizontally.

Now, look at the Safety and how the vertical part of the route, forces him to flip his hips that direction. That subtlety by Cooks gets him open for the 38 yard gain.

THE MOMENT WE WERE ALL WAITING FOR! DESHAUN WATSON TO BRANDIN COOKS FOR THE BOMB! What a moment for the offense, I just want to see these plays more often, not just at midfield.

Down in the red zone, Watson went to his trusty Darren Fells. On the RPO, they get Watson rolling out to the right, to help slow down the rush. Fells bodies his defender on the out route, and Watson leads him out in front, where only he can get it. Glad to see this connection is still going.

That was a much-needed score before the game got out of hand, and it certainly seemed like momentum was shifting in the Texans way when the defense held Lamar and co. to a field goal. However, all of that got sucked away when Keke Coutee touched the ball. I won't even show the play to save you all from reliving the pain.

To make the fumble even worse, the Ravens returned it for six; this is Broncos' vibes all over again.

The offense needed to answer to stop the turn of the tide. Things looked promising as they marched to midfield. On our own 48, it was time to take another shot. Remember that failed 4th downplay? Remember how Randall Cobb ran out to the flat and was essentially a decoy?

Well, here we are again. Cobb motions across the formation, and CB Marcus Peters follows him, indicating man coverage to Watson. Because of this, he never sees Peters come back into the play, so when he tosses it to Cooks, he must've been shocked. So why did Peters abandon Cobb?

1. Of course, you give up the checkdown, rather than the big play.

2. We hadn't fed Cobb on that motion all day long, to keep the defense honest.

3. He's first-team All-Pro, Marcus Peters, and freelancing is his middle name. His ability to recognize plays in a millisecond have made him a rich man in this league.

So, instead of a momentum saving drive and score, the offense once again let the defense down. This was the turning point of the game, and be on the lookout on our YouTube channel for my video on this.

The Texans wouldn't get the ball back until 1 minute left in the quarter, and funny enough, O'Brien didn't just run out the clock! He was aggressive and tried to put up points! I LOVE IT! With little time on the clock, the offense was forced to play uptempo, something they've lacked in these first two games. Watson picked apart the defense on quick, easy throws. 12, 9, 13, 15, and 9 again.

Those were the number of yards per play we could pick up when we played with tempo. It looked easy, how it was supposed to look when we invested this much into the offense. Maybe play uptempo more? Just maybe.

O'Brien unwisely asked to receive the ball, to start the game. Thus, the Ravens got the ball first and took 9 MINUTES off the clock. The defense held to another field goal, and the offense got to work with 6 minutes left. Time was ticking and they needed to be aggressive.

They got to midfield again but were tasked with a 3rd and 15. The Ravens send another blitz and Watson backs up, buying his WRs time to get open. He launches a bomb off his back foot, fading away, Kobe style. It lands perfectly in Cooks' hands, and this felt like a massive swing in energy. Watson had found a WR he could trust, Brandin Cooks was much better this week, and I hope this continues.

The offense bogged down in the red zone, finding themselves on 3rd and 6. Ravens blitz again and Tunsil gives up pressure, forcing Watson to scramble. Fuller was open early and maybe Watson could've gotten it out before getting hit, but he ran anyways. He had Cooks over the middle and attempted the tough cross body throw, but it fell just inches too low, and Cooks couldn't bring it in.

4th and 6, on their 17, down big, now is the time for O'Brien and Kelly to be aggressive, not kick a field goal. Putting up 3 points still kept this a two-possession game, so I'm really dumbfounded by the decision here.

At this point, after the defense had been playing their hearts out, and the offense couldn't sustain a drive, they were clearly gassed. They ended up finally allowing a touchdown to Mark Ingram, and the game was now officially out of hand. However, there are still things we can takeaway from the offense, that can be built upon. Look at this play where Deshaun finally has a clean pocket. He stands tall despite defenders being pushed passed him, and finds Cobb for 23 yards. You give Watson time, you get open, good things happen.

Again down in the red zone and looking to score, the Houston Texans just couldn't finish the job. They need to improve their red-zone efficiency, the defense has done it, now it's their turn to step up. Instead, Deshaun takes another sack and I would chalk this one up to the Ravens just playing this really well. They bluff blitz 6, which occupies the IOL to slide left.

This means that Tytus has to block the most interior defender and leave the Safety unblocked. Because the IOL 3 are blocking 2, the Ravens create a numbers advantage and Watson is immediately under pressure. Could he have gotten the ball out? Nope, because the DT who bluffed the blitz, ran back and covered the middle of the field, where we had 3 crossing routes in the same area. You just can't let one guy guard three, you're screwing yourself.

That's gonna do it for this week. There were certainly flashes of promise, but the offense lacked any sense of consistency. Finishing off their drives with 7 instead of 3 will be huge, and eliminating back-breaking turnovers would've changed this game. On to the Steelers!