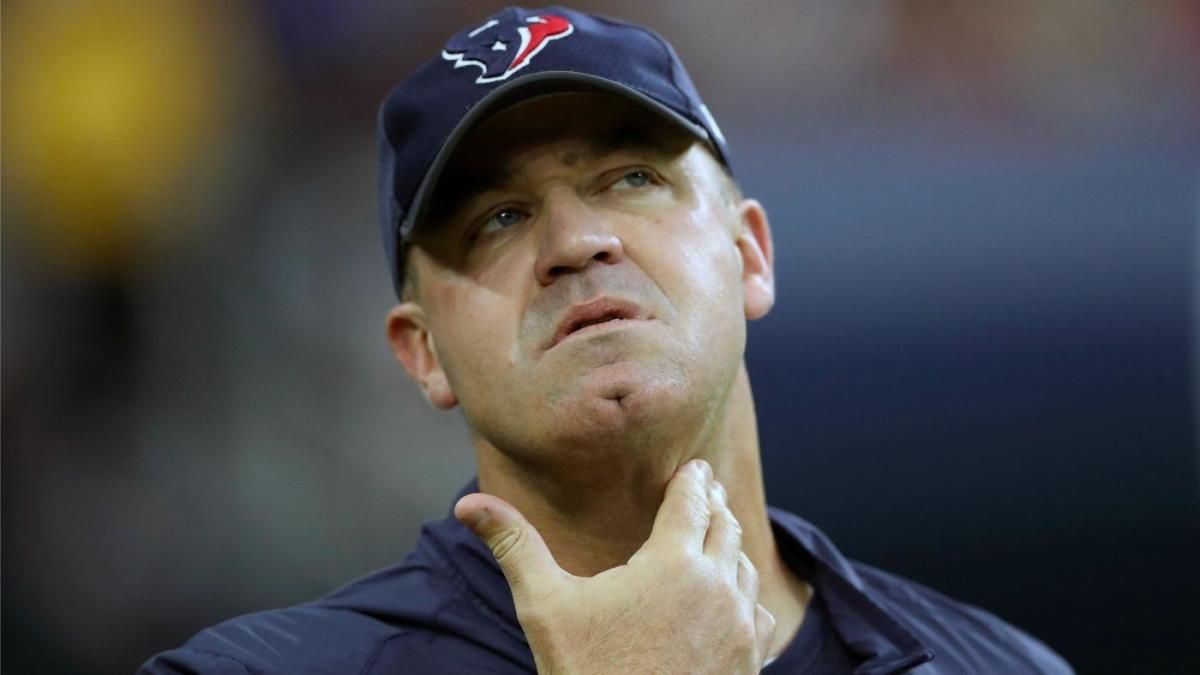 At the end of the 2019 season, the Houston Texans went into the offseason with the top odds to win the AFC South. Just 4 weeks into the 2020 NFL season and things have taken a wild turn, as the Texans now have the 3rd best odds (+1200). Let’s take a look at why those odds have taken a complete 180, and how Bill O’Brien has been the man who spearheaded the cliff dive.

Sports Betting Dime has been following the AFC South odds since the end of last season and, looking below, you can see in their graph that the Texans started off as slight favorites on March 3rd. Even though the Titans made it to the AFC Championship game in 2019, further than the Texans, bettors believed in Watson’s ability to elevate the Texans to new heights in 2020. 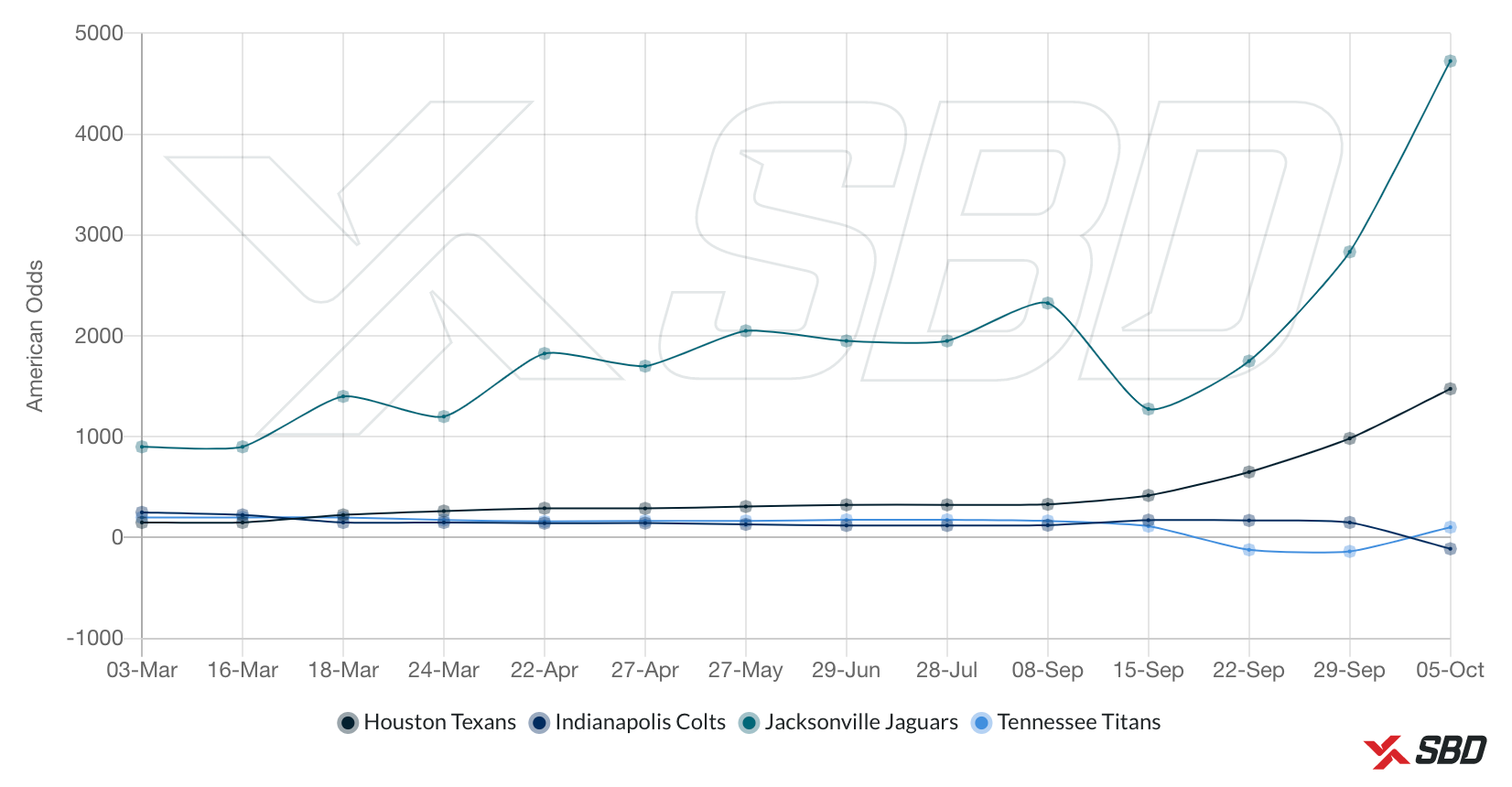 However, those prospects changed when former General Manager Bill O’Brien thought it was wise to trade All-Pro WR DeAndre Hopkins, for David Johnson and a 2020 2nd round pick. While BOB has made numerous questionable decisions, none were more polarizing than this trade. Reports are that the two had constant rifts and the final straw was when Hopkins asked for a raise, despite having three years left on his contract.

Personally, I was furious with the move and called for the firing of BOB at that very moment. Unfortunately, we were stuck with trying to believe in his vision for the offense, sans Hopkins. While I’ll admit I tried to get on board with the idea of Watson not having to force feed Hopkins, rather spreading the ball around to whoever was open, I should’ve listened to the experts. After the trade, SBD had the Indianapolis Colts as the favorites, with the signing of Phillip Rivers playing a huge role as well.

As the offseason went on, the Texans odds fell further and further as BOB’s free agent decisions were maddening as well. He quickly extended OLB/DE Whitney Mercilus to a 4 year, 54 million dollar contract. He also overpaid for backup safety Eric Murray, handing him 3 years, 18 million and WR Randall Cobb 3 years, 27 million. Don’t just take my word for it, ask any Texans fan and they will tell you about their disgust with these deals. By July, the Colts odds had reached +120 while the Texans fell below +300.

Another reason for the Texans odds falling is due to our lack of premium draft picks. The Jaguars had 2 first round picks, the Titans had 1 and the Colts traded theirs for Pro Bowler Deforest Buckner. While BOB had traded our 2020 1st round pick (and 2021) for Laremy Tunsil. While he is the best Left Tackle in the NFL for my money, investing that much capital into one player makes it hard to continuously add talent over the years. Thus, by the start of the 2020 season, the Colts had the best odds, followed by the Titans, Texans and Jaguars bringing up the rear.

The landslide continued throughout the first four weeks of the season, with the Texans falling to 0-4. Every loss was magnified by the fact that the AFC South was coming out of the gates hot. The Colts now sit at 3-1 and the Titans are 3-0, undefeated as their game vs the Steelers was postponed. Even the lowly Jaguars are seated higher than the Texans, at 1-3, which truly exposes just how poor of a job BOB has done over the offseason.

Here are the updated odds of the AFC South race, as of October 6th. It’s been a long fall for the Texans, and we should use this as a reminder of how important it is to have qualified people run a football team. As the Texans enter a new era, Jack Easterby, Executive Vice President of Football Operations must be fired as well. He was BOB’s right hand man and complacent with every poor decision made, thus he deserves blame as well. His lack of football knowledge and experience will only replicate the disaster that has been the 2019-2020 offseason. We cannot let him ruin the Texans like BOB has.

While I wouldn’t say it is impossible for the Texans to win the division, specifically because of our lackluster remaining strength of schedule, if you’re looking to make some money, place it elsewhere. Take it from someone who realized their mistake of not listening to the experts before. They are experts for a reason, take the Colts or Titans, but still cheer on the Texans, as we get to enjoy a BOB-less season, and look ahead to 2021 where we will hopefully return as the AFC South favorites.