The Importance of the Texans returning all five OL Pt.2

For the first time in the BOB era the Houston Texans are actually returning all 5 starting Offensive linemen. This is huge for continuity which will lead to better communication and chemistry. When Laremy Tunsil, Max Scharping, Nick Martin, Zach Fulton and Tytus Howard were all healthy last year, the OL looked formidable. In part 1 of this series I looked at how this chemistry and communication helps the OL with double teams in the run game, and you can check out that article here: https://texansunfiltered.com/articles/the-importance-of-the-texans-returning-all-five-ol-pt-1

In part 2 I look at how this continuity will help them with stunts, something the right side of the line struggled with due to the revolving door at RT. 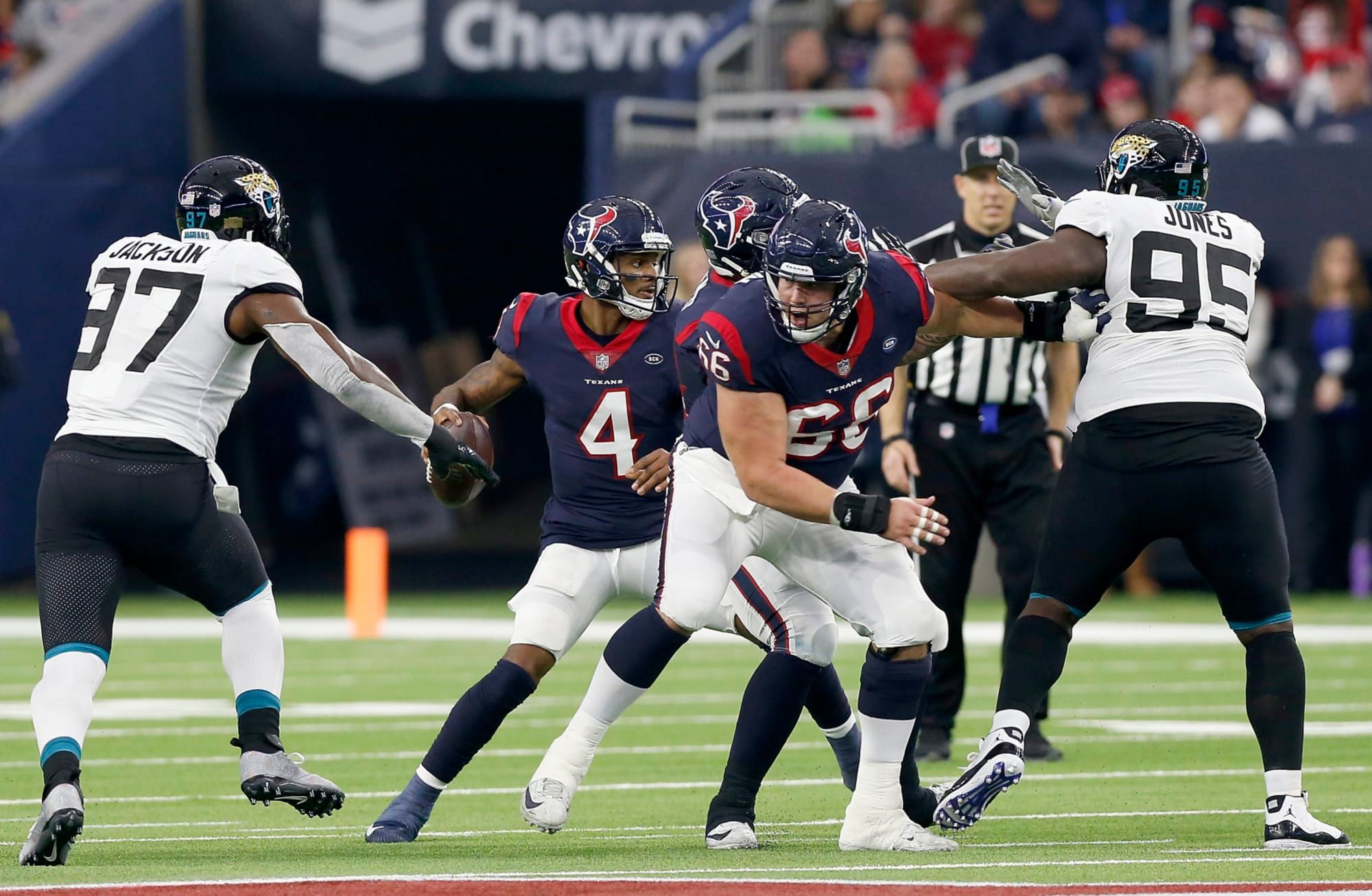 The Texans OL was really good at winning their 1-on-1 pass rush matchups. According to Football Outsiders they had the 8th highest Pass Block Win Rate (PBWR) in the NFL. Where they struggled a bit was when tasked with stunts from the defense. The left side was pretty good, as Tunsil and Scharping had great continuity throughout the season, and formed great chemistry and communication. The right side however, had some struggles, which we'll get too later in the article. But first, let's take a look at how well Tunsil and Scharping worked together.

On this first play you can see how the DT #90 is trying to get the DE #70 free by running a stunt. #90 attacks Scharping at first, then tries to hit Tunsil, to distract him and allow #70 to come free inside. This mixup is supposed to confuse OL, and could really mess with a rookie's head. But the two formed a great connection and were constantly in good communication on these stunts. Scharping passes off #90 to Tunsil, and is ready for #70 to come his way. Everything gets picked up nicely, and they don't allow any pressure.

The communication here is vital, and Scharping and Tunsil got to the point where this was second nature for them. They looked very comfortable passing these off. The first example wasn't the best execution from the Patriots defenders, but this one from the Raiders was executed nicely. DT #92 makes a lot of contact on Max first, then gets a good punch on Laremy. DE #96 comes over to Max but he recovers quickly and gets his hands out in front, ready to take on the defender. The result, a clean pocket for Watson.

This next one is next level play recognition from Scharping, and possibly the entire offense. Before the snap, you can see Deshaun Watson and Nick Martin point to the left. Just a guess, but based on how the play plays out, they could be calling out the Falcons for running a stunt. Once the ball is snapped, look at Scharping's head as it turns to the left, before the DT even gives away his stunt. He already knows it's coming and this communication from the entire OL helps greatly. He doesn't even really try to block the DT in front of him, because he knows he's not actually attacking him. He's already looking at the DE and preparing to block him. There is no confusion and if the OL can know when stunts are coming before they even happen, it really minimizes the chance that they allow pressure.

One last play to really drive home the point, and this was a more complex stunt from the Raiders. They had the DT over Max, and the DE over Tunsil slant inside, while the LB over Nick Martin loops around to the outside. This "double" slant would trick most unco-ordinated OL, but not ours. This left side was on lock all year. Look at how they pass it off nicely and Tunsil gets around to pickup the LB, not allowing any pressure. Great communication by these three, and it should be no surprise that they were the ones who constantly got to play together.

So we saw how stunts are supposed to be picked up, and how having that continuity of playing next to the same person all season can really help with communication. The left side was a strong point for us, and should only get better with even more continuity. The right side however saw a lot of change. Fulton was healthy for most of the season playing in 15/16 games. However, first round pick RT Tytus Howard unfortunately only played in 8 games. This forced OT's Chris Clark and Roderick Johnson into the mix. A huge mistake in my opinion was ever playing Chris Clark. We have seen time and time again that he is a mere stop sign, entrenched into the ground and doesn't move to try and block defenders. He is easily pushed over and brings little fight. That's enough of my mini rant on Clark, he is gone, and good riddance.

Early in the season we saw that Zach Fulton and Seantrel Henderson were not comfortable with each other whatsoever. They didn't seem in sync and the result was a lot of plays that did not look great. On this first stunt the Saints scheme it up nicely. They have #94 cross to the right, and the LB #53 comes behind him, to get a pretty clear lane to Watson. Henderson has to hold him (uncalled) because he wasn't ready for it and was in an awful situation.

Here's basically the exact same play but this time Henderson can't slow down the LB, and he gets a sack. It's the exact same concept but Henderson and Fulton aren't able to communicate well and pass it off.

It was the same thing later in the year after Tytus' injury, when Fulton had to play beside a different RT in Chris Clark. The Patriots embarrass them and neither OL block their guy. It's hard when you don't have a lot of game reps to have the chemistry necessary to stop these plays.

So now let's look at how Fulton fared with Tytus next to him. In his first game starting at RT vs the Chargers, it wasn't pretty early. This further proves my point because Tytus and Fulton had just started playing together, they didn't have the chemistry built up yet. Playing with Tytus this early in the season would be no different chemistry wise than with Henderson. So on this play, they mess up the stunt and someone comes free on Tytus' side.

However, we saw improvement throughout the season, and even throughout that first game. Fulton and Tytus pass it off nicely and hold onto their blocks long enough to do their job.

Later in the season now vs the Falcons, Tytus and Fulton were really starting to click. With more reps together they built up this beloved chemistry and communication to handle these stunts. You can really see Fulton emphasize passing off his DT to Tytus and Tytus couldn't have done anything better to help Fulton, as the DE took such a wide angle away from him. But this gives Fulton more time and space to push the DE out of the play.

Even later in the season now against the Colts, and the stunts weren't a problem whatsoever. Tytus and Fulton worked well as a tandem and the tricks that troubled them early in the season were nullified. The left side was always locked down, but now the right side was catching up.

Last one here just do drive home the point, and this is as good of a job as you can ask for. Tytus and Fulton pass off the defenders perfectly, and Tytus takes the inside rusher, allowing the LB to come free, but that's what he's supposed to do. He's outnumbered but taking the inside defender is the right call, because he has a quicker path to the QB. Thus, this is a perfect play by Tytus and Fulton against this stunt and you can see the progression they made throughout the season. With more and more continuity between the two, this will only get better. It's the main reason why Fulton was kept this offseason. Keeping him as the vet next to Tytus should hopefully reap benefits.

So now we've really seen the importance of continuity, chemistry and communication between the OL. It really works as a unit and having all 5 guys return is HUGE. We'll be able to build off of the great play we saw when Tunsil, Scharping, Martin, Fulton, and Tytus were all healthy and honestly have a top 10 OL for the foreseeable future. I'm excited for our OL to finally be a strength again.