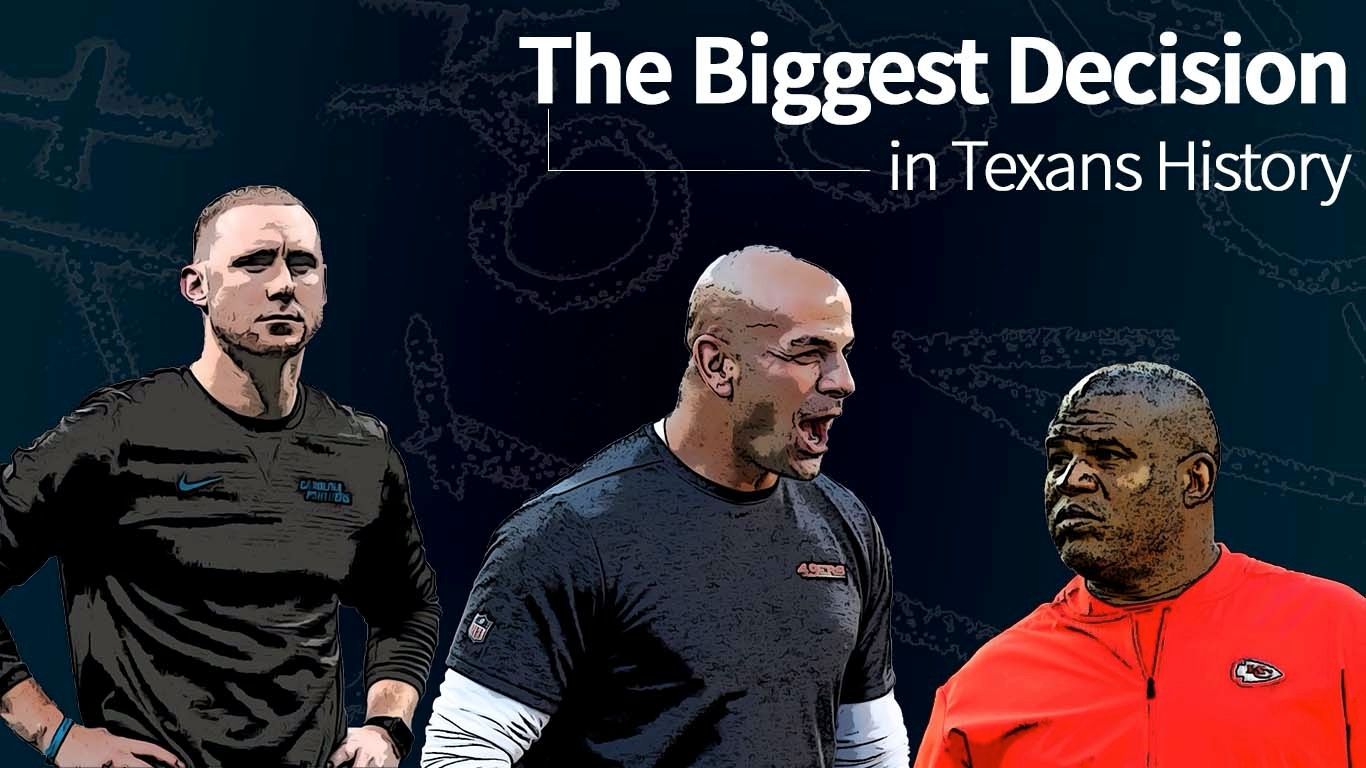 The Biggest Decision In Texans History

The Houston Texans have to hit on their hirings right with their most important player, Deshaun Watson, under contract until 2025.

The Biggest Decision In Franchise History

Three weeks ago, Cal McNair made the executive decision to let Houston Texans Head Coach Bill O’Brien go after starting the season with an underwhelming 0-4 record. You can point to quite a few factors that lead to this decision, but it ultimately came down to the team underperforming, given the talent available on offense. Now Cal and the McNair family are facing the serious task of finding a replacement, and if they make the wrong decision, they will set back the franchise worse than what it was with O’Brien serving as the head coach and general manager.

The Texans are now looking for their fourth Head Coach in franchise history, but this time around, things are different. This is the most significant decision in franchise history. When the Texans fired Dom Capers, the team had nothing to build on outside Andre Johnson. When they fired Gary Kubiak, the team only had JJ Watt to build around as the cornerstone, but when they fired Bill O’Brien, they have the most intricate piece an NFL team can ask for; a franchise quarterback.

Sure the team lacks draft capital in 2021. It isn’t in the best cap situation given the ongoing pandemic potentially affecting the league’s ability to raise the cap for the upcoming years, and the defense has seen a lot of talent walk out the door. Still, in this league, there is one position all head coaches and general managers look for when considering joining a team, and that is the state of the quarterback position.

With Deshaun Watson under center, no matter how you try to portray the Houston Texans, it is an attractive job any HC/GM would consider. Watson signed a four-year contract extension in the offseason that ties him to the franchise for the next five years after this season.

Cal needs to be aware that his upcoming decision will determine the Texans’ success for Watson’s second contract’s foreseeable future. He has to do his due diligence to find the right guys for the job, or he will be wasting the talent of Deshaun Watson, and he will not reach the expectations he has for himself or this team.

Qualities to Look For in a HC

Let’s start with the criteria the Houston Texans should look for at the head coaching position. When you look around the NFL over the last five years, we have seen so many times that the wrong hire at HC can set back the franchise for multiple years after they leave the organization. Cal just saw it this occur over the last seven years. Does he want to see that again? You have already wasted the first four years of Deshaun’s career and let many talented players walk out the door; why waste more?

This decision Cal is going to make over the next five months will have a direct impact on how far this franchise will go. They need to find somebody who will take advantage of Deshaun’s skillset, take constructive feedback from his players, build an offense around them, and have a proven track record that they can work with a quarterback of Watson’s status.

The Houston Texans can’t go down the retread path, and you know the path you hear every year an HC is fired: Bill Cowher, Gary Kubiak, Hugh Jackson, Jack Del Rio, and every other HC who has had some form of success in the league. Texans need to find the next promising coach, one that can evolve with the NFL or potentially change the landscape of the NFL. It is easier said than done, but here are some candidates that should be at the top of the list, and I will rank them in order:

The Houston Texans have several candidates to look towards to at the end of this season. Joe Brady has spent his entire life around football. He played WR in college, was the passing game coordinator for two years in New Orleans, spent some time at Penn State, was the offensive coordinator for the College Football Champions LSU Tigers, and is now the OC in Carolina.

Brady is making Teddy Bridgewater look like a top 10 QB without Christain McCaffery. He reminds me of a younger version of Kyle Shanahan, a different offensive scheme for sure, but it is more about how the league overlooked Kyle early in his career. Brady doesn’t have the experience teams look for when hiring an HC, but that doesn’t matter when considering that Mike Vrabel got his job in Tennessee with only one season as the Texans’ defensive coordinator. (The amount of impact and success they were responsible for in each place they have remains the ultimate catalyst for becoming a head coach).

Did they elevate the team they coached on? Did they evolve and adapt? Brady is someone that fans need to become familiar with. If he doesn’t get a head coaching job this year, it will be soon, and I would prefer for the Texans to take a risk now on a guy who looks to have a promising future (Brady is only 31).

The hottest name in the NFL right now for any team that is looking for an HC. Eric Bieniemy has also spent his entire life around football, playing running back in college, and has in the NFL for nine years. He came into the NFL coaching circles as an RB coach for the Minnesota Vikings from 2005 to 2010 before becoming the offensive coordinator for Colorado’s college football program.

During his time in Colorado, his offenses ranked 80/124, 109/124, 120/124. His offenses were not great, and if we are honest, they were awful based on statistics as out of the three seasons he was in Colorado, they only averaged over 20 points per game for one season and was still ranked as the 80th offense in college football.

Andy Reid in 2013 brought in Bieniemy as their RB coach for the next five years before promoting him to OC. In his first season as the offensive coordinator, the Chiefs ranked 5th in total offense, 5th in passing offense, and 23rd rushing offense in the NFL.

Jeff Allen and plenty of other former players have given their seal of approval of Bieniemy getting a promotion, but how much is Bieniemy responsible for KC's success? His offense took a step back in 2019 compared to 2018 and had similar stats in 2017. Is he a product of Andy Reid’s scheme?

It’s understandable to covet a Chiefs’ coach given their success in the league over the last couple of years, but is this a risk that will ultimately pay off and be the right hire for Deshaun Watson? (Texans hired a coordinator from the New England Patriots and looked how it panned out).

I don’t believe Eric Bieniemy is the guy. After researching what he has accomplished as a coach, I would instead take a risk on a guy like Joe Brady, who has positively impacted every team he has been a part of, but has a shorter resume.

Multiple teams have passed over Bieniemy, so the search firm (Korn Ferry) will certainly take that into consideration and do their own due diligence if he becomes a potential finalist for the Texans.

Brian Daboll isn’t a spring chicken, but like the other two, he has been around football most of his life. When considering Daboll, it was primarily on what we have seen with Josh Allen. Since Allen came into the league, he has taken a step forward in his development, which isn’t something witnessed frequently with young but raw talented prospects in the NFL.

But after looking at his coaching resume, there are some concerns. Daboll came into the NFL coaching ranks with the New England Patriots as a Defensive Assistant. After one year, he took over as the WR coach in NE and did so for four years.

He left Foxborough for the New York Jets as the QB coach then bounced around the NFL as an OC for the Cleveland Browns, Miami Dolphins, and Kansas City Chiefs (under Romeo Crennel). As an OC for those teams, you didn’t see much from Daboll’s offenses.

You could look at his QB’s and say that is the main reason they were terrible, but you would also think that if he were an offensive genius, he would at least be middle of the pack, but that was never the case.

It wasn’t until this season that Allen entered the race as an MVP candidate. His case isn’t the strongest by any means, but he checks the boxes from an experience standpoint and has turned some heads with what he has done in Buffalo with Josh Allen.

The Sleepers and Other Intruiguing Candidates

Given what we have seen in the NFL, finding the QB is hard but pairing him with the right coach to ensure you get the most out of your QB is a lot harder. The Texans find themselves in that very position.

After wasting Deshaun’s rookie contract over the last four seasons and impacting his development with a headstrong HC, who tried to shape Deshaun into being something he isn’t, Cal has to ensure this next decision is the right decision. If he misses, They will have wasted the golden years of Deshaun’s career.