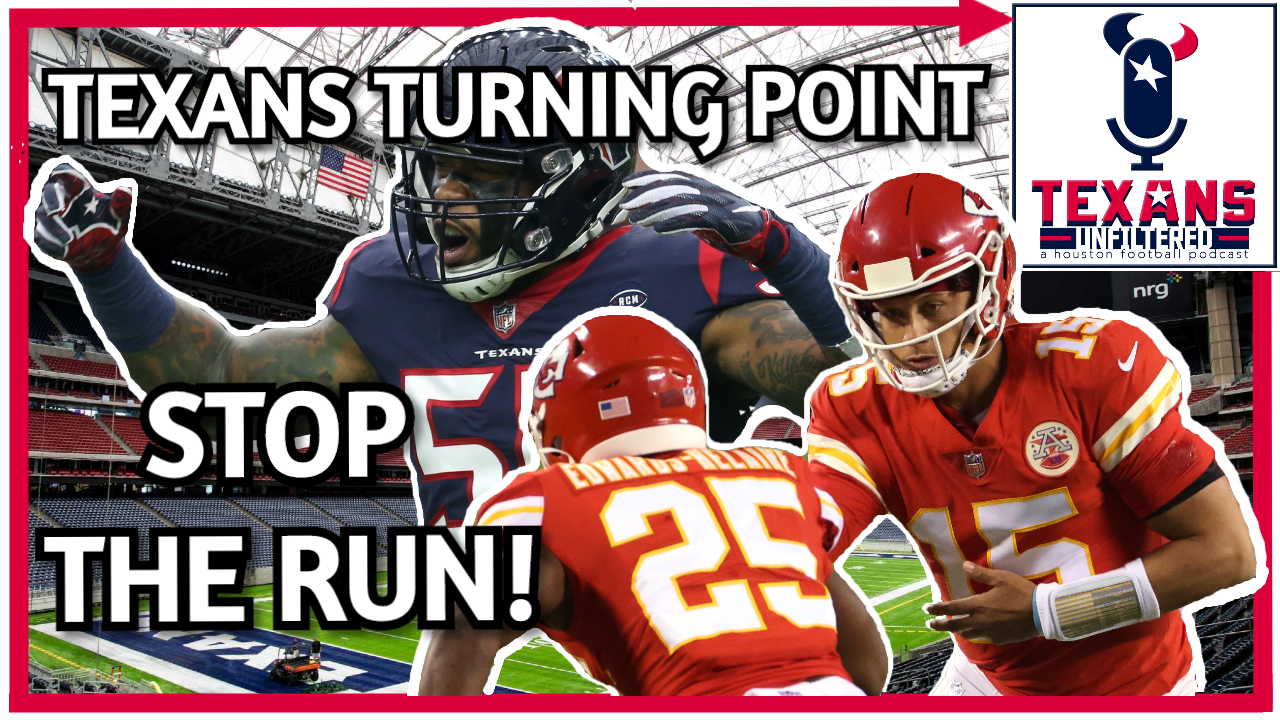 The Houston Texans 2020 season opener vs the Kansas City Chiefs was not what every Texan fan hoped for. One thing I did not expect to see, was the Chiefs dominate on the ground. So, let's take a look at both run games, and the turning point in the game, where everything went wrong. Make sure to check out the YouTube breakdown (linked at end) complimenting this article!

Before we get into the true turning point, let's first relish in the potential this offense's running game has. Potential, however, is the key word, as for most of the day, the Texans offense was extremely erratic. First drive, 3 and out. Sigh.

Next drive, 9 plays and a TD, with no incompletions or negative yardage. Yay! The ball was spread around to 4 different targets, and David Johnson started off his "comeback" campaign by scampering into the end zone. Then, the offense wouldn't score until FIVE offensive drives later. NOT UNTIL THE FOURTH QUARTER!

"Tim Kelly is nothing different than BOB", We are wasting Deshaun's career", "How does the OL still look this bad". Again, all valid concerns, and thoughts that flew through my mind Thursday night as well. However, the offense showed serious signs of promise early on, that can be built off of. On our second drive, we would get to really see the potential benefits of our hyped 2- Running Back sets. Lined up in 21 personnel (2 for Two RBs, 1 for One TE) with Cooks and Fuller on the outside, and the Johnson's in the backfield. We run power to the left, where Fulton (#73) pulls left, and Fells and David J. act as secret service for Duke J. The Chiefs bring Tyrann Mathieu down into the box, which usually causes issues for offenses. But look at David (#31) block him with ease (something Darren Fells couldn't do...) He nullifies the Honey Badger and the rest of the OL looks PERFECT. Laremy Tunsil (#78) works to the second level to attack the LB. Fulton (#73) blocks Frank Clark (#55) the unblocked EDGE that Tunsil left. Darren Fells (#78) gets contact with Safety Daniel Sorenson (#49) for juuuuust long enough for Duke to accelerate to the edge and gain 7 yards.

The running game was efficient all night. The team finished with 22 carries for 118 yards, averaging out to 5.4 YPC. David was particularly impressive with 11 rushes for 77 yards and 1 TD. He's been put in the best situation of his career, and matched that with being in amazing shape, which has helped him put up a STATEMENT game. Let's take a look at his rushing TD, and particularly his vision, footwork and cutting ability. These three traits were what made him so damn effective, particularly back in 2016 when he had his career year. He was able to sift in and out of traffic with ease and grace, back then. His cutting ability was reminiscent of Arian Foster. And Thursday night, watching him weave through multiple Chiefs defenders, it would be hard not to see Feeno.

The Texans run Randall Cobb (#18) and Darren Fells across the formation to the left. On this RPO, they can hand the ball off to David, Deshaun can pass it, or run it, using Fells and Cobb as blockers. Since LB #51 stayed home, and didn't crash downhill, attacking the RB, Watson handed it off to David, correctly reading the play. Since #51 didn't crash down, the Texans are able to use their numbers advantage to get to the second level. Nick Martin is able to cut off the angle of LB #54, and push him away from David and out of the play. He makes a cut to embarrass the Safety and leave him in the dust. Accelerating around the edge and finding the pylon for six.

That was an impressive cut, but the one at the very beginning of the play, was my favorite. Max Scharping (#74) gives up initial pressure, and instead of just getting tackled for a loss, David jump stops and hops away from trouble. That quick reaction allowed him to keep the run alive. His past two years with the Cardinals, he wasn't able to make that same cut. Instead of a hopping around like a bunny, David would take multiple steps to make a cut, not nearly as smooth and effective, as now. I'm so glad to see his cutting ability has come back, and that is a very promising sign for his 2020 outlook. His vision finding the holes in the trenches was beautiful, originally cutting left, then back right and upfield, maximizing his yardage.

I was honestly a bit surprised that David Johnson only got 11 carries the entire game. One, because he was effective, but Two, because it seemed like we ran it a TON. The biggest malpractice of his usage came in the third quarter. We ran the ball 5 out of our 8 plays on that drive. Seems like a plausible solution, seeing as the running game was efficient, right? Wrong. We totalled 14 yards on those 5 carries, for just 2.8 YPC. Even worse, WE WERE DOWN 24-7, getting the ball with 9:57 left in the 3rd. We took a good 4 minutes off the clock, by running it and the offense having little sense of urgency. The end of the half and the first drive of the 3rd quarter was the biggest turning point of the game, and one that I will detail through a Youtube video breakdown. If you want to see the turning point that led us to losing this game, check out the video: https://www.youtube.com/watch?v=bIW1xc5YObk

What are your thoughts on the game? Are you worried this is a sign for the rest of the season? Let me know and be on the lookout for future articles!