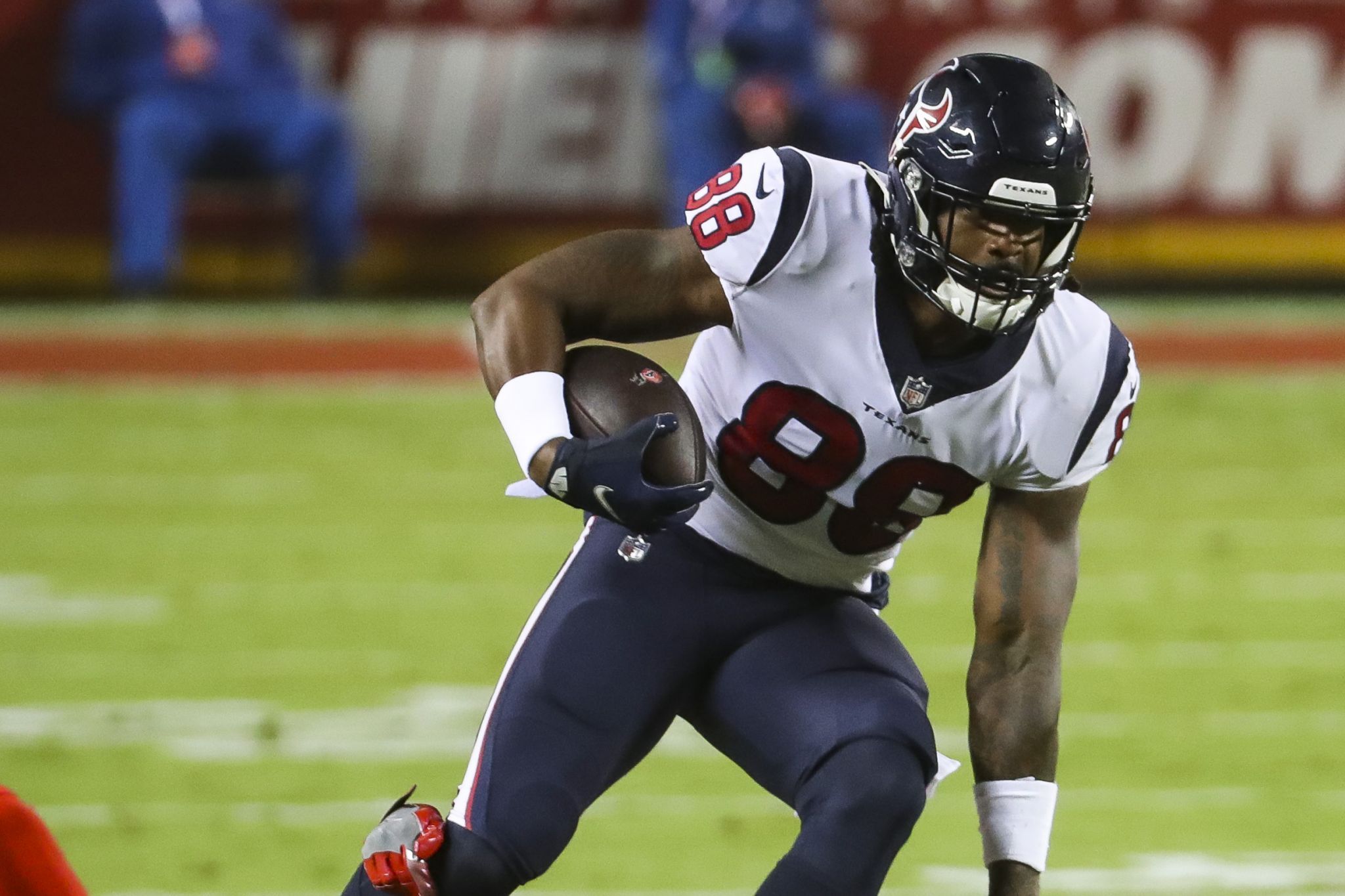 Texans I'm Thankful for VS the Patriots

With Thanksgiving on the doorstep, I wanted to write about three Texans who had underrated performances vs the Patriots, that I’m thankful for. These players were sort of hidden gems. They weren’t the turkey, the stuffing, or the pie, that would be Deshaun Watson, Justin Reid and J.J. Watt. However, they took the important roles of the side dishes – the mac and cheese, mashed potatoes and green bean casserole. Jordan Akins, Bradley Roby and Roderick Johnson, each played complimentary roles to help the Texans get the W. Let’s take a look at each of their contributions.

Akins has stepped into the TE1 role nicely for the Houston Texans. While he’s been injured for 3 games, if you take his current stats and project them over a 16-game sample size, he would garner 50 catches, 629 passing yards, with an 85% catch rate and a career high 10.6 yards per target.

His athleticism has always been his calling card, and it was on full display Sunday vs the Patriots as he smoothly glided down field. He finished with 5 catches on 6 targets, for 83 yards and 16.6 yards per reception. It didn’t matter who the Patriots lined up to defend him, Akins was constantly open.

Early in the game, on the Patriots 25-yard line, it was 3rd and 10. The Texans have struggled to finish drives this year, ranking 21st in red zone efficiency (before Sunday), but Akins would make sure that wasn’t the case anymore. Jason McCourtey was tasked with defending Akins, as the Pats likely wanted a speedier defender to try and keep up. He could not keep up.

Akins runs a deep over route, and there’s nothing fancy about the route, but man is it smooth. With McCourtey (30) in off coverage, Akins just trusts his speed and makes a break for the sideline. The 22-yard catch set the Texans up at the 3-yard line, where they would Deshaun would promptly throw a TD to Randall Cobb (get healthy soon!).

In the 2nd quarter, Akins would come up clutch on 3rd down yet again. He’s tasked with another deep over route and is this time matched up against stud rookie Safety, Kyle Duggar. He’s looking to get into Duggar’s (35) body, push off slightly, then accelerate downfield and give Watson an option over the middle. He does just that, and while it’s a bit of a longer developing route, Watson throws with nice anticipation. He doesn’t wait for Akins to pass Devin McCourtey (32), instead, throwing it over his head and right on the money.

Many fans have long been clamoring for Akins to get more opportunities down the middle of the field, past the LBs and in front of the Safeties. I don’t know what took so long, but Sunday was a sight for sore eyes.

On the Texans 2-minute drill to end the first half, Akins got them in prime scoring position, with another chunk play. This time matched up against sophomore CB, Joejuan Williams (33), who is a hulking 6’3, 212 lbs, Akins gives him the business. He’s running a post and again does well to get into the defender’s body, this time he extends his arm out and pushes Williams a good 3 yards off of him.

He simultaneously makes his cut towards the big white number 30 painted on the field, and Watson squeaks a throw through a tight window, to find Akins. The athletic TE runs for another 9 yards of YAC, a specialty of his and something that’s helped the offense become more dynamic.

This got the Texans down to the 18-yard line, and after an annoying penalty that cancelled out a beautiful TD play, Deshaun would find Keke for six. While Akins didn’t find the end zone on Sunday, he played a pivotal role in setting up others for success and extending drives. He’s played his complimentary role so well this year, and has been a valuable side dish for the feast.

Bradley Roby has played some of his best ball this season, for the Texans. While the secondary, particularly the CBs, have been a hot mess, Roby has been sticky and steady in coverage. He’s on pace for 11 PBUs, 2 INTs, and is allowing a career low in yards per reception, at just 7.7. That 3 year, 31m dollar contract he signed this past offseason is looking great for both sides.

His play vs the Patriots was consistent with what we’ve seen all year. After the Texans first touchdown, the Patriots were driving downfield, looking to respond. Getting to midfield, on 2nd and 10, Roby made his best YOU SHALL NOT PASS impression.

In off coverage vs WR Donte Moncrief (14), Roby shows off his ability to click and close, a trait the Texans love to have in their CBs. Roby backs up and gives about a 10 yard cushion, but there’s a very big distinction between how Roby plays off coverage, and how the other Texans CBs play off coverage. Usually, Hargreaves or Gaines will continue to backpedal, even if they already have a 10-yard cushion. This is usually how it’s taught, but it can put the CB in a horrible position vs underneath routes, like a hitch.

That’s exactly what Moncrief is running here, to take advantage of that cushion. However, Roby doesn’t backpedal, instead he stands his ground and when he sees Cam start his throwing motion, he flies downfield. That acceleration by Roby is elite, and he dives, extends his arms, and gets two hands on the ball, nearly securing the INT.

That PBU forced the Patriots into 3rd and 10, where the Texans were able to get off the field, holding the Patriots off the scoreboard.

Roby wasn’t just making an impact in the passing game though, he was sound in the run game, being the force player on the edge. On a pivotal 3rd and 1, Roby again makes an impact play. The Pats try to get to the edge and run a toss play to Rex Burkhead. The blocking looks great as Reid, Mercilus and Adams each get picked up. The Patriots even have an offensive linemen (76) out in front, in good position to block Roby.

However, we see Roby’s aggressiveness in driving downfield yet again. He beats the offensive linemen to his landmark and dives low at Burkhead’s feet. Roby looks like a heat seeking missle, with his target locked on Burkhead. The result? A TFL and the Patriots are forced to punt, on 4th and 2.

Later in the game, on the final drive, the Patriots were down to our 30 yard line, but Roby sparked our defensive stand, to win the game. On 1st and 10, he set the tone by preventing what looked like an easy catch.

Again in off coverage, this time vs WR N’Keal Harry (15), Roby uses his acceleration to catch up to Harry on the slant. Again, he doesn’t backpedal, which would’ve put him in worse position to make a break on the ball. He’s aggressive and cuts as soon as Harry does, look at the closing speed, that’s not a quality that any other CB on the Texans possesses. He’s able to recover back into the catch point and force a contested catch out of Harry, which he fails to do.

Three plays later and the Texans defense finished off the drive, holding the Patriots out of the end zone, and securing the W. Just like Akins, while he didn’t directly make a game winning play, he consistently helped set up the Texans for success.

The last underrated Texan that I’m thankful for is Roderick Johnson. With Laremy Tunsil and Tytus Howard manning down the tackle positions, Johnson hasn’t been needed. But I admire how he’s stayed ready and when his name was called, he answered the bell.

He played a solid game overall, and helped give Watson some of, if not, THE best pass protection he’s had all year. The Texans didn’t give up a single sack, and I can’t remember the last time that happened. The Patriots do not have a good defensive line, but it was still great to see Rod step in and do his job.

Johnson’s strength is apparent in pass protection. When he’s able to get his hands on you, it’s over, and I love the physical nature he blocks with. He’s going to keep fighting until the whistle is blown, and will put defenders in the dirt.

Take this rep vs Chase Winovich (50) for example. Winovich get’s his left hand into Rod’s (63) shoulder, but Rod counters by shooting his own left hand into the chest of Winovich and getting his right arm underneath Winovich’s left arm. This technique completely stalls the defender, but the rep isn’t done there.

Despite already building a nice wall for Watson, Rod isn’t done. He throws WInovich to the ground with zero remorse. That physicality can be contagious along the offensive line, and certainly discouraging for opposing players.

Rod also flashed his talent in the run game. That same level of “nasty” showed up on this rep where he completely drives his defender out of the play, and 5+ yards downfield. The Texans are running zone to the right, and it’s imperative that Rod get’s across the DE’s (91) face, to maintain good leverage.

He does just that, and also resets the LOS by mauling 91 backwards. He shoots his strong hands into the chest of the defender, extends them out and drives his feet so that he generates maximum power. The overall result of the run is not what you would like, but analyzing Rod’s rep alone and you’ve got to be happy.

The other area that Rod excelled in was the screen game. Shoutout to Matt Weston of Battleredblog, but he pointed out that Rod made two great blocks on the “alley” defender. The Texans have long struggled with the screen game, but Rod helped us gain 20 and 10 yards on these two screens below.

At 6’6, 306 lbs, it’s rare to see a giant like him, have the quick feet necessary to make these blocks. Getting out in space and at least making contact on these defenders is pivotal for a successful screen game, and it was a refreshing sight to see.

Like Akins and Roby, Rod didn’t decide the game, or make any major game altering plays, but he played a complimentary role that every team needs. I’m grateful for these three players, and the entire Texans team. Even though this season has not gone as we all wanted, I’m thankful for football in general, and I’m thankful we’re not the Jacksonville Jaguars. Happy Thanksgiving everyone, enjoy tomorrow!