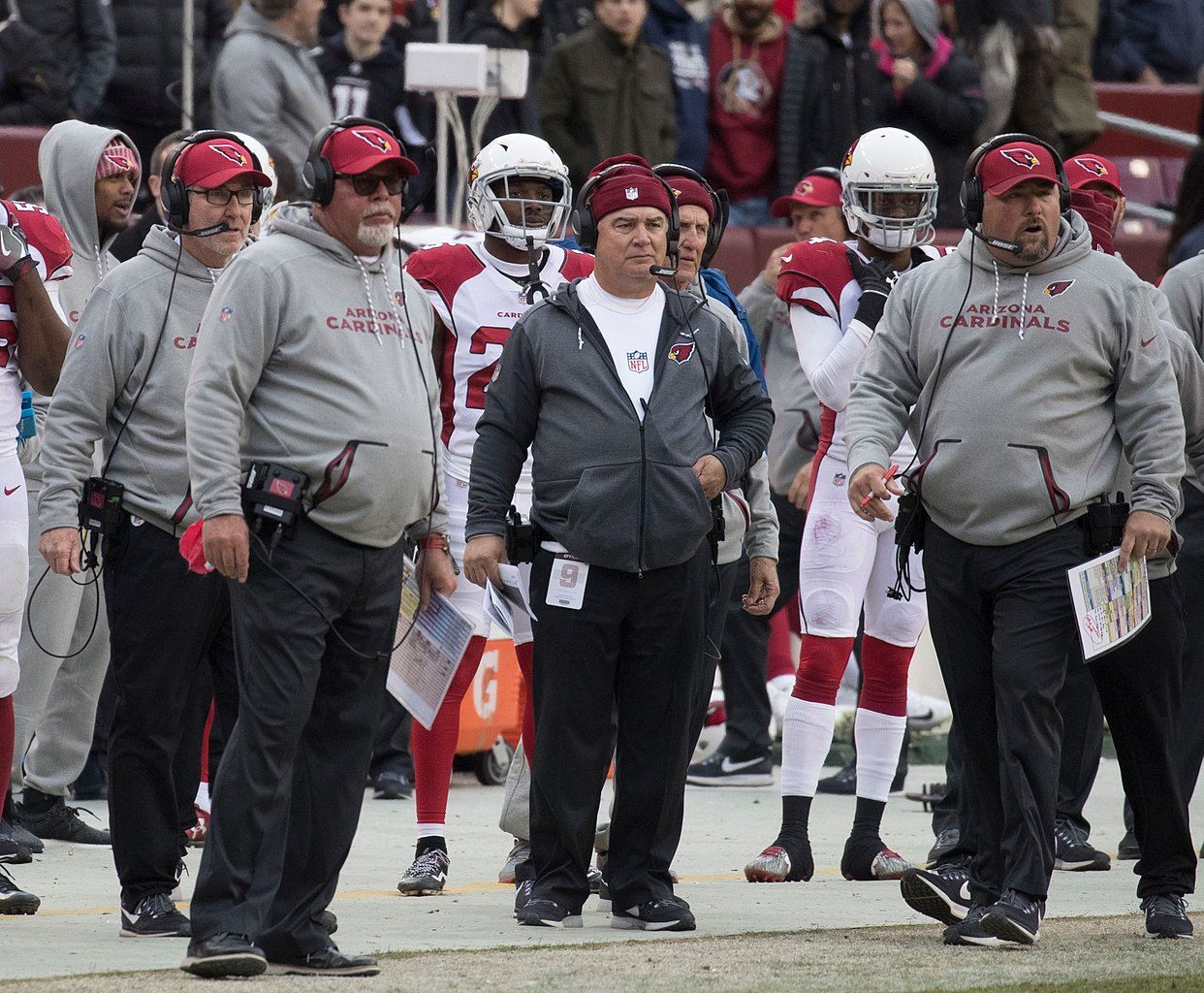 The NFL is a copycat league and any team that doesn't adopt other opponents' tendencies or brings in players to help them execute successful concepts from other teams is doing themselves a disservice.

We highlighted how the Texans slightly altered their personnel heading into this season and included similar concepts of the Los Angeles Rams offense that head coach Sean McVay successfully ran in 2018. The Texans have a deep wide receiver group that is important for any offense to be successful, but Houston also possesses two talented three-down backs in David and Duke Johnson.

Having two competent backs is something completely foreign for the Texans after they have struggled in finding a half back that can be a threat on all three downs on offense since Foster was waived in 2016 due to an unfortunate Achilles injury,

Houston utilized Foster differently under O'Brien as another receiver. It resulted in a career-high five touchdown receptions in 2014 to go along with 327 receiving yards, an average of 8.6 yards per reception.

That 2014 season was no fluke as he started the following season hot in the passing game. Foster had 227 receiving yards, 2 touchdown receptions, and averaged 10.3 yards per reception through the first four games before his season-ending injury against the Miami Dolphins marked his last game in a Texans uniform.

In a crazy coincidence, the Texans witnessed their successor's best game in Lamar Miller as he finished that particular game with 175 rushing yards, a rushing touchdown, 66 receiving yards, and a touchdown reception.

The Texans ended up signing Miller the following offseason with the idea of having him seamlessly replace Foster as the lead back, but it didn't take long to prove the transition wasn't going to be that easy. Miller had a total of five touchdown receptions in his three seasons in Houston and struggled to be the running back that Foster was here in Houston.

Houston attempted to replicate the previous success they had in the passing game by incorporating a receiving running back in former 2016 fourth-rounder Tyler Ervin, but a torn patella injury squashed that plan before it gained any real traction.

With Ervin struggling to make an impact and being waived, it left Miller all alone in trying to be an all-purpose back for the Texans. Miller's struggles were evident at times, and he was entering the final year of his four-year deal with a lot to prove.

The Texans needed a big year from their lead back, who only had one 1,000 yard season since arriving in Houston in 2016.

Unfortunately, Miller's ACL injury in the preseason against the Dallas Cowboys concluded his time in Houston and it resulted in the Texans trading for Carlos Hyde. This trade led the Texans into a Bruce Arians' rabbit hole as Houston already acquired another running back with ties to Arians' coaching staff in Duke Johnson.

Hyde and Johnson were coached by Freddie Kitchens while they were with the Cleveland Browns. Kitchens was best known for being a long time disciple from Arians' coaching staff. Kitchens was also a coach that O'Brien was familiar with and praised how he helped Baker Mayfield in his rookie season.

"Freddie Kitchens is doing a great job with him. I know Freddie. Freddie is a really good football coach. He has really made a big difference for him. He is doing a really good job. Baker is really playing at a high level.”

Alas, Kitchens and Mayfield weren't able to replicate their first-year success the following season, but that doesn't make him a bad coach when it comes to X's and O's. There a lot of things that play a part in the overall success of a team.

Kitchens came from an impressive lineage of coaches as an LSU graduate assistant under Nick Saban and an assistant under Bill Parcells' coaching staff with the Cowboys. If there is one thing that Kitchens and Arians proved, it is that they can get the most out of the running backs in their system. Kitchens' work with Cleveland's running backs was impressive as Nick Chubb finished with 996 rushing yards in his 2018 rookie season.

So acquiring Hyde and Johnson wasn't a surprise after Houston had shown interest in Arians and Kitchens' running backs in the past when they brought in Andre Ellington towards the end of the 2017 season. Ellington wasn't put in the best position to succeed with a short amount of time to learn the offense and Deshaun Watson already lost for the remainder of his rookie season due to an ACL injury.

Despite that, Ellington raised eyebrows in his short time in Houston when he was forced to play receiver when Will Fuller, Braxton Miller, and Bruce Ellington were sidelined against the Tennessee Titans in Week 13. Ellington lined up in the slot despite signing to play running back for the Texans. But he impressed in that temporary role by finishing with 56 receiving yards on five receptions.

Ellington wasn't resigned after the season concluded, but the blueprint was set; find running backs that can impact the game on all three downs.

It took time for Houston to find a running back tandem they were comfortable with, but having ball-carriers with a coaching background from Arians and Kitchens seems like a low-risk high upside plan. Houston combined that aforementioned blueprint in 2019 with Hyde and Johnson.

Hyde responded for over 1,000 rushing yards for the first time in his career. Meanwhile, Hyde's limitations as a two-down back in the offense opened the door for Johnson's receiving prowess to be used on third-down passing situations.

Acquiring Duke Johnson for a conditional third-rounder paid off for O'Brien and the Texans in the passing game. Having a running back that can catch and contribute in the run game opened the playbook for the Texans.

One trait that three of the four running backs possess is their plus ability to catching the ball. Since Houston struggled to find a running back that could do that for them, they went shopping for the teams that had a precedent of using their backs in the passing game.

Arians and Kitchens both have a history of finding good players to plug into their high octane offenses. Former Cardinals' tight end Darren Fells was a role player in Arizona before breaking out in Houston as a red zone threat with 7 touchdown receptions. Now, David Johnson is expected to add another wrinkle to the Texans offense.

The biggest pushback I've heard is that David Johnson is no longer that premier back, but there really is no reason to believe he can't be at least 85% of the player he was in Arizona. Johnson will have Deshaun Watson, and a solid offensive line to take the pressure off him on from carrying an entire offense.

Arians was vocal on the TD Podcast interview of how Johnson was being misused in the offense after briefly retiring in 2018. "I just don’t like the use of David Johnson in this offense. David Johnson is a premier wide receiver and I don’t see him out of the backfield creating the mismatches that he should be out creating and opening up things for Larry Fitzgerald."

He went to elaborate on how Johnson created mismatches for everyone and opened up the offense for others. “David Johnson, people didn’t realize, he opened up stuff for Larry Fitzgerald because he was used in the slot opposite, or we always put him in position to be opposite of Larry and pick your poison,”

Johnson echoed his former head coach's sentiment with how differently he was being utilized after Arians' departure. “Two different coaching styles. I’m not being split out more but I’m doing routes out of the backfield, being utilized that way. Like I said, the offensive scheme is different."

“I think coming out of the backfield actually, I feel like I’m more likely to have a linebacker on me compared to being split out.”

Arians loved Johnson in his time as the head coach in Arizona and thought extremely highly of him. He even went to the measures of comparing Johnson to Marshall Faulk in 2016. "I coached Marshall Faulk so I kind of know a little bit about him," Arians said. "What we asked him to do and what we ask David to do and Andre Ellington. We look for guys who are multi-threat backs, three-down players who don't have to come out of the game, who are very good in the passing game, pass-blocking, and running.

The comparison seems a bit rich, but Johnson still has a special skill set that can be taken advantage if used correctly.

The question still remains for a lot of people. Why did the Texans want David Johnson included in the DeAndre Hopkins trade? Well, for one that was one of the better deals available in the moment with a high second-rounder that would net a Houston a first-round prospect in Ross Blacklock. Texans had been talking with other teams, but Adam Schefter of ESPN reported that teams like the Philadelphia Eagles were hesitant to give significant assets given they would have to give him a big contract.

At the same time, the Texans were shopping Hopkins, it was also known across league circles that Johnson's future was going to be determined very soon after Kenya Drake was resigned.

Knowing how highly Arians viewed Johnson and how successful they both were together, what were the odds that David would've chosen Houston over Tampa Bay if he was waived by Arizona?

The Bucs interest in Johnson seemed to exist, so it seemed obvious O'Brien wasn't going to take the chance that the running back he had his eyes would spurn him for his former head coach in Tampa Bay.

Whether the trade will pay off for Houston will be determined very soon. This trade will continue to be a heavily scrutinized move from the Texans' perspective, but there was a certain method to the madness.

Texans got their running back. That's all that matters from within the organization, and it'll be interesting to see how it pays off. Johnson's deal is only partially guaranteed in 2021, so Houston will have the option to evaluate his fit in the long term beyond this season.

But Houston has two backs that can do it all for the offense. It'll certainly be interesting to see Deshaun Watson have much-needed help in the running game and explosive check-down options for this upcoming season.