Houston Texans Safety Justin Reid is one of the key building blocks for this franchise. He had an extremely promising rookie season, and had a great sophomore year as well, especially when you consider he played through a tough shoulder injury all year. Now fully healthy, I expect J Reid to ball out and have a breakout year. His ability to cover all over the field, and be our best tackling DB, cannot be understated. Let's dive into his 2019 film. 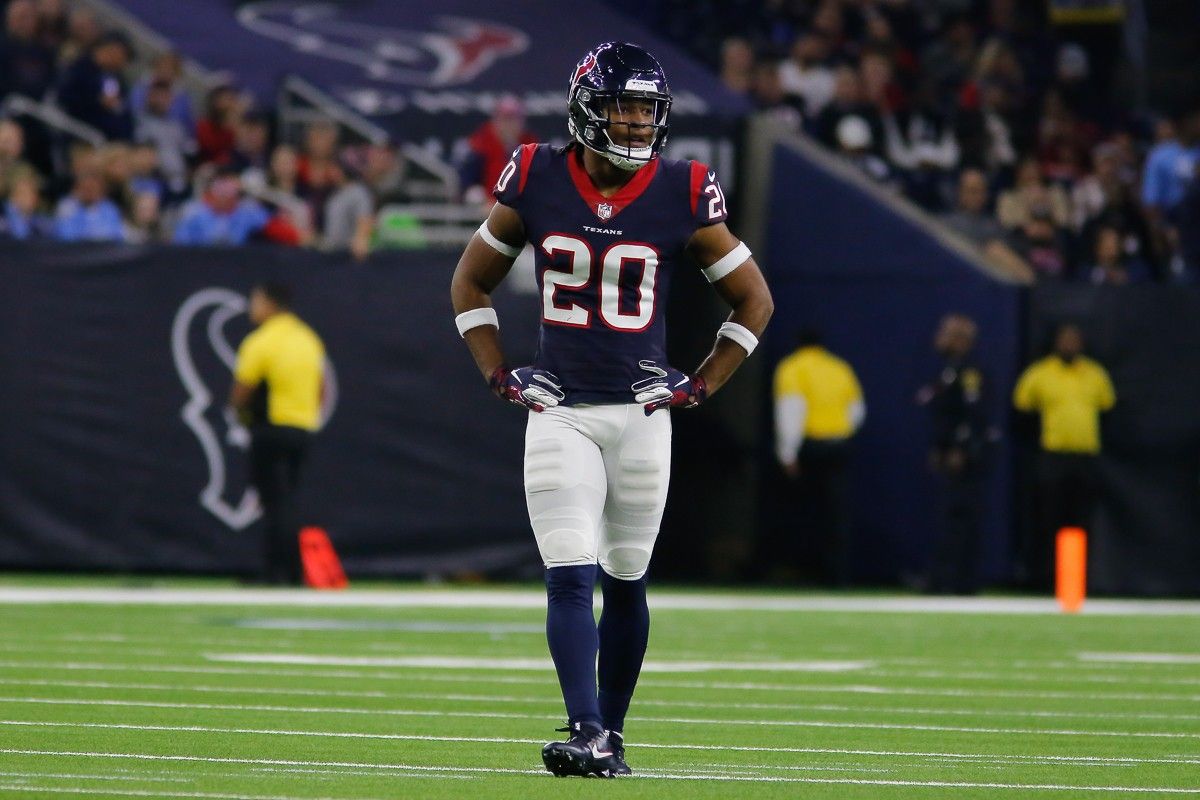 The biggest part of J Reid's game that we will need to rely on is his ability to play single high safety or not. We've transitioned to a more Cover 1 heavy scheme, and the single high safety is the MOST important position in that scheme. Reid and Gipson traded off that responsibility last year, but that won't be the case with Eric Murray, who needs to be in the box to succeed. I will admit I wasn't entirely confident in J Reid's ability to thrive in this role, but after watching his 2018 and 2019 tape, I'm confident in his ability. He won't be Earl Thomas and rack up the INTs, but that's fine. He's never going to let someone behind him, always going to make game saving tackles, and will show off good range to make a play on the ball on occasion.

Let's look at his INT in single high last year. On this play he reads QB Gardner Minshew's eyes and runs toward where the throw is going. He's in position if we miss a tackle, to clean it up. But the throw is off target and lands right in Reid's lap. He's someone who is always going to be in the right position, and capitalize on any mistakes.

This play shows off some really good range and instincts by J Reid. He reads this play all the way and knows that Mahomes is going to Tyreek Hill. He gets all the way to the sideline and catches the ball, but just barely couldn't get his feet in bounds. He's shown the ability to occasionally make these absurd reads like this, hopefully we can see it more.

More damn good range by Reid here. He bites to his right but then speed turns back around to his left and chases down the play. He erases JJo's mistake of getting burned and flies back into the play to stop the touchdown. Ridiculous range here and Reid's speed is on full display. Freaky ability right here.

One more play here in single high and I love how aggressive Reid is here. He usually plays things a bit more safe, but you could tell he just wanted to make a play here. He sees Julian Edelman coming open, so he hauls ass downfield and undercuts the route perfectly. He just barely drops the INT but this is an amazing play.

While I think J Reid will succeed as a single high safety, we will likely still play a lot of two high coverage, just to switch things up and not be predictable. You can see J Reid's great range in two high coverage as well. Playing a deep half of the field, Reid is able to make it to the sideline and could've had an INT if the throw was accurate.

Reid was great in covering the deep ball, but he was really good in covering shallow crossing routes as well. Watch how he reads Drew Brees and comes downhill to take away the slant to Michael Thomas. His ability to know where the offense wants to go, and take away their number 1 option is big time. Love the aggressive nature here.

A very similar play here where Reid comes downhill quickly to take away a route over the middle of the field. He does this on a consistent basis and it's not something that every two high safety does. His ability to cover any area on the field is remarkable.

To further push home the point that J Reid can play anywhere, let's see how great he was in the box. I really love him here and think this is where he could have the biggest impact. I love him closer to the ball where he can lock down TEs, make impact tackles in the run game, and blitz the QB. It's why I really wanted us to go after a true single high safety, like a Grant Delpit (yes, I'm still hurt). But, hopefully we can rotate Reid into the box again this next year, and see him flourish.

J Reid's other INT in 2019 came in Cover One, as a robber role. He reads Jameis Winston's eyes perfectly and undercuts the throw for the INT. This was just great reading and reacting and putting himself in a perfect position to succeed. And then look at the return skills by Reid. This one was called back but he's going to have a lot more pick sixes in his career.

Reid's man coverage ability is super valuable. He locked down TE Darren Waller in this game, who had been lighting up the league. His speed really helps him here as you can see at the top of the route, he looses a little bit, but he's able to recover and get back into the play, and break up the pass.

His great coverage won't always show up in the box score. There are so many plays like these where he just blankets the TE and is all over him, not even allowing a target. Look at how fluidly Reid cuts with the TE. He starts outside, then goes inside and Reid is right there, running the route for him.

More great ability to break on the ball and make a play. Reid's downhill speed and aggressiveness is perfect in this role. Not much else to say here, just yet another great play.

So we've looked at J Reid's coverage ability and how versatile he is to play in different schemes, the other big part of his game is how sound of a tackler he is. As a single high safety, he's great at saving big plays from being even bigger, or possibly a TD. One example can be seen here against the Chiefs where Reid chases down the play and saves a TD, as we had no other defender near the play.

One of the highlight plays of the season was purely due to J Reid's strong tackling ability. On the goal line he saves yet another touchdown with this bone crunching hit. His burst and acceleration to fly towards the ball is amazing. He literally saved so many points from being put on the board, it's crazy.

That big hit is a good segway to talk about J Reid's big hits. He brings some serious thunder and we didn't get to see as much of that in 2019 because of his shoulder, but 2020 should bring those big hits back. On this play he delivers such a big blow that he forces an incompletion. Such a valuable skill out of a safety.

J Reid is also really great at diagnosing "trick" plays and making a tackle. Look at these next two plays and how Reid reads it quickly and stops a big play from happening. As a safety you need to be able to diagnose plays quickly, and I would put money on the fact that J Reid is the smartest guy on the field.

The last aspect of Reid's tackling I want to talk about is his ability as a blitzer. He's so good at timing his blitzes and his speed gets him to the QB so quickly. Rex Ryan loves to blitz DBs and I bet Anthony Weaver will as well. Look at these next two plays where J Reid is the sole reason we forced an incompletion and short pass.

In review of Justin Reid's 2019 season we saw that he was a BALLER. His coverage ability in multiple schemes makes him such a versatile safety and his sound tackling makes him a true complete player. He's a do it all defender and true leader and great communicator. His ability on the field is remarkable but he's also a great person off the field. It's hard not to love J Reid and I'm excited to see his 2020 season, and hopefully rest of his career in a Texans uniform.