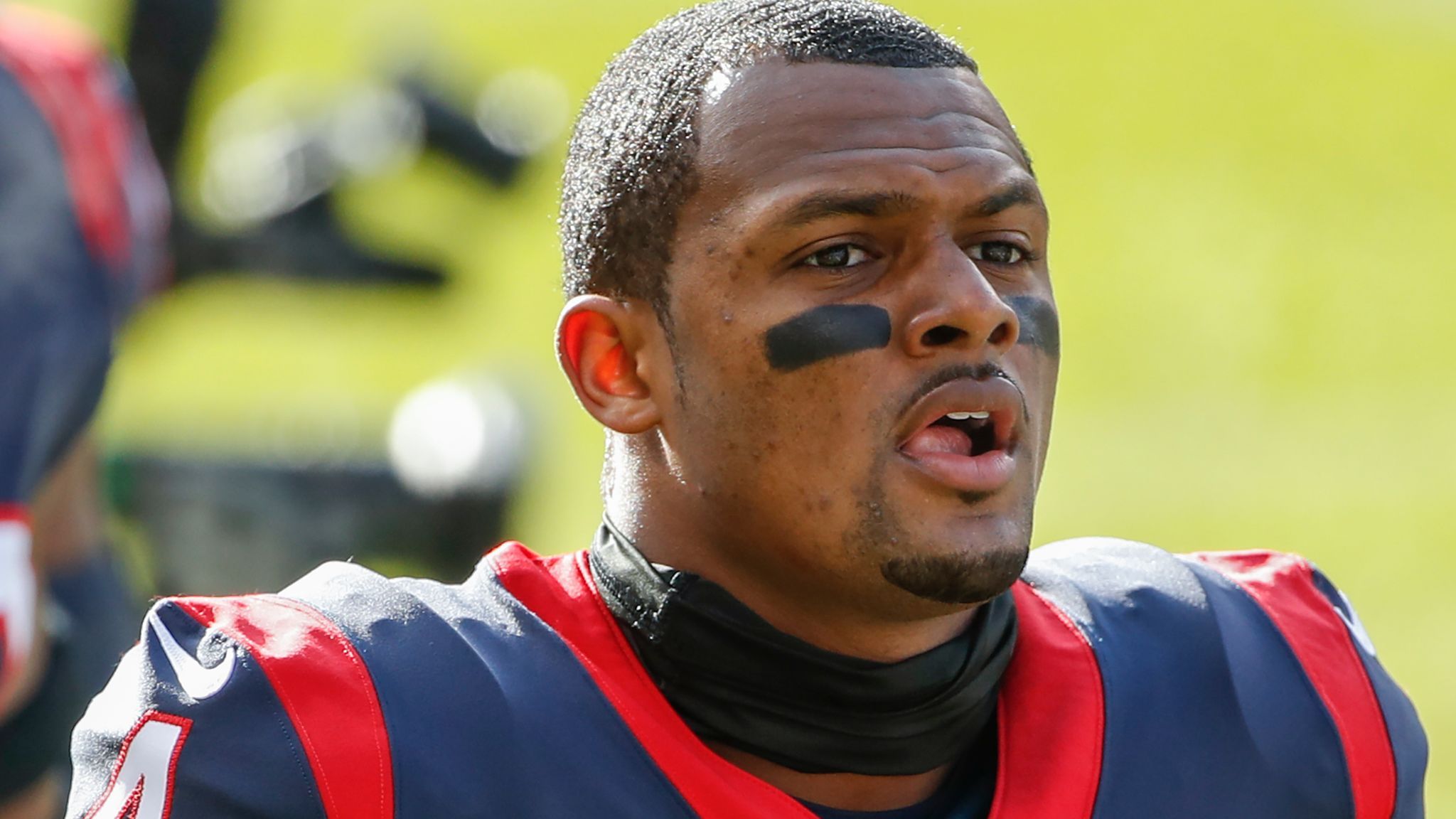 The light at the end of the tunnel can finally be seen for Houston Texans fans. Since the Harris County Grand Jury did not find enough evidence to charge quarterback Deshaun Watson with sexual assault, numerous NFL teams are displaying interest in trading for the franchise star.

The market is heating up with a trade likely to be completed before the 2022 NFL Draft in late April. The Texans are expected to grant interested teams permission to speak with Watson and said teams understand the asking price - three first-round picks and more, with general manager Nick Caserio also desiring two starter-caliber players on rookie-scale contracts.

To get a deal done, Watson would need to approve of his destination and waive his no-trade clause. This provides a slight roadblock but not substantial enough to truly derail a deal. Russell Wilson and the Seattle Seahawks proved they could work cohesively together to find a trade partner worthy of waiving his no-trade clause and Watson has publicly announced his desire to rebuild his image - playing nice with Caserio would be a first step.

This article will discuss four potential trade packages, keeping in mind the perspective of the team trading for Watson, why Watson would want to play for said team and then analysis on the deal itself. Let's do this thing.

Carolina's POV: The odds-on favorite to land Watson, the Panthers have pressure from ownership to find a franchise quarterback at all costs. Carolina easily has the best combination of draft picks and players to create a "godfather" offer. While Watson wouldn't talk to the Panthers last year when they came calling around the trade deadline, ESPN reports that he would now be willing to waive his no-trade clause.

Watson's POV: The idea of throwing to DJ Moore and having Christian McCaffrey (when he's healthy) is a nice one-two punch. Furthermore, Panthers' quarterback coach Sean Ryan was with Watson for two years in Houston. Thus, there is some sense of familiarity on the coaching staff to supplement the unattractiveness of head coach Matt Rhule.

Without any day-two (2nd and 3rd round) picks in the 2022 draft, Carolina will have to tap into their pool of talented defensive players to build the necessary package Nick Caserio is demanding.

Jaycee Horn, Brian Burns and Jeremy Chinn are rumored to not be included despite interest from Houston. With a robust trade market quickly forming - especially among the NFC South - the Panthers may have to get uncomfortable and give up one of their core defenders to secure the 26-year-old franchise quarterback from other teams.

Analysis: This feels like a realistic compromise as the Panthers keep Horn, Burns and Brown but part with former second-rounders Chinn and Gross-Matos. Houston gets a freakishly athletic safety who is a ball-magnet that can play deep and in the box while making contributions versus the run and pass game.

Gross-Matos represents an upside play at EDGE who has the physical (6'5, 265lbs, 34.5" arms) and athletic gifts to grow into a starter in Lovie Smith's defense and fits a 4-3 better than Burns.

New Orleans' POV: The Saints have quickly "emerged as an extremely serious contender for Deshaun Watson", according to Aaron Wilson of PFN. With the news of Tom Brady un-retiring and returning to the Tampa Bay Buccaneers, the Saints might feel pressure to add an elite quarterback of their own and Wilson states that OT Ryan Ramczyk "would likely be part of a potential Saints trade".

For New Orleans' tricky cap situation, Ramczyk's five-year, 96 million dollar contract will be yet another test of cap manipulation skills. Furthermore, Wilson reports that other players to watch for include EDGE Marcus Davenport, DT David Onyemata and OC Erik McCoy.

Watson's POV: With a playoff-ready roster, New Orleans can provide Watson with a star receiver in Michael Thomas, a talented offensive line - even if they lose Ramczyk - and a dual-threat RB in Alvin Kamara. They are certainly one of the most attractive landing spots from a pure roster construction standpoint.

Analysis: Houston gets the three firsts, two starters and additional picks package they desire and Ramczyk, while pricey, is a top-five right tackle in the NFL. They could easily move Tytus Howard to left tackle and find a trade partner for Laremy Tunsil, evening out the salary cap implications.

Furthermore, Davenport is hot off a nine sack season while starting just nine games on a deep Saints d-line. He fits nicely as a 4-3 DE who is sound versus the run and displayed an expanding pass rush repertoire in 2021. Could he follow in former Saints' DE Trey Hendrickson's footsteps and ball out once away from New Orleans?

Seattle's POV: With a massive hole at quarterback after the Russell Wilson trade, the Seahawks are reportedly interested in pursuing Watson and have the future draft capital to entice Houston. They could simply look to keep their picks and take a longer-term approach at a rebuild but Seattle's lack of draft success doesn't make that a high-probability outcome.

Watson's POV: Watson would certainly enjoy throwing to one of the best wide receiver duos in the NFL, with DK Metcalf and Tyler Lockett meshing well with his affinity for the deep ball. He'll also respect Pete Carroll as a successful head coach - one of the main components he's looking for on his next team - but Seattle would need to invest more into their offensive line to keep Watson upright.

Analysis: The Seahawks get away from adding any players to this deal by sending a historic seven picks over the next three years. Those second and third-rounders in 2022 should be quite valuable to Houston as that is where the value in this upcoming draft class stockpiles.

Cleveland's POV: Is Baker Mayfield the answer to the Browns' historic quarterback issues? It seems like the franchise is as uncertain as fanbases are. Cleveland has been doing plenty of digging into the Watson situation and according to Aaron Wilson of PFN, are "incredibly interested". Additionally, trading for former All-Pro receiver Amari Cooper could be a signal to Watson that they will do whatever is necessary to surround him with talent.

Watson's POV: The Browns already sport an elite offensive line and run game with a talented RB duo in Nick Chubb and Kareem Hunt. Head coach Kevin Stefanski is one of the better offensive minds in the game and could make life easy for Watson. They also have a young and hungry defense led by Myles Garrett, forming a fairly complete roster to complement the star quarterback.

Analysis: This package is the first to not include three first-round picks because the Browns will likely not be as desperate as the aforementioned teams, seeing as Mayfield is a more viable starter than Sam Darnold and Drew Lock. Furthermore, GM Andrew Berry is one of the best in the business and regularly makes calculated moves at a great value.

The players involved still make this a win for the Texans as second-rounder "J.O.K." was one of the best rookie LBs in 2021 and second-rounder Delpit was seen by most as a first-round talent. They would instantly provide Houston with two starters on affordable rookie-scale contracts and are exceptional fits in Lovie Smith's defense.

Any of these five trade packages would represent a great haul for the Houston Texans and provide much-needed help to expedite the rebuild. Ordering my personal preference of these packages goes as follows: Panthers > Saints > Seahawks > Browns. Feel free to ask me questions or provide your thoughts on Twitter: @Texans_Thoughts