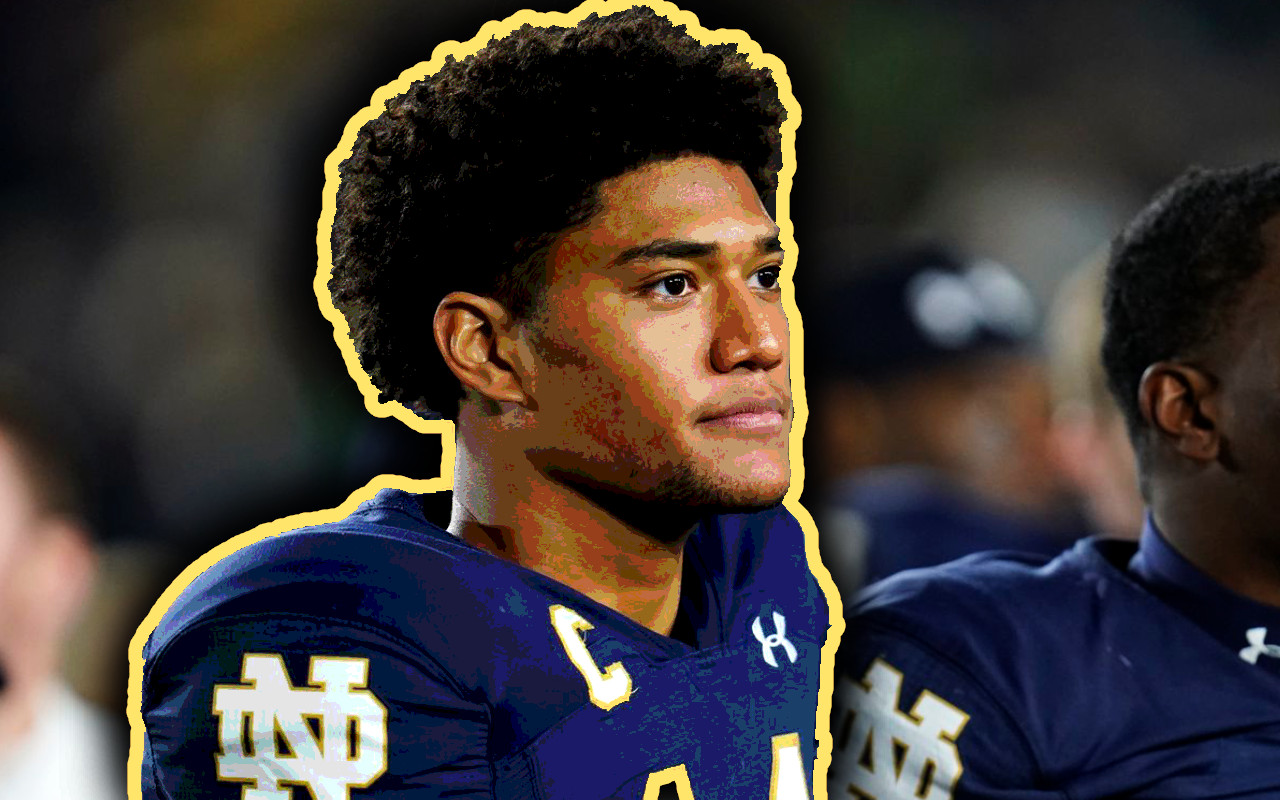 How can a safety be the best player in the NFL Draft? Well, Notre Dame's Kyle Hamilton cannot be defined by just one label. Don't get me wrong; he is outstanding at doing "safety" things - over his three seasons, he's played 856 snaps in coverage per PFF and only gave up one total touchdown. That being said, look at Hamilton like a chess piece. He's not just a knight that can move in a limited "L" shape. He's a queen that is multi-directional and multi-positional, making him the most valuable piece on the board.

Do it all defender

At six-foot-four, Hamilton towers over the slot receivers he regularly covers when playing nickel corner. At 220 pounds, he packs a serious punch as tight ends enter his middle hook zone when playing linebacker. Despite running a 4.59 40-yard dash - Justin Simmons ran 4.61 and Kam Chancellor ran 4.62 btw - Hamilton has elite instincts and long strides, leading to jaw-dropping interceptions when playing safety.

While EDGE has conventionally held more positional value over safety, Kayvon Thibodeaux and Aidan Hutchinson's quiet final performances - versus Utah and Georgia, respectively - help reveal which of these "Big 3" may truly be the most impactful at the NFL level.

Leading up to their Championship games, Utah and Georgia benefitted from having extra time to gameplan for Thibs and Hutch - most NFL teams should game plan even more efficiently. Those offenses got the ball out quickly, double and triple-teamed both pass rushers and ran the ball away from them - minimizing the impact they could have on the field and effectively making them disappear.

Scheming star defenders out of the game is much harder to execute versus Hamilton because he can succeed at either safety position, nickel corner and occasionally linebacker - unlike both EDGEs who can only play EDGE. Hamilton's versatility provides the defensive potential to creatively morph and mirror whatever the offensive game plan is.

Teams looking to attack vertically and create big plays will be slowed down when Hamilton roams deep as a ball hawk. He excels when playing deep in Cover 2 or Cover 4 and can erase half of the field. Hamilton's instincts, range and awareness allow him to regularly be in the right place at the right time to the tune of eight interceptions and 16 pass breakups in 31 career games.

By playing with two safeties deep, defending the pass is the priority and box numbers are lighter, thus, offenses may counter punch by pounding the rock on the ground. Hamilton blows up the run because he instantaneously diagnoses plays and flies downhill with aggression and takes calculated angles to make open-field tackles.

Furthermore, offenses looking to spread defenses out and make space for their slot receivers will be limited when Hamilton moves to nickel. He has a knack for anticipating and pouncing on out routes - many of the below plays are pick-sixes if thrown.

Finally, teams with strong tight end play that like to target the intermediate-middle of the field will feel Hamilton's presence at linebacker. He has the size, length and physicality to make players think twice when running across the middle of the field. Additionally, his safety-like range in hook zones defies what is typically expected out of linebackers and erases mismatches offenses previously thought they could exploit.

Hamilton is a swiss-army knife labeled as a safety, but that only describes the tip of the iceberg regarding his talents. As skeptics question Thibodeaux's love for the game, plus the existing physical limitations - short arms and not stellar bend+get-off - surrounding Hutchinson and his potential, the sky is truly the limit for Hamilton. Years from now, he could very well be the best player in this 2022 class.

There is not a team in the top-10, or the entire NFL, that could not use Hamilton's talents. He should be a lock for the top-three, but teams will likely read "safety" and respond with "not that high." Teams make mistakes every year but should learn from Micah Parsons in the 2021 NFL Draft.

Parsons was also an elite athlete who oozed versatility and potential but, like Hamilton, played a non-traditionally valuable position at off-ball linebacker. He was a top-five talent in the class but fell to the Dallas Cowboys at pick 12 - partly due to off-field concerns.

Parsons' athleticism, instincts and functional versatility - playing off-ball linebacker and defensive end - has culminated in a defensive player of the year type of season as a rookie. Generational talents like Parsons and Hamilton are worth betting on, even if their position isn't as historically valuable as a quarterback, left tackle or defensive end.

Overall, Hamilton is more than a safety. If put in a system that allows him to attack the ball from numerous positions - Houston Texans, New York Jets, Carolina Panthers are great fits - he could be the best player in the 2022 NFL Draft.