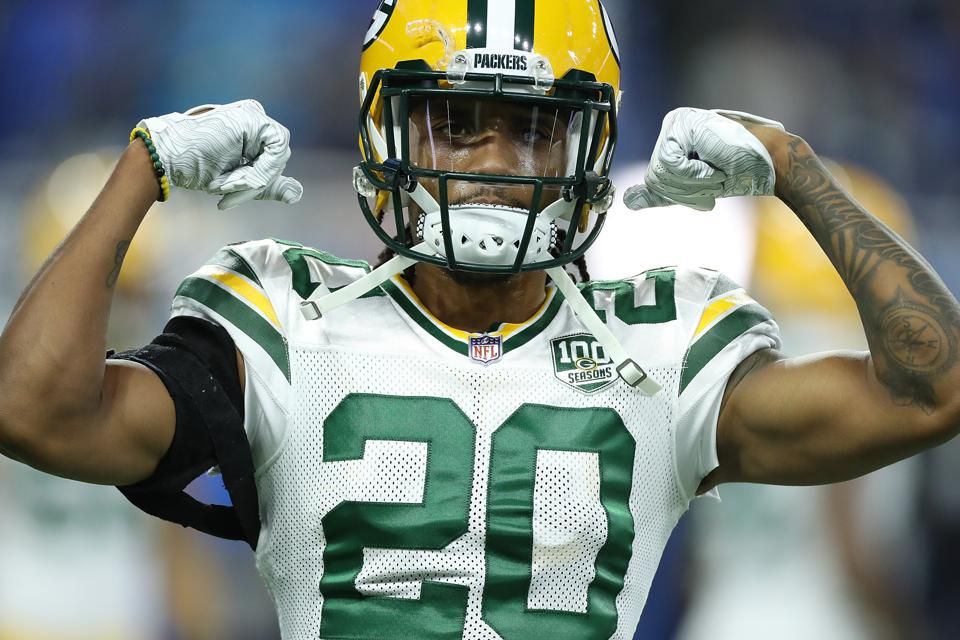 Kevin King is the ideal Cornerback for Lovie Smith's Tampa 2. Don't let the TD he gave up in the playoff game vs the Buccaneers (where he only gave up 2 catches total) cloud your judgement on King. While he's not the perfect CB, his strengths can be maximized and weaknesses minimized in the Texans scheme.

CB is the most scheme specific position within Lovie Smith's Tampa 2. He requires a tall, long-armed CB who is willing to get physical in press at the LOS. They also need to be able to tackle, bringing run support from the EDGE so that you can still have two safeties deep, instead of one in the box. Finally, while they don't need to be fluid in man coverage or have deep speed (two safeties deep to help) they should be aware and instinctual in the differing flat zones in a Cover 2 shell (Hard/Cloud/Curl).

King passes all of these tests with flying colors. He has the ideal physical measurements and is one of the few CBs you'll find nowadays who WANT to tackle. The below plays showcase the dog mentality you're getting out of King.

Play 1 (Eagles): King notices the motion coming to his side and immediately knows what's coming. He crashes downhill and blows up the Fullbacks block on the edge. This helps nullify the play entirely.

Play 2 (Vikings): Similar motion again but this time two WRs come his way, so King can't just fly downhill. He plays it slow until he reads that Thielen has the ball, then quickly makes a tackle to prevent a huge gain.

Play 3 (Colts): This play excites me because it's rare you ever see a CB shed a block. TE Mo-Allie Cox is one of the better blockers in the NFL, and King could've just let Brissett keep running, but it speaks to his mentality as a run defender.

Teams tried to target King in the run game, but had no success. King almost always lines up on the right side of the defense and thus the Colts ran a tight split to that side, with no WR out wide, and just a TE in-line. The idea here is to create an advantageous cutback lane for the RB to take on a CB 1-on-1. Versus most CBs in the NFL, this is an easy juke for the RB and a possible TD. But King squeezes the gap between him and the TE and gets his hands dirty yet again.

So we've talked about his run defense but at the end of the day, coverage is key, especially nowadays when teams are passing the ball at historic rates. King is an interesting study because he doesn't have the agility or fluid hips to change direction in man coverage and keep up with shifty WRs. That's where most of his coverage blunders will occur.

In addition, even though he ran a 4.43 40 yard dash, King doesn't have elite deep speed. So, think about a system where he can primarily play zone coverage, while having safety help overtop. Have you thought about the Tampa 2 yet?

The Packers rarely ever played Tampa 2, but did play their fair share of Cover 2. There's not really any difference for the CB here, although in Tampa 2 they are more likely to press.

On this play King is about 5 yards off the LOS, but he reads the Vikings Curl-Flat concept to perfection. For just one side shuffle, King shows like he's sinking with the curl, which causes QB Kirk Cousins to throw to the TE in the flat. King is reading the QB's eyes the entire way and breaks quickly on the throw, making a secure tackle in space vs an athletic TE.

King can break on the ball and close space in off coverage, but he's devastating in press. He uses his 32" arms to his advantage, but we also see his physical mentality that showed up in the run game, when jamming WRs. Versus Julio Jones, King rose to the occasion, a common occurrence when he plays top WRs.

Julio is trying to win on an out route, but King shoots his arms into Julio's chest and controls him. Within 5 yards of the LOS, King has some freedom to direct Julio wherever he wants. Since he's well attached, King can run the out with Julio and force Matt Ryan to go elsewhere.

I'll admit that King has inconsistencies in his overall game. However, he always seems to take his matchup with these bigger, physical WRs seriously. He played Julio Jones well, and locked down Allen Robinson as well, when matched up.

King showed how he can excel vs routes in the short area of the field, and use his length to rack up PBUs.

Clip 1: King is in Cover 3, A Rob runs a slant, King breaks quickly inside for the PBU.

Clip 2: King is trying to stack A Rob and stay on top of his top shoulder, while still giving him some space. When A Rob sits on his hitch, King quickly bursts forward and times the throw perfectly.

While there may be more overall talented CBs in this class (William Jackson III, Shaq Griffin) there IS NOT a better fit for what Lovie Smith wants us to run. I am tired of seeing square pegs forced into round holes. King is perfect for what we ask out of CBs and is getting unwarranted disrespect.

Due to the fact that King is not a perfect fit for every scheme, plus an injury history that has caused him to play 9, 6, 15 and 11 games, I don't think King will break the bank. Overthecap values him at 4.5m per year and that would be an ideal contract for the Texans to give him (plus a likely overpay).

While he didn't have the 2020 season he would've liked, his 2019 season was top 10 level CB play. There are some ifs to King, but his potential is more than worth banking on at that price.

King fits the Texans rebuilding timeline perfectly. Young at just 25, his best football is definitely ahead of him. Giving him a 2 year deal works for both sides as King can try to prove he can stay healthy, and get back to that 2019 level of play. If he does, he'd be in line to get PAID at just 27.

For the Texans, we take a chance on a high ceiling player who we could resign if he plays well. If not, it's just 2 years, and his poor play could help the tanking process (if that's what we want to do).

Recency and primetime TV bias has severely hurt King's reputation around NFL fans. However, his fit with the Texans could make him more attractive to us than most teams. The talent is unquestionable, and while I don't entirely expect the Texans to even pursue him, he'd be a smart target and show that the front office is aligned with the coaching staff.