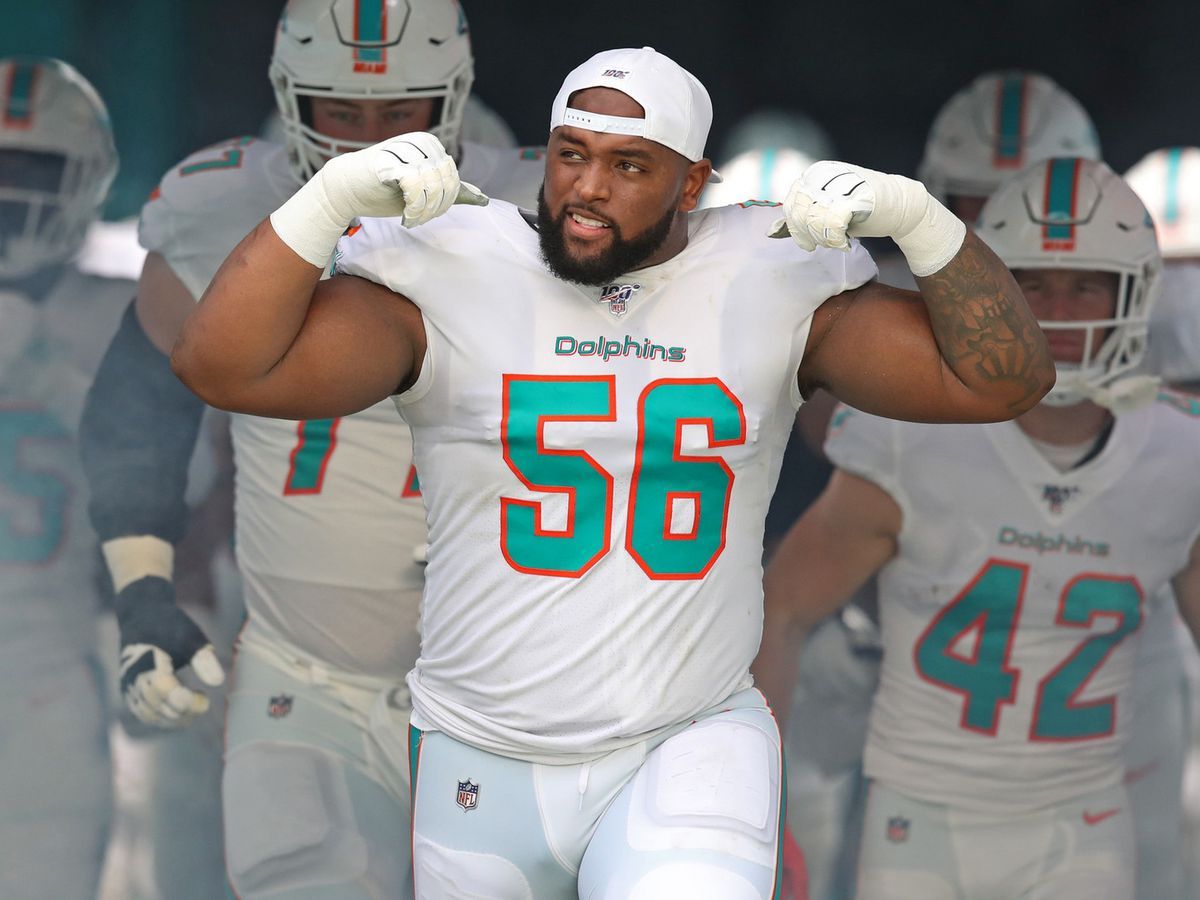 Maybe the most underrated need for the Houston Texans is a Defensive Tackle who can shut down the run. Enter Davon Godchaux.

Godchaux is your typical Nose Tackle/1-tech DT who may not be the most fleet of foot, but is an impossible mountain to move. For the Dolphins, he lines up from 0, 1, 2i to 3-tech and dominates the run game.

As the Texans transition from a 3-4 heavy defense to 4-3, the 1-tech defensive tackle becomes a big need. The 1-tech is "shaded" to one shoulder of the Center, instead of right in front of them, like a nose tackle. However, their role is often the same - take on double teams, don't give up ground, and allow your linebackers to roam free.

We saw Brandon Dunn, PJ Hall and Ross Blacklock struggle in this role, and that contributed to the Texans 29th ranked run defense. Godchaux would be an immediate starter, and help to replace our DJ Reader sized hole on the interior.

Most of the work Godchaux will do is of the dirty variety, and won't show up in the box score. Lined up as a 1-tech (between the Center and Left Guard) he (56) takes on the double team and allows LB #52 to run unblocked to the RB.

It's definitely a simple play, but also a foundational play for every defense. A big reason for LB Zach Cunningham's down season is because of weaker DT play, so signing Godchaux would be huge for him.

As an offense, you can't get away with only sending one blocker towards Godchaux, it won't be enough. He's lined up as a 1-tech, this time on the backside of the run (run goes to his left, but he's to the right of the center). The LG tries to reach block him, but Godchaux stacks and sheds with ease, to make the tackle.

In terms of team building philosophy, Nick Caserio and the New England Patriots love to utilize two run stuffing defensive tackles, and really sell out for the run. Dolphins Head Coach and former Patriot Brian Flores adopts this style as well, using Godchaux at 3-tech, where he is still adept at shutting down the run.

Lined up over the outside shoulder of the LG, Godchaux extends his long arms into his opponents chest, controlling the point of attack. He pulls on the LG's jersey and tugs him aside, getting off the block and making the tackle.

Godchaux is physically dominating, but also technically sound. Every team needs a defensive tackle to anchor their run defense, and Godchaux could be our best bet.

Overthecap projects Godchaux's value to be worth 3.5m per year, however I don't believe he'll receive a contract of that value. He doesn't have many years of great production, and missing 11 games in 2020 creates a recency bias which clouds how talented of a player he really is.

The Dolphins would have the best idea of his talents, but with Christian Wilkins and Raekwon Davis showing out, will they bring back Godchaux?

Finishing his rookie contract, Godchaux is entering his prime at 27. Defensive tackles like him tend to be able to play into their early/mid 30s, so there's no worry of drop off in play, imo.

Getting a player who still has his best football ahead of him is perfect for the rebuilding Texans. While there are a lot of DTs in this years free agency class, most of them are veterans who are already on the other side of 30. Go with Godchaux.

Godchaux fits the Texans through positional need, financials and timeline. You're not going to find better bang for your buck, at DT. As much as I would love a guy like Dalvin Tomlinson, Godchaux can have a similar impact, maybe 75-80%, for an infinitely cheaper contract. Brian Flores can vouch for him to Nick, get it done Caserio!