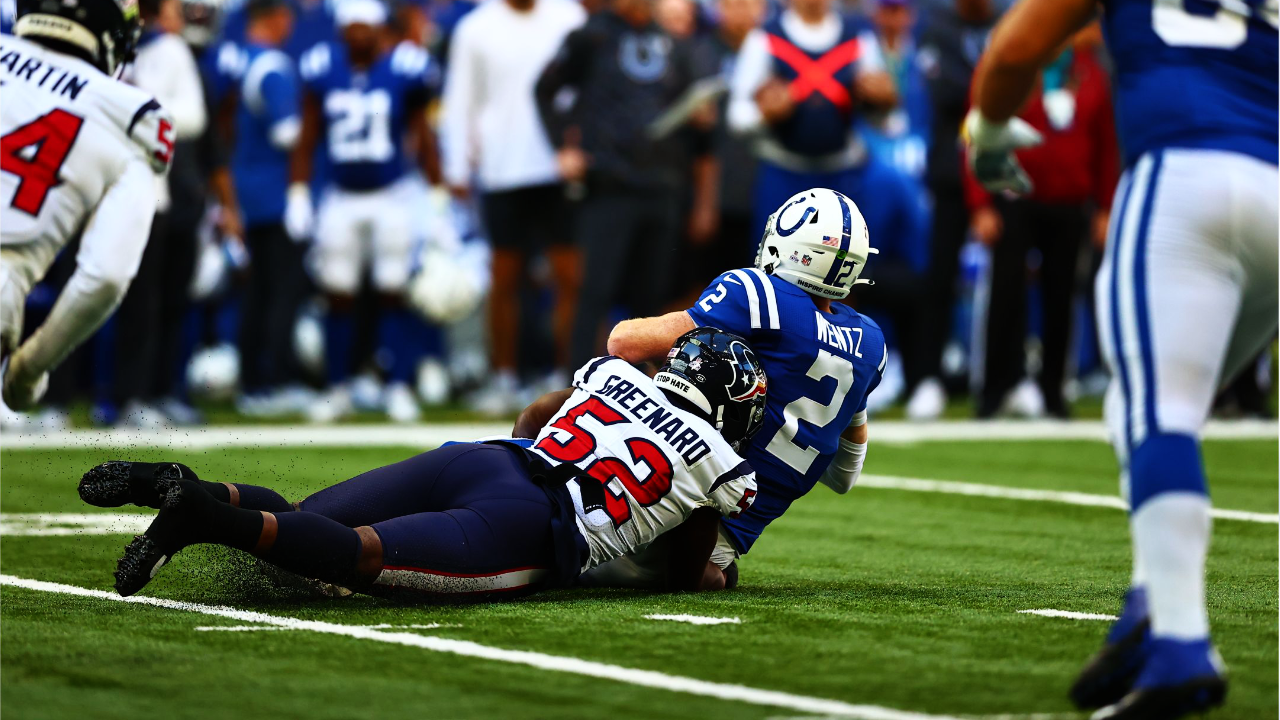 Jonathan Greenard is Shining as a Starter for the Houston Texans

After starting just one game and playing 24% of the snaps as a rookie in 2020, Jonathan Greenard is making the most of his starting opportunities in 2021. Six games into the 2021-2022 NFL season, Greenard has started the last four matches - he only played in 25% of the snaps vs the Bills so it's kind of three starts - in which he's tallied an impressive 13 tackles, four sacks, six tackles for loss, five quarterback hits and eight pressures.

He's done all this while still not playing as much as the typical "starter" does, averaging 55% snap count in his three starts and being incredibly efficient to the point of being 2nd in the NFL in snaps per sack (per Ryan Riddle).

Jonathan Greenard is not getting enough attention for what he's done so far in 4 games this season. He's getting a sack every 29.75 snaps!

Rousseau (Buf) and Landry (Ten) both have a chance to move up this list 2nite.

I'm not going to get into how stupid it was that the previous coaching staff rarely played Greenard last season, but the new staff shouldn't make the same mistake and underplay the youngster (let's get that snap count into the 70s, at least).

With that out of the way, let's take a look at how Greenard has found his success vs the run and pass. Starting with the the money-maker, Greenard's four sacks lead the Texans and have mostly come in very similar circumstances.

In Week three, Greenard earned his first sack in his first start. The Panthers want to take a play-action shot down the field and go into 12 personnel (1 running back, 2 tight ends) to gain some extra blockers. With just three routes on the field, the Panthers outnumber the Texans with seven blockers to just four rushers.

Greenard has his work cut out for him with TE Ian Thomas (80) providing a chip at the line of scrimmage and TE Tommy Tremble (82) coming across the formation to pick him up.

None of it matters though, as Greenard (52) swipes away at Thomas' meh effort and then overpowers Tremble by getting low and bench pressing his chest.

In Week 5, Greenard got back to work where he again stymies a potential shot play out of play-action. The Patriots run 12 personnel like the Panthers did on the first sack and here they ask left guard James Ferentz (65) to pull, simulating a power run.

Ferentz has a tough task, needing to get out to the edge and block Greenard so that the left tackle and left guard can double team defensive tackle Maliek Collins (97). Ferentz fails his assignment largely due to the fact that Greenard was shot out of a cannon. He takes four whole steps off the snap and gains four whole yards before Ferentz can even get hands on him.

Past the guard now, Greenard stands up the running back and realizes the ball is elsewhere, then quickly hooks his right arm into Mac Jones (attempting to punch the ball out) and wills him to the ground.

In last weeks contest vs the Colts, Greenard had his best game as a pro and supercharged the Texans' brass into finally cutting ties with veteran Whitney Mercilus. Greenard's two sack effort was a nice coming out party and his first sack was disgusting.

No, you're not having deja vu, the opposing offense again tries to take a play action deep shot out of 12 personnel and Greenard again shuts it all down. He setup his rush vs Mo Allie-Cox (a solid blocker btw) like an accomplished veteran, which is promising to see.

Off the snap, Greenard head fakes and jab steps inside (to the offenses left) and draws Cox (81) in that direction... but he's not done there. Greenard uses two more fakes, one outside and one inside again, before pulling on Cox's jersey, planting his ass in the ground, winning to the outside and tracking down QB Carson Wentz (2)

Greenard wasn't done for the day and cleaned up on Jacob Martin's pressure to bring down Wentz for a second time. The first non-play action, 12 personnel sack comes when the Texans try to run a three-man stunt to generate pressure.

Demarcus Walker (55) is the spear, who rushes into the center and right guard to free up Maliek Collins and Jonathan Greenard who loop behind. The Colts pick it up quite well but the one man who wasn't part of the stunt, Martin (54), knocks back the left tackle and forces Wentz off his spot.

As for Greenard, I like how he dips his left shoulder to evade the chip attempt by the tight end. He doesn't do much in terms of an actual rush move, but gets off the block from the center in timely fashion and negates any scramble yards for Wentz.

When evaluating sacks, it's important to remember that not all sacks are earned equally. Beating David Bakhtiari with a cross-chop-dip-rip is far more indicative of future success than a coverage sack, cleanup sack or sack vs inferior competition.

If you haven't been counting, two of Greenard's sacks were versus tight ends, one sack came unblocked versus a slow pulling guard and the last one came off a failed stunt and clean up via a teammate's pressure.

I'm not trying to takeaway credit from Greenard on any of these sacks, but I do want to see more from him before we all start talking about a perennial double digit sack guy here.

Neither of those players have had generated any consistent level of pressure since those sacks and I hope Greenard doesn't fall to the same issue.

With all this being said, Greenard shows more promise in this regard, tallying eight quarterback pressures so far and there was one rep vs the Colts that really re-ignited my pre-draft love for him.

With the Florida Gators, Greenard often used a spin move to beat tackles. It's been a while since he busted it out, but he made a fool of Eric Fisher on this one. He starts his rush on an outside track and Fisher oversets as a result, leaving a huge gap between him and the left guard. Greenard notices this and spins towards the space, forcing Fisher to result to a tripping penalty to slow down Greenard.

Greenard has never been a freak athlete and can't rely on that for sacks at the highest level, therefore, the more often Greenard executes technically advanced moves like these, the more I'll be confident in his future sack production (watch out for his Demarcus Ware half-spin he used in college!).

So we've talked about Greenard as a pass rusher but he's also been our most productive run defender on the defensive line. Similarly to his success in the pass game, Greenard has made negative plays when left unblocked or when defeating tight ends.

Versus the Patriots, Maliek Collins attacks the outside shoulder of the right guard, drawing him to the outside while Greenard slants inside behind him. With a free path to the ball, Greenard nails RB Damien Harris (37) for a loss.

The area I trust Greenard the most to execute his job at a high level is when he defends the run versus a tight end. Against the Panthers, he's lined up on the strong side of the offensive formation as a 6-technique and meets his old buddy Ian Thomas (80).

Greenard has stellar technique when defending the run, shooting off the snap with low pad level to gain a leverage advantage. Furthermore, he strikes his hands into Thomas' chest and extends his arms to "stack" the block. Greenard watches Christian McCaffrey (22) who is forced to the edge because of Collins' penetration and Greenard sheds his own block to make the tackle behind the line.

Beating up on tight ends in the run game has been a consistent part of Greenard's game week-by-week and it should give the coaches confidence in his ability as a starting strong side 4-3 defensive end.

To repeat my previous point, producing vs tight ends shouldn't go unnoticed, but edge defenders won't always have a tight end blocking them and the best ones can make tackles look similarly silly.

Greenard flashed this the most in his last game vs the Colts, where he crossed the face of Eric Fisher (a very good run blocker) to make a tackle and shut down a zone run. Plus, he stopped a potentially big run from Jonathan Taylor (28) when he used his length well vs the right tackle to close a wide gap.

Greenard has flashed plenty of potential in this four (really three) game starting sample size and should get a decent boost in snaps with the Mercilus cut. I'd love to see him in the 70% snap count range most weeks and see how his production varies.

It's clear that the game has slowed down for Greenard and hopefully he can continue his emerging sophomore season and provide the Texans with a defensive building block, lord knows they need as many as they can get.