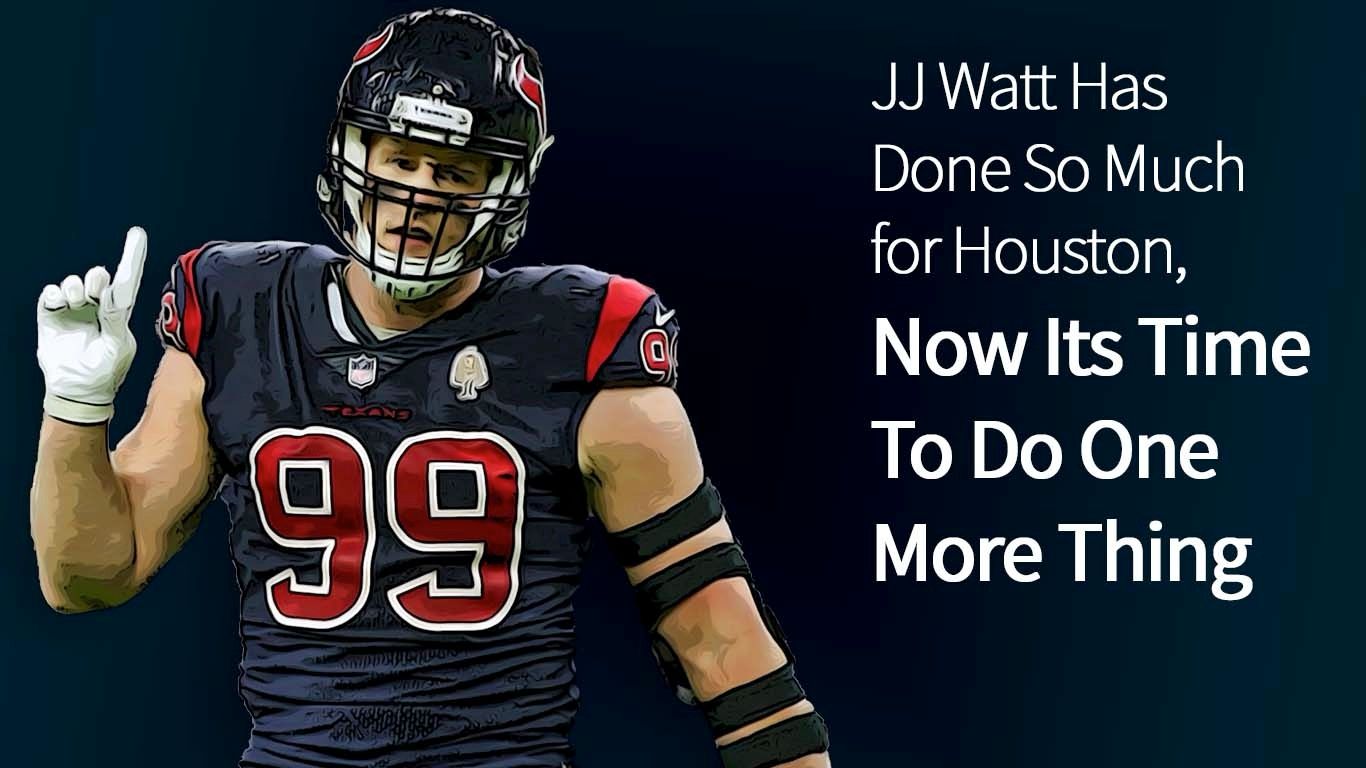 J.J. Watt Has Done So Much For Houston, Now It Is Time To Do One More Thing

After another devastating loss in Week 7, the Houston Texans are 1-6, and their ability to remain competitive for this season is near shut. It is time to look forward to the future, which means the organization will have to make some tough decisions.

Where the Houston Texans stand after entering the Bye week

Over the last week, the Houston Texans have received plenty of trade calls about players potentially being available; one such phone call from a Californian team that had the audacity to check if Deshaun Watson was available (this is not a joke).

Teams have called explicitly regarding Brandin Cooks, Will Fuller, Kenny Stills, and Keke Coutee. Even Whitney Mercilus, who signed a four-year extension in the offseason, has garnered some interest as well.

The Texans aren’t looking to make a fire sale at 1-6 without an established head coach and general manager. Jack Easterby is doing the right thing by holding firm with other NFL executives around the league and waiting for ownership to hire a General Manager. However, that doesn’t mean trades won’t happen under his watch; according to TU insider Patrick Storm, Easterby will need to be blown away by a deal to consider moving anybody.

One player currently holds some value above the rest and could add draft capital to a Texans' team with no selections in the first two rounds of the 2021 NFL Draft. He is to date the best to wear a Texans uniform and one of the athletes who have done more for Houston. He helped raise $37 million for Hurricane Harvey relief, among many other philanthropic efforts in Houston; that player is J.J. Watt.

Without a doubt, J.J. is the most decorated Texan’s player of this defense, A three-time DPOY, franchise sack leader, and has forged unforgettable moments for this franchise. The concept of trading JJ Watt is something I would never have thought into as he is still a fantastic player, and his presence is felt every time he steps on the field.

Unfortunately, this decision isn’t about the player; it is about maximizing a player’s value before there is no value.

Watt has played one full season over the last four years, and his injuries aren’t injuries that go away forever. If there ever was the right time to trade Watt, that time is now and for the following reasons:

In 2013, the Los Angeles Lakers signed NBA legend Kobe Bryant to a two-year $48 million extension; this was right after Kobe tore his Achilles. Kobe was never the same player, and the Lakers didn’t make the playoffs the rest of the time Kobe was a Laker. This decision killed any chance that the Lakers could sign another star and be a contender. I use this as a reference given the current cap bind the Texans are in; they can’t afford to be forced to sign J.J. to another extension. Houston already has several players on questionable deals that haven’t matched their production; why have another one?

The great franchises in sports can separate the emotional attachment to players and what they have done for the organization in the past. It's questionable whether this organization can do that, which means that there is only one way that J.J. Watt is traded.

Watt asking to be traded at the deadline is the only way a trade possibly happens. From a business standpoint, JJ is a magnet for any football market; he sells tickets, he still has the #1 selling jersey for the team after all these years, and he brings national attention to the team.

Trading Watt without his consent is a huge mistake the ownership cannot afford to make, so J.J. will need to be frustrated enough with where the team currently stands to push for a trade. J.J. is very aware of the legacy he has built over the last ten years, but I think he is at a point in his career where winning is the ultimate motivator.

Watt isn't getting any younger and this could honestly work best for both sides if the right circumstance presents itself.

Teams that make the most sense

If Watt approves to be traded from the Houston Texans, it will likely be behind closed doors and won’t be leaked. If that happens, what teams would be interested in the three-time NFL DPOY & what would the return be?

Pittsburgh Steelers- Yes, his brothers (Derek and T.J.) play in Pittsburgh, but that isn't the biggest reasoning behind this type of move. The Steelers look to be serious contenders in the AFC and already have one of the better defenses in the league, but adding a player of his caliber could push them over the top. The Steelers are in an arms race in the AFC and could use another great defender after the Baltimore Ravens acquired Yannick Ngakoue from the Minnesota Vikings.

With Ben Roethlisberger being on the back end of his career, there is no telling how much longer their window remains open. If they continue to perform at a high level, their 2021 first-round pick would likely be on the back end of the 1st round.

Would they consider sending that for J.J.? Might be wishing thinking that a team offers such a high pick, but sometimes it is about the situation the franchise is in, and Watt could be a piece that helps them go further in the playoffs against tougher offenses.

Seattle Seahawks- Seattle is always looking for talent via trade and could use a player like JJ Watt with their defense struggling this season. They lack pass rush and have for the last two years; J.J. could come in and help in that aspect. They do not have much draft capital considering what they gave up for Safety Jamal Adams, so the return would likely be their 2nd round pick in 2021. They also have the cap space to pay J.J for his next contract.

Green Bay Packers- This might be too obvious to come to fruition, but the Packers defense has been a disappointment given what we saw from them last year. The Smith pass-rushing tandem hasn’t performed at the level Green Bay expected so far this season, and they could use another pass rusher. Having a homegrown player like Watt closing his career in Wisconsin would also be a popular move among the fanbase.

Green Bay is a contender with or without Watt, but you have to wonder if adding one more piece to a struggling defense would be considered. It seems far fetched that the Packers offer a 1st; I would expect them to offer their 2nd round pick.

Getting good picks is vital in any Watt trade, and the Texans may need to take on a contract to make the numbers work under the cap.

With Easterby at the front office’s helm, there should be a ton of doubt that he will get the right return for Watt, but ultimately this is the situation we are in, and somebody will have to make a move.

Trading Watt isn’t something people want to see or hear, and that is understandable. However, when looking at the situation this team is currently in, they have to make some tough decisions to correct the created issues while O'Brien was the GM.

Watt will one day join Andre Johnson in the Texans Ring of Honor, and he will forever be cherished for what he did for this franchise and city. However, right now is the time to wish him good luck and bid him farewell as the team rebuilds around Deshaun Watson.