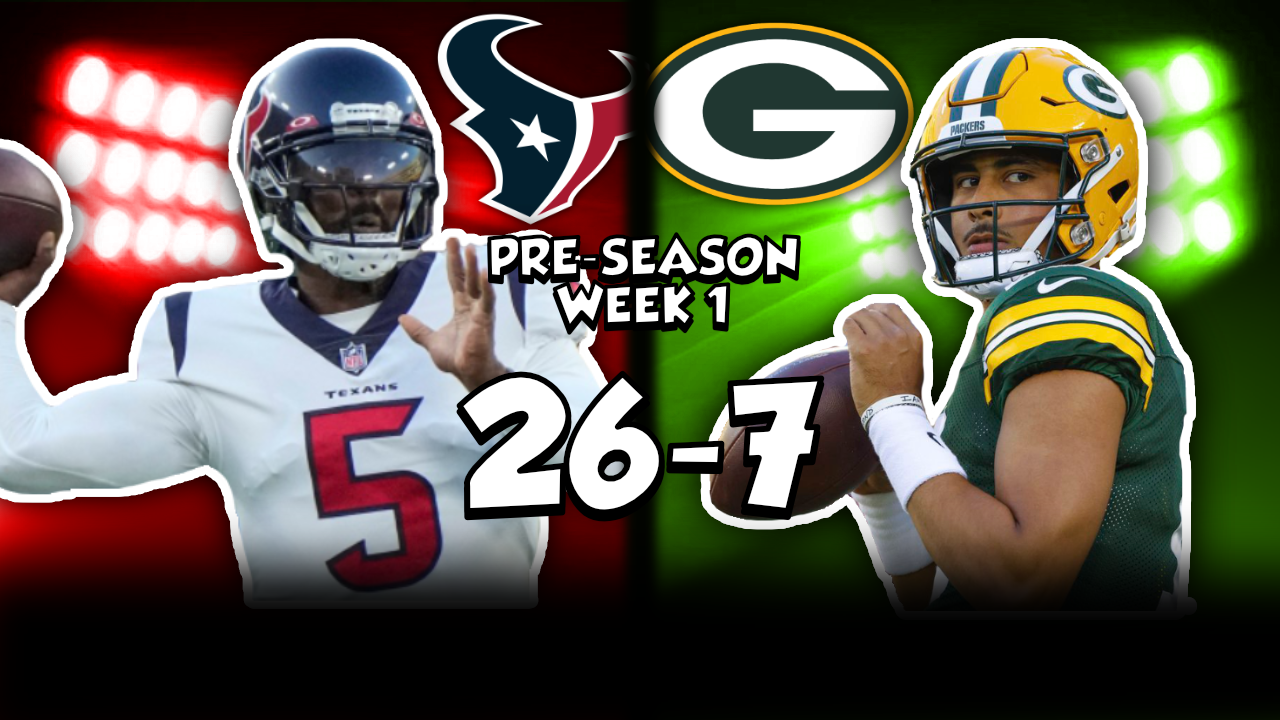 I saw a different Houston Texans team than in years past...

The energy and passion was evident on the field as teammates rallied to the ball, fought physically in the trenches and celebrated doing what they love to do - play fun football.

Simply put, this Saturday was FUN. In a preseason match vs the Green Bay Packers who went 13-3 last year, not many expected the Houston Texans to come out victorious, let alone in the convincing fashion they displayed.

I know, I know, it's only one game in preseason, but a W is a W. If we had lost, the narrative by the NFL media - and some fans - would be that we're the same ol' Texans and a poverty franchise that is going nowhere.

So you BET I'm going to be happy when we start off the season on the right page and display a drastic change from the dumpster fire that was 2020.

My biggest "way too early" takeaway is that we got to experience an early glimpse at the new identity that the Texans are looking to enforce on both sides of the field.

For my video breakdown going further in depth on the topics discussed below, ENJOY HERE!

Firstly, we saw many of the Texans coaches' cliché mantras come into effect as players COMPETED their hearts out for all 4 quarters, out-efforting the Packers as they looked to prove themselves and earn a spot on this congested roster.

I was particularly impressed with the work done in the trenches. Almost every defensive end and tackle flashed their talents and generally as a group looked faster, stronger and better with their hands than the Packers' backups.

I thought Roy Lopez' sack was emblematic of the #Texans overall effort level vs the Packers. I loved his, and many other's physicality+energy+motor.

Much better than some of the games we saw under BOB from his tenure 🤭 pic.twitter.com/X4BdxlXFHG

After finishing 30th in defensive DVOA (one of the very few statistics I like) in 2020, it was surprising to see such a dominating start in preseason.

7 points allowed, 0 in the 2nd half, just 242 total yards, 193 passing and 49 rushing. Yes, it's mostly backups with no Aaron Rodgers, Davante Adams or Aaron Jones, but it's not like the Texans were playing all their starters either. We were the deeper team, and it showed.

So how did they find success? The defense bought into Lovie Smith principles - they played fast, they played aggressive, they got off their blocks and they forced turnovers.

Rewatching #Texans v #Packers Thread below to follow along with some observations.

First 3rd down. Texans go Cover 1 Hole with Lonnie deep and Neville Hewitt in the "Hole" zone over the middle. Great undercut by King (25) and love the quick aggressive decision by Lonnie (1). pic.twitter.com/qqXN1bNp6a

Furthermore, the turnover differential was massive - the Packers had 5 (including 2 turnover on downs) while the Texans had just 1.

Creating turnovers and gifting the offense advantageous field position will go a long way to generating wins. Shoutout Jonathan Greenard for getting it started with a beauty.

This was such a CLEAN sack by Jon Greenard. Swipe and rip, makes it look easy, but it aint! pic.twitter.com/OTDcNjrkN6

As for the offense, they were fueled by a power run game - with lots of fullback love - and a quick passing game with some play action to keep the defense honest.

The #Texans featured many Power run concepts vs the Packers, often involving a FB. Scottie Phillips found great success with 13 rushes for 66 yards (5.1 YPC) and 1 TD.

I loved his patience, clean footwork and ability to run strong and skinny between the tackles. More pls! pic.twitter.com/vra6XM3kQD

After *usually* positive runs, the next most success was seen during quick game concepts. Tyrod Taylor and Chris Conley displayed great chemistry, and I hope Davis Mills builds off his one completion to Nico Collins.

Davis Mills operated best when the #Texans went 5-wide to spread the field and allow for quick, easy reads. Good rhythm throw with pressure to his right, doesn't get sped up. Easy "over" route to Nico

Nico got long strides to press vertical quick and create space to break inside pic.twitter.com/eChLCNfvE1

Hopefully Nico is targeted more than that singular time as he has arguably been THE MAN all throughout training camp.

After the quick passing game there wasn't a whole lot to get excited about, but I wanted to point out the similarities and changes in how the Texans went about their patented midfield shot plays.

Without a deep burner WR and with the Packers in a 2-deep coverage, they have intermediate routes instead of their patented deep Yankee concept. Good timing by Tyrod to Conley pic.twitter.com/izsUAIUuRc

I'll be very intrigued to see how or if those play-action shots evolve with or without Brandin Cooks in the lineup. I don't expect OC Tim Kelly to show his entire hand in preseason or anything, but with Tyrod having meh reviews on his training camp deep ball, I wouldn't be surprised if the deep shots are few and far between this year.

Overall, there was a lot to like out of our Houston Texans, far more than I expected, to be quite honest. Depth vs depth and the Texans came out on top. With more cuts coming, these next games will only provide us a more and more accurate picture of who the new-look Texans will be.

I'm far from declaring that this team will be a contender or make the playoffs, but this is about as good of a start as you could ask for. It's super early, but this team is reaping the benefits of Nick Caserio bringing in the most additions in the NFL.

Next up in preseason, the DallASS Cowboys, who's got us going 2-0? Hit me up on Twitter: @Texans_Thoughts for thoughts on the game, this article and anything Texans related.