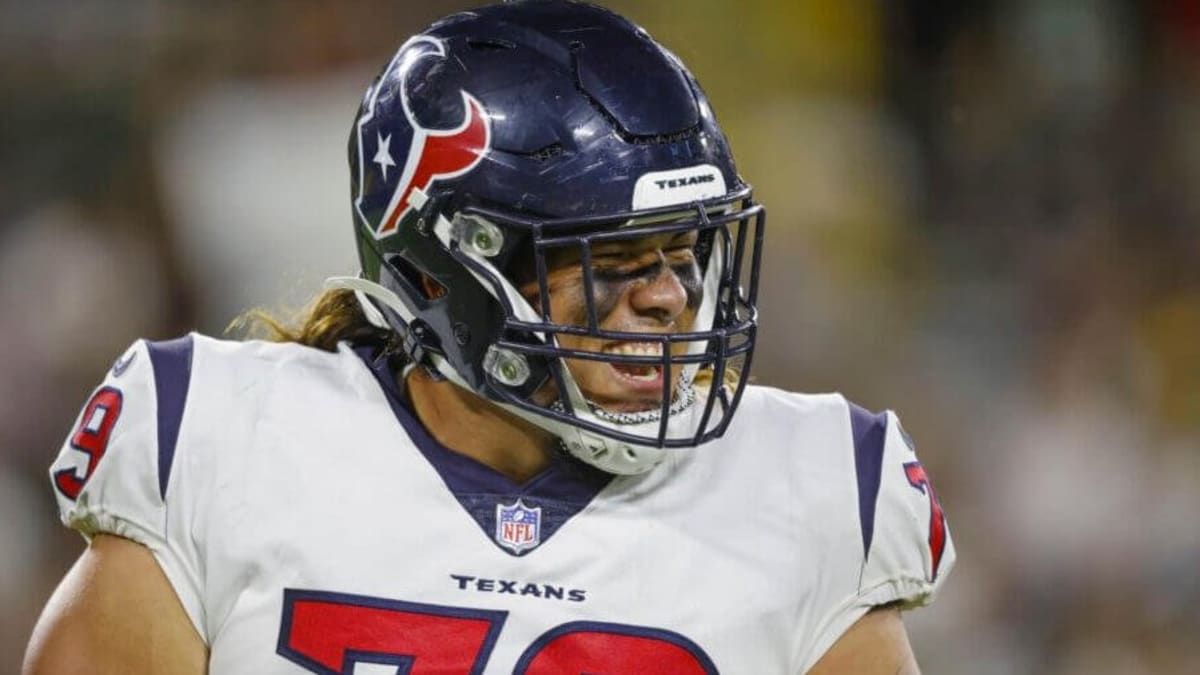 How Roy Lopez is Shining for the Houston Texans and What's the Next Step?

One hundred and ninety four. That's how many rookies were drafted ahead of Roy Lopez, in the 2021 NFL Draft. The Arizona talent fell into the sixth round until the Houston Texans scooped him up with their final pick. In a small draft class - just five rookies in total - there were certainly not very high expectations for any of the newbies.

Lopez, however, has far exceeded what seemed realistic and is shining not only as a starter, but as the best rookie in the Texans' class. Let's break down what this star pupil has been doing well, why his game has translated so quickly and some improvement areas to look forward to in the future.

Roy Lopez is hard to miss when watching Texans' football on Sunday. You can pick out big #91 on the defensive line with ease, but understanding his role on the team is a slightly tougher task.

Lopez plays Nose Tackle for the Texans and his job is to dominate the A gap, making the opposing Center's life difficult. Looking at an old Tampa Bay Buccaneers Defensive Playbook from 1999 - when Lovie Smith was the Linebacker coach and learned the Tampa 2 principles from the legendary Tony Dungy - we can gain further knowledge into what Lopez's job is.

In this playbook, the term Nose "Tackle" and "Guard" are interchangeable and Lopez must abide by these listed rules. The main job of the Nose Guard is to defend the run with physicality, discipline and technique. They often have to engage versus the Center, and also deal with a Guard "double teaming" or "combo blocking" them to create push.

At the end of the day it's about doing the dirty work in the trenches - taking on multiple blockers to allow teammates to run free and make tackles is job #1 but it isn't going to show up in the stat sheet too often. Thus, only looking at Lopez' box score stats will simply never indicate his true impact on the field.

Through 10 games, nine starts, 45% of the total snaps, 144 reps versus the run and 127 reps versus the pass, Lopez has: 17 tackles (10 solo, seven assisted), two tackles-for-loss, two QB hits, one sack and one fumble recovery. These certainly aren't mind blowing stats.

Furthermore, the Texans run defense as a unit is nothing to get excited about. They give up 4.5 yards per carry (25th in NFL) and 1,335 rushing yards total (30th) but using Sharp Stats' Directional Rushing Stats we can see that opposing teams have not had as much success when running towards Lopez.

Opposing runs behind the Center - Lopez's domain - have resulted in just 3.6 yards per carry, far lower than any other direction that teams run towards versus the Texans. This coincides with the most important Roy Lopez stat for you to takeaway today - his average depth of tackle is just 1.6 yards. Yes, Lopez doesn't make tackles very often, but when he does, his tackles are highly impactful run stuffs near the line of scrimmage.

What makes that 3.6 yards per carry on runs behind the Center even more impressive is the pure volume. That is the direction which the Texans have faced the most runs (63) and is nearly two times greater than any other direction. Simply put, opposing teams see that Roy Lopez is a rookie, have gone out of their way to target him by running the ball up the middle, but have found minimal success.

Now that we can better quantify just how well Lopez has been playing, let's take a look at the "why" behind his success as the Texans' starting Nose Guard.

I love analyzing the formula for a player's success. There are usually multiple ingredients which come together to create a cohesive meal, per se. For Lopez, it all starts with his frame. Listed at 6 foot 2, 318 pounds, Lopez is a bit smaller than your typical Nose Guard. Texans' fans will remember 6 foot 3, 347 pound DJ Reader, but Lopez is closer to another former Texan, Vince Wilfork who was listed at 6 foot 2, 325 pounds.

Lopez is not Wilfork, that would be a pretty outrageous take nine games into his rookie year, but the way they both succeed on the field is pretty similar. With a short, squatty and thick frame, Lopez is one tough SOB to move. He amplifies his frame by playing with good technique, to play bigger than his size. Lopez consistently plays with low pad level, bending by the knees and ensuring he wins the leverage battle versus his opponent.

Take this tackle during last week's win versus the Tennessee Titans for example. Lopez (91) is aligned as a 1-technique Nose Guard, in between the right shoulder of the Center Ben Jones (60) and the left shoulder of the Right Guard, Aaron Brewer (61).

Brewer, listed at 6 foot 1, is shorter than Lopez, so Lopez needs to overcome his natural leverage disadvantage. Right off the snap, Brewer is initially lower than Lopez, but Lopez bends his knees, gets his hands into Brewer's chest, gets slightly lower than Brewer before tossing him aside for the tackle for loss.

The other interesting part of this play is schematically, Lopez does his job exactly how Tony Dungy and Lovie Smith intended. NFL playbooks are insanely detailed and prepare the players for almost every possible scenario they could see. The Titans call a Gap concept run, where the Right Guard needs to make a "Drive Block" on Lopez.

A "Drive Block" is essentially a 1on1 block where Brewer is supposed to drive his legs and push Lopez downfield on a vertical plane. From the aforementioned 1999 Bucs playbook, we can see what Lopez is supposed to do on this play.

The Right Guard is the one making the "Drive Block" on Lopez, not the Center, but the same rules apply. Lopez's first step actually widens out his stance, to become more powerful, but then he astutely focuses on attacking the "near shoulder". Lopez gets his "hat in the crack", nearly head butting Brewer and then uses a swim move with his hands, to disengage from the block.

NFL offenses don't call just one type of run though and the Titans love them some zone runs. On this next Lopez tackle, the Titans call outside zone and Center Ben Jones (60) needs to make a "Hook Block". This type of block asks the Center to "reach" one gap over and block Lopez horizontally, attempting to gain leverage towards Lopez's outside shoulder.

Lopez's job is essentially the opposite, don't allow the Center to cross his face to the right and then make a tackle. You can see he attacks the near shoulder of the Center (the left shoulder), then drives through the Center's head to create penetration into the backfield. Next he flattens out, keeping his hips square to the line of scrimmage until Adrian Peterson (8) declares his leverage outside, then makes the tackle for just a one yard gain.

Defending zone runs is predicated on quickness to gain the desired horizontal leverage but Lopez has also found ways to win when he isn't the greatest athlete on a particular rep. His next tackle came when the Right Guard needed to reach block Lopez, and was very close to washing Lopez out of the play.

At first, Brewer (62) gets his head around to the right half of Lopez's body, gaining the desired horizontal leverage. Instead of trying to regain that leverage, Lopez recognizes a different path. He knows that Brewer is going to continue play side towards his right, so he uses Brewer's momentum against him, while swimming and cutting backside to his own left.

Making that split second decision in the heat of the moment is very impressive for a 6th round rookie. Lopez does not play like a typical youngster and his formula for success includes his stout frame, low pad level, wide base and swim move to disengage from blocks. While he already exhibits strong play, there are always areas players' can improve upon.

For Lopez to take his game to the next level there are two areas I would prioritize him focusing on. The first, is "get-off", which according to Tony Dungy and almost any defensive coach you ask, is the most important trait for defensive linemen.

Reps are often won or lost within the first second after the snap, so if Lopez can gain an instant advantage on his opponent by exhibiting an explosive get-off, his pure strength and impressive technique will make it very difficult for him to be blocked.

Improving this trait can come from a few areas. First is timing the snap, which can improve with film study, understanding offenses' cadences and just general added experience in the NFL. The second way too improve get-off is through explosiveness training. Lopez tested as having "Good" explosiveness, jumping 31 inches in the vertical and 8 feet, 9 inches in the broad jump. 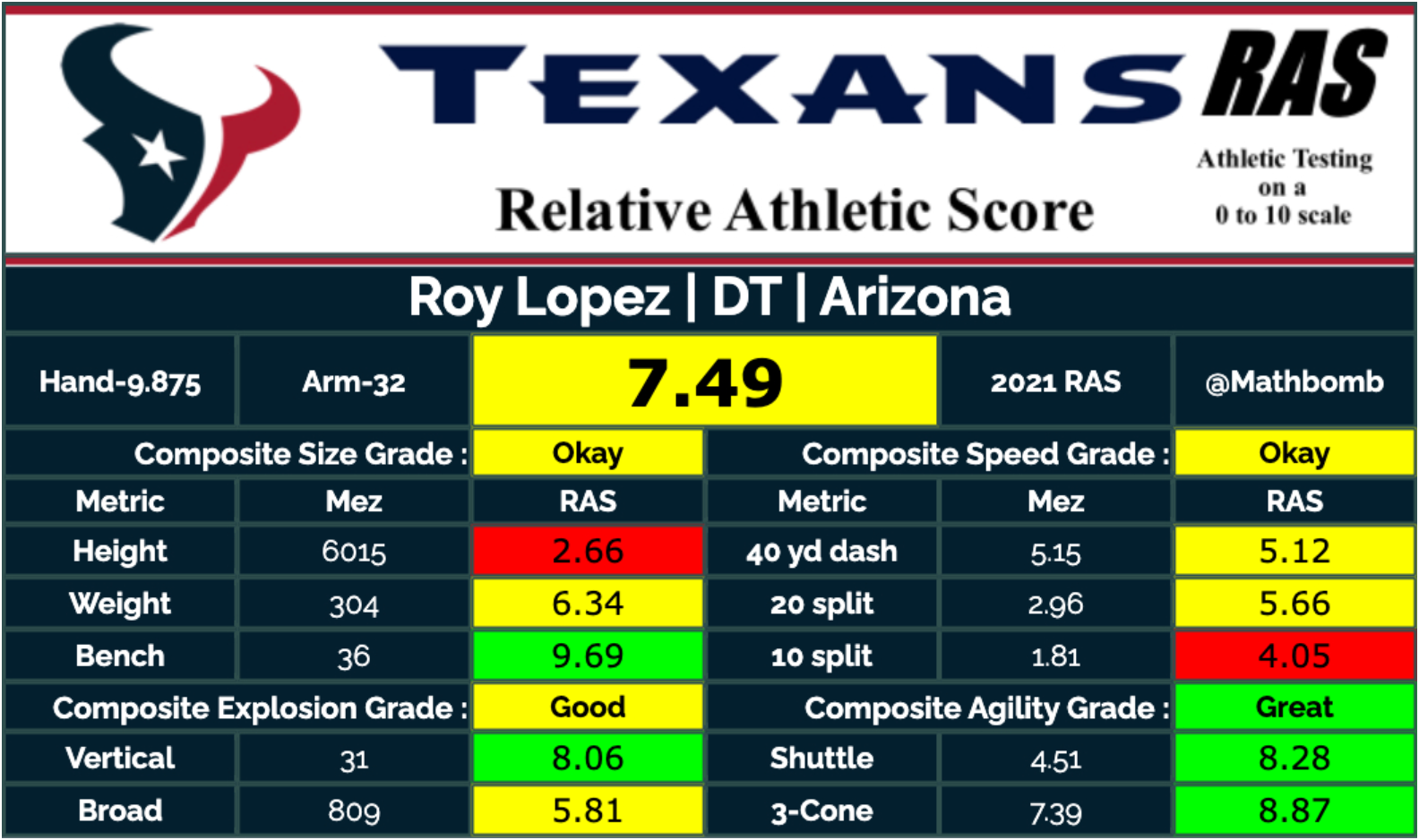 Turning that "Good" explosiveness into "Great" and improving his timing off the snap will turn Lopez into an absolute monster and likely increase his production. At 24 years of age, Lopez's athletic prime is still ahead of him and a full offseason of NFL training should have him looking more spry than ever.

I would classify improving Lopez's get-off as a short term goal and his next improvement - pass rush - should be a long term goal. Over the next few seasons I'd like to see Lopez improve at collapsing the pocket, an incredibly valuable trait that could afford Lopez more snaps and increase his overall impact.

Three down Nose Guards are a rare and elite group of players, look to the Buccaneers Vita Vea as an example of just how vital they can be for an elite defense. Improving the Texans defense would be supercharged by Lopez being able to impact the pass as well as he impacts the run.

So, what can Lopez work on to do such a thing? Improving his get-off is step one, step two is refining his footwork and pairing it with his hands. As we saw with his run defense, Lopez's first step will often be horizontal, rather than vertical. This gives him an advantage versus horizontal runs as he can beat his man to the spot. But versus vertical pass protection sets, Lopez stepping horizontally puts him farther away from his blocker and the quarterback.

As seen below, with Lopez taking that horizontal step and the Left Guard, Rodger Saffold (76) taking a vertical step, Lopez is caught off guard and gets jolted in place, before even attempting a pass rush move.

Every second and every movement counts, especially in the trenches; therefore, refining his rush path will go a long way for Lopez's success rushing the passer. Additionally, Lopez must learn to time his pass rush moves better and connect his hands to his feet.

On this next rep, Lopez again takes an inefficient horizontal step (look at Maliek Collins #97 get upfield as an example of what Lopez should do) and then mis-times his right handed chop move. Furthermore, as he's chopping down with his right, Lopez's left foot needs to move further forward so that Lopez's right hip gets hip to hip with Saffold's right hip. Closing those few blades of grass means Saffold has less time to recover, if Lopez's move lands effectively, but since neither of those things happen, Lopez is stuck far from the Quarterback (although he chases down the pass to get in on the tackle).

Roy Lopez has exceeded my expectations and played quite well for a sixth round rookie turned starter. His natural strength, pad level, wide base and understanding of the defensive scheme has made him the Texans' best run defender (by the film and the advanced stats). He's en route to being an above average starting Nose Guard and if he can improve his get-off and pass rush skills, watch out NFL.