How Anthony Weaver Can Change the Texans Defense Pt.1

Texans DC Anthony Weaver is bringing a newfound energy, and he's said all the right things in his press conferences. He wants to put the players in the best situations for them to succeed and play an aggressive and exotic defense. But what does that really mean? In this article I look at Rex Ryan's defense, Weaver's mentor and the main figure for whom he's said to have schematic influence from. Part one of this series will analyze two defensive formations, and see how that can help us greatly in the run game. Part two released on Thursday will look at different blitzes Weaver could take from Ryan, and how that can help us in the passing game. But for now, let's see how he can add some of Ryan's scheme to the Texans, and what it would look like with our personnel. 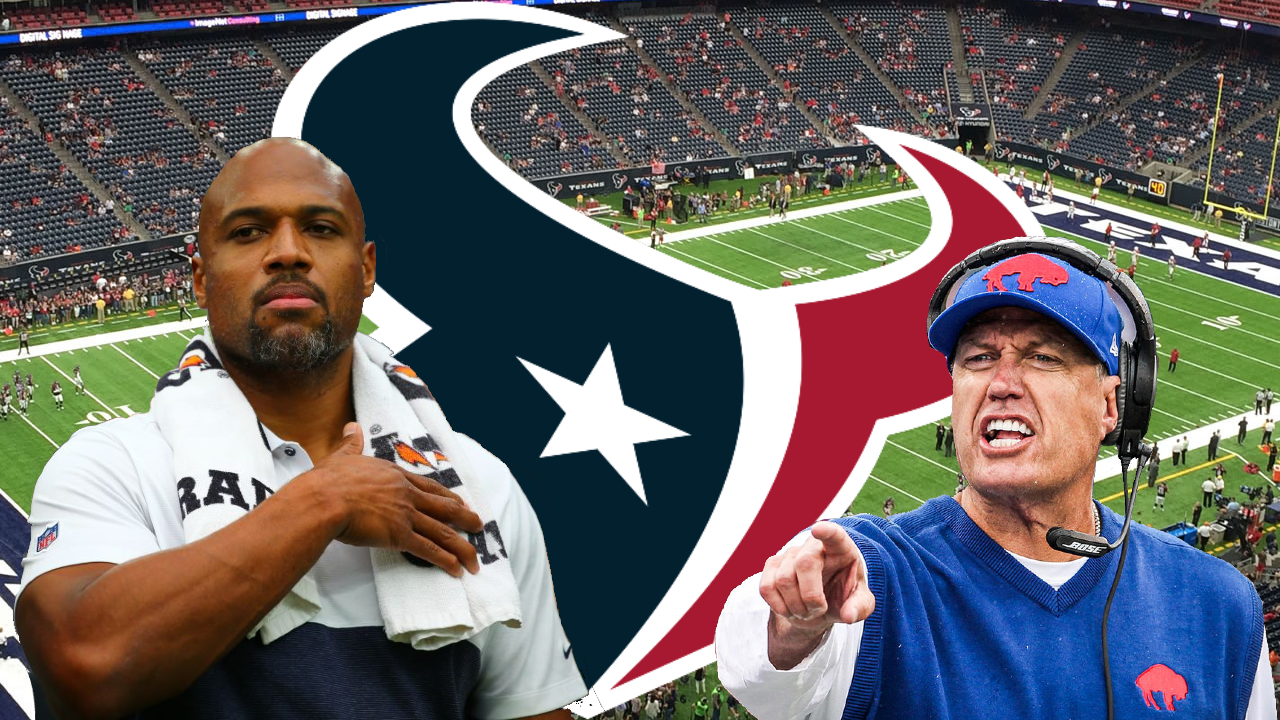 The main defensive formation that Ryan likes to employ is the 4-3 Under. This defense stresses putting more defenders in the box, and outnumbering the offense. This theoretically leads to a strong run defense. This scheme also focuses on putting pressure on the QB, by bringing different disguised blitzes. This formation will look a lot like a 3-4, but there are a couple differences. As seen in the pictures below, in a 4-3 Under, the 1-tech DT will be shaded to the strong side of the Center. The weak side 3-tech DT will be lined up between the weak side guard and tackle. The strong side DE will be lined up in a 5 tech position, shaded to the outside of the strong side tackle. 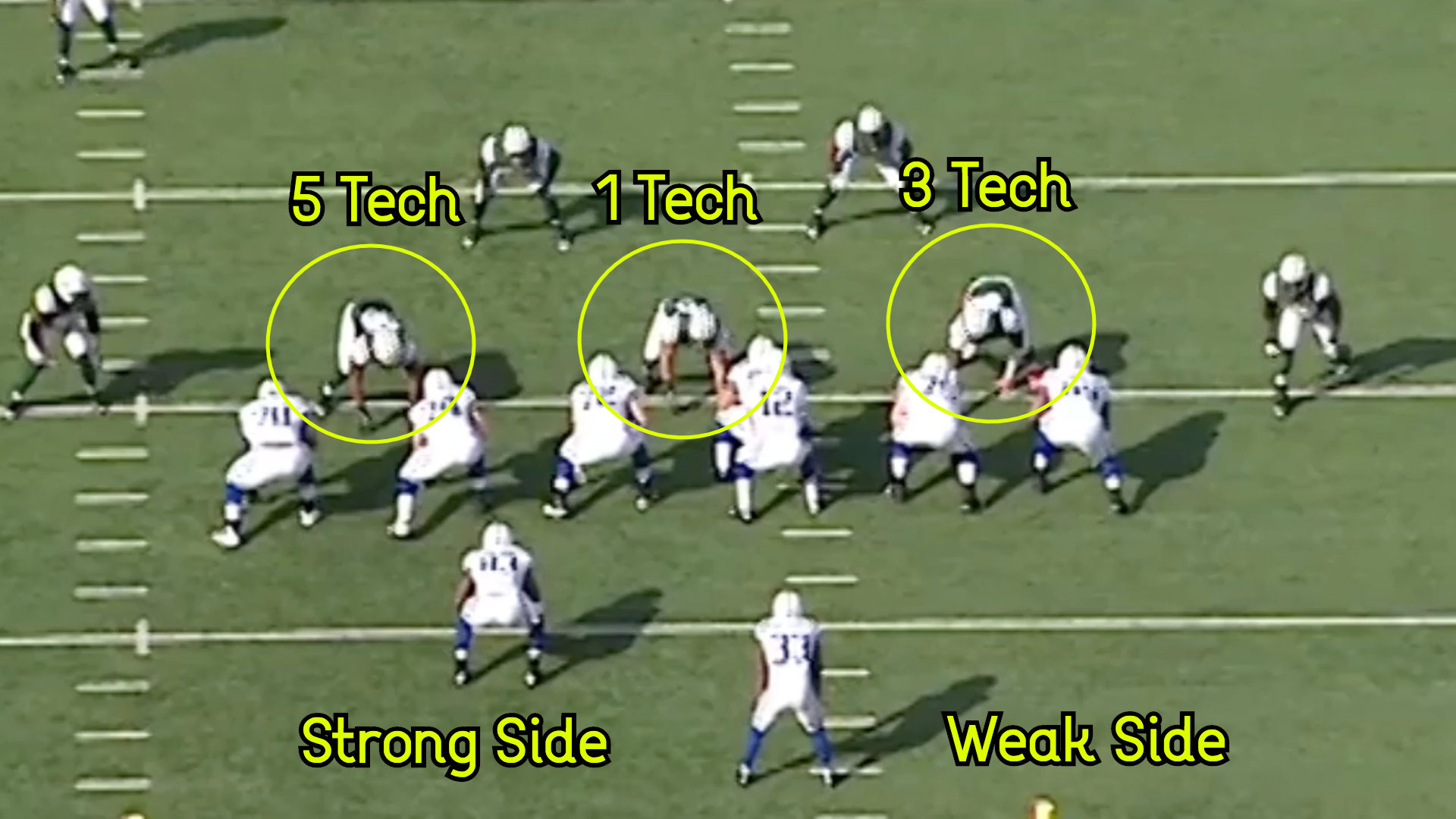 Whereas in a base 3-4, both DEs are 5-techs, who line up head over the OTs. There is also your NT, lined up as a 0-tech, head over the Center. This defense is more complex and involves more reading by the DL and the LBs. It can be really successful, but just has a lot of moving pieces. I know it doesn't seem like there's a huge difference between the two formations, but there is. A big advantage of a 4-3 Under is that it will often ask defensive linemen to one-gap, rather than two gap (although you could do either). This makes a defensive lineman's job much easier, as they can focus on getting upfield and causing penetration, more so than reading either gap. This also makes it easier on the LBs, as they only have one gap to fill, rather than two lanes to read. This formation will just simplify things for our front seven, and have us thinking less, and potentially playing faster.

Let's look at the 4-3 Under again, and see how Weaver can put the Texans into a position to succeed. Brandon Dunn can play the 1 tech in the middle. I would line up Ross Blacklock on the strong side of this formation, as he can take on double teams greatly. This can keep JJ Watt on the weak side, where he doesn't have to deal with a double team, and can chase down the play from the backside, something he's made a living doing. I'd also put Whitney Mercilus on the weak side, the more we can conserve him for passing downs, the better. This puts Jonathan Greenard as the strong side edge defender. I'm extremely confident in his ability to stop the run, which is why I want him on this side. Then you've got Benardrick McKinney as the MIKE, and Zach Cunningham as the WILL. 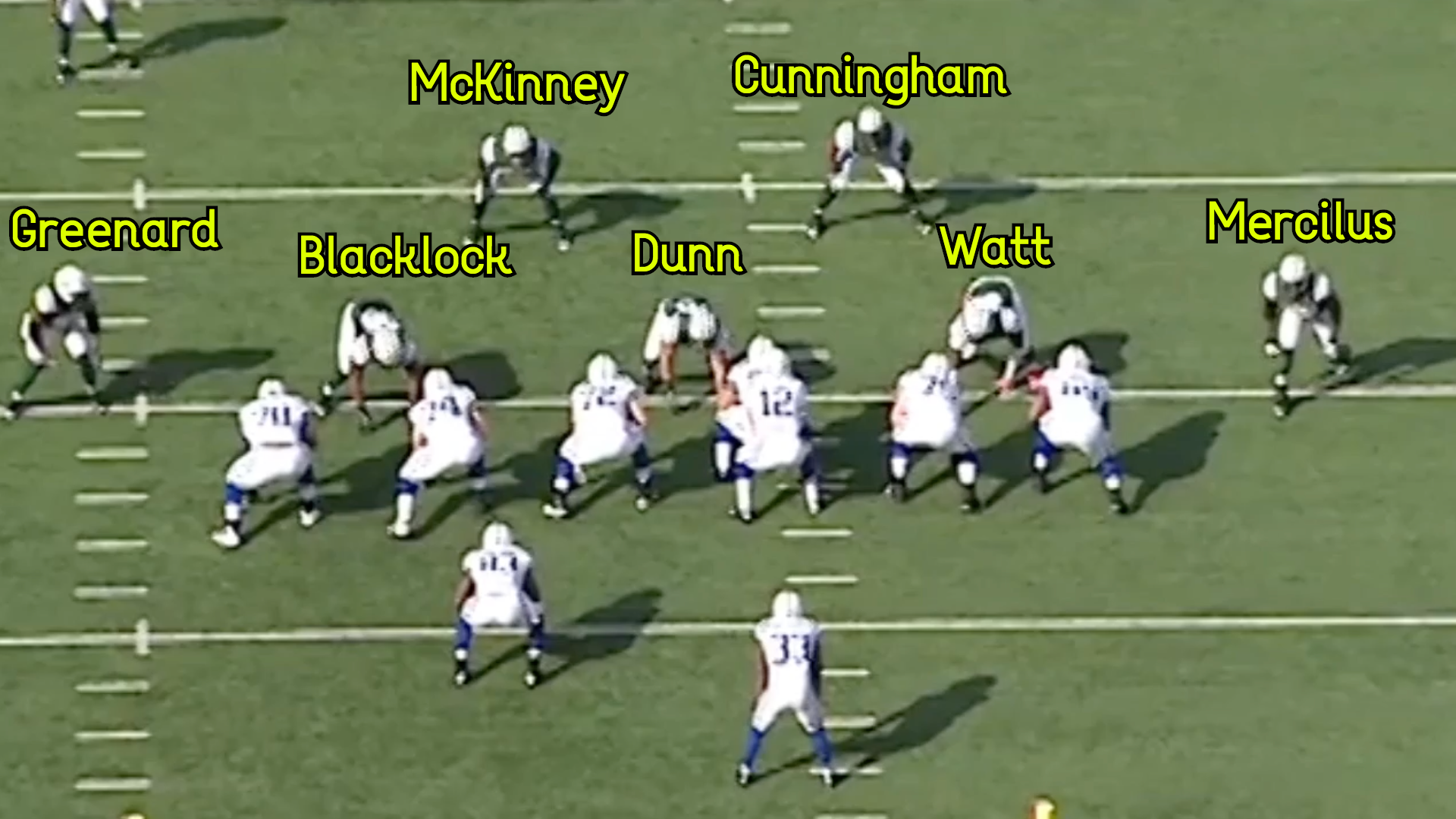 Now that we know who would theoretically line up where, let's take a look at the 4-3 Under in action. These next clips are from the 2012 Jets, when Rex Ryan was Head Coach, and Anthony Weaver was the assistant defensive line coach. Look at how the LBs are able to get downhill quickly, just focusing on one gap. A big emphasis is on the strong side edge defender (Greenard for us), look at how he's able to blow up the TE's block, and make the tackle. Greenard would embarrass any TE that tried to block him in college. He can make these plays day 1.

Let's now look at a variation of the 4-3 Under: Weaver can have Blacklock head up over the Center as a NT. Brandon Dunn can play 2 tech, over the RG. Timmy Jernigan can act as a 5 tech DE, getting his strong run defense on the edge here will be paramount. Then we can keep Watt and Mercilus on the backside again, keeping them more fresh, and in position to hold the cutback lane, and chase down the play from the backside. I'd also like to have Greenard really out wide to the left here, to set the edge against the TE. 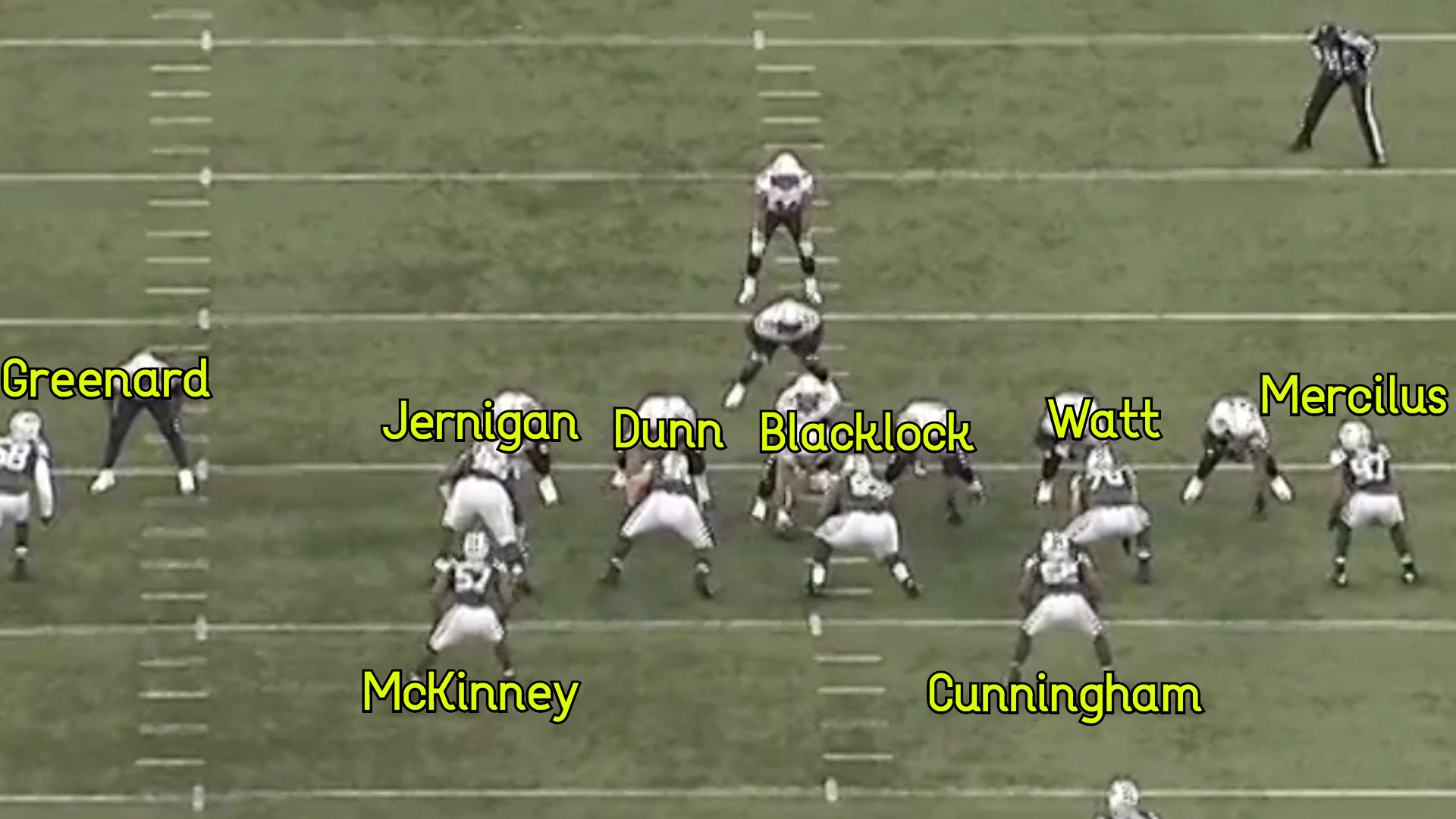 In this formation, the interior defensive linemen really need to hold their blocks and not let allow any push back, or reach blocks. Having Jernigan, Dunn, and Blacklock here will eat offenses alive. This formation really just puts Texans players in the best position to succeed. Take B Mack for example, imagine him as the LB #57. All he has to do is run downhill and be physical throwing aside that blocker, and making the tackle.

Let's look at another formation, this 4-3 Under variation has the Jets in a Dime package with three safeties. We love to play three safeties and you can easily see how we could have Eric Murray and Jaylen Watkins in the box, with Justin Reid as the single high. This formation is a great counter to the heavy formation the Seahawks are in. If it's a run, we have 5 defensive lineman and 8 in the box. But even if it's a pass, we only have 1 LB (who could be a liability in coverage) on the field, and two safeties in the box to deal with any TE in coverage. 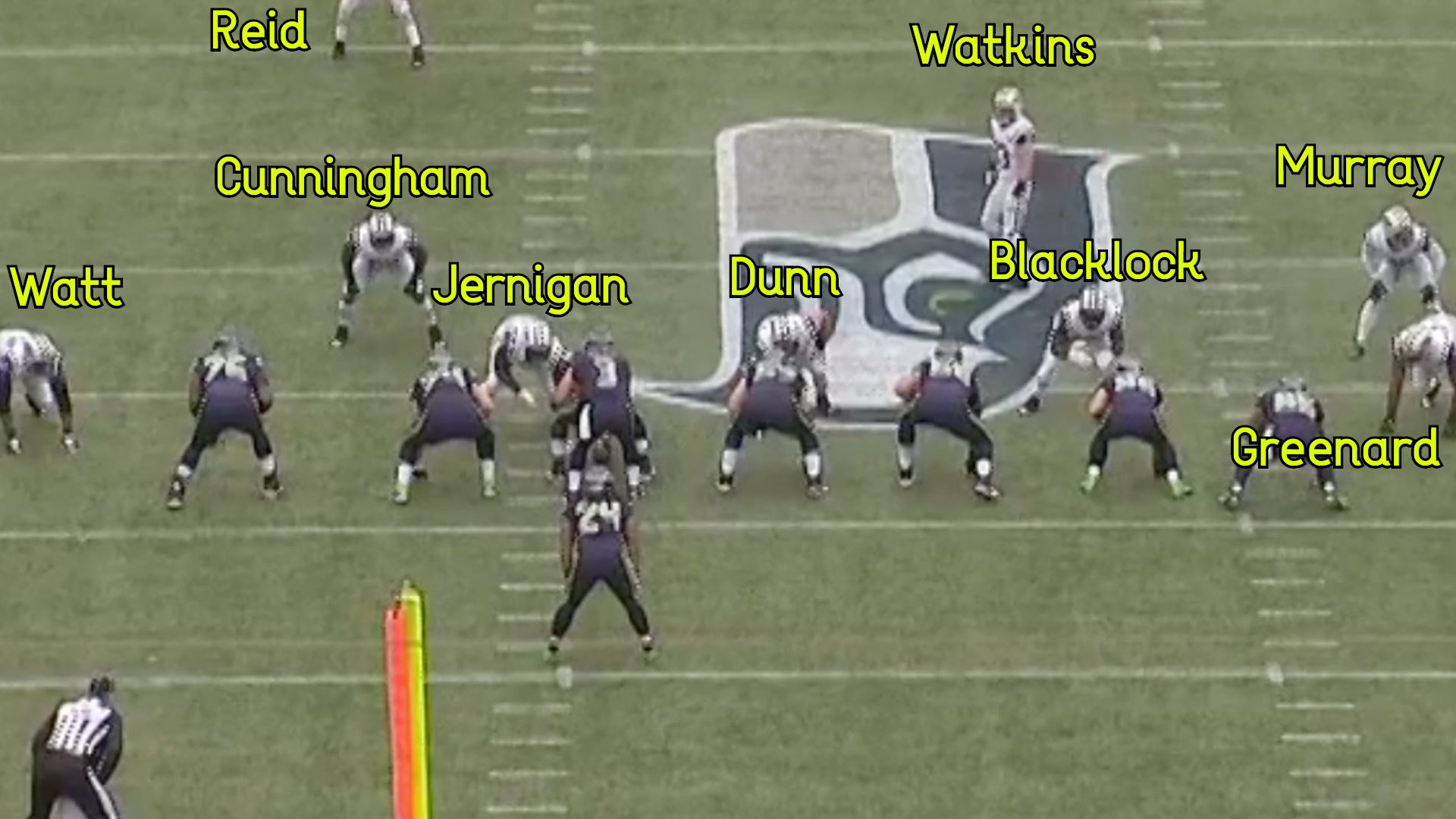 The versatility here is great and you can see during the play how a good tackling box safety will really make or break this defense. While there's definitely a good chance the Texans sign another safety, whether that be Eric Reid or someone else, they'll need that guy to be aggressive and make these tackles. Justin Reid would be great at this role too, if we can manage to acquire a cover safety (cough cough Malik Hooker please) to play single high.

Rex Ryan's other patented defense is the 46, which he took from his father Rob Ryan, famous for leading the 85' Bears to defensive dominance. This is the most aggressive defense the NFL has ever seen, crowding the box with 8 defenders at all times. It brings two extra LBs onto the line of scrimmage, and the strong safety into the box. It takes pretty specific personnel to pull off, but we can definitely use it in spurts. 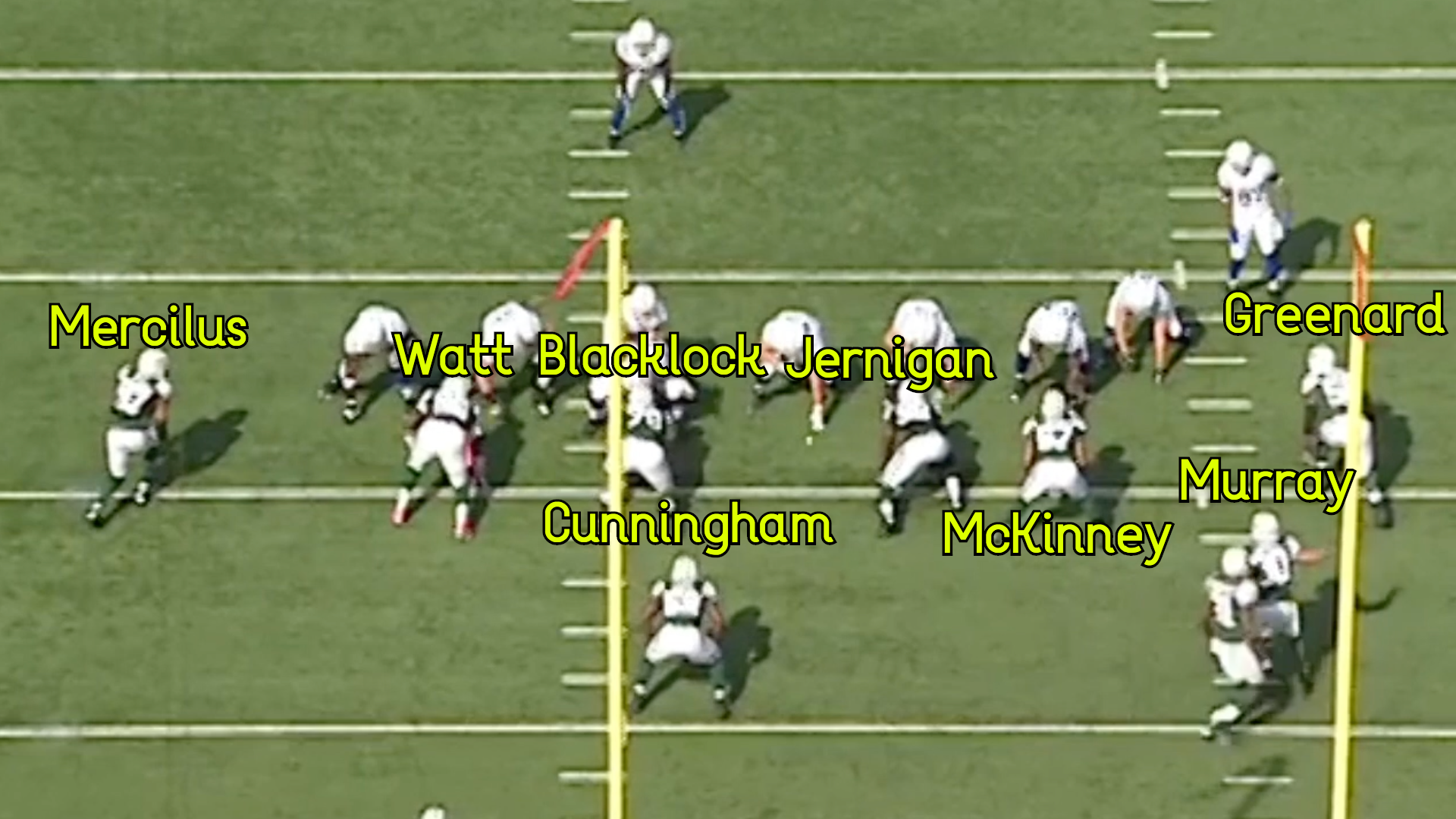 Here's an example of the 46, and how Weaver could line up the Texans in this formation. Mercilus plays the weak side edge. Watt as the weak side DT. Blacklock is the NT in this defense. Jernigan can be the strong side DT. Then B Mack is put on the line of scrimmage as the SAM LB. You've also got Greenard on the LOS playing as the JACK LB. At the 2nd level we can have Cunningham as the MIKE, and Murray as the Strong Safety or "Moneybacker".

Let's look at how this formation can help us in the run game. LB #58, where Greenard would be, sets a strong edge against the TE. DT #98, where Jernigan would be, pushes back the OL into the backfield, creating penetration. NT #70, where Blacklock would be, sheds the double team and forces the RB into the cutback lane. This is where DT #96, where Watt would be, has the simple task of just playing disciplined and making the tackle. Adding all these defenders to the box makes it so much harder for the offense. I'm excited to see if we implement this.

One more play here out of the 46, and this one comes from the 2017 Bills, when Rex Ryan was their head coach. Weaver has the luxury of one of the deeper defensive lines the Texans have ever had. With multiple players who can fulfill these different roles and thrive. I'm excited to see how he plans to line players up, and how he will rotate them to keep them fresh. 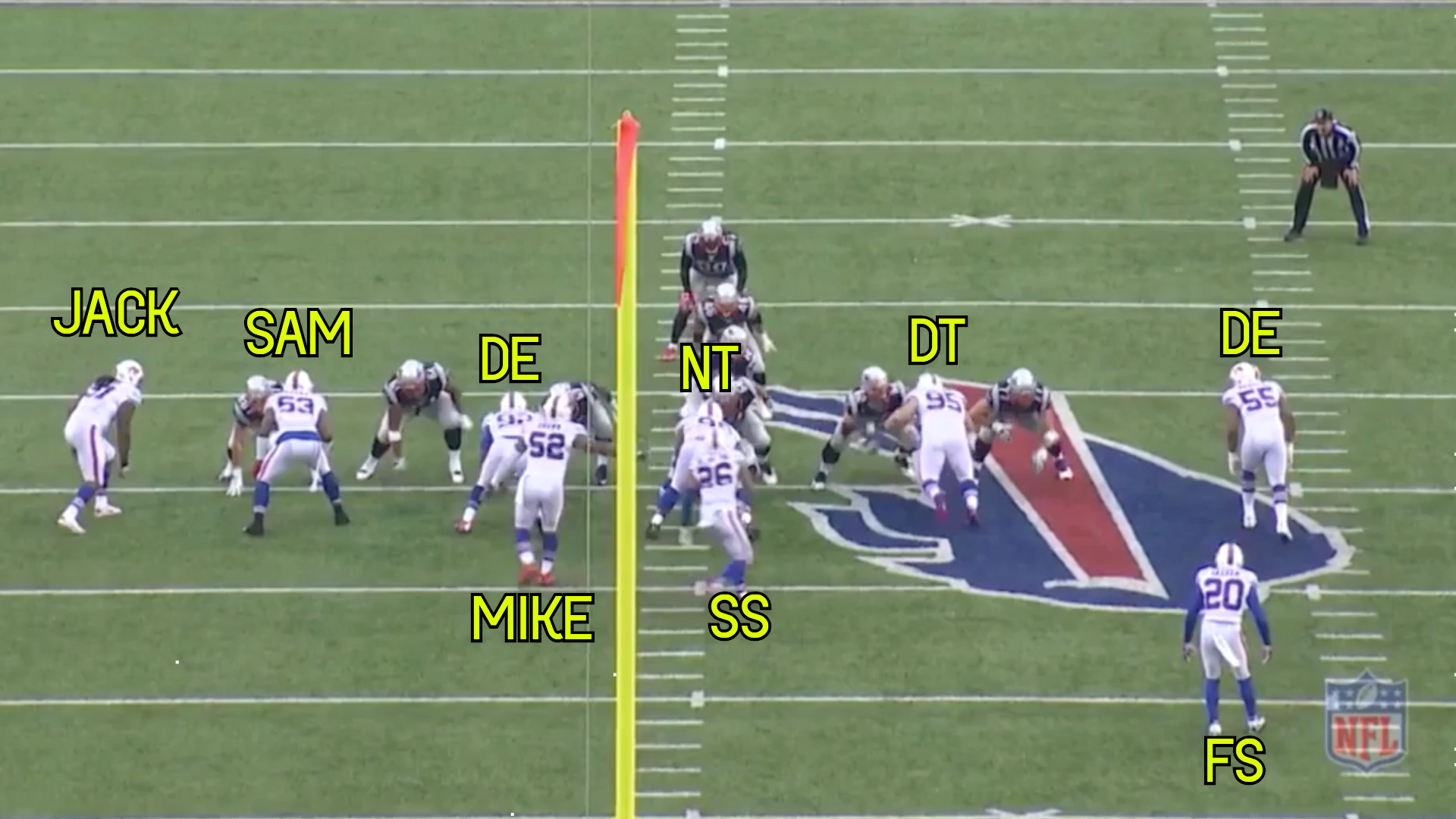 So when we heard Weaver say he wants to play an aggressive defense, we can now look to the 4-3 Under, and the 46 Bear defensive formations, and see exactly what he means. Getting into these formations out mans the offense and destroys run games.

But stopping the run game is only one part of the equation for a successful defense, and arguably, the less important part. Nowadays the NFL is all about passing the ball. And the Texans haven't exactly been great at stopping teams from passing in recent years. Personnel is one thing (which has definitely improved) but changing the scheme and becoming more exotic, another word Weaver has mentioned, will go a long way.

In part 2 of this series I will be looking at how Weaver can impact the passing game through some of Rex Ryan's patented blitzes. If you love well disguised and timed blitzes, I've got a treat for you. Part 2 will be out Thursday and spoiler alert, it's gonna be a fun read.