Houston Texans OLB/DE Whitney Mercilus has long been one of the more underrated EDGE defenders. Drafted by the Texans back in 2012 with the 26th overall pick, Merc is one of the longer tenured guys on the team. His veteran leadership is something that is very tough to put a price on, but a huge reason for his new 54m dollar contract. In terms of on the field talent, Merc has always thrived as the Robin to a Batman. His success as a pass rusher depends a lot on the players around him, and that's okay, we just need to put him in a position to succeed. This article will look to explore how we can do so, to maximize his talents, by looking at his most recent tape in the 2019 season. 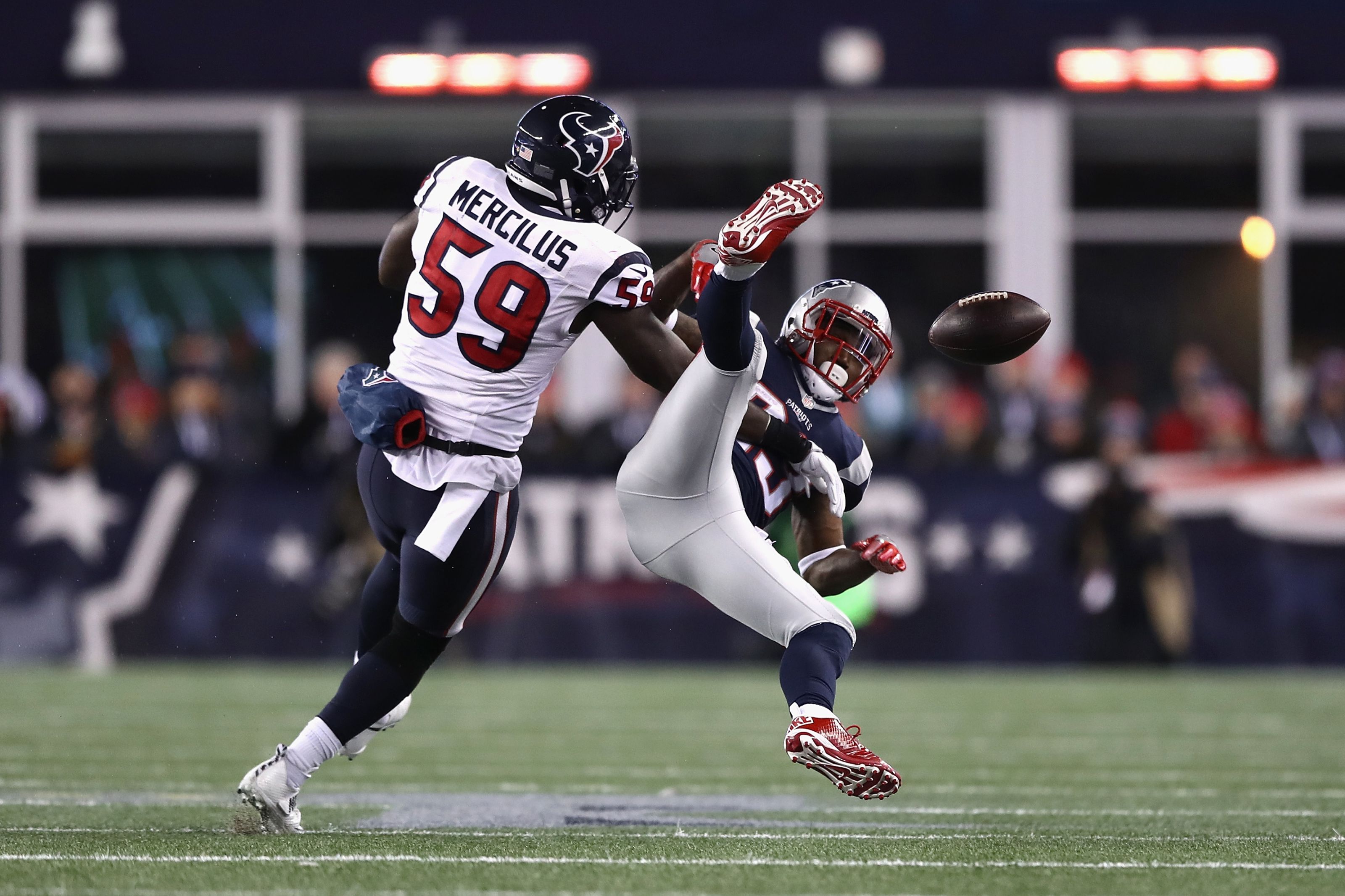 Let's first start by analyzing how Merc finds success in getting after the Quarterback. Merc was never the freak athlete type of pass rusher, rather utilizing nuanced technique to beat offensive tackles instead. I love that style of pass rusher, because athletic gifts can only get you so far, and it also leads to an elongated career, if you're technique is always on point.

The first pass rush move I want to look at is Merc's spin move. He opts to use an "instant spin" where instead of rushing downfield, then spinning inside, he throws out the spin right from the snap. This can lead to beating the OT almost instantly, and not allowing the QB to get the ball out quickly. Look at how he embarrasses Jaguars LT Will Richardson with it on this sack. After taking two steps off the snap, Merc sees Richardson shoot out his hands to punch him. He counters by pushing away Richardson's left hand with his own left hand, getting him off balance. Then Merc contorts his body away from Richardson, minimizing the surface area he can be punched. Once his body has completed the 360 degree turn, he uses his right arm to hook around Richardson's hip and lock him out of the play. This negates Richardson's ability to recover and push Merc out of the play. Poor Gardner Minshew gets crushed from the blindside, never knowing what was coming.

Another staple of Merc's pass rushing repertoire is his stab, dip and rip move. Up against Saints LT Terron Armstead, Merc shoots out his left hand to try and get Armstead to raise his hands. It works and Merc has him right where he wants him. He lowers his left shoulder and uses his left arm to hook underneath Armstead, ripping past him and making it hard for Armstead to get hands on him. It's a simple move, but if executed correctly, can be devastating.

The last major move Merc uses often is his long arm-rip. Again against LT Will Richardson, Merc shoots out his inside arm (left) into Richardson's chest. He's using the idea that one arm is longer than two, and trying to make it hard for Richardson to get hands on him. Richardson does the same thing though, and gets hold of Merc's collarbone with his left arm. To combat this, Merc uses his right hand to try and pry Richardson's grip loose, but ends up using his rip move with his left, to fully get off the block. Minshew had a rough day back there...

Why he needs help

So I've been showing that Merc's technique can be very deadly, and he does well to pair his hands to defeat blocks, why does he need help if he can do this so easily? Well, this is why you can't rely on highlight tapes to evaluate a player. I only showed you 3 reps, and could show you the other 4.5 sacks he had last year, and you could think that he was an absolute monster all year. That was not the case unfortunately, as he had a ridiculous 5 sacks in his first 4 games, then only 2.5 throughout the next 10 games. That inconsistency can be broken down into three categories. Competition, lack of bend and interior rush. First, competition: 4 out of his first 5 sacks came against awful offensive tackles. Will Richardson (2 sacks) is the Jaguars backup LT, and their version of Chris Clark. Greg Little (1 sack) is a raw rookie 2nd round pick for the Panthers, who was thrown to the fire with little time to develop. Trent Scott (1 sack), just WHO? Finally, he did have that one sack vs Terron Armstead, one of the best LTs in the game, but the rest were against utter trash. Yes, he did his job in beating up on lesser tackles, I'm not taking that away from him, but for someone being paid 54 million dollars, I need him to produce against at least starting level tackles throughout the entire season.

After those first four games, he would play better tackles such as: Jake Matthews (Falcons, 1 Pro Bowl), Eric Fisher (Chiefs, bad), Anthony Castonzo (Colts x2), Cam Robinson (Jaguars starter), Kolton Miller (Raiders, bad), Marshall Newhouse (Patriots, who?), Garrett Bowles (Broncos, AWFUL), Donovan Smith (Bucs, solid) and Taylor Lewan (Titans, good). While there are some good names on this list, they aren't world beaters by any means, and still a number of bad tackles that Merc should've beaten up on. He had 2.5 sacks during this stretch, but the context to those sacks is very important. Here they are:

The first, against Anthony Castonzo, was his best of the bunch. After reading the run fake, Merc takes a step outside, then spins inside to get a half sack. But there were already two Texans defenders about to sack Brissett, did Merc really do anything that wasn't already about to be done?

He had two sacks against Tampa Bay, and this first one he got free on a stunt. This tackle-end stunt is set up for him to succeed, as Carlos Watkins barrels into the LG, occupying him for a second while Merc can build up speed and ram into him. He delivers a great blow into the chest of the LG, and gets past him. But then he gets pushed past Jameis Winston, and props to Merc for fighting back into the play, but Jameis held this ball for over 5 seconds. This sack should be given credit to the coverage on the back end, more so than Merc in my opinion.

The last sack was really just nothing special. The Texans send a blitz and Merc is left containing Winston. He's up against the LG and C and they don't really do a good job to block him. As the blitz pushes Winston out of the pocket, Merc is there to run him down and "sack" him before he could get to the sideline. This is your super valuable -1 yard "sack", that looks great on the stat sheet, but how impactful was it really?

Apart from those uninspiring sacks, Merc just wasn't able to beat average to above average tackles on a regular basis. Yes, with JJ Watt getting injured, Merc had to deal with more double teams than you'd like. But even on his 1-on-1 reps, he was getting manhandled. If a tackle gets hands on Merc first, it's essentially over. For as good as he can be with his technique, he needs to land the first punch to succeed, and his counter to get the tackles hands off of him is rarely effective. Cam Robinson never allows him to even sniff Gardner Minshew, big difference between dealing with Richardson and Robinson.

Against Jake Matthews, a fine tackle, but nothing special, he tries to chop rip to the outside but it's completely nullified. Matthews is just too strong for Merc, who lacks power in his moves. He's always been finesse, but his moves are losing their effectiveness.

The biggest issue I saw with Merc, is his lack of bend to the QB. He's never been a great athlete, I said that before, but you still need some basic athletic traits to succeed. Bend is one of the biggest ones, and on these plays, you can see how easily he gets pushed past the QB, and isn't able to get a pressure, hit, or sack. He can win to the outside, but he's still got to finish the sack, by flipping his hips toward the QB, getting low, and clearing a path. He just wasn't able to do that whatsoever last year.

To combat this wide looping rush, Merc would need help from the interior DL, to collapse the pocket and push the QB backwards and into the waiting Merc. That can be seen on the these two sacks, against Will Richardson and Greg Little. Look how wide Merc's rush is, he's not able to bend at a sharp angle, and if not for the QBs running backwards to avoid pressure from Brennan Scarlett and DJ Reader, Merc doesn't get a sack here.

Merc's success last year was tied to DJ Reader being great, more so than JJ Watt being injured in my opinion. Reader developed some nice pass rush moves, early in the season, and that presence from the interior is something we've always lacked. In his first five games he had 2.5 sacks, coincidence that Merc had 5 sacks in that stretch? I think not. Like we saw on that Panthers sack, DJ Reader was able to push the center backwards, compromising the pocket and forcing QB Kyle Allen to run right into Merc. They became a deadly duo, and together were more productive than JJ Watt himself. However, after those first five games, Reader's pass rushing productivity fell off a cliff, he didn't finish with any more sacks throughout the season, and Merc felt that drop off most heavily. He didn't have his partner in crime anymore. At the beginning of this article, I stated that Merc has always been the Robin to a Batman. While I'm sure most of y'all thought I was talking about JJ being Batman, DJ Reader was actually the Batman last year. Without him collapsing the pocket, Merc wouldn't have been half as effective as he was. So garnering an interior pass rush next year, is going to be pivotal to helping Merc out, and getting the most out of him. Guys like Charles Omenihu and Ross Blacklock need to step up. Charley O showed a lot of promise collapsing the pocket with bull rushes last year, and while Blacklock is a raw pass rusher, he is the most athletic of the bunch and has all the potential in the world in that aspect. Getting consistent pass rushing productivity out of those two, is going to be the most important thing to make that 54m dollar contract look comprehensible. GIVE MERC THE HELP HE NEEDS.