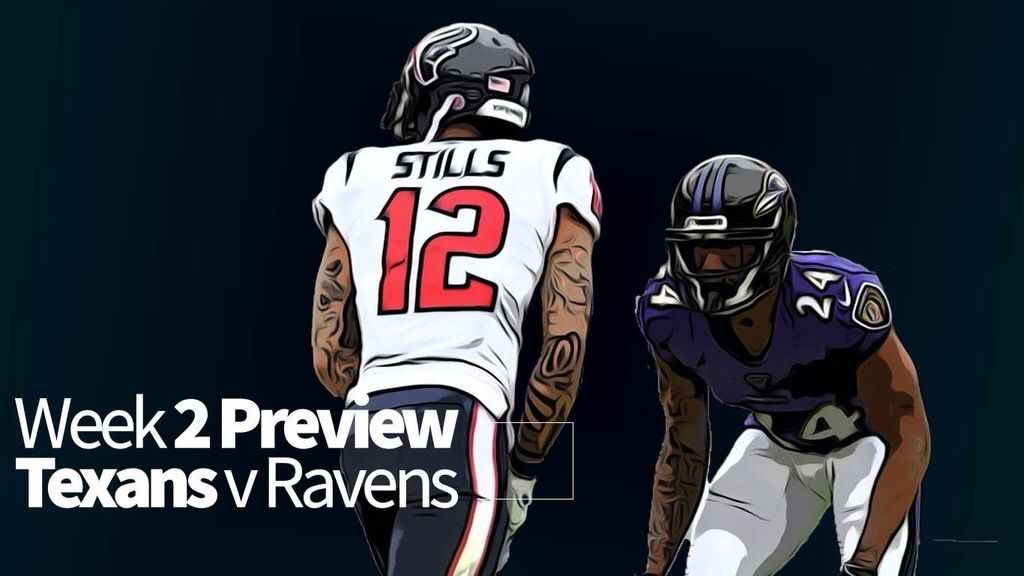 The Houston Texans are looking to bounce back in Week 2 after looking outmatched against the reigning Super Bowl Champions, Kansas City Chiefs.

Clean up the Penalties and win the turnover battle

The Houston Texans have a good shot to get their first win on the season against the Baltimore Ravens if they win the penalty and turnover battle. This probably goes without saying, but it's important to take into consideration that the Texans lost the turnover battle in Week 1 after the defense forced Deshaun Watson to throw an errant pass that was picked off by the Kansas City Chiefs' secondary.

Houston also had five penalties for a total of 37 yards compared to the Kansas City, who only had one penalty for five yards. Texans had a neutral zone infraction, a defensive pass interference, a horse-collar tackle, and an illegal contact call on defense. Three of those penalties gave the Chiefs automatic first downs.

The defense can't afford to give opposing offenses opportunities to stay on the field or help them move down the field with ease. It's no coincidence that the Chiefs' offense scored in those three drives that were extended by penalties. The defensive penalties allowed the Chiefs offense to score as they went touchdown, field goal, and a touchdown to put up 17 points on Houston's defense.

The Texans' worst drive as a defense was to end the first half after Houston missed their field goal attempt. Zach Cunningham was called for a horse collar tackle to put the Chiefs in field goal range and an illegal contact penalty that advanced the offense all the way to Houston's 11 yard line for the Chiefs to convert a field goal to end the half.

Coach Bill O'Brien highlighted in his conference with the local media that both battles would be key to helping the Texans chances of winning in Week 2 after how NFL teams fared in Week 1. "I think it's the teams that played the cleanest – the teams that won the penalty battle, won the turnover battle, I think they won 85 percent of the games this week. The teams that won the penalty battle but maybe they lost the turnover battle, they won I think like 80 percent of the games."

O'Brien admitted defensive penalties will occur throughout the game, but the mental mistakes can be prevented. "I think that's a big part of what is fundamentally making sure that we eliminate the administrative penalties – the false starts, the illegal formations, the neutral zone infractions. You're going to get holding calls. You're going to get DPIs. Those things are going to happen. Illegal contacts – those things may happen. But it's the mental mistakes that we have to really clean up because the teams that really did that well, they won for the most part."

The Houston Texans offense looked out of sync, for the most part after David Johnson scored a rushing touchdown in the first down, and the offense didn't score again until they were down 31-7. The offense scored two late touchdowns in the fourth quarter, but the game was out of reach.

The offense can't go without scoring in the second and third quarters against the Baltimore Ravens and expect to still be in a position to win the game. The Texans will have to come out with urgency because the Ravens will be ready to punch them in the mouth again like they did last season.

The Ravens have a tough and feisty defense that can make life difficult for any offense. It'll be important for the Texans to adjust accordingly with their run game with Duke Johnson likely missing at least this week with an ankle injury according to Ian Rapoport.

Houston might need to rely on C.J. Prosise or Scottie Phillips from the practice squad to help the Texans rushing attack. Houston will have a tough time moving the offense down the field if they are unable to get any semblance of a running game going.

It'll be interesting if they include some quarterback runs to open up the offense. Deshaun had six carries for 27 yards and a rushing touchdown in Week 1. The rushing attack could use a bigger dose of Watson depending on how the running backs fare against Baltimore's front seven.

When it comes to the Ravens defense they are built on speed across the board and have one of the better secondaries in the league. Linebacker Patrick Queen showed he belongs in this league against the Cleveland Browns in Week 1, and will likely be who covers Houston's running backs on passing plays.

Even if it is Prosise being used more as a decoy with a limited knowledge of the playbook. It would be smart to line David Johnson and him up in the backfield to go give the Ravens defense some different looks to keep them honest.

Meanwhile, Marlon Humphrey and the Will Fuller matchup will be worth watching; Fuller may not come off as a physical receiver but he doesn’t shy away from the challenge.

Fuller's release off the line of scrimmage is one of the best in the league, and his route running is so crisp no matter how good of a corner you are. It will be a tough task to stick with him given those attributes when combined.

Talent has never been an issue for Fuller and his offseason workouts have shown a stronger player than in previous seasons. Fuller has to follow up with a great game after being the only Texans' receiver to go over 100 yards in the season opener.

Ravens don’t have only one guy, they have a group of guys that can get after the quarterback. Calais Campbell had a great showing this last week, and the Texans should be familiar with what he brings as a pass rusher in his stint with the Jacksonville Jaguars.

Matt Judon gave this team fits last year, and Brandon Williams is a top 3 nose tackle in this league. Williams has the ability to eat up his blockers in the run game and free up the other guys on the defensive line.

The Houston Texans offensive line against the Kansas City Chiefs looked rusty, and the right side of the line was not in sync. It's understandable as Tytus Howard is coming off of injury, and has only played a total of nine games in the NFL. Nick Martin had a bad game, and Zach Fulton struggled against Chris Jones the entire game.

There's hope they will get better as the season progresses, but last week shouldn’t make Texans fans feel good about the right side of the line heading into this game.

Deshaun Watson struggled heavily against the Ravens in 2019, and you could make the argument it was his worst game since entering the NFL. The Ravens like to disguise their coverages, they will make you think they are running zone yet they are playing man and vice versa.

Watson wasn’t awful against the Chiefs but he wasn’t amazing either. He will have the opportunity to right the ship this Sunday against a very good Ravens defense, but it certainly wont be easy.

Defense can only improve after Week 1

Houston Texans' defense looked limited in Week 1, but there were some positives takeaways from their performance.

The Texans won’t be able to relax this week as they take on the Ravens' high octane offense, who thrashed the Cleveland Browns in Week 1. The Ravens are an interesting team as last year their success was determined by the run game, this past week they attacked through the air and Lamar Jackson looked more comfortable throwing from the pocket. He was decisive and accurate when hitting his tight ends and wide receivers.

With that being said, shutting down the run is the way to slow down the Ravens offense, and based on what we saw from the Houston Texans run defense against the Kansas City Chiefs; there should be some concern that the Ravens are going to try and establish the run game early.

Are there adjustments the rookie Defensive Coordinator Anthony Weaver can make to slow them down?

P.J. Hall looked to bring some juice in the second half of the Chiefs game, so you have to wonder if they will start with a rotation of Dunn and Hall in the interior. Charles Omenihu looked overmatched in the trenches and wasn’t able to get off his blocks, and J.J. Watt was gassed in the first three series.

Bernardrick McKinney and Zack Cunnigham looked sluggish against the Chiefs, so let’s hope they are on their A-game this coming week. The inside linebacker group is a position of strength, but they will need to come out by setting the tone early.

The Ravens passing game brings quite a bit of concern when looking at the mismatches they can create for opposing defenses. They have three tight ends that would be starters on almost any team in the league.

Mark Andrews is a very gifted athlete at tight end, his first touchdown of the season was an acrobatic one-handed grab mid-air while maintaining control of the ball. The tight ends are going to be a problem for this defense, and it'll be interesting to see who goes up against them. Could Dylan Cole finally return to the active roster after recovering from a torn ACL last season?

Meanwhile, Marquise Brown looks more like a complete wideout this year. He has that speed factor that makes receivers dangerous and he showed in his rookie season that he doesn’t shy away from physical corners.

Bradley Roby shadowing Brown will likely be the best defensive back to hold up against him, but the Ravens have the offense to make life difficult for the Texans.

The Ravens' offense poses a problem for almost every team in the league, and the Texans defense won't be the exception. Houston will have a tough team on their hands as they host their first opponent at NRG Stadium for the 2020 season.