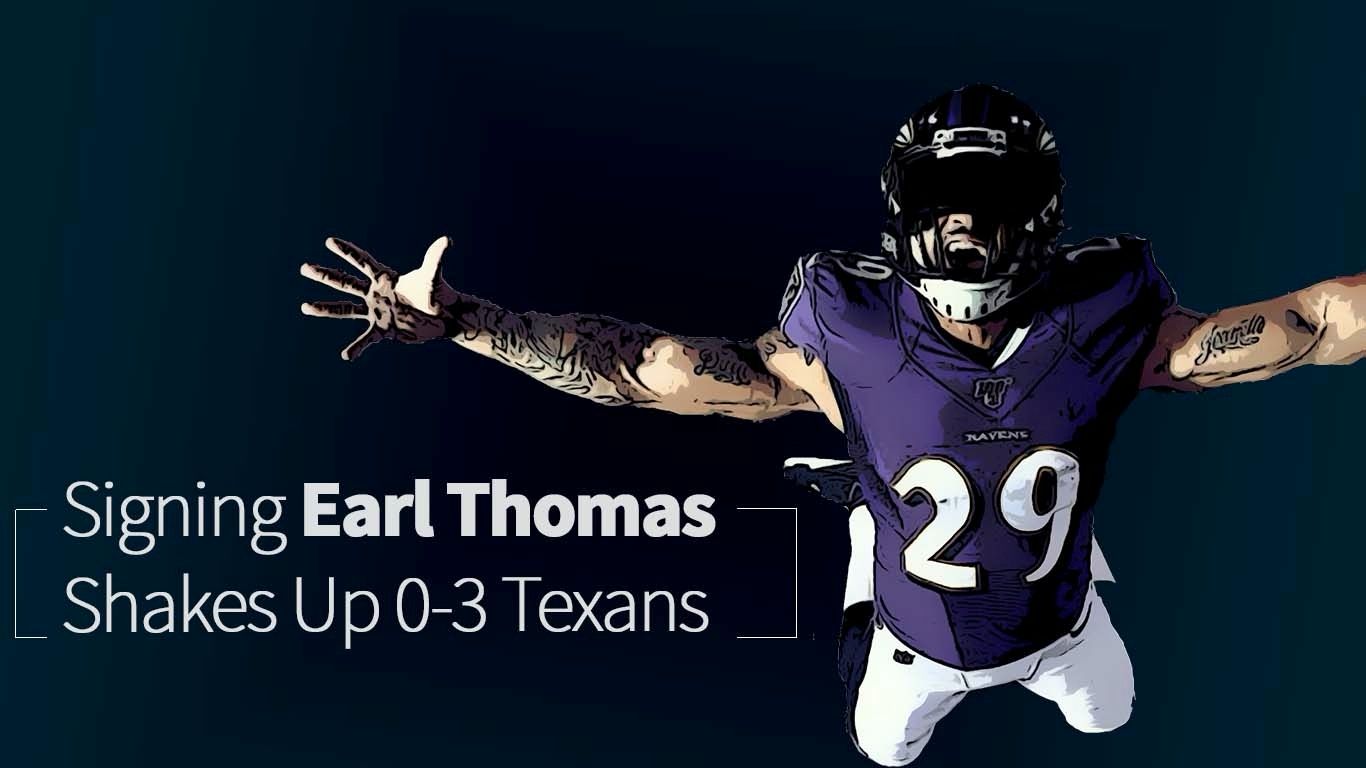 The Houston Texans seem poised to sign former All-Pro safety Earl Thomas to a deal after a rough 0-3 start to their season.

How did the Houston Texans and Earl Thomas III get here?

The Houston Texans had to make a change after starting with an 0-3 record. It seems they're making a huge one as they are potentially adding one of the more prominent names available in free agency with Earl Thomas III.

The Texans are reportedly bringing in a few safeties this upcoming week, according to Ian Rapoport of NFL Network. However, Thomas appears to be "signing more likely than not," according to Adam Schefter of ESPN.

Adding Thomas makes sense from an outside perspective after Houston had an interest in the past. The Seattle Seahawks were unable to work on a long-term deal after Thomas' holdout, and Thomas left through the backdoor after his golden years in Seattle.

Deshaun Watson and Thomas sharing one of the biggest agents in the league in David Mulugheta, also made it easier for Houston to get a meeting at the table in 2019.

However, the conversation between Bill O'Brien and Thomas wasn't a productive one with Thomas telling Dan Pompei of The Athletic, “Our conversation was not what I thought it was going to be. It was him not believing I still wanted to play football.”

Thomas ended up signing a four year deal with the Baltimore Ravens worth up $55 million with $33 million guaranteed. That deal made him one of the highest-paid defensive backs in the league, but his stint in Baltimore was short-lived.

The Ravens decided to waive him this offseason after getting in a scuffle with former Ravens' teammate, Chuck Clark. Matters got even worse when Peter King of NBC reported that Thomas wore thin on his teammates throughout his short time in Baltimore with him failing to be punctual to practice, and often looking unprepared on the field.

These incidents don't make Thomas a bad person, but his poor decisions forced his teammates to ultimately vote him out of the Ravens' organization for being labeled a bad teammate.

That may or may not be through no fault of his own. Thomas has never been an outspoken, fiery leader like the honey badger, and has preferred to fly under the radar.

Thomas told Josina Anderson in a sit-down interview with ESPN in 2019, that his teammates in Baltimore were a lot different than in Seattle when he first arrived to the Ravens.

"It's definitely different. I'm definitely not comfortable in the meetings, especially when they put me in the spot. I'll be like, bro somebody tell me, I don't know. It's a little pressure so that I can stay in my playbook. So they call me out and most of the time I don't know."

Thomas clarified he is more of a visual learner than getting put on the spot in meetings.

We all know how it ended up between Thomas and his teammates, but it's entirely possible that it was a culture shock going from the Seahawks' locker room to the Ravens. Thomas was used to being the man behind the scenes and no one questioning his method of learning the playbook in Seattle.

However, the Ravens paid Thomas to be the player he was in Seattle, and his best days as an elite safety may be behind him after his knee injury that prematurely ended his last year with the Seahawks.

There is very little patience for an organization like the Ravens that paid an All-Pro safety top dollars for the contributions they expected to see but never received.

Earl is still an excellent football player on the field, but he does have the "proceed with caution" sign on him for many football teams after his latest departure from a contending team in the same division as the Houston Texans.

How does Earl Thomas fit with the Texans?

This move signals the intention of shaking up the roster with Justin Reid, Eric Murray, and Michael Thomas being the only other safeties on the roster. The Houston Texans were reported to be interested in Thomas after placing A.J. Moore on the injured reserve with a hamstring injury.

However, Houston wouldn't be entertaining the notion of signing Thomas if they were happy with what they have seen from Eric Murray early on.

The expectation should be for Murray to move on down as the third safety on the depth chart and be on the field when the defense requires three safeties on the field.

It would seem odd to bring in a player of Thomas' pedigree if he isn't starting alongside Justin Reid from here on out. A player like Thomas doesn't sign with a team at this point of his career to sit on a bench as a rotational player, a man with his resume has pride and will want to see a significant amount of snaps early on.

Lonnie Johnson had been mentioned as a possibility at safety, but he remains more of a project with his initial background of being a cornerback.

Texans are looking to turn their fortunes around quickly; If Houston wanted to make a minor move, the Texans could have just promoted Jonathan Owens from the practice squad. It looks like the Texans might want to go another direction with the starting safety position across from Justin Reid

Is signing Earl Thomas III a smart move or a sign of desperation? Both?

There is no question that Earl Thomas can help an 0-3 team like the Houston Texans. However, the Texans had the opportunity to sign him right after he was waived, but it's not until now that they kicked the tires on possibly bringing him into the fold.

It's important to point out the Texans won't be getting the "Legion of Boom" version of Earl Thomas at 31 years of age, but he is still a talented cover safety that can help this secondary.

Signing Thomas doesn't come without its risks, but it's a big move for a conservative front office in Houston. The Texans don't make aggressive moves often in free agency. The last big splash signing the Texans occurred when Houston signed Tyrann Mathieu after the Arizona Cardinals waived him in that offseason.

Mathieu, however, had no prior history of being an issue for his previous team. This feels like the first move the Texans have made that goes against everything they look for in a player for the best interest of the team.

This move certainly reeks of desperation, but it is a move that could pay off for the Texans, given that they are already down 0-3. What's the worse that could happen? The Texans are against the wall and have to find a way to get out of the hole they dug themselves in, and there is no way they'll overcome it without talented players.

The Texans had Tyrann Mathieu, Kareem Jackson, D.J. Reader, and Jadeveon Clowney when they overcame an 0-3 start in 2018. Houston needs talented players on their roster if they plan to make a run in the 13 games remaining.