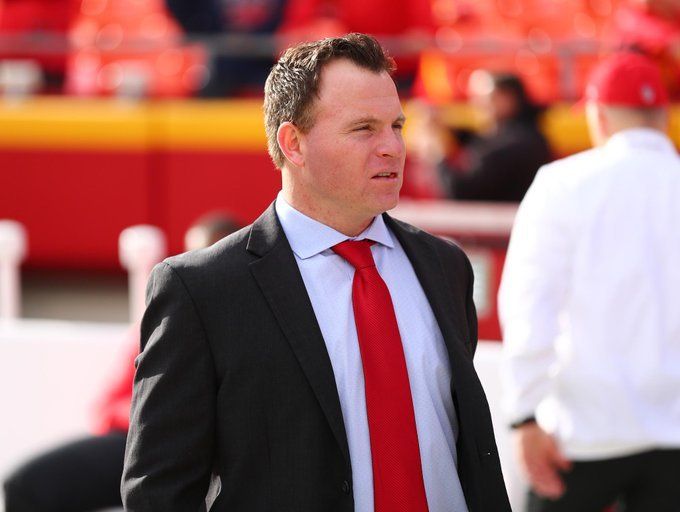 Welcome back to my series on potential Houston Texans GM Candidates. I’ve taken an extensive look at Ed Dodds, Colts Assistant GM, as my #1 candidate for the job, and if you haven’t read that article, check it out here he’s certainly still the most qualified candidate, in my opinion. But today we are here to talk about the next candidate, and that is Chiefs Director of Player Personnel, Mike Borgonzi. Let’s take a look at why he should be a top option to run our Texans.

Borgonzi sports the valuable “former player” badge, which players always seem to love. A fullback at Brown from 1998-2001, Borgonzi was on NFL team’s radars until an injury ended his playing career. While he never truly gained NFL experience in that way, he was always seen as a leader on and off the field – possessing qualities that led him to be the sole captain of his high school team.

Why am I even bringing this up? Well I think it speaks to who he is as a person, and after having BOB and Jack Easterby running this team, we can certainly use a leader who is unselfish and Borgonzi is expected to be that kind of thinker who will put the good of the team over his ego.”

Moving on, Borgonzi got his chance in the NFL world in 2009 where he was hired as the College Scouting Administrator for the Chiefs. What’s impressed me the most about Borgonzi is how quickly he has risen the ranks, being promoted six times in just 10 years. That again speaks to his character traits. The dude is a worker, he is never content until he’s at the highest level, and he can continue that rise with the Texans as General Manager. 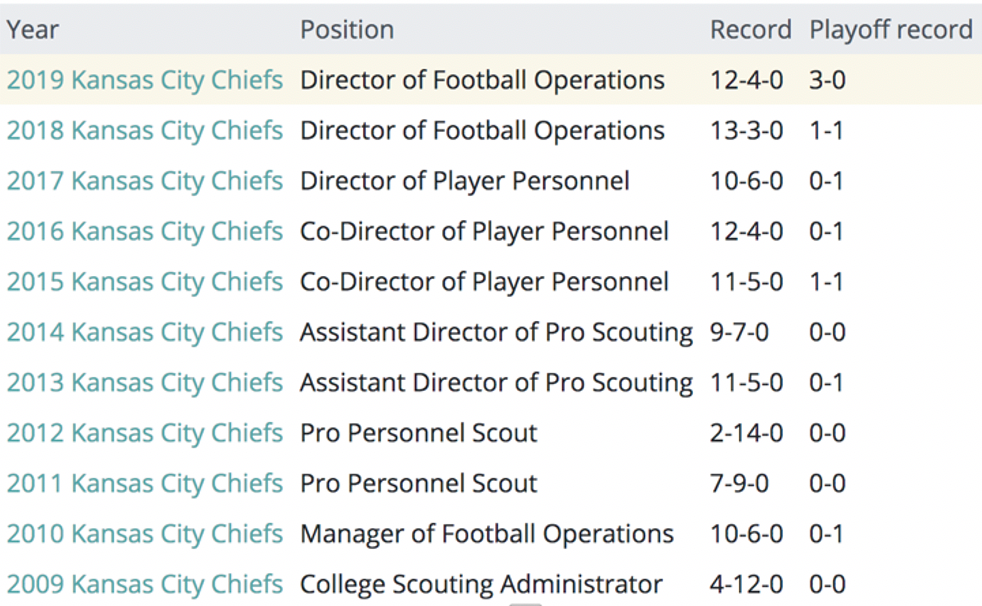 In addition, I like that Borgonzi has had many mentors to learn from, and thus gained many different roster building philosophies. He learned under former Chiefs GM Scott Pioli, who has Bill Bellichick influences from their time together building the Patriots dynasty. They believed in prioritizing versatility and smart players, something that sounds a lot like BOB. From what I’ve read though, Borgonzi is not as “Patriot thinking” however, he still values versatility and high football IQ, but he doesn’t let that outweigh pure talent. 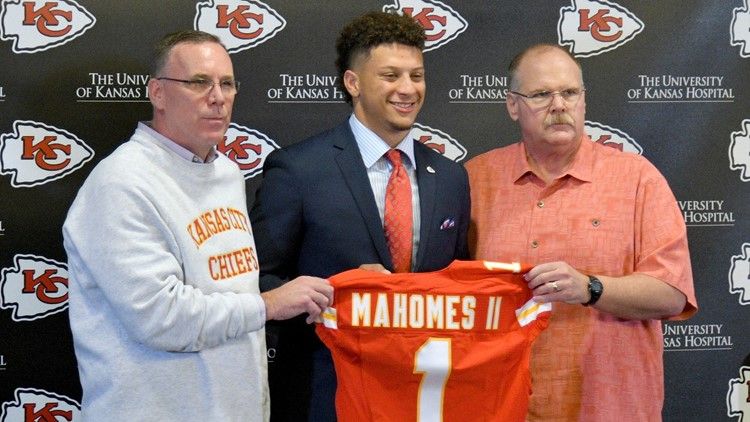 Later in Borgonzi’s career he got balanced out by learning from John Dorsey, who has a very aggressive mindset and will look to add talent whenever possible, at all three stages – free agency, the draft and trades.

They didn’t have first round picks in 2019, 2018 and 2016, so in this past decade their only real “miss” was in 2011 when they took Jonathan Baldwin. The Texans have had success with their first rounders, especially under Rick Smith, and Borgonzi would bring that same skillset. After 2021, the Texans will own their first round picks for the foreseeable future, and it’s paramount that we “hit” on them, to help retool this roster.

What’s equally important with scouting, however, is hitting on a few mid-late round picks, every few years, and Borgonzi has been very good at that as well. In 2011 they found valuable starters in Rodney Hudson - C (2nd), Justin Houston - EDGE (3rd) and Allen Bailey - DT (4th) all played 125+ games for the Chiefs.

In 2013 they stole Travis Kelce - TE (3rd) and his resume speaks for himself. In 2014 they found OL starters in Zach Fulton (LOL I can’t believe he used to be good) (6th) and Laurent Duvernay-Tardiff (6th). 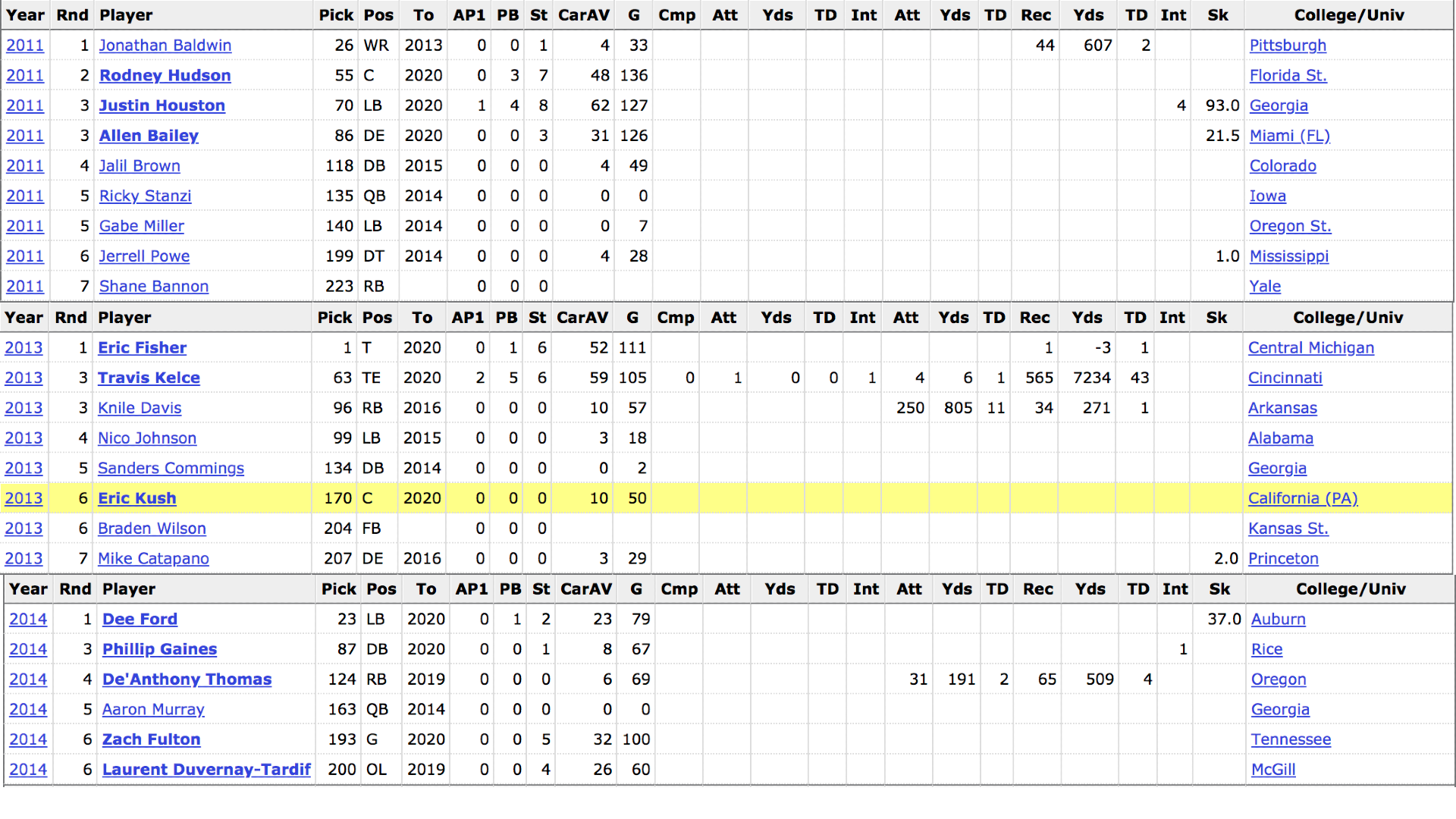 In 2015 they found nice role players with Mitch Morse - C (2nd), Chris Conley - WR (3rd), Steven Nelson - CB (3rd). 2016 they showed a willingness to take on guys with “character concerns” and prospered with Chris Jones – DT (2nd) and Tyreek Hill - WR (6th). They followed that same sentiment in 2017 with Kareem Hunt – RB (3rd) who is still an extremely talented player despite not being on the team. 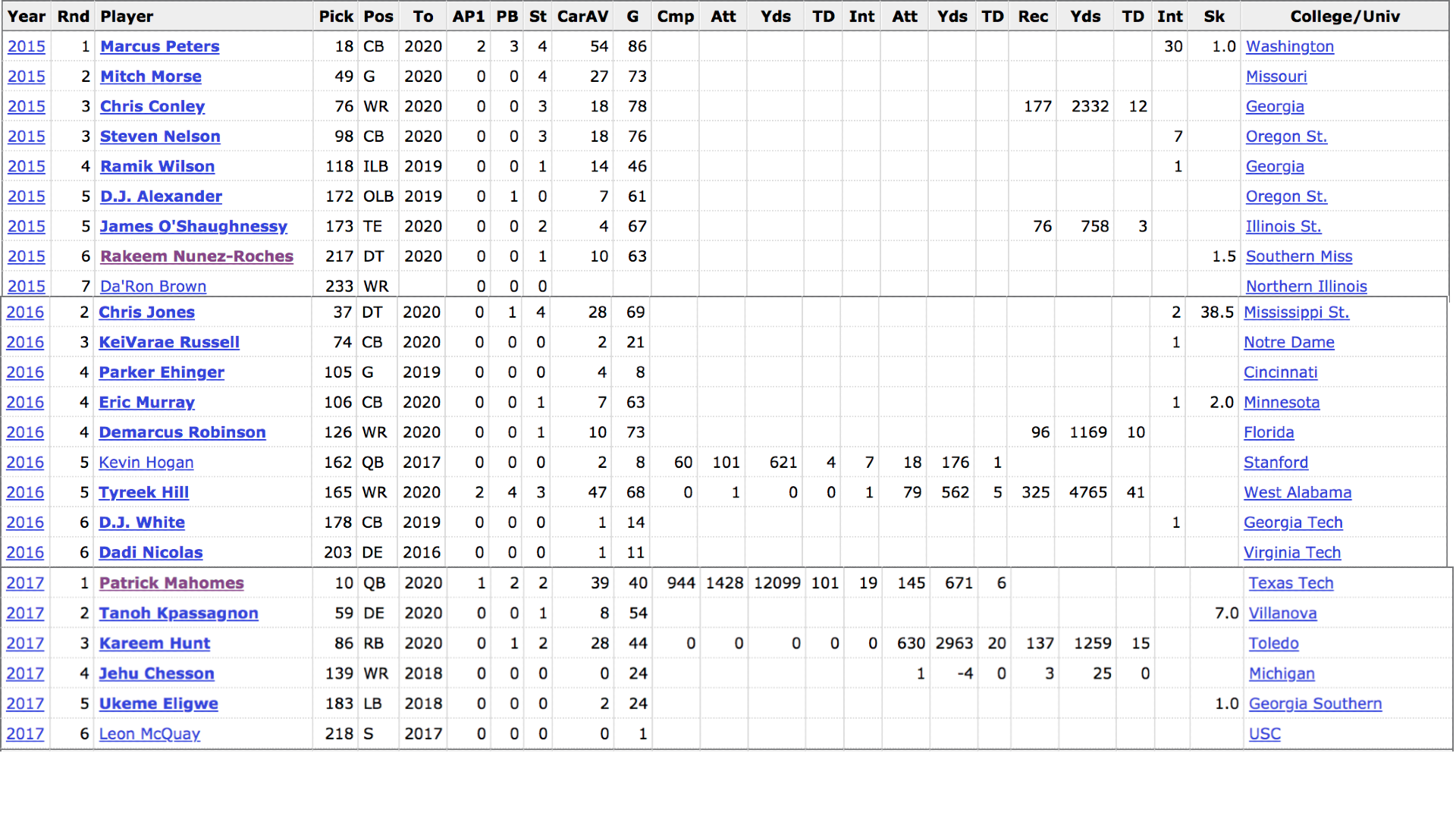 Whew, that was a lot. Borgonzi’s calling card is most definitely his scouting, and as the Texans are in a tricky (yet manageable) cap situation, drafting players who can contribute while on cheaper contracts will be vital.

This is where I think Dodds separates himself from the rest of the pack of GM Candidates. Borgonzi, like many others, specializes in one of the main GM responsibilities – drafting/scouting. However, when doing research on Mike, you’ll be hard pressed to find much about what else he does for the Chiefs.

As I showed in my article on Dodds, not only does he have a great scouting record, but he has had clear influence on free agent decisions and impactful trades. He’s already shown he has the full package necessary for a GM.

For as good as Borgonzi is at drafting, we need to be competent in the other phases as well. I haven’t found quotes on free agents or trades Borgonzi has had a hand in, but I did learn that he scouts the Chiefs weekly opponents.

I think this is a very valuable skill and continues to speak to his ability as a talent evaluator. He and his team are able to analyze opponents and find weaknesses for the Chiefs to expose.

This is a valuable skillset and one that I have often wished the Texans possessed. We never seem to be able to attack an opposing team’s weak points. Games after bye weeks (2019 vs BAL) were always excruciatingly frustrating when we came out slow and looked lost. Weekly team preparation is a necessity in the NFL and this is something that Borgonzi brings, that I have not heard of with Dodds, or other candidates.

While there aren’t direct quotes saying Borgonzi was responsible for free agents or trades, as the director of Player Personnel, you would have to assume he had at least SOME say in these decisions. The following are some of the most impactful free agent signings the Chiefs have made recently, that really contributed to their Super Bowl win.

The consistently competitive rosters Borgonzi has helped build should also speak very highly of his skillset. It's one thing to draft players who look like steals at the time, or sign free agents who you believe can contribute to your team; but it's another thing for that plan to actually lead to success.

My point here isn't to bash on the Texans, but rather show that the thought process behind a transaction is only part of the story. The Chiefs have made decisions that they deem smart at the time, AND they've panned out in the future. We see that with their constantly competitive rosters.

Since Borgonzi was added in 2009, the Chiefs have only had three losing seasons from 2009-2020. In addition, since they hired Andy Reid as Head Coach in 2013, they never had a losing season, won the division 4 times and came 2nd in the AFC west 3 times. The icing on top is obviously the Super Bowl ring in 2020. It’s clear that Borgonzi knows what it takes to build a consistent threat and a contender.

Working with Andy Reid as his head coach, he also knows what qualities are necessary out of a potential Super Bowl winning head coach. The future Texans GM, whether that be Borgonzi or someone else, will have a large input on who the next head coach is.

One name that Borgonzi could bring with him is the much-hyped Eric Bieniemy, Chiefs Offensive Co-Ordinator. What better guy to join Borgonzi on the Texans than Andy Reid’s right hand man?

The two already have a familiarity together and likely align with their team building philosophies. I think a Borgonzi-Bieniemy duo would possibly be the best GM-HC duo the Texans could hire and if you want to hear my case for Eric Bieniemy, watch my video breakdown here: https://youtu.be/54Udsw3bcDM 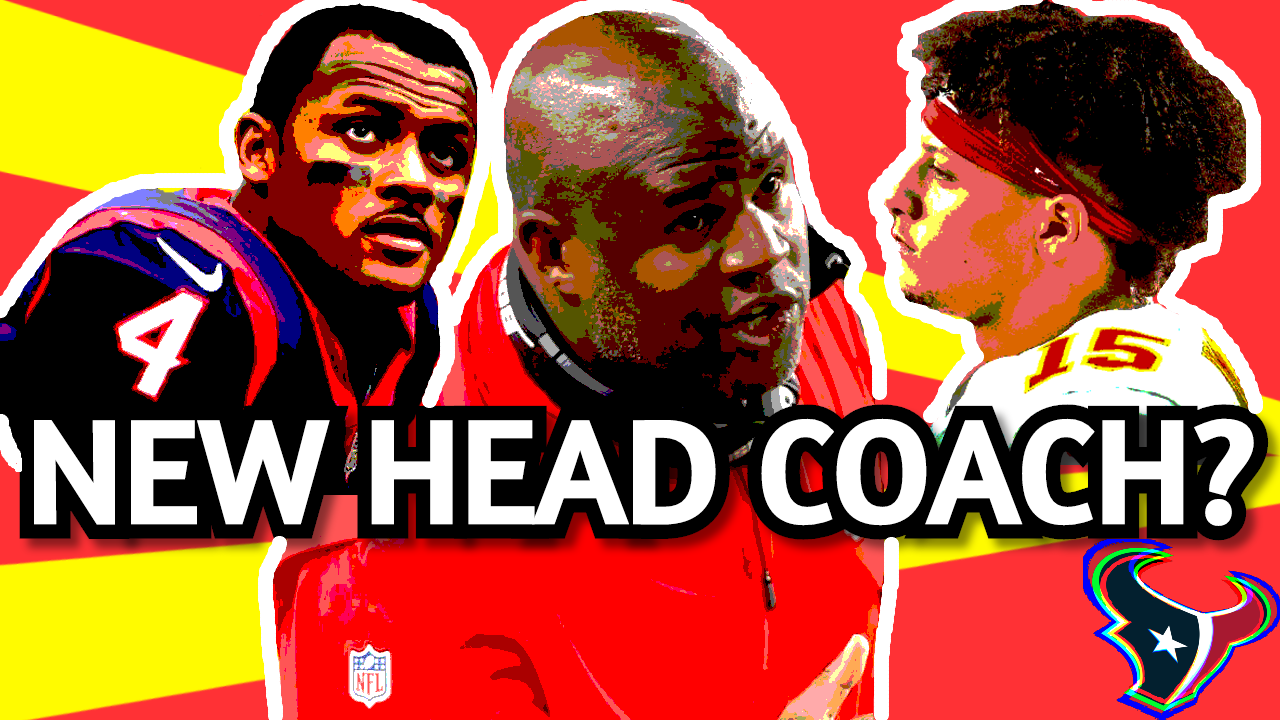 Overall, Borgonzi is a highly experienced talent evaluator who excels in drafting and knows what is necessary to win at the highest levels. The Texans should be interviewing him, Ed Dodds and many other candidates that I will continue to write about. So, if I haven’t already convinced you on Dodds or Borgonzi, come back for more candidates!