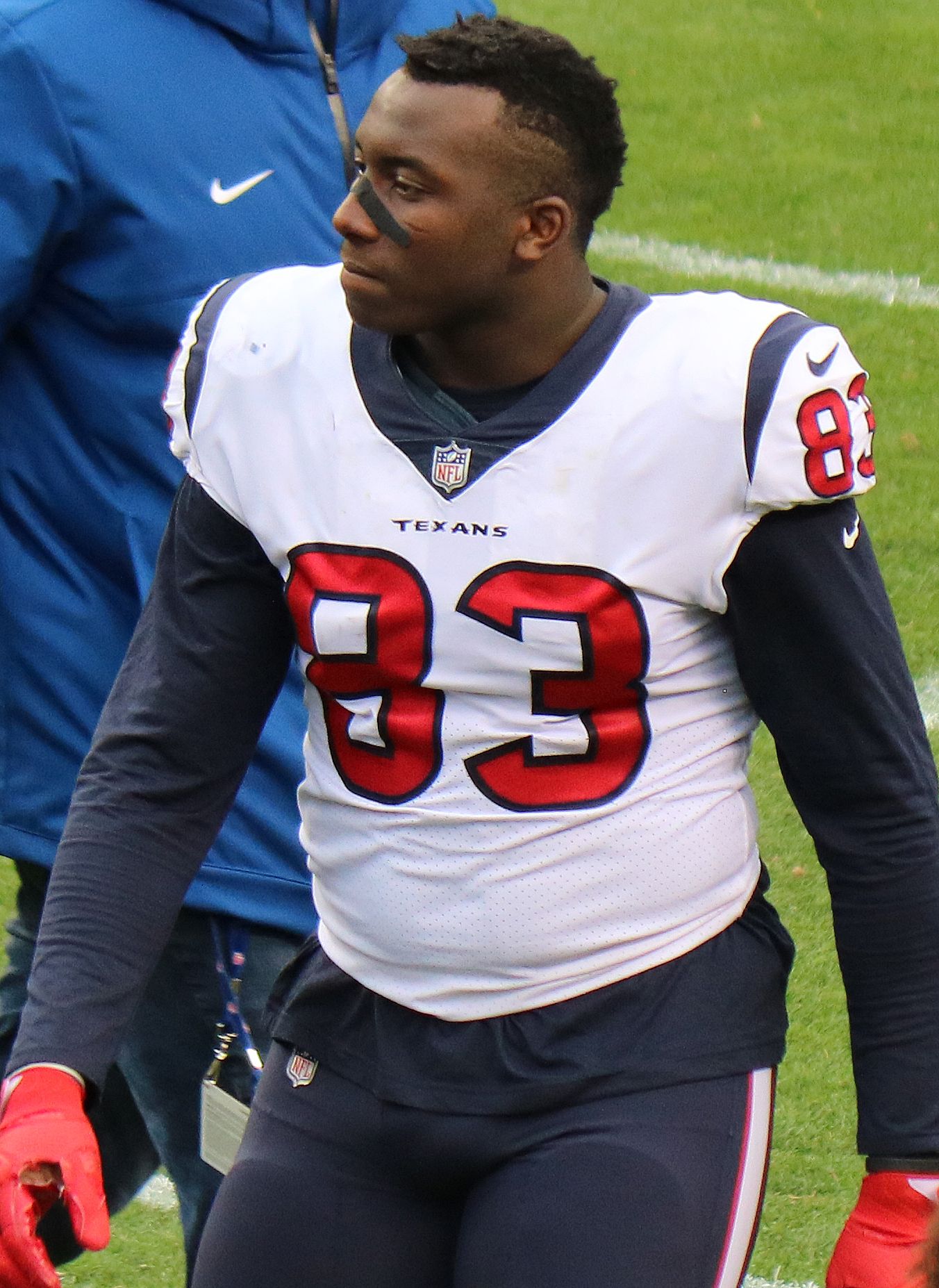 The Houston Texans have fielded competitive rosters across the years and this season is no different as they have to basically make 11 cuts from their 80 man roster to get to the 69 players the NFL will allow on teams due to the COVID-19 pandemic. Teams will have 53 players on their regular roster and practice squads will be expanded to 16 players as four of those spots can be protected and be available to any veteran player.

These rules open up the opportunities for Houston to be creative and keep players that would normally be subjected to look elsewhere to make a roster. The Houston Texans have several interesting moves to make regarding their active roster.

The Houston Texans have a couple of roster decisions to be made on offense. Most importantly, whether Houston will carry a fourth tight end on the roster. Darren Fells and Jordan Akins are entrenched as the top two options after showing to be a solid tandem with Deshaun Watson in 2019. They combined for 759 receiving yards and nine touchdown receptions through the regular season.

This leaves the Texans with a good problem on their hands as they decide whether to keep Kahale Warring over Jordan Thomas if they opt only to bring three tight ends to the final roster.

Warring offers plenty of intrigue after the Texans used their 2019 3rd round selection on him, and he seems poised to be a part of the active roster for the first time since Houston essentially redshirted him in his rookie season by placing on the injured reserve.

On the other hand, Thomas is a talented player and has shown plenty of value after being selected late in the sixth round of the 2018 draft. Thomas came into the scene as a revelation for the Texans offense after accruing four touchdown receptions in his rookie season, the most for any tight end in the Bill O'Brien era (until Darren Fells seven TD receptions in 2019). However, Thomas was dealt a tough blow with a rib injury that kept him sidelined for the first eight games of the season in 2019.

Thomas' upside and ability to be a mismatch for slower linebackers and smaller defensive backs makes him an intriguing player for the Texans to continue to develop on offense.

Thomas is the right candidate to pressure Houston to bring a fourth tight end on the depth chart after the Texans brought up to five tight ends in Bill O'Brien's first season as the general manager. It's doubtful they'll bring five again, but four could be a realistic number with how talented stacked the position is on this roster.

Waiving Thomas and hoping he reverts to the practice squad is another proposition that could occur if Houston chooses to go that route, but it would be a risky one with 31 other teams looking to get their hands on a raw but freakishly talented player at tight end.

Keeping Thomas wouldn't be a bad move after the Texans only re-signed Fells to a two-year deal that is frontloaded with the late bloomer turning 35 next season. Fells was re-signed to be the bridge at that position while the other younger players get to develop behind the scenes.

It would be unfortunate to let a player of Thomas' upside walk because they have to meet a specific number criteria. Thomas would undoubtedly meet the exception to the rule to keep him in the Texans' long term plans.

Another interesting decision Houston have on their hands is who ends up filling the backend of their depth chart at offensive tackle. Houston has seven tackles competing for two or possibly three spots available behind Laremy Tunsil and Tytus Howard.

However, the three names that have stand out from the group are Roderick Johnson, Brent Qvale, and 2019 4th rounder, Charlie Heck. O'Brien has praised Qvale and Johnson as quality depth players on the offensive line, so it'll be interesting how Houston sorts out their depth ahead of today's deadline. Heck was a prospect the Texans traded up for in the fourth round to draft, but his ability to be a meaningful contributor if called upon is unknown.

Johnson and Qvale present the Texans offensive line with the two veteran players that can keep their heads above water in these difficult times that teams face as they have to teach their rookies the ropes in limited time. It'll be interesting to see who the Texans end up picking to be the backup tackles for this upcoming season.

Last but not least, the Texans decision on their third running back will be one to keep an eye on as they brought in former Seattle Seahawks running back C.J. Prosise for a work out according to Aaron Wilson of the Houston Chronicle.

Buddy Howell was the favorite to earn the third spot over Karan Higdon and Scott Phillips for his experience on special teams, but things could quickly change if they're bringing in other players for workouts at that position.

Howell has the body of work on special teams to make his case, but Houston could look for more out of that position with the current pandemic. The Texans might be looking for another Taiwan Jones type of a player for their third spot on the running back depth chart that can catch the football, run the football in limited snaps, and contribute on special teams.

Prosise is a player to potentially keep an eye on after Carl Smith worked with him in Seattle. Smith was the Seahawks QB coach and Associate Head Coach in the 2011-2018 seasons before arriving in Houston to assume the role as an offensive consultant for O'Brien.

The Houston Texans' defense is almost filled out with the exceptions of a few spots at the end of the depth chart. The Texans defensive line is particularly stacked with J.J. Watt, Charles Omenihu, Ross Blacklock, Brandon Dunn, and Angelo Blackson filling out the first five spots on the defensive line.

Houston has normally taken six defensive linemen to the regular season, so the final spot could come down to veteran Carlos Watkins and the young Texas native, P.J. Hall.

Hall would appear to be the attractive pick as the athletic phenom that turned heads in the combine as he ran a 4.67 in the 40-yard dash, but there is more to football than running fast in a straight line.

The 2018 former second-rounder has to pass the eye test and prove he can take advantage of his second opportunity after he wore out his welcome with the Oakland Raiders. Hall had a limited time to make his impact felt in training camp, but the Texans have to decide whether to take him over a player like Watkins that they have a longer time of working with.

This whole conversation could be for naught if Texans opt for a prototypical nose tackle that can handle double teams to back up Brandon Dunn. Houston had two solid options for the longest with D.J. Reader and Dunn but now they will have to find another one after Reader's free agency departure. Auzoyah Alufohai is the other nose tackle on the roster that could offer that ability, and Dunn spoke highly of him in the conversation we had with him on Texans Unfiltered.

Texans have two more spots that will be interesting to keep an eye on at inside linebacker and the safety position. Houston has brought four players at each position to start the 2019 season before adding at least one player to each position after Week 1. I have Texans going Benardrick McKinney, Zach Cunningham, Dylan Cole, Peter Kalambayi, and Tyrell Adams at inside linebacker. Cole has struggled with injuries in his time in Houston, and he could take a bigger role on the defense as a player on passing downs, and let Adams play on special teams.

Special teams remains an important task for the Texans and Adams has shown more than enough to make the roster to start the season after moving back and forth from the practice squad since 2018.

The same could be said for the safety group, Houston has accustomed to only take four, but it'll eventually come down to how highly they view Jaylen Watkins. The Texans signed Watkins to a two-year deal worth $3 million in the offseason but only $300,000 is guaranteed for this season.

Watkins would be a solid fifth option on the depth chart as a reserve defensive back and special teamer, but Houston could choose to use that spot for another position on the roster. The case Watkins has in his favor is that the Texans have shown to like defensive backs from the Los Angeles Chargers after hosting Jason Verrett for a free agency visit in 2019 and signing Jahleel Addae last offseason.

Texans secondary coach is D'Anton Lynn, who is the son of Chargers' head coach Anthony Lynn. It isn't far-fetched to say that the apple doesn't fall far from the tree and both coaches have a similar eye for players in the secondary. Coach Lynn could very well present his argument to keep a fifth safety on the roster after they brought in Mike Adams to reinforce the secondary last season due to injuries.

Texans have a lot of decisions to make ahead of the 4:00 p.m. ET deadline, and it will be interesting to see how they handle these tough decisions ahead of them as they build a competitive roster for the 2020 season.