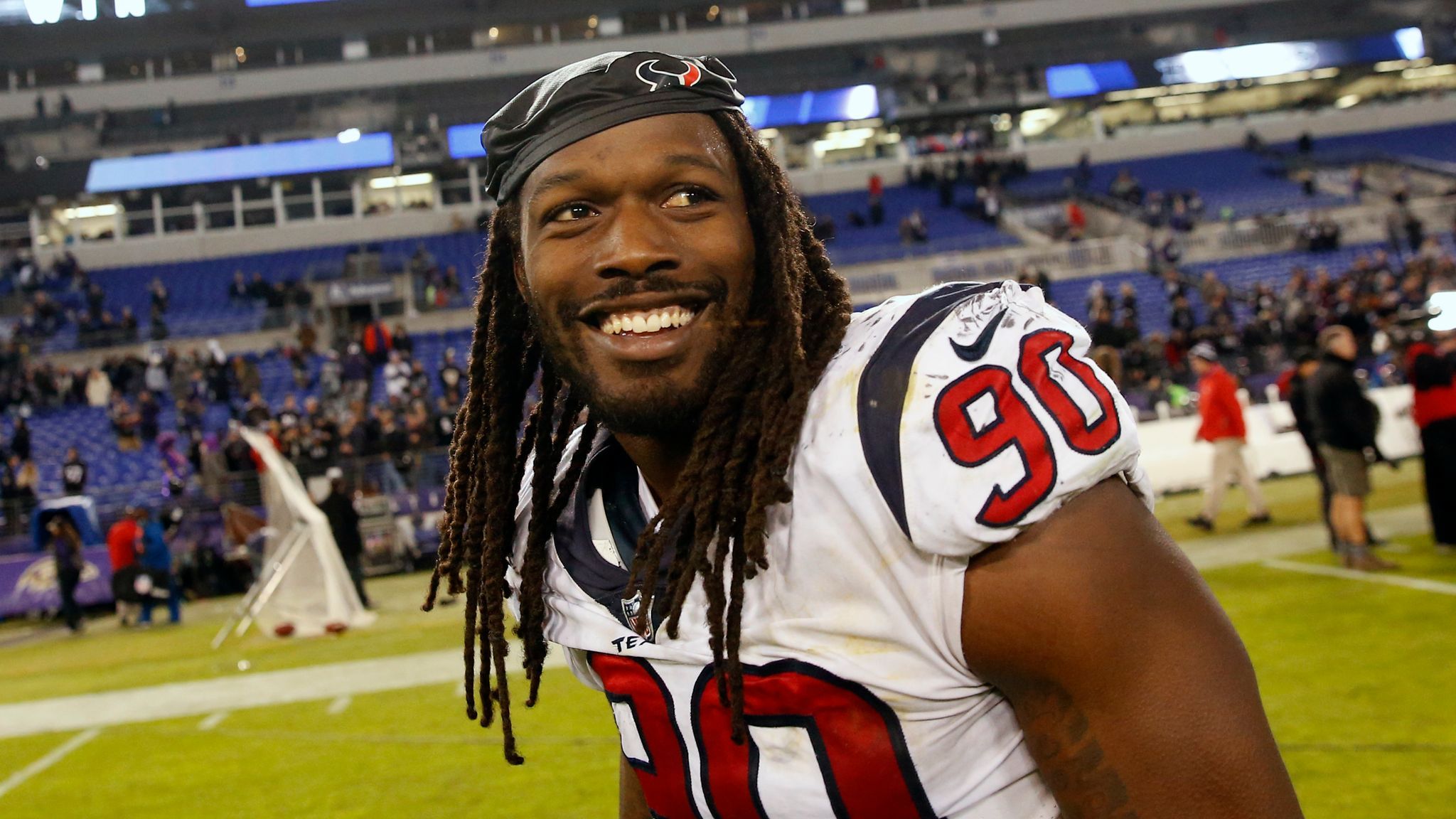 Trenches win football games. Lovie Smith is certainly a believer in this mentality as historically, his NFL defenses have been built around prioritizing the defensive line. The Houston Texans have some promising young guns in Jonathan Greenard and Roy Lopez, maybe even Ross Blacklock, but have key free agents in starters Maliek Collins and Jacob Martin.

With the legal tampering period beginning March 14th and the free agency start date on March 16th, let's preview free agents that the Texans should look to sign, starting with the DL.

Maliek Collins had his best season since his rookie year, wrecking havoc in Lovie Smith's scheme which perfectly fits his aggressive and penetrating style. The thing is, Collins played so well that he might have more attractive offers on the market. While I would prioritize resigning him - e.g. three year deal with 8m/year - let's take a look at some potential replacement options at the most important position in Lovie's scheme.

Summary: Long-limbed interior rusher with pass rush plan, technique and counters. Loves the spin move but plays high and inconsistent vs the run. Overall, a flashy and disruptive 3-tech with active hands and a competitive streak.

Jefferson is my prediction for who the Texans will pursue the most at this position, and possibly sign. Jefferson was with the Texans new DL coach Jacques Cesaire on the Buffalo Bills in 2020 and familiarity goes a long way. We had success signing one Raiders' defensive tackle last year in Collins, could Jefferson be next?

Played as a 3-4 DE in the Bengals defense and projects nicely to 3-tech and possibly 1-tech. He's pretty much the exact opposite type of player as Jefferson and not as smooth of a scheme fit but has more upside and been to a Super Bowl.

Summary: After being improperly played on the EDGE in San Francisco, Thomas found a home at DT with Las Vegas. His hands pack a serious punch, he plays with a non-stop motor and was a disciplined rotational rusher who is worth another shot to tune up his DT skills.

Playing next to Maliek Collins in the trenches was one of the best surprises from this past Houston Texans season - Roy Lopez. The sixth round rookie started 15 games and did the dirty work, regularly clogging up the A gap and being the best run defender on the team. Thus, this isn't a large position of need but with how Lovie prioritizes rotating the d-line, more depth is greatly welcomed.

Summary: Jones is a powerful presence in the middle of the DL and has the quickness to defend all types of run schemes. He's been integral as the "head of the snake" for the 49ers 2nd ranked run defense by DVOA.

Due to that fact, he's likely going to obtain a plethora of offers from other teams. The 49ers may let him get away to pay other internal free agents and allow for 2020 first round pick, Javon Kinlaw, step into Jones' starting role.

Summary: Settle has played every interior DL position imaginable in Washington's multiple front as his play strength and lateral quickness fuels versatility. In the Texans 4-3 he fits best as a 1-tech who would provide valuable depth as a run defender and help keep Roy Lopez fresh.

While he's only started two games in his career, Settle's best football is still ahead of him. He's got an opportunity to show more of his talents by leaving Washington's talented and deep DL - he's one of the better upside bets this year. It'll be interesting to see if he can recapture his pocket collapsing skills which led to five sacks in 2020, but dropped off to zero sacks in 2021 with a drop in snaps by 13% too.

Summary: Jones has been an underrated player for a few years now and is a handful for offenses to block. He's a space eater vs the run who will punish solo blocks and demand doubles. The Panthers run defense was 15th in DVOA but that's largely due to the light personnel on their edges.

Jones deserves a medium-high end contract and very well might get one from teams more ready to win. Nonetheless, Caserio should reach out as Jones is a badly needed talent for the Texans league-worst run defense.

If 3-tech is the most important position in Lovie's scheme, a dominant edge rusher comes in a close second place. With Jacob Martin hitting the open market it would be wise to prepare for his departure, as sad as that may be. Prioritizing athletic ability and pass rush production is what I'm going for here.

Summary: Key escaped the death grasp of the Raiders and had a career year with the 49ers. They know how to coach up d-line talent and Key has flourished getting after the QB on stunts and when slid inside.

Think of his skillset like Charles Omenihu - best rushing the QB from the inside and not a great run defender but could survive setting the edge with more development - but in a more fluid body.

Summary: Turay is a borderline bust in the eye of many Colts fans and it's unfortunate because he hasn't stayed healthy to really prove that narrative true or not. Through four seasons, he's played in 38 out of 65 total games and has dealt with countless minor nagging injuries. There is plenty of risk involved with signing Turay, but that should be reflected in his price tag.

A one-year, prove you can stay healthy deal would be a wise bet for Caserio to take on a player who is very similar to Jacob Martin. Turay is a blur off the edge, winning with speed and competitive toughness to the tune of 12 sacks and 76 pressures while playing just 30% of the snaps over four seasons - he's an efficiency monster when healthy.

Turay has a connection to one of the few holdovers from David Culley's staff - Frank Ross, special teams coordinator. He was the assistant ST coach in Indy from 2018 to 2020 and could have valuable insights into a player who many might cross off their target list.

Summary: A bendy defender with solid get-off and long arms who's made plays on the edge and interior. Still fairly inconsistent but the youngest player in this article with plenty of potential still untapped.

Armstrong's athleticism is intriguing and he'd bring some versatility to the d-line, allowing Lovie to get a bit more creative than he was able to with the horses he had last year.

Summary: Hughes would provide a respected veteran presence and mentor whose stats have declined in the past three years but still has plenty of juice, especially to succeed in a designated pass rusher rotational role.

Additionally, playing for Leslie Frazier's defense - another Tony Dungy disciple like Lovie Smith - he'll instantly understand the defensive nomenclature and schematics. Plus, Hughes was coached by new Texans DL coach, Jacques Cesaire, in 2020 and 2021 - he'll definitely want to bring one of his main guys with him.

Opposite of Jacob Martin was arguably the Texans best defender - Jonathan Greenard. The sophomore had quite the surge in 2021 and finished with a team high eight sacks despite playing in just 12 games. Like Lopez, Greenard should continue to start and develop, but depth should be welcomed with open arms.

Summary: Green would bring some versatility to what is historically a fairly vanilla defense that Lovie runs. The Seahawks dropped him in coverage, rushed him from the edge and interior, lining up everywhere from 7 to 1 technique. He would benefit from playing 7-tech and 3-tech depending on the matchup.

Green times his pass rush moves well and has bull in a china shop energy as he will just run through contact to find the ball. He's not the fastest or most fluid athlete and will have cold spells throughout the game.

Summary: Fresh off his best season in x years, Clowney proved that when healthy, he's still a disruptive force who racks up pressures and creates negative plays vs the run. Could a Houston reunion finally be in store? Clowney's rumored bad blood with former head coach Bill O'Brien is now two regimes ago and he's everything Lovie Smith looks for in a defensive end.

Clowney's at his best as a very good number two pass rusher, playing opposite of Myles Garrett led to less double teams in 2021. However, it's very possible that Houston drafts that alpha pass rusher at third overall, with Kayvon Thibodeaux or Aidan Hutchinson potentially being on the board. With Greenard also in the mix, could Houston put together a fearsome three-man rotation on the edge? I can only dream.

Summary: Kerrigan was a respected veteran I was interested in signing last year and even though he didn't play much in Philly this year, I think his leadership and culture traits would go a long way. He might have a little bit left in the tank as a rotational role and certainly would help Greenard learn how to succeed best as an EDGE whose strengths are more technical than athletic.