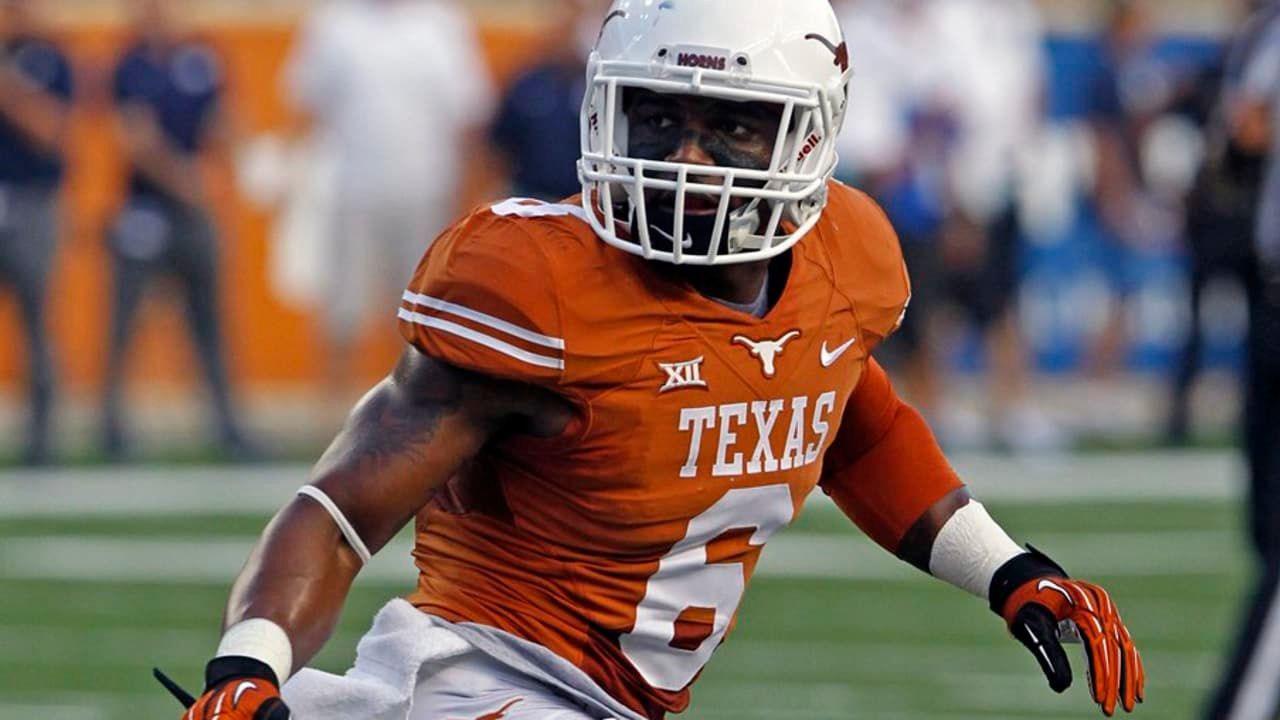 With the next stage in the offseason nearing, free agency provides a time for Nick Caserio to add new personnel to the Houston Texans. With 2021 defensive coordinator, Lovie Smith, being promoted to head coach and not hiring a replacement for his old position, the defensive scheme will remain intact. I previously previewed defensive line free agents which you can find here.

Next, let's look at some potential new faces at corner and safety who would fit the Texans scheme, budget and timeline. For cornerbacks, Lovie - and other Tampa 2 disciples - have historically prioritized size and physicality, dependable tackling and zone awareness. For safeties, range from the hash marks to the sideline is key and reliable tackling is welcomed.

The Texans have Desmond King entering free agency and after an up and down season, his future with the team is bleak. A nickel corner for his entire career, he moved outside due to the emergence of Tavierre Thomas and a need on the boundary. King struggled at first but ended the season strong; however, he may not want to continue playing out of position.

The other starter candidates are Terrance Mitchell who was an upgrade over Vernon Hargreaves and Phillip Gaines in 2020 but still painfully mediocre overall. Lonnie Johnson is remaining at corner and seemingly finally not being screwed over by the coaching staff. While his skillset fits this scheme well and he played decent at the end of the season, he's not proven enough for the Texans to disregard this position. Thus, let's look at some of the available options I believe they should pursue.

Summary: A physical and aggressive corner with plenty of height and length to combat receivers looking to play bully ball. Ward wears his opponent down both mentally and physically while often being matched up against the top offensive option.

He excels in press-man situations but the Chiefs also play plenty of Cover 2, thus he's a natural fit for Lovie Smith's scheme. He's one of the few CB1 options that isn't a "star" name and may command a big cheque.

Summary: An elite athlete, Jackson is lightning fast with his 4.32 40 yard dash time and has the change of direction skills to pounce on throws. He's pretty scheme dependent, excelling in zone and struggling in man, but that plays perfectly to what Lovie wants to do.

Jackson is a solid CB2 who brings volatile value as his aggressive nature leads to ball production but also occasional big catches allowed. At his age, his best ball is still ahead of him and a multi-year deal at the right price makes sense.

Summary: Douglas thrived in Green Bay, making numerous impactful interceptions late in the season. He's always been a "splash play" corner who adds value by making plays on the ball. The Texans seemingly realized his potential, but cut ties too early and went with veterans Desmond King and Terrance Mitchell, over (unproven) youth.

They have a chance to right their wrongs by pursuing Douglas who proved his prowess in zone coverage. Under Packers DC Joe Woods, Douglas played a lot of 2-high coverages and has already learned Lovie's system which makes for a smooth transition if he returns to Houston.

Summary: A personal draft crush of mine back in 2018, Wallace went undrafted after contributing to an elite Alabama defense as a former walk-on. He's always been more of a press-man corner in my eyes but played in Leslie Frazier's zone heavy defense in Buffalo. That is a benefit for the Texans, as Frazier and Lovie's schemes come from the same tree.

Wallace is now well-versed in being a Cover 2 corner and was part of an elite Bills defense that ranked 1st in total and pass defense DVOA in 2021. The Texans new DL coach, Jacques Cesaire, has experience around Wallace from his time in Buffalo and hopefully could recruit the well-rounded free agent.

Summary: A seemingly forgotten talent due to being ravaged by the injury bug - missed 25 games in his five year career - Witherspoon has played quite well when healthy. He's a long-limbed defender with quick feet, especially at his size and is another zone coverage corner who is better against the opponent's second option, rather than the first.

Giving Witherspoon a prove-it deal and hoping he can stay healthy would be a very solid backup plan for the Texans. He'd instantly be the biggest corner on the team and has improved as a tackler throughout his career.

Tavierre Thomas was one of the best signings in this past offseason and he made the most of his starting opportunity. He's solidified the position for the time being - he'll be a free agent next offseason - but for the purpose of this exercise, let's look at a few options who would be versatile depth or too talented to pass up if interested in joining.

Summary: Stewart's versatility to play nickel and safety - as the third safety or strong safety - is quite valuable and would help Lovie utilize more diverse personnel and become less predictable. Stewart is a dog on the field, bringing a physical tackling presence which the Texans secondary could certainly use.

You can never have enough defensive backs and Stewart would be a valuable, young depth piece who could compete at strong safety and provide little drop-off in play if Tavierre Thomas gets injured.

Summary: An instinctual playmaker, what Reed lacks in size he makes up for with athleticism and a knack for being in the right place at the right time. While nickel corner isn't a need, Reed is one of those players that if he would actually want to come to the Texans, he's too talented to pass up on.

His film and production is deserving of multiple suitors in free agency but nickel is one of those odd positions that can have their market die unexpectedly. If so, Caserio should pounce and try and sell Reed and Quandre Diggs on leaving the Seahawks and joining the Texans together.

With Justin Reid's rumored departure, the free safety position will be a needed point of emphasis. Just to be clear, I would love to resign Reid at the right price - this team cannot afford to lose more young, homegrown talent - but that idea has seemed unlikely for a long time.

Therefore, finding a young replacement or veteran stopgap/leader would be wise. The free safety position in Lovie's defense is not as demanding as in single-high, Cover Three heavy defenses, but still requires a rangy, zone-aware defender who limits big plays and creates turnovers.

Summary: Arguably the most popular free agent among Texans fans, Diggs would be a nice homecoming story and most importantly provide an uber-talented player on the field. The Angleton native and UT star has always been an underrated player and his production the past two years with 10 combined INTs will make Lovie's eyes pop.

He regularly played single high for the Seahawks but they also transitioned to more two-high looks, making him a great fit for our system. As a ball-hawking free safety, Diggs rarely gives up catches, erases mistakes from teammates and secures tackles when necessary. He'd be the best safety the Texans have had since Tyrann Mathieu and one of the best in franchise history.

Summary: It's extremely impressive that McCourty has been as durable and productive at his age. The 34 year old hasn't missed a game since 2015 and only missed five games over his 12 year career, while being a dependable leader for the Patriots versatile defense.

He's one of the best free agents available and if Nick can use his Patriot connection to haul in a big fish like McCourty, there wouldn't be the same uproar as when he added Marcus Cannon, Rex Burkhead and others. Caserio needs to nail personnel decisions going forward and McCourty would be the first starter caliber player the Texans could benefit from gaining via the New England pipeline.

Summary: Walker was seen as a hidden gem coming out of the draft and plauded as a steal for the Lions. He's done his job well even if the stats don't look too friendly towards him. Walker is surrounded by an embarrassing lack of talent which puts stress on him to be perfect and often he's found in lose-lose situations.

In a better scenario, Walker could recapture his ball-hawking and instinctual play. Ideally, that scenario is Houston and there are multiple additions in the secondary to make everyone's lives easier.

The safety next to Justin Reid has been a revolving door and while Eric Murray fared better here than at nickel in 2020, he's still not a starter-caliber player. Strong safety in Lovie's scheme is one of the least valuable positions so filling this need in the draft on day two or three may be more wise than spending in free agency.

Summary: A valuable contributor on a Super Bowl defense, Whitehead is often the forgotten man in the Bucs secondary but make no mistake, he's a good starter and enforcer. Playing next to Antoine Winfield means Whitehead is more responsible for run defense duties and occasionally guarding tight ends.

He's a feisty safety who flies towards the ball with immense competitiveness. That can occasionally backfire on Whitehead as he misses tackles at a decent rate but his ability to create negative plays makes him a net positive.

Summary: Harrison is another member of the elite 2017 Alabama defense, along with Levi Wallace. The talent has always been there as he's often shot out of a cannon, flying around the field and packing a serious punch when he tackles. Harrison is a tone-setter and intimidator that every defense needs.

That being said, he's coming off a down season in 2021 and in need of a bounce back. He's at his best attacking the run from the box and is quite limited in coverage but if Lovie does want to diversify his defense and play more Cover 3 - as he did at the second half of the season - Harrison would fit nicely.

Summary: A First Team All-Pro special teamer in 2020, Odum has always been a Colts' fan favorite. The Texans have prioritized special teams under Caserio and adding another high-caliber player to this unit would be welcomed. This team needs to get better at making smart moves around the margins and Odum would be a low cost option who is an ace special teamer and decent depth safety.