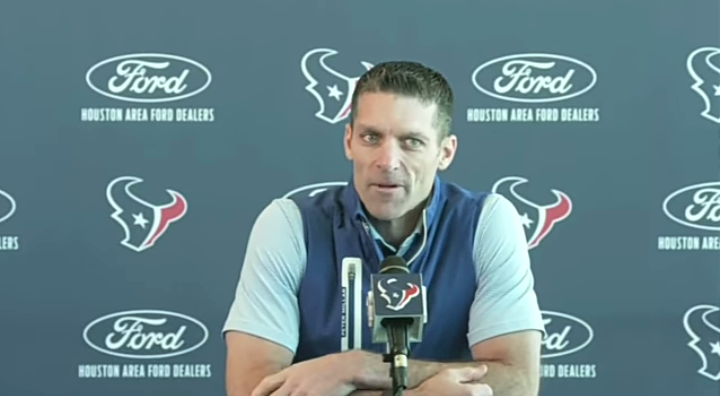 Looking back at the 2021 Draft Class

#1 Pro-Style QB in the nation coming out of HS in 2017, ran a pro-style offense in Stanford, Texans QB Coach Pep Hamilton (former Stanford coach) had a good overall picture of where he was a QB prospect from David Shaw.

Despite opting out in 2020, there was a huge appeal coming from a college program with a great NFL coaching infrastructure in place with Jim Harbaugh, Pep Hamilton, and Ben McDaniels at Michigan. The latter two now form part of the Texans' staff.

Ranked as the #1 TE in the nation coming out of HS in 2018, went to Tight End University in Miami.

Was team captain of the TCU defense, 4-year contributor, athletic LB, and safety. TCU has a good track record of sending talented defensive contributors to the NFL.

5-year college player (granted an extra year of eligibility because of injury), wrestling background, grew up around football with his father as a football coach.

Without a 1st or 2nd round pick, the Texans ended up drafting players with solid football backgrounds. And it wasn't a bad blueprint, Mills, Jordan, Collins, and Lopez all had their moments as rookies. Meanwhile, Wallow also saw more playing time towards the end of the season and contributed on special teams.

WR in the 1st round

If the Houston Texans go WR in the teens (13 or factoring a trade back), it's hard not to see Garrett Wilson and Chris Olave at the top of the Texans board. Both players are coached by former NFL WR Brian Hartline.

Hartline was a respectable NFL vet and that has transferred over to his coaching career in the college ranks. As a result of solid recruiting and joining a prestigious college program, Ohio State is stacked at the wide receiver position for the foreseeable future.

Part of that resulted in former Buckeyes receiver Jameson Williams transferring to Alabama where he was graded as a 1st round lock before an unfortunate ACL injury in the CFB playoffs has created some uncertainty about where he might get drafted.

With that said, it's hard not to look at the former Ohio State receivers being in high demand for the Texans and other NFL teams. All 3 receivers have a chance to go in the 1st and have strong coaching backgrounds to make an impact from Day 1.

Drake London is another receiver that could be a fit for the Texans. At 6'4, he plays at that size and could be an imposing target at Davis Mills' disposal.

It's not the worst thing in the world to have receivers that give your QB a better opportunity to be successful in the red zone. If he has a solid Pro Day, London could be gone before the Texans pick at 13 but he's a talented possession receiver that warrants consideration if he's there or if Houston end up trading back.

This draft is deep overall with NDSU receiver Christian Watson also drawing a lot of attention after his impressive numbers at the combine. He's a player that could be drafted at the second half of the 1st round or at the top of the 2nd when the Texans are well-positioned to take a receiver. Arkansas WR Traylon Burks is another receiver if Houston trades back into the late 1st round.

Houston has Cooks and Collins as the only receivers under contract beyond 2022.

What can the Texans do at 3

I'm a very strong advocate of the Texans trading back at least once in the 1st round. This year's draft isn't top-heavy in blue-chip recruits like Chase Young or the Bosa brothers but they are very deep in the teens and in the Top 100 prospects.

With that said, there are quite frankly a lot of directions the Texans can go if they stay at 3, going DL or OL are the most popular ones.

The trenches are definitely an area the Texans could improve heading into the 2022 season but the biggest issue is there is not one player that stands out from the rest at 3. If Aidan Hutchinson goes 1st overall, Kyle Thibodeaux and Ikem Ekwonu are the more popular names at 3.

This is probably one of the unlikely scenarios but it's a thought exercise worth exploring.

At the surface level, one might scoff when looking at the Texans being interested in Ekwonu after restructuring Laremy Tunsil's deal for the 2022 season and Tytus Howard having an impressive outing at tackle last season.

Tunsil and Howard are potentially the starting tackles for the 2022 season but are they starting tackles for the foreseeable future? If Texans pick up Howard's fifth-year option for the 2023 season, Tunsil and Howard will both have 1 more year under contract before hitting free agency in 2024. In a perfect world they're both here for their prime years, but how much money do the Texans want to tie into their offensive tackles down the line?

Drafting Ekwonu is an intriguing fit for that very reason. Viewed as a talented guard and tackle prospect, Ekwonu could fit in at guard with Tunsil and Howard sorting it out at tackle for the next two years.

If history has shown us anything, Tunsil and Howard have dealt with injuries that have kept them out of games. Ekwonu will get his time to get some play some tackle.

There is no problem with going OL at 3. Ekwonu is an amazing long-term insurance policy at tackle while being a Day 1 contributor at guard for the Texans. In the short term, having 3 above-average starters on the offensive line is nothing to frown about for fans.

Might be a little rich but Texans could also go guard at 13 or trade back for Kenyon Green or Zion Johnson. Both are talented guard prospects but they don't have the upside of playing tackle down the road if needed.

Travon Walker and Kayvon Thibodeaux are the more popular DL prospects at 3. Walker's stock seems to be on the rise after his combine performance. He's a phenomenal athlete that can play multiple positions across the defensive line. He's strong, athletic, and has very long arms for an edge rusher. His production hasn't matched up with his athletic gifts but any team could be talking themselves that they are the right staff that can unlock his potential.

Thibodeaux's name has also been on the forefront for the longest. He was viewed as one of the top prospects before the start of the college season and he hasn't done much to derail his chances of being a Top 5-10 pick. People might be overthinking at this point with Thibodeaux, he might not be everyone's cup of tea when it comes to his personality, and that's what it may come down to.

Stingley, Gardner, and Booth are viewed as the top CB prospects, 3 might be a little rich for a cornerback but it's definitely a need for this team if they fear their prospect won't be there at 13.

Houston has very little set in stone beyond 2022. Tavierre Thomas, Tremon Smith, Jimmy Moreland, Lonnie Johnson, and Isaac Yiadom are slated to be free agents after this season.

The only cornerbacks under contract in 2023 will be Reggie Robinson, who the Texans claimed off waivers from the Cowboys as their former 2020 4th rounder, and Desmond King.

Cornerback isn't the most important need in a Lovie Smith defense that predicates on a dominant front seven but it's a very pressing need in the long term.

Kyle Hamilton is one of the most talented safeties to come out in the last 5 years. To put it into better perspective, Eric Berry, Jamal Adams, and Mark Barron are the only safeties to be drafted in the top 10 in recent history. Berry is the only safety prospect to be drafted in the top 5 and It's a little difficult to justify drafting a safety at 3 in a deep safety draft.

Especially when safeties aren't exactly the engine of the defense (defensive line) or the brain trust (linebackers) of Lovie Smith's defense.

It doesn't mean Kyle Hamilton isn't a good prospect for the Texans, but it's difficult to see Hamilton being the top priority at 3 when other positions of value (OL, DL, and CB) are there for the Texans.

I'm personally very high on Hamilton if the Texans trade back from 3 or he is available at 13. A very talented player with a strong personal background, the word "culture" is overused a lot in sports and in the working environment, but it's very important to set the tone on what expectations are.

Texans could use more talented players with high football IQ, make good life decisions (stay out of trouble), and have the maturity to take coaching.

Once the bar is set for how a franchise wants to be run, players know what they are in for. Teams like the Steelers, Ravens, and Patriots have created an identity that most players know what to expect once they're drafted there. Those organizations can even afford to take risks on players with checkered backgrounds because they have a strong infrastructure in place.

The Texans are still the youngest franchise in the NFL and have had some success but they are still ways away from being an established and well-respected franchise.

As ugly as the 2021 season was, there were some encouraging signs by winning 4 games with a very underwhelming roster and a 1st time HC in David Culley. Replacing Culley with Lovie Smith (3rd time NFL HC) and getting a golden parachute from the Deshaun Watson trade has put Houston in a very good place to cover some ground if they hit on their draft picks.

The Texans were able to walk away with some premium picks. It's very unlikely Houston makes the playoffs this year but it's an interesting conversation in 2023 depending on how the team responds under Lovie in 2022.

As ugly as the Watson divorce got, getting the draft picks the Texans got for him was always going to be the "hope" from Pandora's Box.

This is Year 2 in the rebuild but with a clearer and more structured view on the horizon. The 2022 season could be viewed as a cursed season for Texans fans from a win/loss record perspective, but there is hope that the Watson trade has created. And there are players in this draft that can accelerate the rebuilding process.

Ironically, the comparable teams the Texans should look to emulate from a rebuild perspective are the Cleveland Browns and the Miami Dolphins.

The Browns under Sashi Brown committed to tanking for promising prospects coming out of college (Myles Garrett and Baker Mayfield) and traded back from the top of the draft to get premium picks to rebuild their roster (Nick Chubb, Denzel Ward both picks from the Texans).

Besides the record-setting contract, the Browns cultivating a talented homegrown roster didn't hurt in playing a factor in attracting Deshaun to Cleveland.

Dolphins traded 49ers 2021 1st and their future 2022 1st to the Eagles to move back into the Top 10 to draft Jaylen Waddle. Miami also had the flexibility to trade SF 2022 1st for Tyreek Hill this offseason due to their surplus of 1st rounders. Still having 2 1st in 2023.

It's fair to point out both teams missed the playoffs last year, but they still have a promising plan in place due to properly investing their 1st round picks they acquired in previous Texans trades.

The Texans have only missed the playoffs for 2 years counting but they have a lot to look forward to with 6 1st round picks in the next draft. Houston will have plenty of ammunition to turn things around. and potentially get more picks than what they already have.