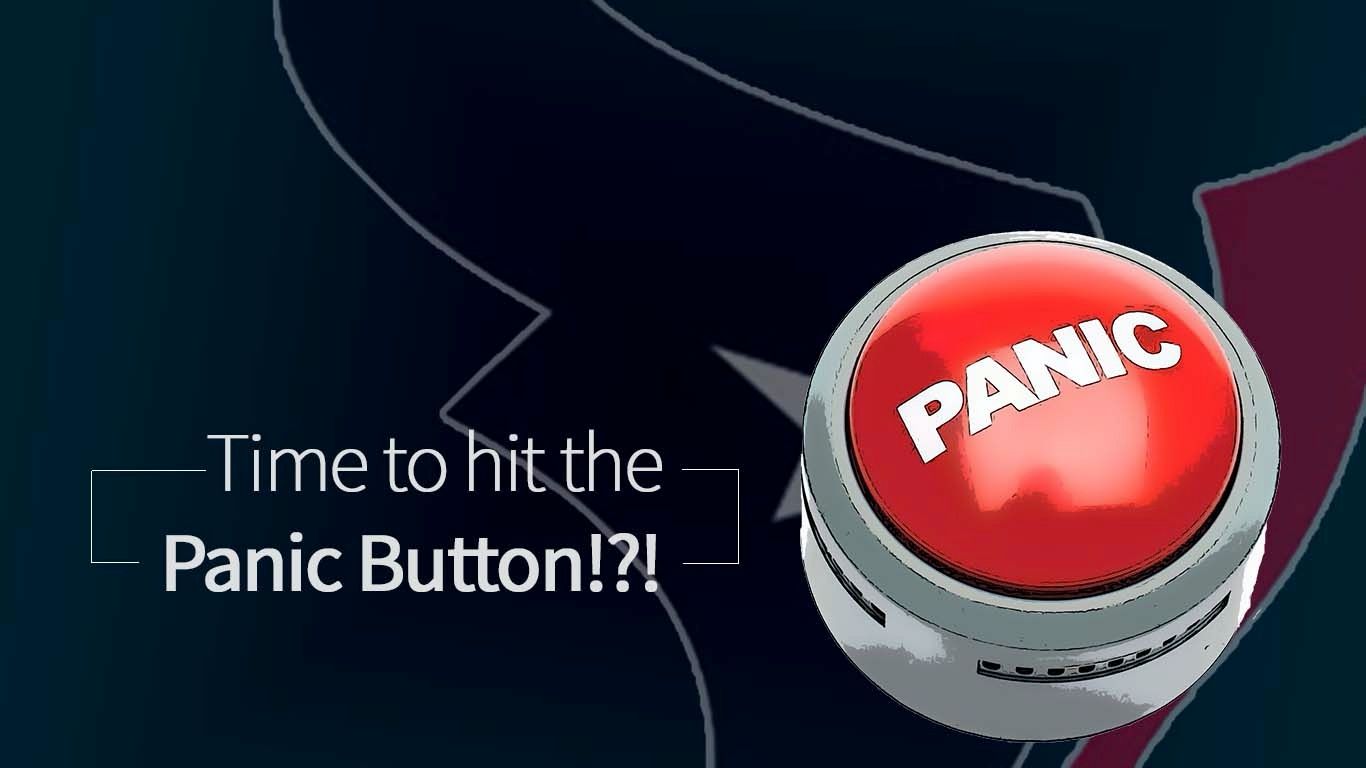 Is it time to hit the big red panic button for the Houston Texans after an 0-3 start?

Why are the Houston Texans 0-3 again? New coaching roles?

This is not the first time the Houston Texans have started a season 0-3 under Bill O’Brien’s watch as head coach, so what is different? It is difficult to find any legitimate excuses for the team's slow start.

However, this is a unique year for all NFL teams with the COVID-19 complications that have led to a limited number of interactions for the new group of wide receivers to acclimate to the Texans offense and work with their new quarterback, Deshaun Watson.

That has led to a rough start on offense, but another notable change in the offseason includes the promotion of three coordinators for the Texans.

The last time the Houston Texans went 0-3 was in 2018 with Romeo Crennel returning to the defensive coordinator role after Mike Vrabel took the head coaching job in Tennessee and Brad Seely becoming the new special teams' coordinator after the team mutually parted ways with Larry Izzo.

Coordinators present different philosophies, and this year is not any different with Tracy Smith, Anthony Weaver, and Tim Kelly assuming new positions for the Texans.

We will start with the special teams because it should be the least of our worries after a solid start. First-year coordinator Tracy Smith was promoted into the lead role with Seely surprisingly retiring after 31 years of coaching and being the Texans special teams coordinator for the last two seasons.

Tracy Smith was a strong candidate for the special teams' job after being Seely's understudy for 10 years. Tracy is the son of Carl Smith, who joined the Texans last season and has a tremendous rapport with the players. The Texans have been successful in this phase after locking up most of their core special teams players, and most importantly, Ka’imi Fairbairn.

Fairbairn did miss a crucial field goal attempt in Week 1 that affected the Texans' chances to keep the game close before halftime, but he has been perfect in the last two weeks against the Baltimore Ravens and Pittsburgh Steelers. Ka’imi has often started a little shaky but settles down as the season progresses.

The biggest concern on special teams has been the return game with DeAndre Carter. He has done a decent job at returning kicks, but he has yet to break away for a touchdown since joining the team midway through the 2018 season.

A lot goes into fielding kicks since blockers have to do their jobs, but Carter hasn't shown much to secure his role should another returner become available.

Let's move on to the bigger issues now.

The Houston Texans defense left a lot to be desired in the season opener against the defending Super Bowl Champions, the Kansas City Chiefs.

Chiefs rookie RB Clyde Edwards-Helaire gashed the Texans defense for a staggering 138 yards and a rushing touchdown in his NFL debut. Week 2 was a slightly different story as Anthony Weaver dialed it back with the ‘exotic” play calls, and let his guys get after the quarterback.

The front seven looked way different, getting pressure on the ever-elusive Lamar Jackson, racking up 3 sacks, and holding Baltimore’s offense after a bloodbath in their previous encounter.

Houston’s run defense still needs work, and Baltimore’s late efforts to run the football proved that. One play that comes to mind is the direct snap to Mark Ingram that he ripped off a 30 yard run on a direct snap in which the Ravens went jumbo on the left side of the line, and had Lamar Jackson split out wide.

Now, looking back at the pre-snap, there was an obvious mismatch for the Texans, and a timeout should have been called to adjust to get the right personnel on the field.

However, there was nothing, and it’s very concerning that this went unchecked by the coaching staff to try and stop it. However, there will be growing pains as the new coordinators get comfortable in their new roles.

Now let’s get to what I feel is the root cause of everyone's frustrations.

The Houston Texans offense has been anemic, and not much has changed from the vanilla offense under Bill O’Brien. First-year signal caller Tim Kelly came highly recommended by his peers and players alike.

I was very intrigued to see this new offense we heard so much about in the offseason. As Jordan Pun has shown in his film reviews, the play calling is very generic and almost repetitive to the extent that the defense can quickly catch.

So what gives besides bad playcalling? Is it Deshaun Watson? No. Is it the wideouts? No. Its not the running backs, and it’s not the tight ends, which leaves the offensive line.

But wait! I thought they recently invested draft picks and millions of dollars to help Deshaun Watson stay upright? They certainly did, but it is not working out very well.

It is certainly not for lack of talent, because we have seen them play very well against formidable defenses, so what's the common denominator for years of lackluster performances from the offensive line? Mike Devlin. It might be time to move on from Devlin and bring in a fresh mind to coach the group upfront.

While we did see improvement in some areas against the Steelers, some of the same struggles in previous ultimately led to their third defeat of the season.

So, is it time to panic? Not yet, but I’m certainly teetering on the fence. If things do not change fast, Cal McNair should begin thinking of the team's future without Bill O’Brien.

It’s been a bumpy road, and a lot of the issues have been self-inflicted, but the Houston Texans have a real opportunity to earn their first win against the winless Minnesota Vikings.

Both teams are 0-3 and are looking to get back on course with 13 games remaining on the NFL schedule. Whichever team loses faces a tough road ahead, so it’s imperative for Houston to avoid getting into a deeper hole than they are right now to qualify for the playoffs.