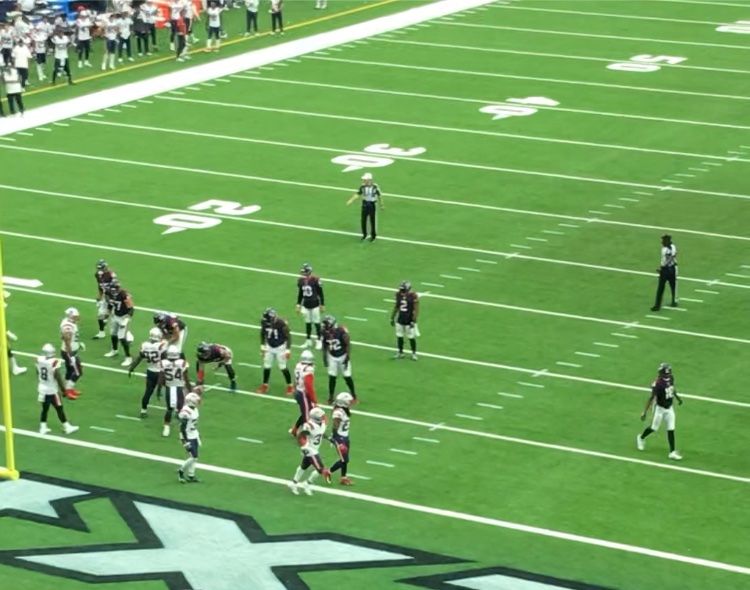 The Houston Texans have a delicate matter to manage between the present and the future.

Tyrod Taylor is the present. Is Davis Mills the future?

This is the question everyone should be asking themselves after the past 3 games the Houston Texans have played. An 0-3 record is nothing to brag about, but Mills had moments where he has looked decent given the circumstances surrounding him.

We all know the narrative surrounding Mills when he was drafted 67th overall in the 2021 NFL Draft., he was the #1 High School Pro Style QB in the nation. He had the choice to go almost any Division-I Football program, and he chose Stanford.

Knee injuries limited his playing time in Stanford, but enough talent remained where he was considered as a Day 2 QB prospect by almost everyone who evaluated him throughout the draft process.

Being talented isn't enough to put all your eggs in one basket but drafting Mills with the 3rd round pick wasn't the worst decision to make considering all the uncertainty that surrounded Deshaun Watson and the 2022-2023 QB classes.

If these next few classes are going to be bad for picking a potential franchise quarterback, there is no need to go on and force a pick in the first round to please the media or the Houston fanbase.

Mills was a safe pick to a certain extent with QB Coach Pep Hamilton having extensive background information on him due to his established connections with David Shaw and Stanford.

Even in this year, Mills hasn't looked like a fish out of water compared to his rookie QB peers. It is completely normal for rookie quarterbacks to struggle as they make the leap to the pros, and not every QB can be Deshaun Watson or Justin Herbert right off the bat.

However, Mills has looked decent at times and looked rather well considering the fact he has faced 4 of the Top 5 NFL Defenses in his 3.5 starts.

I was pretty vocal in letting Tyrod start as long as he could before he turned it over to Mills towards the end of the season. This was before we witnessed Tyrod look like a Top 15 QB and keep the Texans in a position to win vs. the Jaguars and the Browns.

Despite it being a small sample size, Tyrod impressed in the 1.5 Texans games he played:

With the way Tyrod was playing, there was no way Mills saw the field unless Tyrod got injured and that was exactly what happened. Mills came in the 2nd-half vs. the Browns and finished 8-18 for 102 yards, 1 TD, and 1 INT.

Despite the obvious rookie mistakes that he made in his debut, I reminded myself of the fact that he was very well a QB prospect coming out of college rather than a Day 1 projected starter. Playing on the road, against a hostile crowd, things could have gone a lot worse for Mills. Yet he finished with 1 TD and 1 INT.

However, with how Mills looked in the preseason, I was hoping for the best, but expecting the worst moving into his 1st start against a stingy Carolina defense. He finished 19-28 for 168 yards (67.9% completion) and 1 TD.

That was a honestly solid performance in my book. Not because he lit the world on fire (he didn't), but he held his own against a defense that beat him over and over again. The playbook was very conservative to make sure he didn't turn the ball over, and he did OK given the circumstances he was in.

Breaking down Mills performances on the road vs. home

In my book, Mills has only had one game where he looked horrible and that was against the Bills. Facing a tough defense is enough of a tall task for an inexperienced rookie quarterback making their second start. However, to add to that, he was on the road and playing in a downpour.

That's not to make excuses for Mills, but I'd find it difficult for many quarterbacks to thrive in those circumstances.

Money matters and so does success

In David Culley's most recent presser, he reiterated that Tyrod will be the Texans’ starting QB when he returns from his hamstring injury. Culley also mentioned he doesn’t believe in players losing their job to injury and thought Taylor still gave Houston the best chance to win.

To his credit, that isn't the most outlandish approach to have at this point. It is not just about making a QB switch and moving forward. This isn't Madden.

Culley has to take Texans locker room into consideration too. Players don’t like losing and a veteran QB like Tyrod, will normally give you a better chance to win than a rookie QB.

Texans don’t owe Tyrod anything (its the nature of business in the NFL), but they could give him a fair shake. If he balls out and wins games, that’s a positive for the players in the locker room and the people following this team.

This team still has a small chance at making the playoffs if they care of business in the AFC South.

Let Tyrod play and try to keep the team competitive. If the team gets to the point where they are in playoff contention, that's great news for a team that was ridiculed and counted out during the entire offseason.

At this point, Mills hasn't struggled immensely, but he hasn't done enough to completely shut the door on Tyrod. So it makes sense to give Tyrod his shot.

However, if Tyrod struggles in his return and goes 1-3 or 0-4, there is no need to continue to play him. With a 2-7 or 1-8 record. Might as well let Mills play at that point instead of doubling down and playing Tyrod.

According to Tom Pelissero, QB Tyrod's one-year, $5.5 million deal is worth up to $12M with incentives -- and the first $4M is reachable if he retains the starting job all season.

Before the season started, these bonuses were an obvious incentive for Tyrod to play well, but it could also be a reason for him not to play if Texans start stringing losses.

It shouldn't be the deciding factor, but it makes sense to save money and see what Mills can do instead. If Mills has the opportunity to be something, it would be better to have a clearer picture of what they have at the QB position heading into 2022.