The Houston Texans took an extremely aggressive approach to 4th downs last year, trusting Quarterback Deshaun Watson to make some magic. They were tied with Jacksonville for attempting the 4th most 4th downs in the NFL (25), and completed them at the 13th highest rate of 52%. BOB has long been passive on 4th downs, but now finally having a franchise QB in Watson that he can trust, he's completely changed his philosophy. Converting these 4th downs at a high rate is game changing, so let's take a look at three concepts the Texans leaned on to get the job done last year. 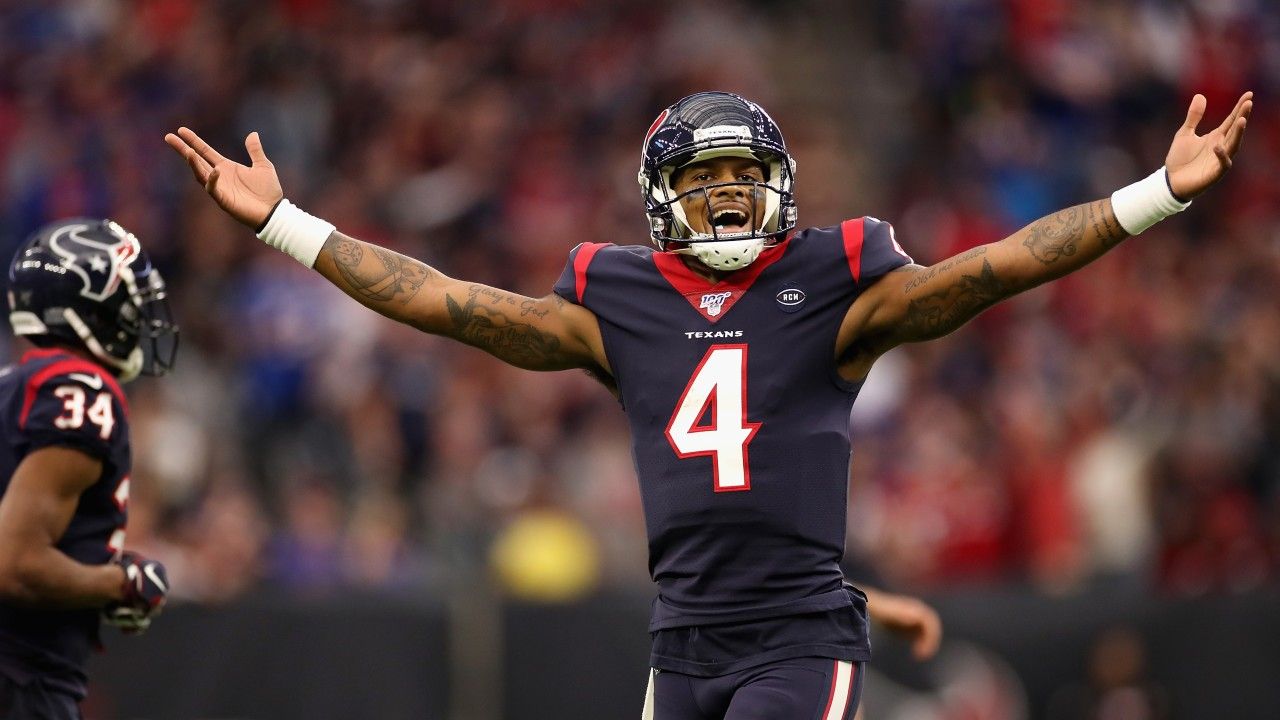 In my opinion, the best strategy the Texans followed was putting the ball in Deshaun's hands, and trusting him to make the right play. He's undoubtedly the best player on the team, so on a crucial down, why would I trust in my defense, or put the ball in a RBs hands? There's no good answer, and Deshaun has shown he has the clutch gene to complete this tough situations. Obviously just calling a pass play isn't always enough, and one thing the Texans did that I loved was stacking their two best WRs on the same side, and forcing the defense into a predicament. Last year that was DeAndre Hopkins and Will Fuller, this year, Brandin Cooks and Fuller (when healthy) are the top dogs. But after watching extensive film, Stills and Cobb are a LOT better than I initially thought. so this strategy really cant go wrong.

On this play versus the Kansas City Chiefs, Hopkins and Fuller are stacked on top of each other at the bottom of your screen. Having these two on the same side of the field makes it much harder for the defense to double one of them, and if you give Hop or Fuller 1-on-1 man coverage, they're going to win 9/10 times. The Chiefs love to press, and while Hop is pressed, the defender guarding Fuller is giving him a huge cushion. You can't give Fuller this much space, and you can see how easily he gets open. But the play isn't going to Fuller, Watson is locked on Nuk (for better or worse) and finds him over the middle of the field. All Nuk has to do is get physical with the CB jamming him, and make a cut inside. Money

That 4th down kept the drive going and helped keep up momentum, a powerful tool in the game of football. This next play however, ended the game entirely. On 4th and 3, the Texans know they don't have to do anything fancy. With the Chiefs in Cover 0, they also know they need to get the ball out quick. This play looks almost identical to the last pre snap - Hop and Fuller stacked to the bottom of your screen, with Hop being pressed, and Fuller has off coverage to deal with. This time, the WRs execute a nice rub route to get each other open. Rub routes kill man coverage *see Chiefs playoff game :( and we were unstoppable when Nuk and Fuller ran them. They run a switch release, where Nuk brings his release to the right, then the left, and Fuller does the opposite, going left first, then finishing right. This messes with the CBs guarding them, and they end up running into each other, and leaving Nuk wide open over the middle of the field. Poor Tyrann Mathieu reads it but is too late with his diving attempt. 4th down completed, game over!

As mentioned before, we can run these rub routes out of stacked formations with really any WRs. This time its Nuk and Stills who execute it beautifully. The Ravens are in man coverage, but it's not as simple as CB1 as Nuk and CB2 has Stills. The Ravens are trying to prepare for the rub route, so the CB who is pressing has whichever WR breaks outside. Thus, the CB who is in off, has whichever WR breaks inside. It's sort of zone, but not really, the idea is that this makes it harder for the CBs to run into each other, as they should never have to cross paths.

Now I don't know if Nuk noticed this pre snap or not, but he does really well to still force contact and slow down the CB. Off the snap he runs forward aggressively and creates contact with the CB who's on the LOS. This acts as the pick and because its within 5 yards, it's legal contact. You can see how this prevents the CB from getting outside to Stills on the quick out route, and makes this such an easy conversion.

The next play is sort of the same call, but just not executed as well. Bottom of the screen yet again, Hop and Stills are lined up very close to each other, but not stacked on top. Hop tries to delay his release a little bit, and have Kenny run his man into Hop, but Kenny doesn't do it quick enough, and Hop can't just stand there all day long. Luckily, Kenny wins inside just enough for Watson to squeeze the ball into him. The ball placement is what converts this, as the CB is draped all over Kenny's back shoulder. He did a great job to recover and even get a hand into the catch point. But because the ball is so far out in front of Kenny, and away from the CB, there's just nothing any defense can do about this. A perfect throw will always beat perfect coverage. So even if the routes aren't perfect, Deshaun can always get the job done. The ball placement is perfect, but also the arm strength to laser it in there, before the LB can get over to stop it from the middle.

Another area where the Texans succeeded in with their 4th downs was when they ran RPOs. It was an extremely successful concept in certain games of the season, but got predictable later on. Nonetheless, early on it looked unstoppable, especially when targeting electric Jordan Akins. Akins is faster than most LBs in the first place, let alone when you get them stuttering and a step behind the play.

Versus the Jaguars, the Texans are in their very popular 2 TE set, with Akins in the backfield acting as an H-Back. There's two reads on this play; first, since Yannick Ngakoue (#91) comes crashing down, Watson fakes the handoff, and takes it instead (like your typical read option). Second, since the Safety (#31) comes crashing down to stop Watson from running, and the Myles Jack (#44) is too far away, Watson hits Akins out of the backfield and its an easy conversion.

If Ngakoue doesn't come downhill, Watson would hand it off, and if any defender makes contact with the TE, then Watson would just keep running with it. That latter scenario can be perfectly seen versus the Oakland Raiders. We demolished them with the RPO game all day long, and with a crucial 4th down at play, why stop now? The right Defensive End (top of screen) crashes down yet again, so Watson takes the ball. But this time there's no safety even close to being in position because he attacks inside, and Laremy Tunsil picks him up. However, the RDE is so physical with Fells, he slows down his route. Watson sees that, and also sees no other unblocked defender coming to fill the C gap. So he keeps the ball himself, runs to the outside, and converts yet another 4th down.

Here's another example of how effective this play can be, even if the defense is in perfect position. The RDE, Jason Pierre Paul (#90) crashes down again to stop the RB. Watson takes off and Laremy Tunsil misses the block on LB Lavonte David (#54), so he is staring down Watson. Fells doesn't pick him up because he's running a route, but the outside CB comes downhill quickly and would've prevented a 1st down if thrown at. Watson sees all of this and knows it's on him to make a play. 1-on-1 against one of the best LBs in the NFL in David, and Watson makes him look silly. Even if you're in great position to stop the RPO, there's still the unpredictable element of Watson's legs. He doesn't show off often, but he's still one of the best running QBs in the league. He proves that here with a nasty juke inside, forcing David to only clip Watson's knee, instead of taking his head off. Watson is a fighter, and he dives forward for the 1st down. Nothing is stopping this man.

I love Duke Johnson, if you don't know that already, well, there you go. I love him. I think he's awesome, has always been under-utilized, and is the best RB this team has had since Arian Foster (yeah, okay, not saying much). The Texans apparently loved him too, in these 4th down scenarios, as they went to him a couple times and trusted him to get the job done.

In the last game of the regular season, glorious QB AJ McCarron is looking for Duke Johnson the entire way. Once the ball is snapped, you can see him staring down the left side of the field. WR #11...who btw? is setting a pick route on the CB in front of him, trying to get Duke enough room to get the 1st. With us resting our starters, Duke was clearly the guy they trusted the most on a crucial down (they should trust him even with our starters) and he rose to the occasion. Okay, he didn't really do anything special here except catch the ball and run forward, but I LOVE DUKE JOHNSON.

Did I mention we should feed Duke? No? Okay, well we should FEED DUKE MORE! I'm sorry, I'll stop now, but it's just proven to be so successful over and over again. I really don't get why he doesn't get more targets, well, actually that would mean BOB doing something smart, which he doesn't really do... so there's my answer! Anyways, now I'll really stop.

One more play here of us going to Duke on 4th down. Fells and Stills are trying to open up the right side of the field for Duke to get in space and it works. Fells runs into the LB (#56) just enough to create contact, setting somewhat of a pick, and making it harder for him to chase down Duke. Stills cuts inside and while he doesn't create any contact on a pick, he gets the CB out of the way, and the LBs just can't keep up. Another first down that looks so easy.

The Texans uber-aggressive style when faced with 4th downs was refreshing to experience. Watson is at the elite level where he will complete these plays more often than not (see 52% conv rate). That number can get even better though, there were 3 times last year where we ran the ball, trying to convert the 4th, and failed. Taking those away, putting the ball in Watson's hands, and assuming he converts them, would put us at a 64% conversion rate, which would rank 4th in the NFL. There's always room for improvement, so as good as we were last year, this can get even better and make our offense even more dangerous. Extending drives obviously gives us more scoring opportunities, but it also keeps our defense off the field for as long as possible, which will have major benefits. I'm really excited to see what other concepts we start to lean on for these 4th downs, because the last thing we want to do is become predictable. And if I could pinpoint these tendencies, imagine what NFL coaches can do.