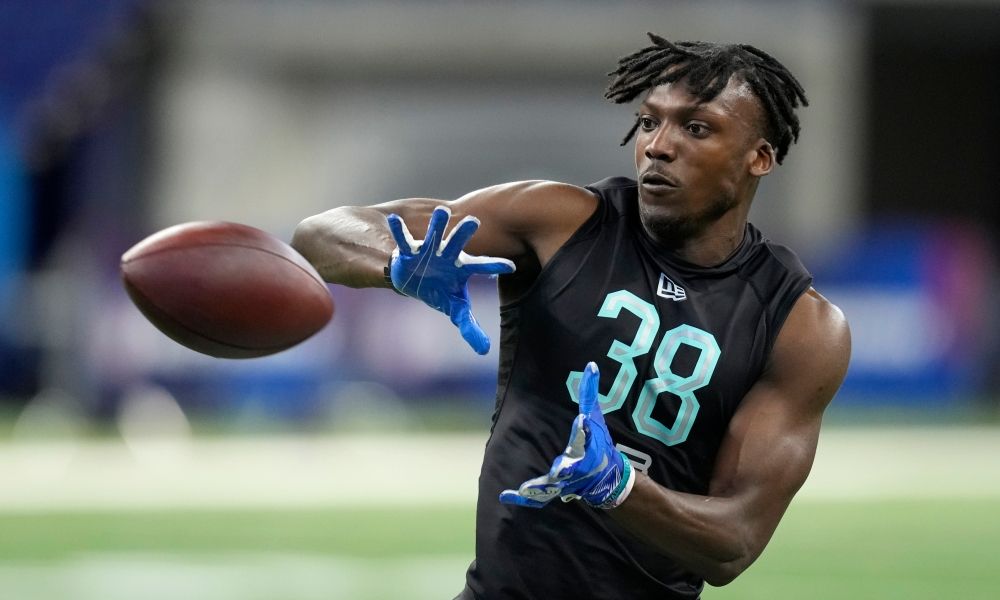 Film Review of the Fastest Players at the 2022 NFL Combine

The 2022 NFL Combine was historically impressive with every position group running jaw-dropping 40 times and many prospects making themselves some serious money. The tricky thing about these athletic tests is that not every player runs 40 yards on the field as fast as they do on the track - especially with no pads and after months of refining their technique.

Therefore, for this article I wanted to accomplish three things; firstly, watch some of these exciting athletes who I hadn't seen before. Secondly, see if their testing scores are representative of their in-game athleticism. Thirdly, project where I would draft them if I was the Texans GM, Nick Caserio.

The five players I will break down today are not first-round prospects but all fit the Houston Texans in some way or another and would bring a much-needed boost of athleticism to the team. Without further ado, let's get into it because the film don't lie. 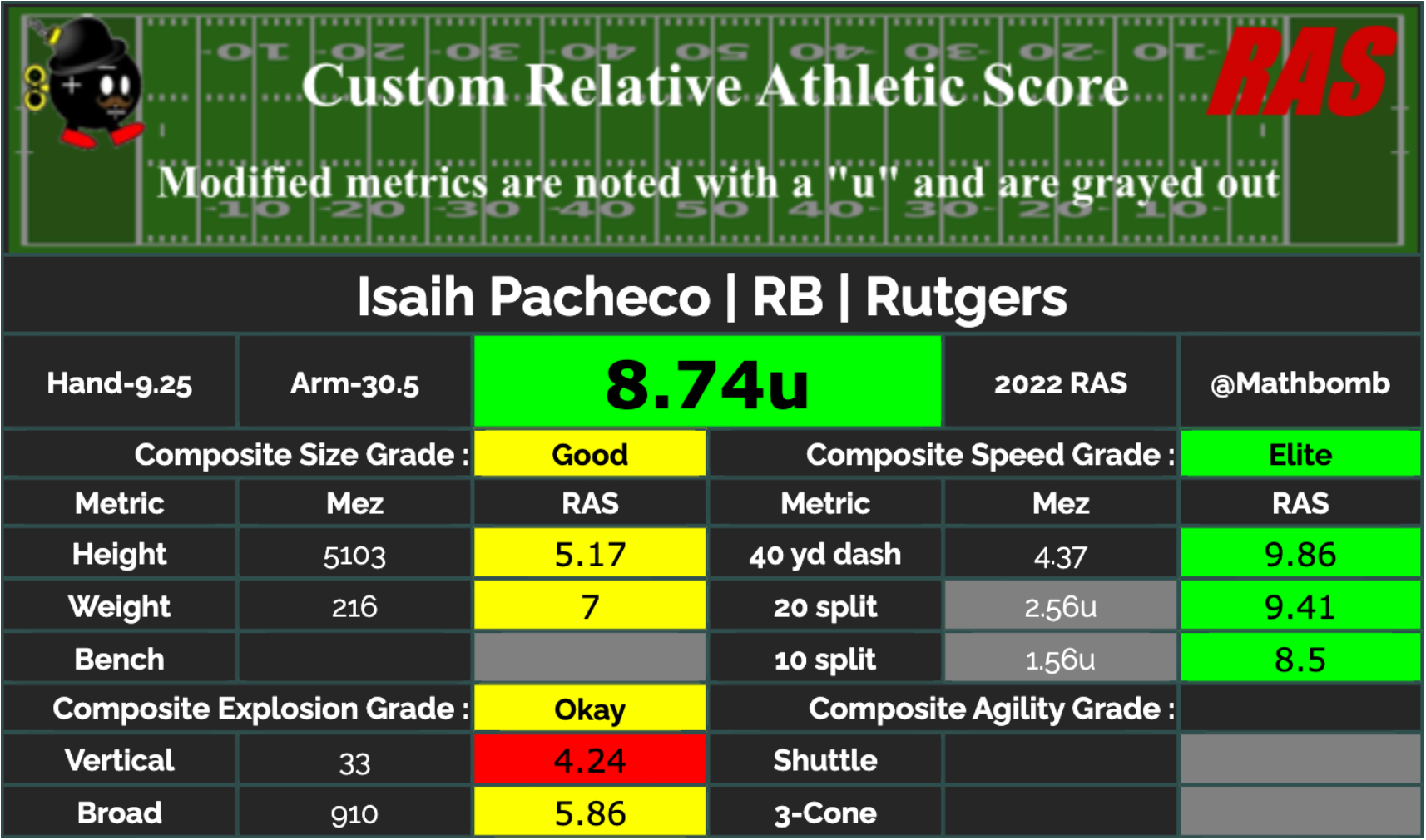 We'll be using a handy tool constructed by Kent Lee Platte called Relative Athletic Score (RAS) which grades every athletic test on a scale from 0 to 10 and compares it to every player historically who has taken part in these tests. For example, Pacheco ran the fastest 40-yard dash in 2022 among RBs but doesn't get a perfect score of 10/10 because historically, there have been other RBs with his size who have run even faster.

With that nugget of context out the way, let's break down Pacheco's game. He earned an elite grade for his speed and after watching his film at Rutgers, it certainly translates in-game. Pacheco regularly beat pursuit angles to the edge and showed his open-field speed by ripping off explosive runs vs an elite Michigan defense.

That speed is enticing but it's not the only requirement out of a successful RB. Pacheco also showed flashes of being able to press the hole and then bounce his run towards a vacant gap. In addition, Rutgers ran a lot of gap/power concepts - like the Texans plan to do - and Pacheco was diligent in following his pullers.

That will surely make the Texans brass happy and so will his execution of passing-down duties. Pacheco regularly understood his assignment and was quick to find rushers to block, even showing some feisty competitive spirit to engage defenders who were much bigger than him.

This is where I ultimately see Pacheco finding a role in the NFL - as a change of pace back who is a reliable pass protector. Due to that limited role and his lack of play strength to truly finish runs well and add yards after contact, I view Pacheco as a late day-three pick. Due to the depth of the RB class, it wouldn't surprise me if Pacheco was still there in the 7th round and that's where I'd happily take a flier on his skillset. 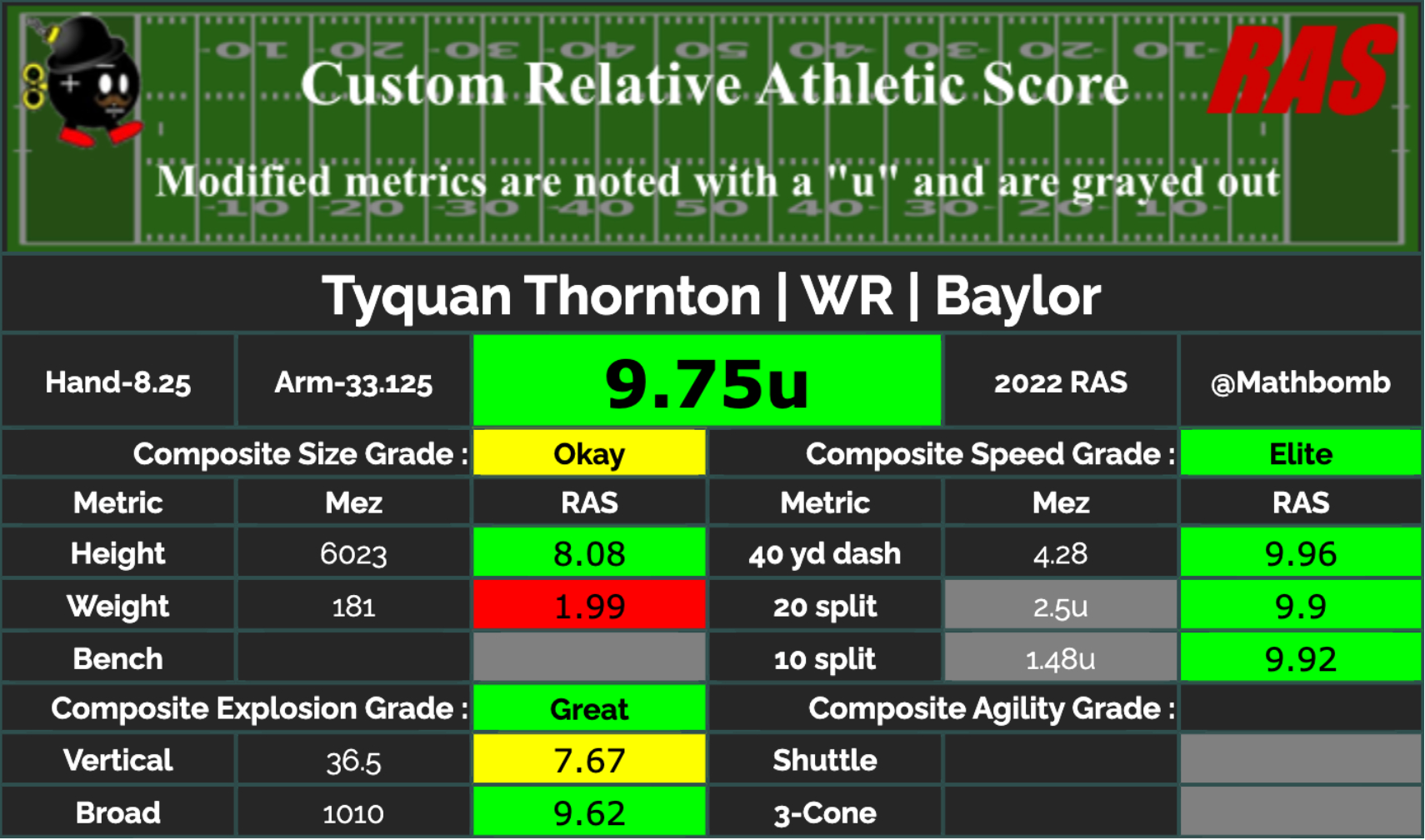 Next up is the WR with the fastest 40-time. Thornton played the X-receiver position at Baylor and really excelled at stretching the field vertically. His speed DEFINITELY translates to the field and while I wouldn't put him in the John Ross tier of speedsters, his long graceful strides at his height remind me of Julio Jones. Now, Thornton isn't nearly the complete receiver that Julio is but he is a big play waiting to happen.

After my first viewing of Thornton, I came away impressed with his purposeful releases and how he attacked defender's leverage to set up his routes. There are flashes of route salesmanship in there and with the right coaching, Thornton can become a good starter as a third option for offenses.

Furthermore, Thornton's speed is a weapon in the deep and short areas of the field. He blazed past corner's on post routes but also separated horizontally on slant routes. Additionally, the threat of his speed often led to soft off-coverage and opened up easy opportunities for out routes underneath.

Overall, Thornton also displayed astute deep-ball tracking and dependable hands in difficult scenarios. On the flip side, his high-waisted build limits his ability to get low and make consistently smooth cuts which makes me hesitant to believe he can be a first option who runs a full route tree. However, if you set his expectations as a vertical threat who can take the top off and draw defense's attention, he will certainly make you a happy camper.

I graded Thornton as a late 3rd-round pick and would understand if the Texans took him with their second 3rd-rounder. He'd provide a sorely needed deep threat - especially once Brandin Cooks' contract voids in 2023 - who can provide Pep Hamilton a target for his beloved play-action concepts. 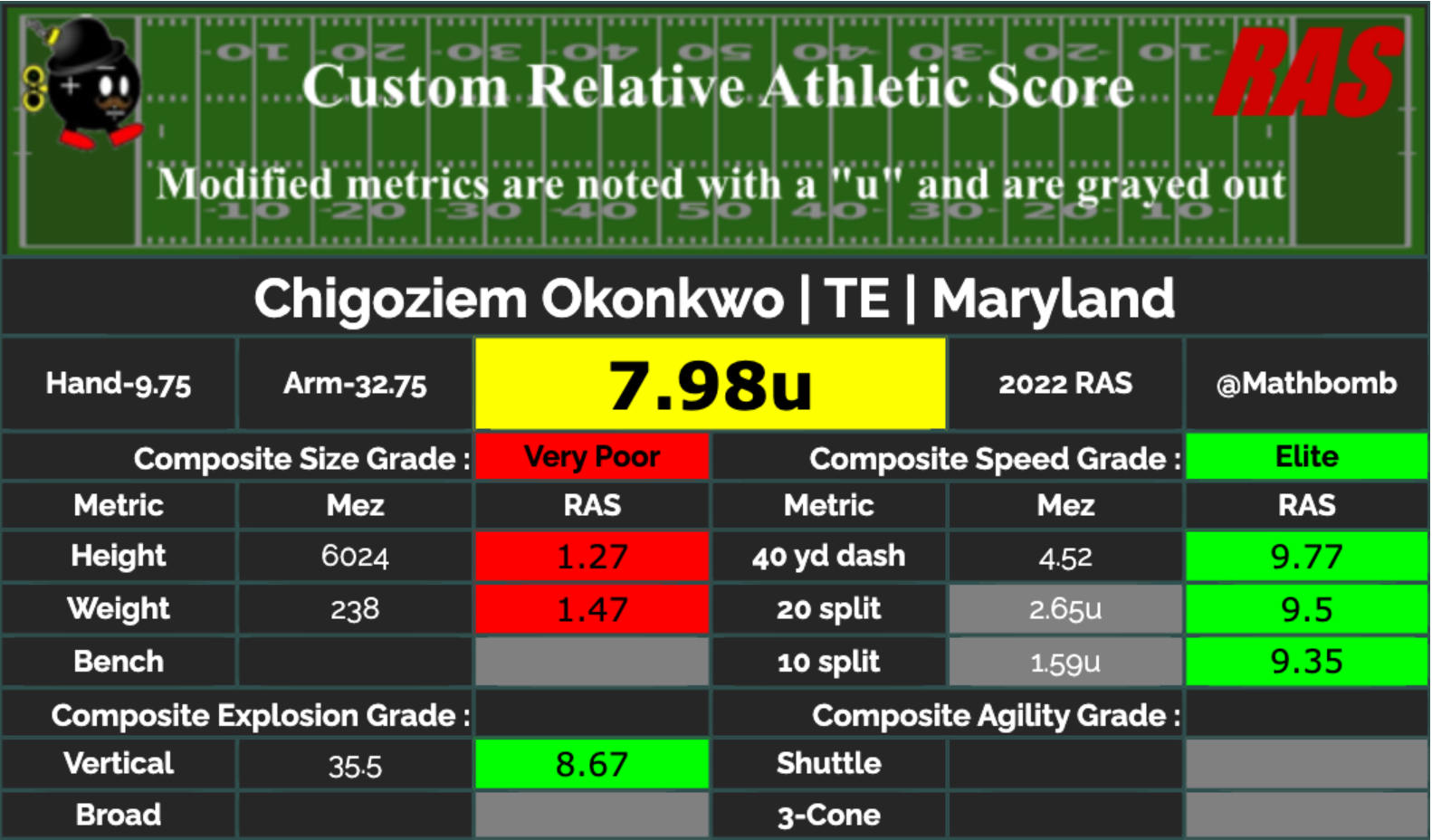 Another speedy offensive weapon, Okonkwo turned heads with his 40-time and poses an intriguing projection to the NFL. He played in-line TE for Maryland but at his size, that's not going to be his role in the NFL. He's more of a shield blocker who uses angles and effort to get in the way of defenders but isn't going to really create push too often.

Furthermore, he's not one of those uber-athletic TEs who can turn into a big slot receiver like Evan Engram or Darren Waller. This is because Okonkwo is a very raw route runner who had a large portion of his production manufactured by heavily-structured, easy touches in the flat while at Maryland.

All of that being said, there is an alternative role for Okonkwo as a H-Back or Fullback. As a TE, his RAS grades out as good, weighed down by his poor size grades. Whereas as a FB, his RAS is a perfect 10/10. 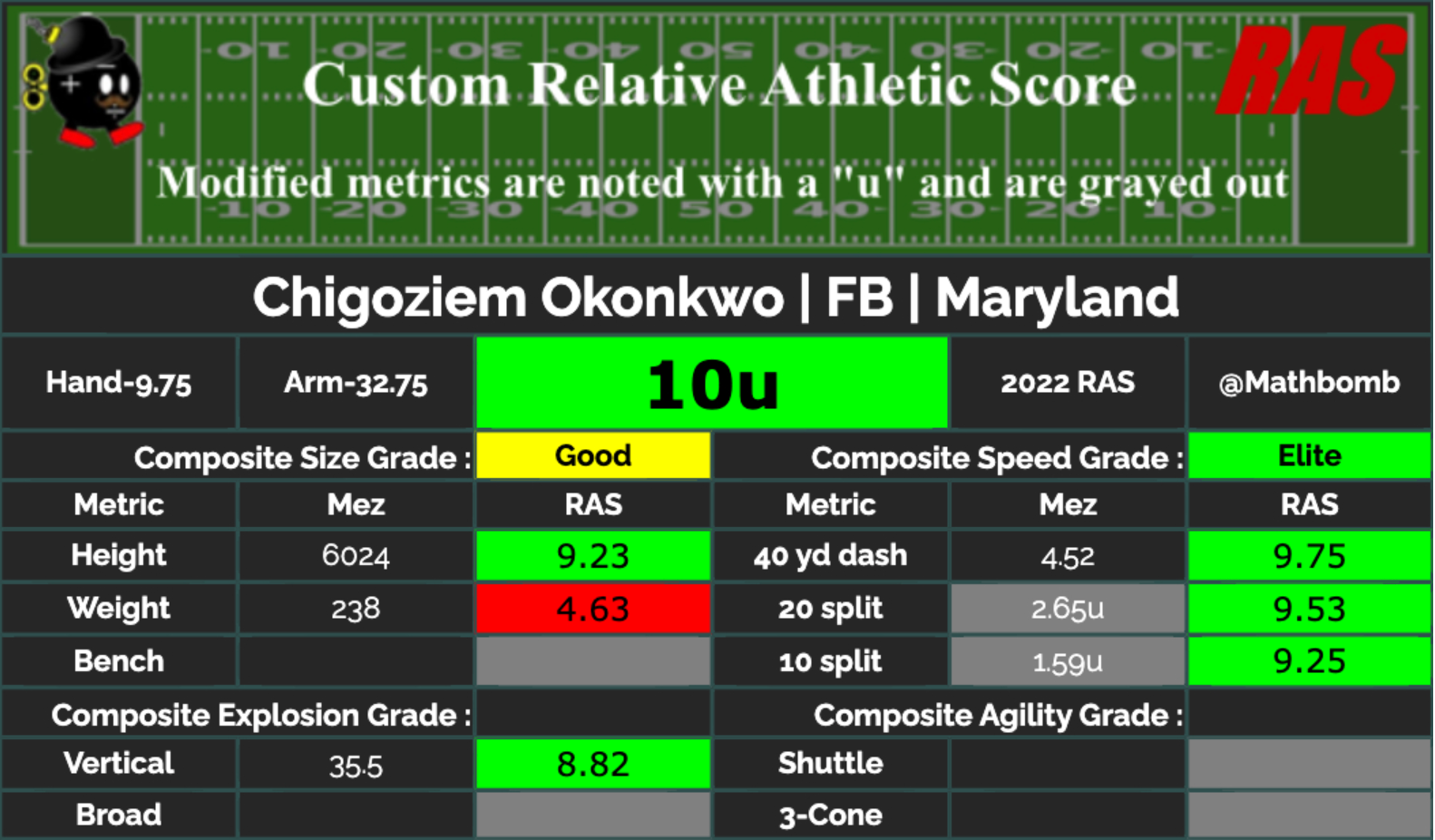 His skill set translates nicely to this new position as he is a versatile blocker who can pull, lead block, execute split zone and even make reach blocks. Additionally, his raw route-running is minimized as a FB and he can run simpler routes to provide another outlet for quarterbacks like Kyle Juzczyk has for years. Getting Okonkwo isolated in the flat or occasionally up the seam will help his speed shine.

For the Texans, Pep Hamilton may want to add a FB to help with his beloved power run game. Much emphasis has been made by Hamilton and Lovie Smith on improving their ground game and that seems to be a foundation of the identity they want to install.

During his three years as OC with the Colts, Hamilton always had three tight ends he could trust - Dwayne Allen, Coby Fleener and Jack Doyle. I would expect Hamilton to execute a similar game plan, adding a pure blocker and a versatile blocker plus receiver, to the receiving-oriented Brevin Jordan. Okonkwo in the 5th round would make a lot of sense and help our offense get more creative and dynamic. 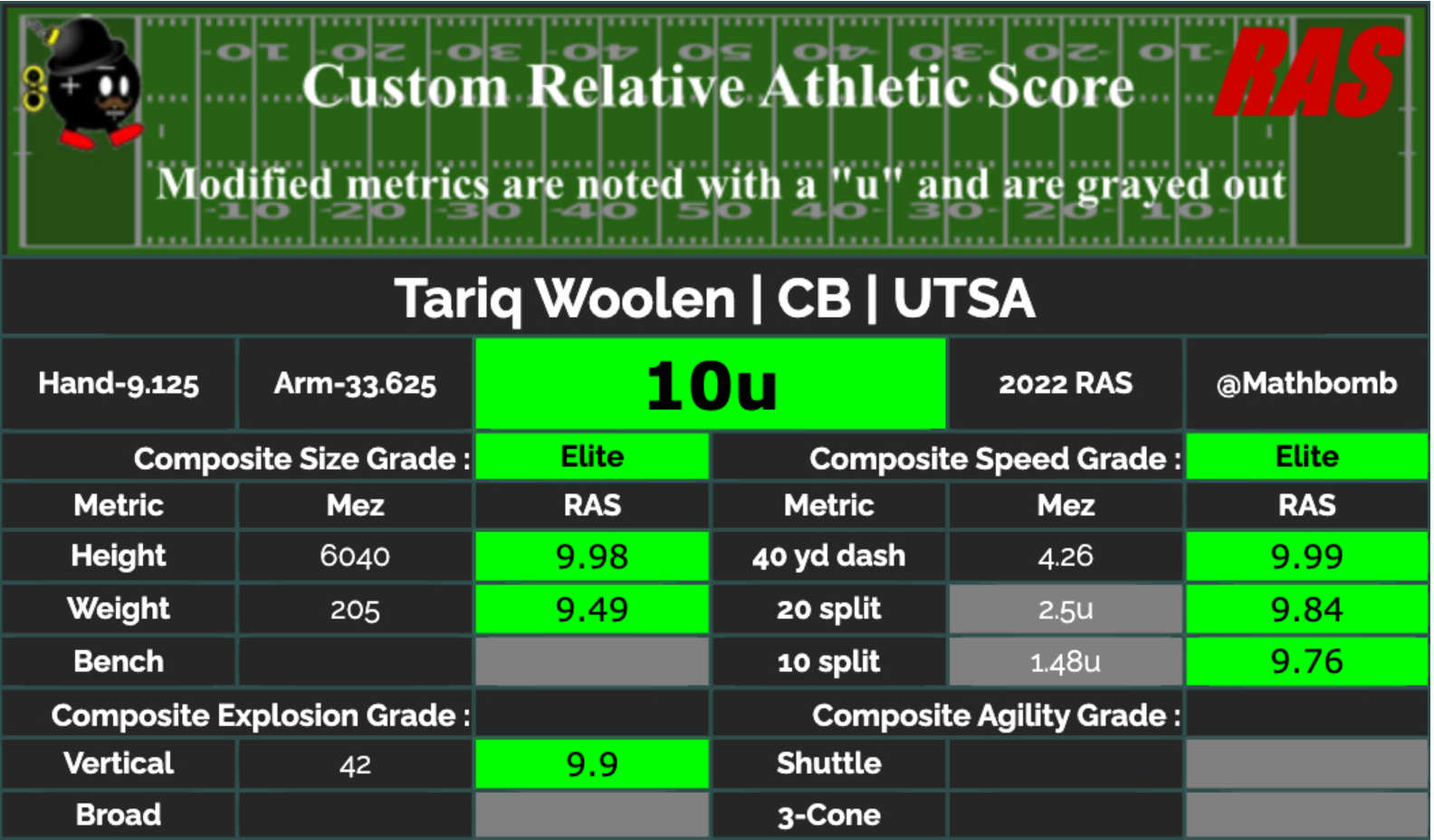 Moving over to the defensive side of the ball, these next two players are guys I had already watched and was happy to see their test results confirm my opinions of their athleticism. Woolen is easily one of the three freakiest athletes in the entire class and his potential will certainly get him drafted higher than most expect.

At his height and weight, Woolen should not be able to move as well as he does but at the combine, he defied all logic. On the field at UTSA, his 4.26 speed doesn't fully translate as there were a few reps where he got beat deep. However, this one rep encapsulates Woolen as a prospect pretty damn well.

Off the snap, Woolen flips his hips to turn and run downfield with the receiver pretty fluidly. Yet, he loses about half a step which encourages the QB to attempt a throw deep. Then we see a major issue in Woolen's game - he rarely turns his head around to find the ball. Nonetheless, Woolen's athletic gifts make up for that flaw as his 33" arms find their way into the catch point and he breaks it up.

Overall, Woolen has so many physical traits that you just can't coach. He does need work with his technique but projects as a scheme diverse talent with the ability to guard different types of receivers. For a Texans-related comparison, think about Lonnie Johnson who went in the second round in 2019 after a strong combine showing. Woolen is like if Lonnie went super-Saiyan, getting even bigger and even more athletic.

Just like Lonnie, I would expect Woolen to be taken in the early-mid portion of the second round and he should be afforded more patience to develop his cornerback skills than Lonnie got. I would go as far as to say that coaches shouldn't expect Woolen to start as a rookie - maybe not until the final few games after he's shown improvement. Yes, he's THAT raw and corner is THAT difficult to transition to. However, the ceiling is so enticing and his fit as a press-zone corner for Lovie Smith's scheme is so perfect that I'd be happy taking him at the top of the second. 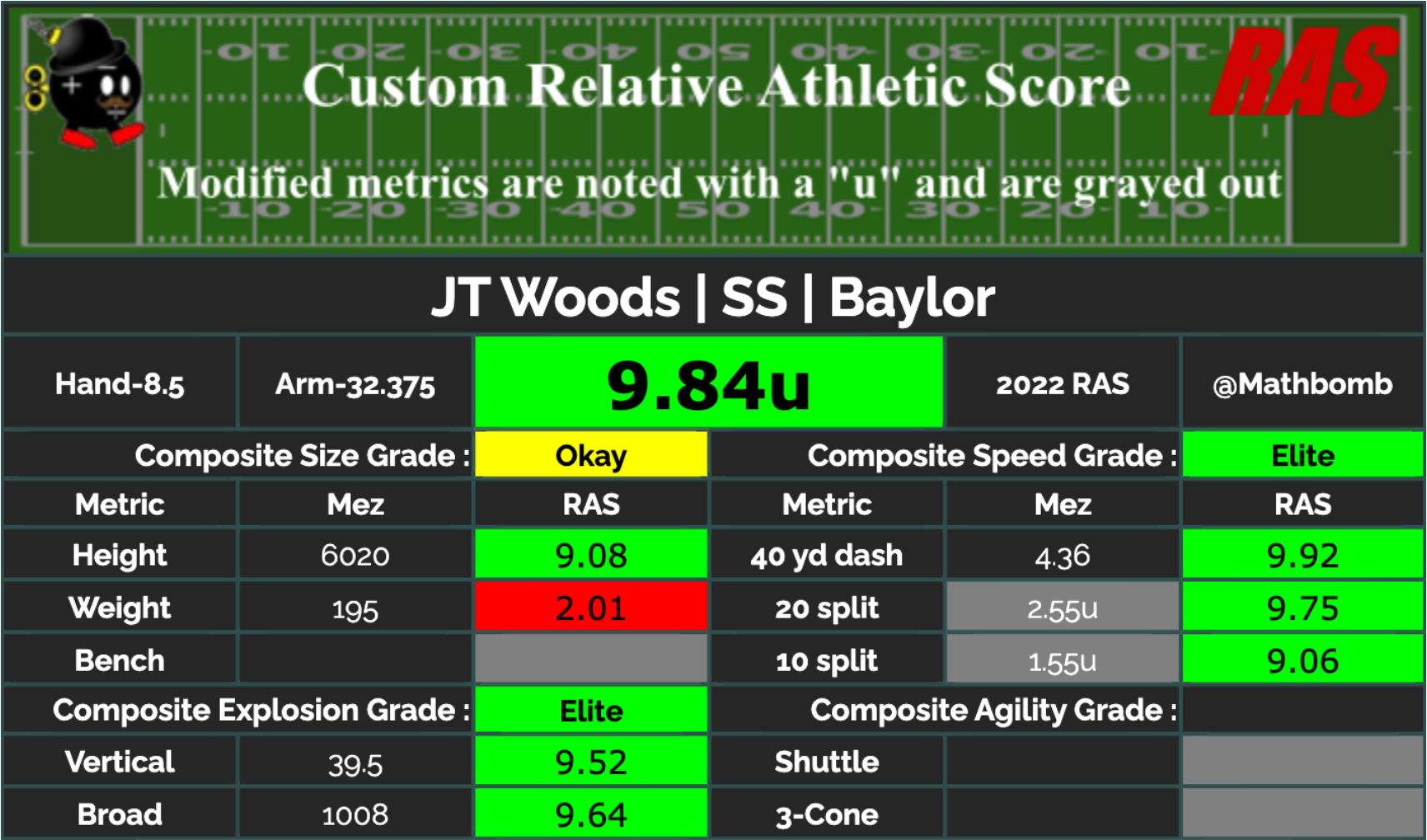 Rounding out this group of freaks is one of "my guys". The Baylor products really put on a show this combine and it's only right I give Woods his rightful praise as an underrated prospect. With his height at six-foot-two, Woods' explosiveness and rangy speed translates directly to his film.

He's one of the best ball-hawks in this class who tied for the most interceptions in college football in 2021 (with five). Woods' instincts allow him to know where quarterbacks are trying to go with the ball and that explosiveness allows him to trigger quickly and fly towards the throw.

His stock is floating around day three and if he's there in the fourth round, I'd happily draft him for the Texans. While Safety isn't the most important position in Lovie's defense, he prioritizes turnovers and having a ball-hawk like Woods as a free safety will help generate some much-needed takeaways.