Deshaun Watson is Unstoppable Over the Middle of the Field

Houston Texans Quarterback Deshaun Watson should inspire confidence in any Texans fan, and if he doesn't, I think you're insane. He's improved so much since he entered the league but one thing has remained the same - his love for targeting receivers over the middle of the field. 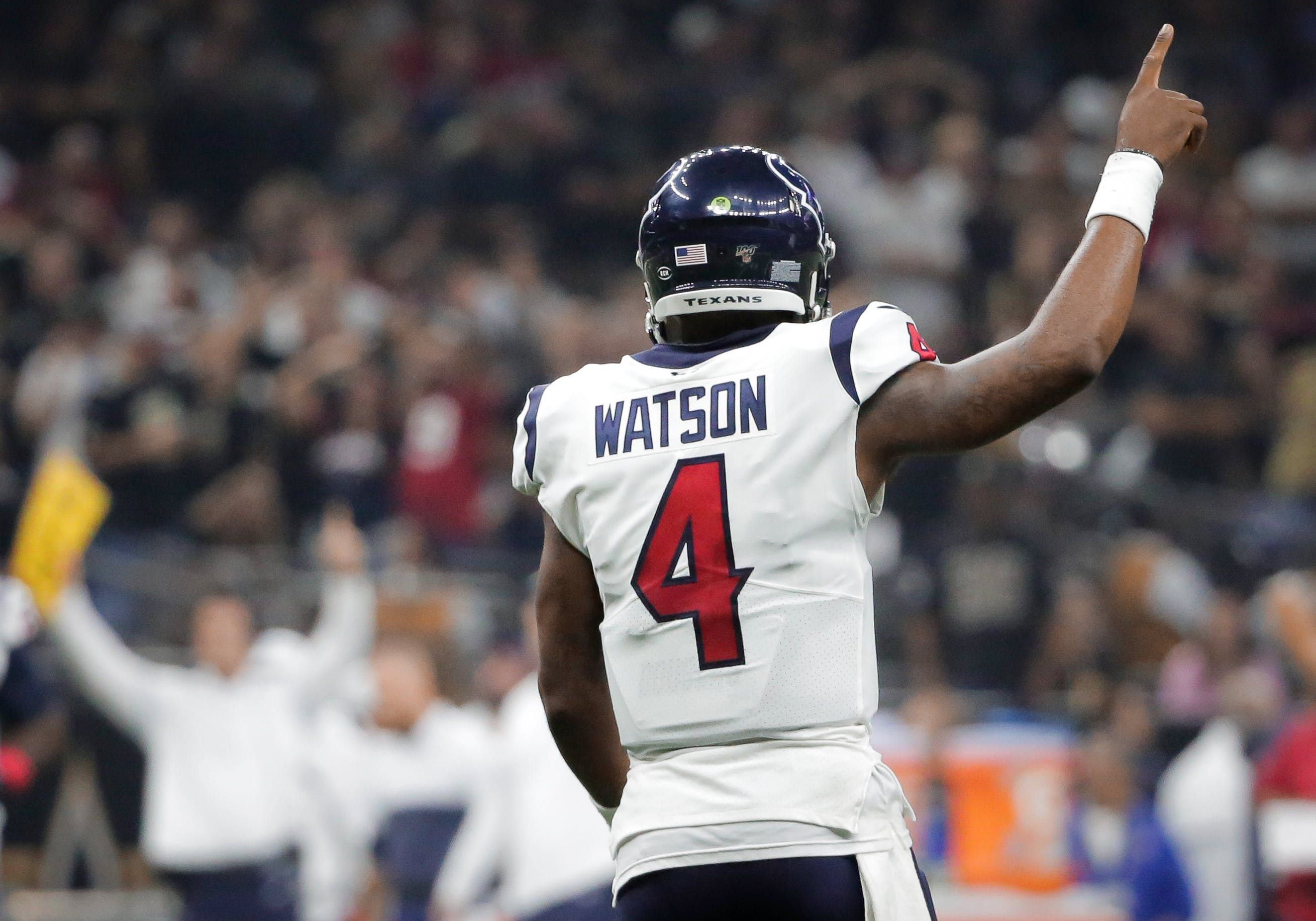 On throws 10+ yards down field and over the middle, Watson has a passer rating of 106.5, compared to the average passer rating of 91.3 (see Next Gen Stats below). That difference shows how elite he is when attacking that area of the field, and it can get even better with Randall Cobb. I will have a Youtube video out this Thursday on Cobb and how he fits with us. But for this article, I will be looking at how we've been using DeAndre Hopkins over the middle and why Deshaun is so dangerous with these throws. 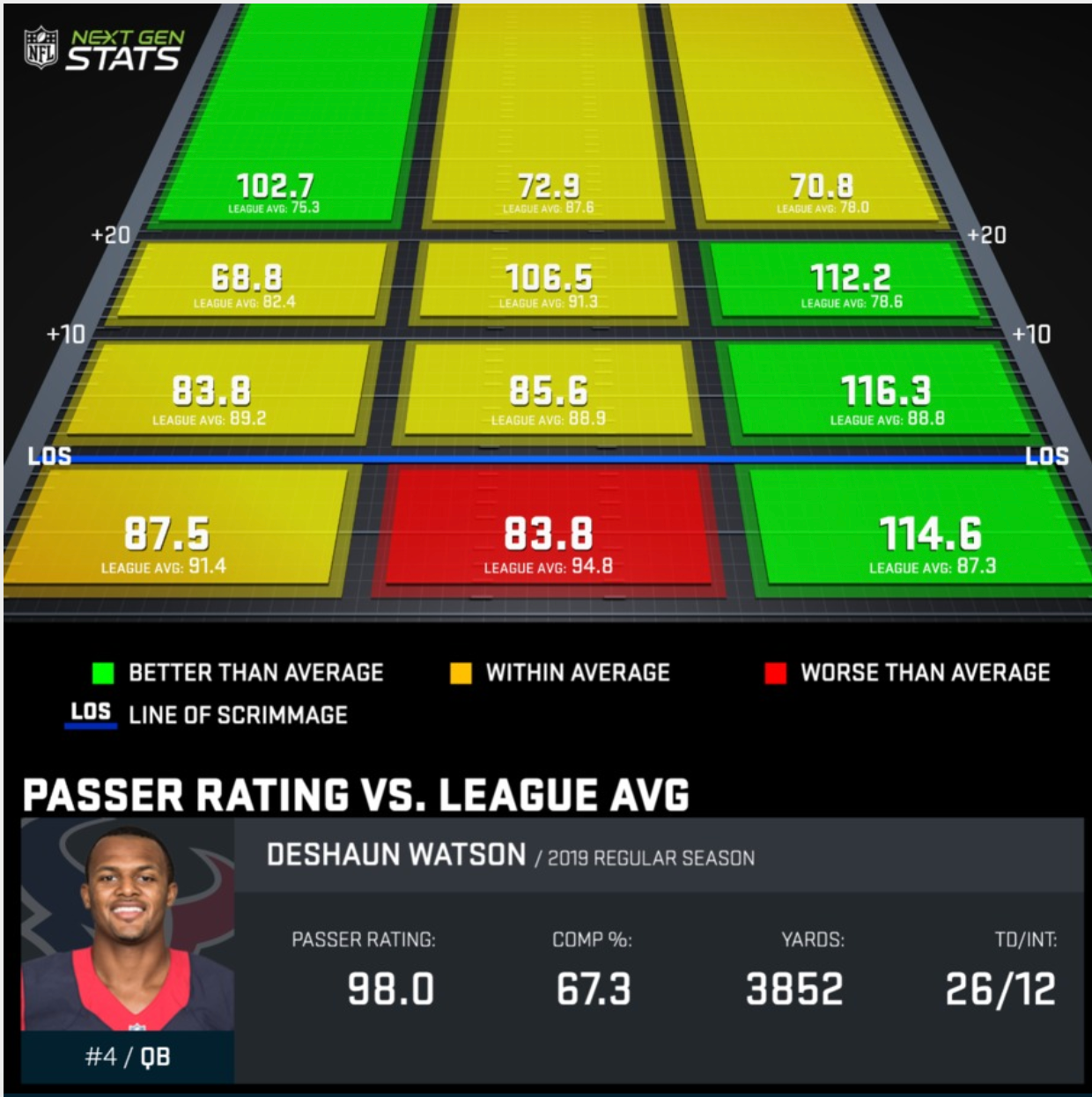 Why Attack the Middle?

In many defenses the middle of the field can be a huge weak point. Us Texans fans should know best, most LBs aren't made to cover, and attacking them with WRs is a great way to get easy yards. Hopkins has long made a career of highlight sideline catches, but recently we've been running him over the middle far more often. Digs, slants and posts have become second nature, and they are great routes to attack the holes in a zone defense.

On this play vs the Patriots vaunted defense, Hop is the #2 WR in the bunch, and the Pats are in Cover 2 Zone. Hop is running a deep dig, gets past the SS (#23) hook zone, and settles right in front of the 2 deep safeties. You can see the clear hole in this zone, 15+ yards downfield (Watson's sweet spot) and it looks so easy for the offense.

Similar thing here, but you can really see how the play action fake effects the LBs and draws them in. This makes it harder for them to get back into their zone and stop the throw over top. Hop is running a post over the middle and right into LB (#59) zone in the Tampa 2. He tries his best to get back, but it's too late, and this is such a routine throw for Watson. The ball placement is perfect, because you can see 59 is running to the right of Hop, trying to beat him to the angle if Watson leads the ball out in front of Hop. Watson sees this and instead of leading him forward for more YAC, he puts the ball slightly behind Nuk and the LB, so that he can fit it into the window nicely.

So throws over the middle can kill Cover 2, but what about Cover 3 or Man Coverage? Well, this next play is perfect to answer that question. The Colts are in Cover 3, but they are playing a match technique, which simply put means if a WR comes into your zone, you start to play man coverage on them. This can be best seen at the bottom of the screen with CB Pierre Desir (#35). He's playing a deep third zone, but when Hop breaks inside on the slant, he follows him because he's "matching" the route. But you can still see the LBs are sitting in hook zones over the middle of the field, and the free safety is playing single high a la Cover 3 Zone. This makes the window over the middle a bit tighter as Watson needs to fit the ball in between the LBs. No problem for Watson though, these throws are like layups for him.

Slants over the middle have long been Watson's bread and butter, and it's especially apparent in clutch situations. Late in the 4th in the Chiefs game, Hop runs a slant over the middle to end the game. Despite the all out blitz, Watson reads this quickly, throws it and boom, GAME OVER. It's easy for Watson when we have weapons getting open over the middle of the field. He reads it quicker and is more confident in making these throws.

The Power of the Slot Wide Receiver

So we've seen how Watson loves to target the middle of the field, and how easy it is for him to pick apart defenses. What really interested me was how the Texans moved Hopkins to the slot, far more often this year than in the past. He played 23.6% of his snaps in the slot last year, up from 11.2% from 2018 (stats per Player Profiler). In addition, he was the 2nd most targeted slot WR in the NFL. On his 211 snaps in the slot, he was targeted 57 times, which is ridiculously high. That leads to a target percentage of 27% (stats per Pro Football Focus). This has become a trend around the league, trying to get WRs onto LBs or Safeties, giving them a matchup advantage. It is particularly helpful for someone like Hop, who has never been an elite athlete. So on the outside against elite CB athletes, things could be a bit tougher for him. But as I'm going to show you, he was unstoppable in the slot with Watson feeding him timely throws.

On this play vs the Saints, Hop is lined up in the slot and you can see how this gets him matched up on Safety (#43) Marcus Williams. As good as Williams is as a single high safety, he's not nearly as good when asked to drive forward and essentially play off man like here. Hop doesn't even have to run a great route (it's pretty rounded) but Williams cant close on the route quickly like a CB, and gives up the touchdown as a result.

Getting Hop inside gave him mismatches and made it even easier for the best WR in the league. We got him facing LBs with slow feet all the time, like here where he doesn't even look like he's trying, and easily gets past two LBs who look LOST in coverage. Watson is so good at making this throw, right past the LBs, but just in front of the Safety. He puts the ball in good position for Hop to brace for a big hit too, WRs love that.

This next play will look almost identical. Hop on a dig, past the LBs and in front of the Safety. It was the easiest way for us to move the chains and having Hop run it from the slot instead of the outside, allowed him to get to that soft spot quicker. This allows Watson to get the ball out faster, what we all want.

If the LBs back up too much to take away that dig, we can just hit them with quick underneath routes like below. This offense will be a "pick your poison" type of thing, and I can't wait to watch it.

As great as Hop was in the slot, Cobb has more potential due to his athleticism and juice. I've watched all of his tape with the Cowboys and I was pleasantly surprised. He's still got WHEELS and his YAC was ridiculous. He also had a 15.1 YPC, compared to Hopkins' 11.2 YPC. Be on the lookout for Dylan's article on him, and my video as well! Watson's work over the middle of the field is deadly, and this could be a damn good connection.