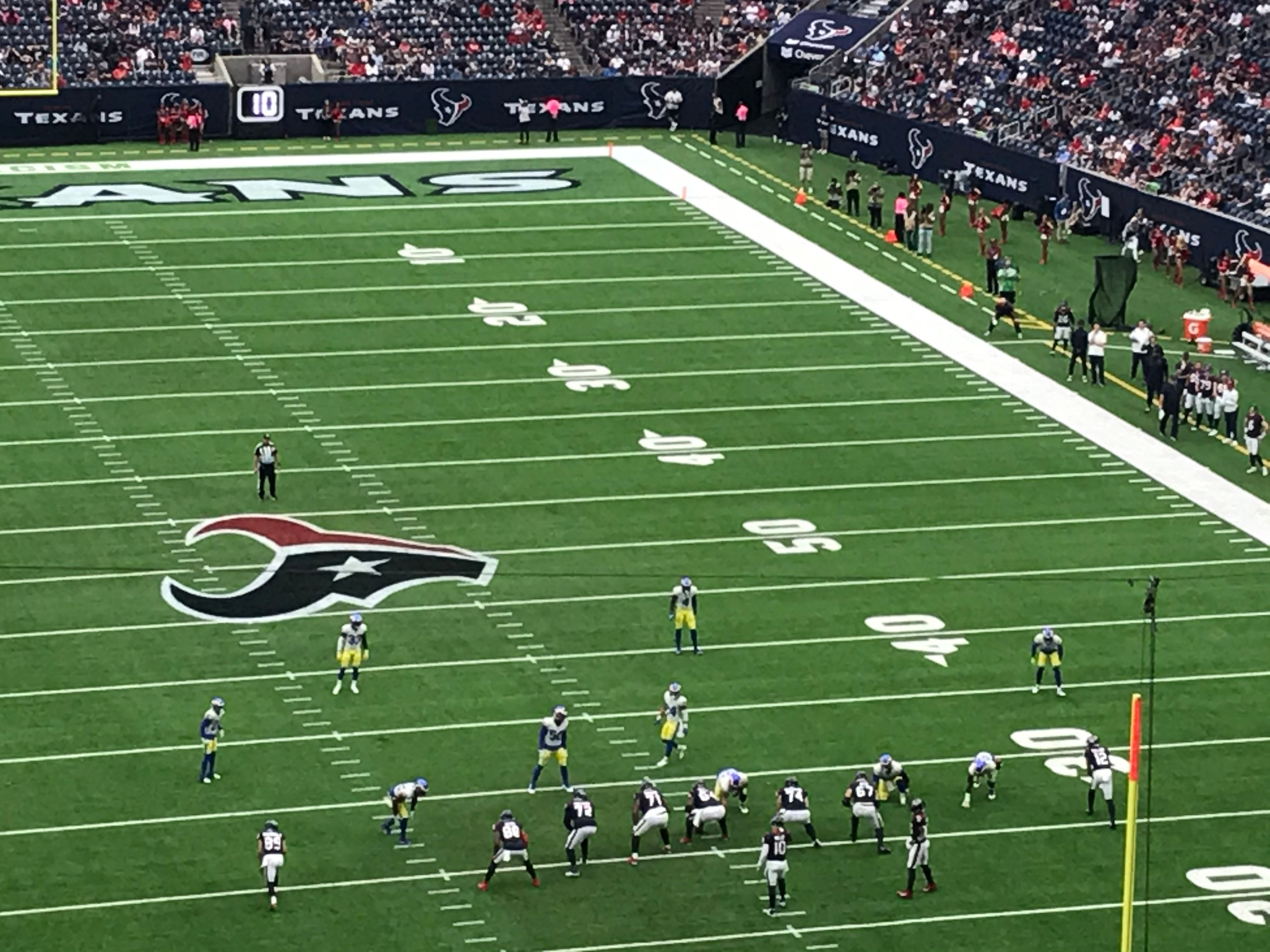 No matter what the players, coaches, or general manager Nick Caserio said, the outlook of the 2021 season was going to be a bleak one for the Houston Texans.

This team was not built to be an above .500 team, and it didn’t matter that the Houston Texans are in one of the weakest divisions the AFC South. And it’s goes without saying but it’s hard to be competitive when you’ve only had 1 1st round pick in the last 4 drafts.

Houston showed some sparks against the Jacksonville Jaguars but as bad as the 2020 team was, they earned 2 of their 4 wins vs. Jacksonville.

Losing Tyrod after the 1st half of the Browns game, it was obvious that this team was going to undergo growing pains with Davis Mills as the starting QB. Underwhelming talent/coaching, Limited playing time in college and a rookie QB playing against grown men. That’s not particularly a recipe for success.

The only way for Mills to blow away people’s expectations were if he had Watsonesque numbers in the passing game, the run game and play-calling weren’t going to save him. But as we knew, that was a lot to ask for a rookie QB.

Mills hasn’t completely looked out of place with the rest of the 2021 Rookie QB Class, but as Jordan (Texans Thoughts) mentioned, Mills hasn’t shown enough to show he’s potentially a franchise QB for this team. And that’s OK.

He was drafted in the 3rd round as a project for a reason. Maybe he doesn’t pan out, but the thought process was sound. It’s not a bad plan to draft a QB every few years to see if they can be something.

With that said, the Texans have gotten some better looks at their recent draft classes. Jonathan Greenard seems to be looking like a steal in the 3rd round, and Ross Blacklock has shown flashes.

On the other hand, Lonnie Johnson at safety has disappointed (already benched twice) and Max Scharping hasn’t looked particularly sharp after moving from LG to RG. Charlie Heck has also looked a bit underwhelming at RT after the team decided to move Tytus Howard to LG (head scratcher).

How have the other rookies looked? Who would’ve thought Houston Texans 2021 6th round selection, Roy Lopez, would be the most impactful player?

But that seems to be the case heading into the Bye Week. Nico Collins has shown a few impressive catches but he has been trying to catch his stride after being sidelined with a shoulder injury.

Garrett Wallow has mainly been a special teams contributor. Brevin Jordan just started seeing playing time with Pharaoh Brown’s injury, and had a TD reception in his debut vs. the Rams.

It’s hard to gauge the success of this class without a 1st or 2nd round pick. Especially with only 9 games in the books, but there have been good signs if they got a defensive starter in Lopez.

Before we deep dive into what the future might hold for this team let’s get the negatives out of the way.

Some of the negatives are more glaring than others. Ownership and it’s decisions have been head scratchers to say the least.

What does that entail? Retaining Easterby and hiring David Culley as their head coach. Also Deshaun Watson legal problems, and the fact that he wants to leave.

That’s honestly a lot to breakdown, but there’s not much that can be done about ownership, it is what it is. However, hiring Culley always seemed like a short term move (he’s a first time HC at 65 year old).

Culley signed a 5 year deal, but he wasn’t going to be here for the long haul. If anything, the Texans parted ways with General manager Brian Gaine after only serving 1 year of his 5 year contract.

On the other hand, the Easterby narrative carries some merit, he plays a role in the Texans organization but he’s not the head honcho. That responsibility falls on Nick Caserio.

The Watson legal issues are worrisome and deserved to be taken seriously. It’s also unfortunate that he wants to leave, but it’s honestly not the worst idea after everything that has transpired. Both sides need a fresh start. However, Houston needs to get their fair market value for a young franchise QB. Now let’s get the to the meat and potatoes of this article.

The Texans suck and that’s ok. Only the true blindly optimistic at heart believed this team was going to win a lot of games. The ceiling of this team was always going to be 3-5 wins.

Even the loss against the Dolphins doesn’t hurt as much knowing the Texans have control of their draft picks moving forward. 9 games in, Houston is in contention for the 1st overall pick with a 1-8 record.

There are A LOT of options you can do with a top 3 pick. Draft a blue chip prospect, or trading back. Both are enticing options. Up to this point, there is no clear cut consensus QB that is generating buzz to be the next franchise QB.

So Houston could stay in the Top 3 range and draft a defensive player/elite tackle prospect or trade back a few slots. Possibly get a 1 or 2 future 1st for their troubles.

For the best and most recent example, Look at the Miami Dolphins in this past draft (Quit laughing, we’ll get to that later).

Houston is in prime position to get a great talent or accumulate premium draft picks in the next 2-3 drafts if they trade back with a team that is aggressive to trade up.

And like the paid commercial you watch on TV, wait there’s more!!

Houston has two premium talents that are worth keeping an eye on heading into the 2022 NFL Draft.

The first we all know and it’s the obvious one, Deshaun Watson. He’s likely a goner at this point so it’s no point for fans to fantasize of him returning in a Texans uniform anytime soon. If the legal issues don’t escalate, Houston can get a real solid offer for him in the offseason. 3 1st, combination of Day 2 Picks and/or players.

Houston would be in a great shape to rebuild if they trade back in the draft and trade Deshaun (We’re talking 4-5 future 1st).

That’s not to mention the next player, All-Pro LT Laremy Tunsil. Before fans start screeching at the notion of trading Tunsil, look at it this way.

Having 2 years of control for Tunsil is a net-positive for any contender that don't have access to a high pick to select an elite OT prospect.

Any OT needy team in the league would give up at least a 1st for a player of his caliber. Houston will not likely not be a contender in the next 2-3 years, so choosing to retain Tunsil would pretty much paying homage to the early 2010’s Browns with Joe Thomas at LT (It’s still too soon to crown Tunsil a Hall Of Famer but you get the picture).

I think we can all look fondly at what Tunsil did in his 1st two years with the Texans before things went south. And although he’s a professional and probably loves what the city of Houston has to offer, I’m sure he isn’t exactly loving to be in a losing situation every time he shows up to work.

If you told me, the Texans can break even trading Tunsil (recover 2 1st and a 2nd) or trade Tunsil, and recover a 1st. I’m all for it. Ending up paying a 1st and a 2nd is a better than letting Tunsil just hit free agency in 2024. Trade him right now that he’s healthy and continue the rebuild. 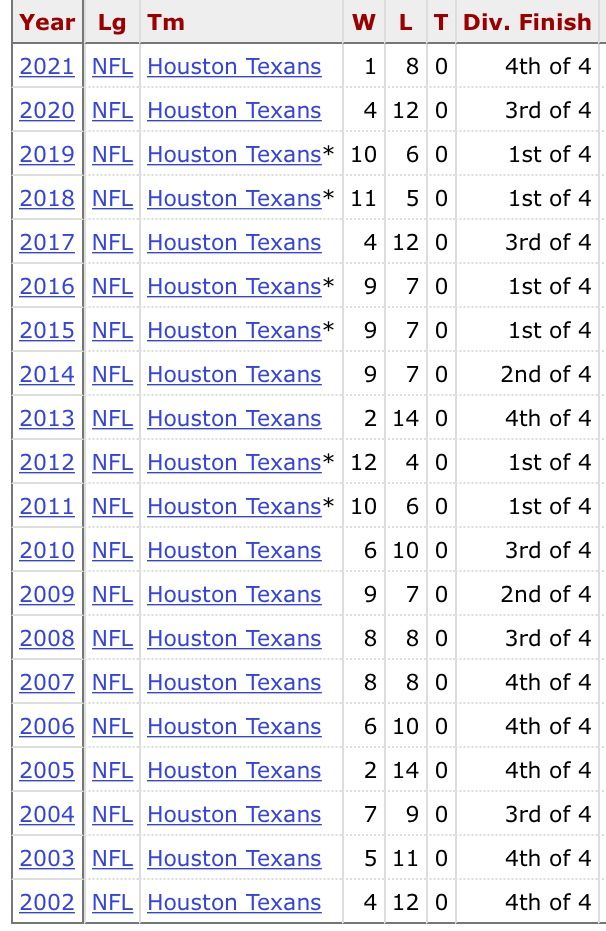 What have we learned about the Houston Texans?

The Texans will have back to back to losing seasons for the first time since the 05-06 seasons. That’s a long time. Yes, the Texans never made an AFC Championship appearance (Jaguars/Titans) and they never made it to a Super Bowl either.

What am I trying to say here? Texans aren't successful as the organization tried selling to the fanbase, but they also aren't nowhere near the poverty standard that many fans claim.

If it were up to me, I’d rather be an Eagles fan and experience that unexpected Super Bowl fun with Nick Foles in my lifetime and endure some losing seasons in the years to come.

Winning is fun, winning is sexy, but Texans have proven there’s more to happiness than just regular season success. With that said, Texans fans have been spoiled by winning the AFC South Division for the better part of the last decade.

Texans have 2 losing seasons and people are losing their minds. Yes, it pains me to watch the Texans every week. But it’s part of sports.

Similar to our own mortality, every winning team has their own expiration date. Nothing is built to last forever. It would've been nice to have won something before blowing it up, but Texans never got to see it completely through with Deshaun.

And both sides have plenty of blame for that. Outside of the fans, everyone had some sort of fault for how everything turned out.

With all that said, Houston is relatively in a good place moving forward. They will have plenty of premium picks to rebuild. This is no longer the 2020 season where fans had to watch the Texans crawl to a 4-12 record and have no Top 3 pick to show for it. 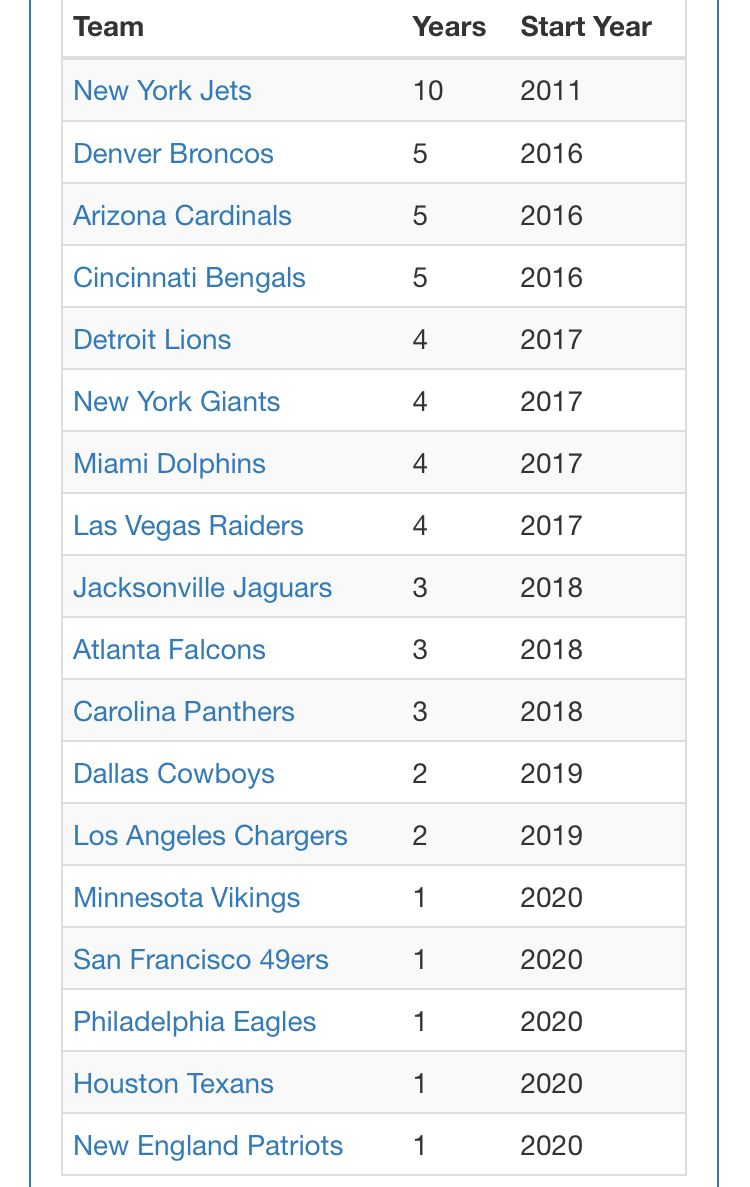 Watch College Football and put your scouting caps on

This is the 1st year in a rebuild where they pretty much have full control of their draft picks (traded 5th round pick for Anthony Miller). Despite the knocks of Caserio’s wheeling and dealing, Houston will still have 10 picks in 2022.

As much as a portion of Texans Twitter complained about the Bradley Roby trade, it definitely continues to be a smart move for the Texans.

Getting a 3rd for a soon to be 30 year old CB, who has never reached All-Pro or Pro Bowl consideration was a good get for Caserio. Taking on that extra money was a good compromise considering Roby was pretty much viewed as an early Day 3 pick, not a Day 2 in trade talks.

These are the type of moves the Texans will have to continue to make in a rebuild. Sort of like the stock market, you’ll hit a few small losses along the way but as long as you continue to winning in most trades.

It’s likelier you’ll have a winning product on game day. Houston is building up draft picks for the future. Caserio will just have to be more restrained making deals (giving up a 7th for Ka’Dar Hollman, 7th for Ryan Izzo, 5th for Anthony Miller).

Those trades weren't damaging to the Texans long term future but those trades can be avoided. Maybe Caserio saw those trades as good low risks to take but he could be smarter about it. And that’s something you learn from.

Caserio is far from the perfect GM and he has had mix results with the players he brought in, but nothing worth crucifying him over.

Houston will have a fair amount of draft picks, and have plenty of cap space to work with once Deshaun is traded. And that's not mentioning trading or waiving the upcoming contracts: Tunsil, Cunningham, Cannon, Fairbairn, Jenkins, Pierre-Louis and Murray.

To put it frankly, Houston could have an upwards of $100 Million in cap space simply by trading Watson, Tunsil, and Cunningham via OTC.