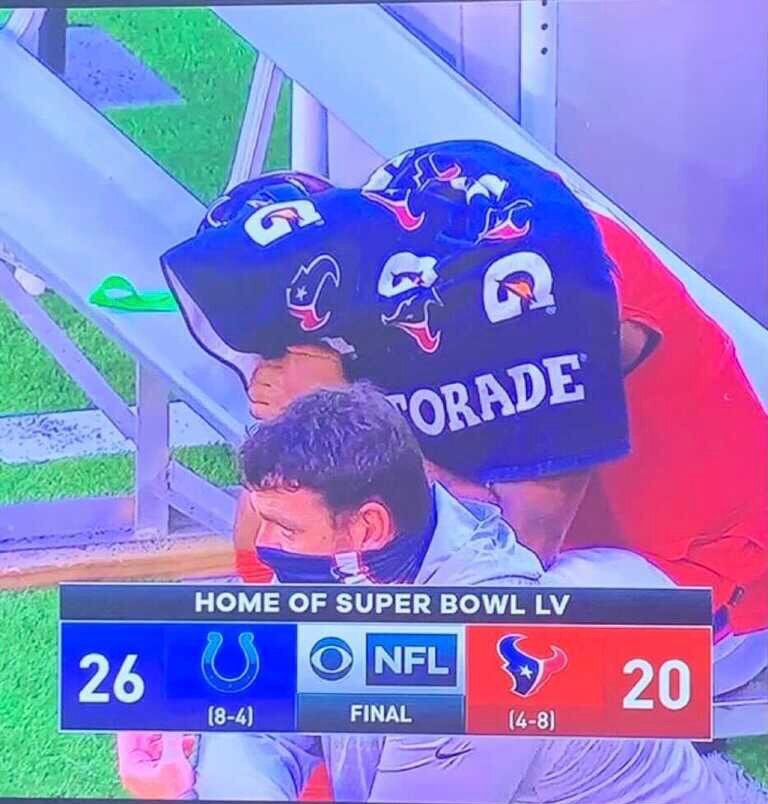 All Deshaun Watson Needs Now Is His "Phil Jackson"

After another disappointing loss this past Sunday to AFC South rival, the Indianapolis Colts, the Texans find themselves in unfamiliar territory since selecting Deshaun Watson.

Outside of Deshaun Watson's rookie season where he tore his ACL and missed the final 8 games of the 2017 season, the Texans had always been in playoff contention. Houston isn’t mathematically out of the playoff picture, but a win this past week would have drastically helped their cause.

You read all the articles about Deshaun Watson and how he has won at every level of his career before entering the NFL. His winning demeanor was overlooked in the 2017 NFL Draft as Deshaun was selected 12th overall. Undoubtedly, if we went back to that draft now, Watson would be have been picked in the top three of that draft. Patrick Mahomes and Myles Garrett deserve merit in that conversation, but Mitch Trubisky and Solomon Thomas being selected in the top three looks a lot worse nearly four years later.

Unfortunately for Watson, he didn’t enter the ideal scenario that Mahomes had in Kansas City. Watson didn’t sit his rookie year to reduce the learning curve; he didn’t inherit a top 5 Head Coach, a top 10 offensive line, stability in the front office, or a QB friendly scheme surrounded by Tyreek Hill, Travis Kelce, or Sammy Watkins.

Instead, he inherited an ego-driven HC, an offensive scheme where we have only seen one QB operate and succeed at a high level in Tom Brady, a coaching staff that lacked significant NFL coaching experience, a front office that has seen four general managers over the last four years (Rick Smith, Brian Gaine, Bill O’Brien, Jack Easterby), and roster turnover at the highest level. Losing Duane Brown, DeAndre Hopkins, Tyrann Mathieu, to list a few.

With that being said, we are seeing Deshaun Watson perform at an elite level, and playing his best football since entering the NFL. Here is his current stat line for the 2020 season:

5 Interceptions (Not counting the controversial INT from the Colts game)

These stats are incredible, but the film tells you even more. When watching Deshaun this year, you can see the growth from last season, and a lot of it has to do with DeAndre Hopkins' departure. Having an All-Pro star receiver can be great, but it can also impact your development as a QB. You can shorten your progressions, especially with a receiver like Hopkins; as, as you know the worst-case scenario, you can throw it up to him, and he has the ball skills to make a contested catch.

Deshaun is more comfortable this year and is spreading the ball around. He is making quicker decisions, and going through his reads much faster than years past. The most significant improvement I have seen from Deshaun is his anticipation. He is leading his receivers better than he ever has, and he is throwing them open too.

One of the biggest things about Deshaun Watson that I have always loved is how he is always looking downfield when scrambling, he isn’t a running QB, and nobody should ever classify him as one, because he is always looking to make a play with his arm, not his legs. Martin Marroquin from Toro Times wrote a fantastic article highlighting Deshaun Watson last week, and it takes a deeper dive into how excellent Watson has been in 2020.

Clemson HC, Dabo Swinney, said, “For [NFL teams], it's decision-making, it's who you pick. And I'm just telling you: They pass on Deshaun Watson, they're passing on Michael Jordan”.

That comment may have gone over people’s heads after seeing how Tajh Boyd fared in the NFL, but Swinney isn’t the only person to compare Deshaun Watson to Michael Jordan. Las Vegas Raiders HC, Jon Gruden, said, “He wills it out of his team. He makes something out of nothing! It's like going against Michael Jordan”.

Draftniks and NFL scouts may have scoffed at the comparison, which is understandable given Michael Jordan’s greatness. We have never seen a player like Mike, and the likelihood that Deshaun Watson can follow in his footsteps is hard to fathom for anyone watching the quarterbacks the Texans have trotted out over the years.

Maybe their take isn’t going to translate in the Texans winning six rings, but I think Jon and Dabo are 100% correct. The Texans have a Michael Jordan-like talent on their hands.

When you look at what Deshaun has accomplished while in the NFL, it is a spot-on comparison, not just because of his play but also with how his career has turned out so far and the adversity he has faced. Deshaun has made the playoffs two out of his four seasons in the NFL and hasn’t gotten past the semi-finals round (Divisional Round), does that sound familiar to you?

The Chicago Bulls drafted Michael Jordan in 1984; at that time, the league, media, and fans knew Michael Jordan was a unique special talent solely based on what they saw from him on the court, but Michael couldn’t do it alone. With Doug Collins as his coach, Jordan wasn’t able to get past the semifinal rounds in the NBA playoffs. So, in 1989 the Chicago Bulls fired Coach Doug Collins and hired Phil Jackson.

The culture changed that day; Phil knew what he had with Michael and added the pieces needed to succeed. Adding the pieces is one step, but it isn’t the most crucial step. That would be maximizing the talent on the roster and putting your players in a position to succeed, by knowing what they do best.

Deshaun will be entering the 2021 season with a new HC, and if his career trajectory is going to continue to be on par with Michael Jordan, Cal McNair, and the Houston Texans front office will need to hit on this next hire. Rivers McCown wrote a fantastic article about what he would look for in a HC, and it swayed my thinking on which side of the ball I would lean towards when hiring one.

After Bill O’Brien was dismissed this season, my initial thought was to hire a defensive-minded HC given the holes on defense, and the fact I believe Deshaun will thrive no matter the HC. That changed for me last week; I want a HC who is going to maximize the talent of Deshaun Watson as he isn’t even close to hitting his ceiling. The Texans need to look for a HC that understands who Deshaun is as a QB, player, and person. They need to lay out their vision for the team on both sides of the ball as they impact how Deshaun can thrive.

They also need to understand they have a player that cares more than anybody else in that locker room and gives you the ability to establish a winning culture quickly. When your leader cares how Deshaun Watson does, it makes setting that culture a lot easier; it becomes infectious and spreads throughout the organization.

However, culture also needs to spawn from the top of the organization, enact the change required to become a true winning organization. The Texans need a HC that can evolve and build an organization, offense, and defense, not just one of the three. You can’t hire a HC that is looking to replicate previous success at their former team because you are doing a disservice to Deshaun at that point. He isn’t just any other QB; he is Deshaun Watson.

Furthermore, the Texans HC search committee would be wise to analyze what qualities made Phil Jackson such a successful head coach. While Phil had the X’s and O’s down, he was more than just a “basketball” coach. He was a leader who instilled a system of accountability, discipline, and hard work. He was an innovator who was willing to flirt with toe the line of crazy if it meant winning.

He was a catalyst who knew how to empower his players, have them buy into whatever he was selling, and play their asses off. He was the epitome of winning, and that success garnered a reputation where players wanted to play for him.

It is still too early to have an idea of the head coaching candidates with four games remaining, but I have my inclinations (nothing that is set in stone ). We don’t have a clear idea of what the Texans are looking for after replicating the Patriot Way. However, I hope that the McNair ownership casts a large net and doesn’t just settle for “their guy” but settles for the right guy.

When you're hiring employees, you have to be diligent and do the proper research. You can’t be desperate and hire someone just to fill a void, or you will be in the same position you were before that hire.

Whoever Houston hires, they need to understand the golden opportunity they have on their hands, and they can be the “Phil Jackson” for Deshaun Watson. Hopefully, the Texans organization understands that as well, or we will eventually lose Deshaun Watson as he will not tolerate losing much longer.