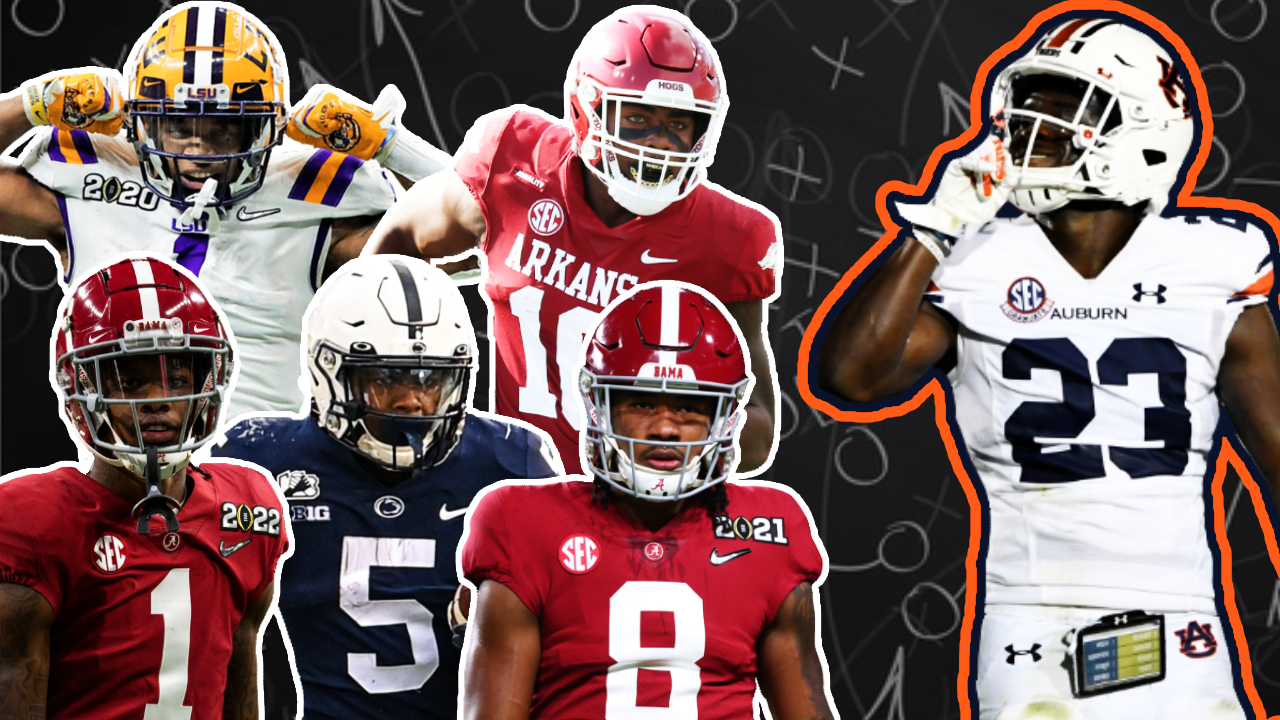 It's not the size of the boat it's the motion of the ocean.

Roger McCreary is one of the most talented cornerbacks in the 2022 NFL Draft and yet he is going to be eliminated from some NFL teams' draft boards because of his 29 1/4" long arms.

Much of the buzz surrounding McCreary's stock has revolved around that one measurement but it does not tell his full story. He's displayed the work ethic, production and on-field traits that make him worthy of a first-round pick.

McCreary was a three-star recruit who originally played safety before moving to corner for Auburn. He improved every year, raising his tackle numbers and ball production; culminating in a 2021 season where he led the SEC in pass-breakups with 14.

McCreary is extremely battle tested, competing against the top receivers in the nation, making him NFL-ready. He's sharpened his iron against Ja'Marr Chase in 2019, DeVonta Smith in 2020 and John Metchie III, Jameson Williams and Jahan Dotson in 2021 - among more.

When McCreary appeared on CBS' "Pick Six Podcast" he explained how he uses film study to perform against a gauntlet of receivers who each have different skillsets, "That's one thing that I love so much about the SEC is that you get to play against all different types of wide receivers. I went against short, quick guys. Tall, big guys. An example, [Arkansas'] Treylon Burks, that is a big overall guy that runs with speed. Coming from Jameson Williams with speed. [Penn State's] Jahan Dotson has great hands and can jump up and get the ball with Ja'Marr Chase."

Roger McCreary (Auburn CB) vs. Ja’Marr Chase (LSU WR) was one of the best battles of the 2019 college season.

Chase won his fair share of reps (as expected), but McCreary more than held his own against the Biletnikoff award winner. pic.twitter.com/eSp5xO5Rjw

"Going against all of those guys, I learned that l I couldn't play them all the same. I had to play with difference techniques and stuff. I feel like they just made me smarter for the game and figuring out their weaknesses and learning the play before it happened. Going against those great guys, even when I had bad plays, I feel like I can look back and figure out where I messed up at. That just makes me want to study more and become even better as a player and that will help me for the next level."

McCreary's 2021 matchups with Metchie III, Williams and Dotson will be the focus of this film study. This is because it is his most-recent film and it highlights McCreary's best usage in the NFL. With his long speed, reactionary quickness and calculated physicality, McCreary can follow speedy and route-nuanced receivers in man coverage from the boundary to the slot.

First, let's look at the context behind this intriguing matchup between these SEC talents. Metchie III is a late-first round talent who likely falls into the second round due to his unfortunate season-ending torn ACL. He's a twitchy athlete with veteran route salesmanship, making him a tough cover one-on-one.

In 2021, Metchie III played in 13 games, totalling 96 catches for 1,142 yards and eight touchdowns. Furthermore, he averaged 87.8 yards/game and vs McCreary and Auburn's defense he went for 13 catches and 150 yards.

Simply looking at the box score would make it seem like McCreary got toasted by Metchie III but that would be false. By tracking every rep the two matched up together, the reality is revealed - McCreary limited Metchie III severely and majority of his production came versus other Auburn defenders. 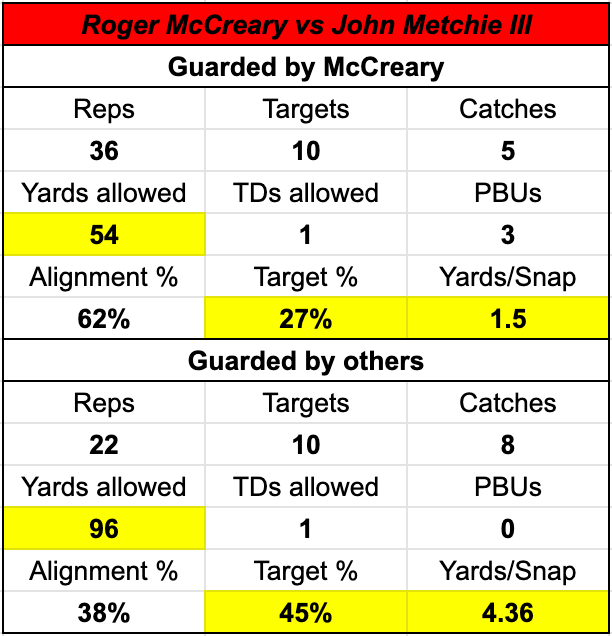 McCreary had quite the task, travelling to and from Metchie III and his teammate Williams, but he more than held his own. McCreary was able to mirror a variety of nuanced routes that Metchie III attempted and was so sticky in coverage that his short arms didn't matter - to the tune of three pass breakups.

It's evident by the numbers and the film that McCreary was not only Auburn's best answer for Metchie III but if he followed him the entire game instead of taking some reps vs Williams, Metchie III might've had his worst game of the season.

To be fair, Metchie III did beat McCreary bad when it mattered the most. He ran a picture-perfect whip route on the goal line, leaving McCreary in the dust to win the game.

Moving on, vs Alabama, McCreary was originally tasked with slowing down the speed demon Williams, before he left the game with a leg injury. Williams was earning deserved top-10 hype by the end of the season but may fall to the end of the first round or even the second round as he also tore his ACL.

In 2021, Williams played in 15 games, totalling 79 catches for 1,572 yards and 15 touchdowns. There have not been many - if any - corners who have been able to keep up with Williams but McCreary certainly won their battle. Williams averaged 104.8 yards/game on the season but only managed 43 vs Auburn (albeit he left the game early with a leg injury). 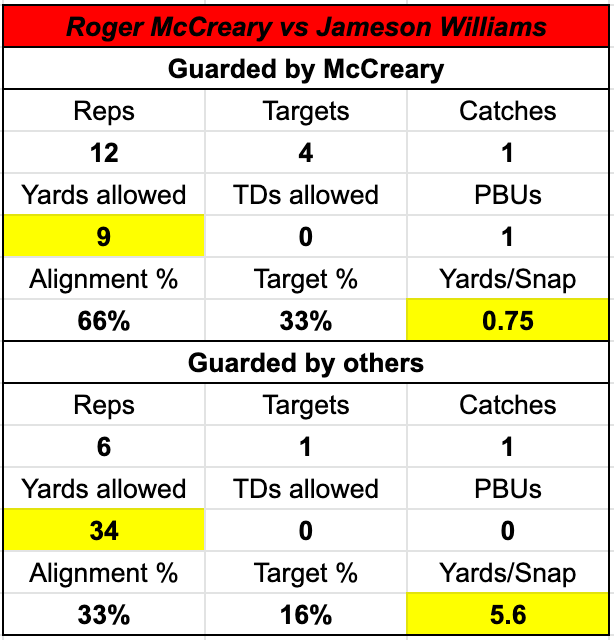 McCreary often followed Williams into the slot, where Williams was at a clear advantage as he had two-way go's all day. Despite that fact, McCreary never let Williams get loose for a big play.

Arriving at the final matchup of this article, Penn State's Dotson is one of the most underrated receivers this year because of the poor quarterback play which limited his production. 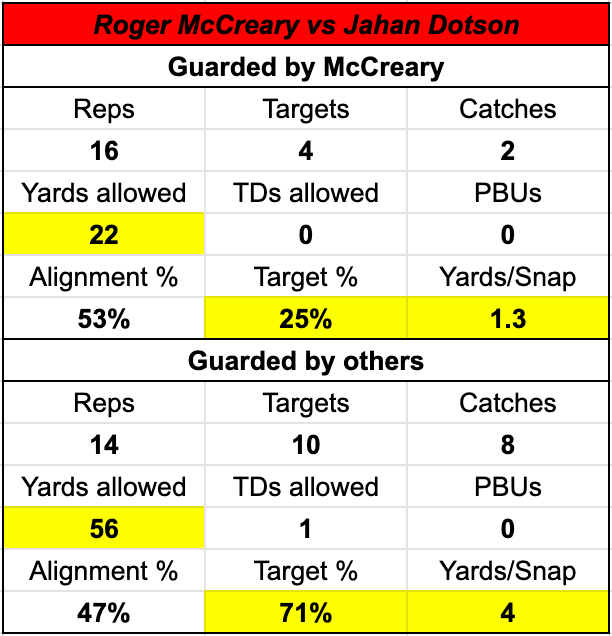 McCreary had one of the best games of any cornerback in recent history as he virtually erased Dotson from the game, when matched up together. He really excelled in man coverage - press or off - where McCreary showcased impressive foot speed which made Dotson look slower than he actually is.

Yet again, a very talented receiver had majority of their production versus non-McCreary defenders and struggled to separate vs McCreary himself. Dotson, like Williams and Metchie III looked like shells of themselves versus McCreary.

The Auburn corner has been ran through the gauntlet, facing numerous first and second-round receivers and coming up on top time and time again. He's performed better against future NFL receivers than Derek Stingley did in 2019 - who lost numerous reps vs Devonta Smith and Van Jefferson.

Furthermore, Ahmad "Sauce" Gardner and Andrew Booth Jr., the other consensus top-three corners have not faced the same quantity and quality of receivers as McCreary has.

Press-man corners who can follow the opposing team's best weapon all around the field are at a premium. It's a damn shame that many NFL teams will pass on McCreary because of his short arms and overlook his CB1 worthy resume. He is a first round talent that may be available to the Houston Texans at the top of the second, where they should forego scheme fit worries and simply add the talented McCreary.