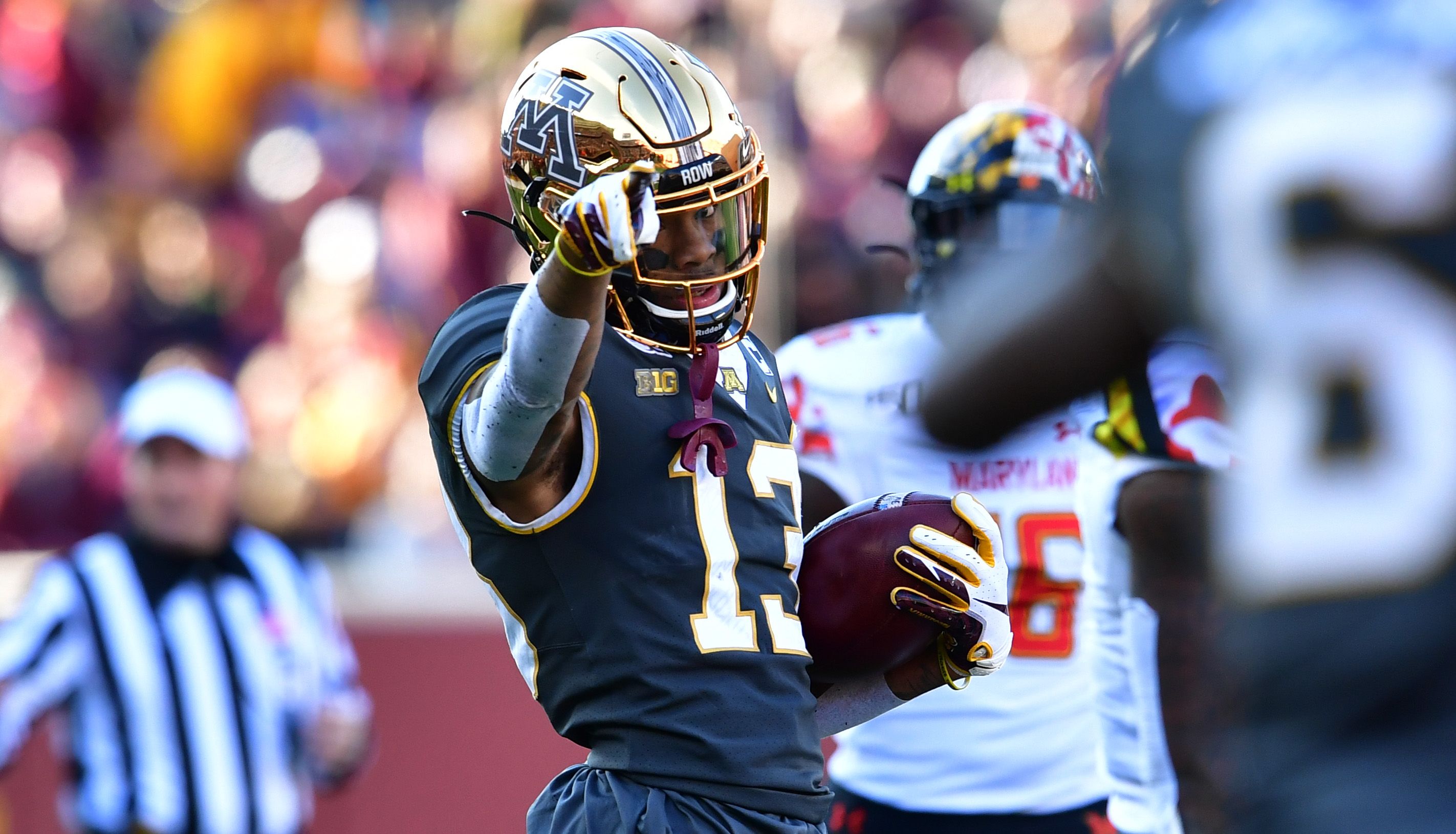 Rashod Bateman was, simply put, the best wide receiver in the Big Ten last season. In a conference that included Rondale Moore, KJ Hamler, and Chris Olave, among others, that is certainly an impressive achievement and should give you an idea of just how good Bateman actually is.

He didn’t really get much national media attention due to the fact that he does go to Minnesota, but he is definitely someone that all of you should be familiar with. He is one of the early favorites to be the best wide receiver in the nation next season and win the Fred Biletnikoff Award which would recognize him as such. As Minnesota gets better, Bateman will receive more attention and it would shock me if he ended up in the first round next April. He has all the talent in the world and I cannot wait to give him the attention and praise he deserves in this article.

Rashod Bateman was a four-star recruit coming out of Tift County High School in Tifton, Georgia, and was one of PJ Fleck’s prized recruits in his first full recruiting class as the head coach of Minnesota. Bateman made an immediate impact as a true freshman, playing in all 13 games and recording 704 yards and 6 touchdowns before making a giant leap in his sophomore year. He only had 9 more catches but the stats were exceedingly better, logging 1,219 yards and 11 touchdowns. Those stats earned him First-Team All American honors and the Richter-Howard Receiver of the Year award which recognizes the best wide receiver in the Big Ten. Bateman was a part of one of the better wide receiver corps in the nation with his teammates being Tyler Johnson, a 4th round pick in the 2020 NFL Draft, and Chris Autman-Bell being one of the best returning players in the Big Ten, along with Bateman of course.

The Texans just lost an All-Pro in Deandre Hopkins and Will Fuller’s injury history is well documented, along with the fact that he is out of contract after the 2020 season. Rashod Bateman offers a little bit of both of what those receivers offer. He has the deep threat ability that Fuller possesses and the route running and hands that Hopkins possesses. I think he is a complete receiver that would fit almost any team, but especially the Texans. Deshaun Watson is one of, if not the best, deep ball quarterbacks in the league. I mentioned earlier how Bateman has deep threat ability, the quarterback just didn’t find him most of the time, Watson would be able to find him and make him more of a threat than he already is. Bateman’s 20.3 yards per reception shows that Bateman is exactly the type of receiver Bill O’Brien wants in this offense, the fact that he is a more complete receiver than Will Fuller, Brandin Cooks, or Kenny Stills is just an added bonus. If the Texans can find out a way to land Bateman, it would make the offense more electric than it already is.

Rashod Bateman is a wide receiver that is still developing, and considering that he was the best receiver in his conference last season, what bodes well for the potential that he possesses. All of his flaws are either fixable or really not that worrying, and his strengths are so great that they outweigh any weaknesses. Rashod Bateman simply knows how to get open, and with better QB play, would have had a lot more yardage than he ended last season with. That is the scary thing about him when you watch his film, there are countless times where he burned a corner and the quarterback just could not get it to him. You pair that with the fact that he was just a sophomore last season, it is hard not to get excited about what Bateman can do in the future. He is an electric wide receiver that is not just a one trick pony, those do not come around often. I believe I have seen all I need to comfortably say that Rashod Bateman will go in the first round of the 2021 NFL Draft.

I am now going to show you some of Rashod Bateman's best catches so you can get an idea of what kind of receiver he is. I am only going to show three plays in the article, but I do have a thread that will be published along with this piece on my Twitter account, @Texans_Draft. I will be showing a lot more of Rashod Bateman in that thread so please make sure to check that out. Now, let me show you a some of the electric plays that Rashod Bateman made this past season.

In this first play you can see how smooth of a route runner Bateman is. He gets a fast release off the snap and sells the fake so well that he has the corner going the complete opposite way by the time he catches the ball. The double move was so smooth, and the subtle head dip on the cut to the outside is what really sells it and gets the corner to completely bite on it. He also shows great body control to reel in a slightly misplaced ball and actually gets both feet in bounds while securing the ball with his plus hands.

This sequence shows you the speed and open field ability that Bateman possesses. This is a play design that I wished Bateman was utilized more in considering that he is so dangerous in the open field with this speed and elusiveness. You can also see the acceleration once he gets the ball in his hands to take several defenders out of the play and that is what almost gets him the touchdown. His crisp cuts are also on display once again as he uses one to get some extra yardage and get close to scoring.

Here we can see his deep threat potential and just how dangerous he is running vertically. I really like this play design as it appears that Bateman is setting up to block for a run play, but as soon as he sees the defenders sleeping, he accelerates at an elite level and simply no one is catching him when he is at his top speed. I would love to seem him utilized like this more in the 2020 season. I realize that he has super smooth routes and is almost always open, so that is very helpful for the QB, but his deep threat potential is just too great to ignore. Nevertheless, Bateman is a complete receiver that should be a first round pick next year if he continues to perform at this high level.