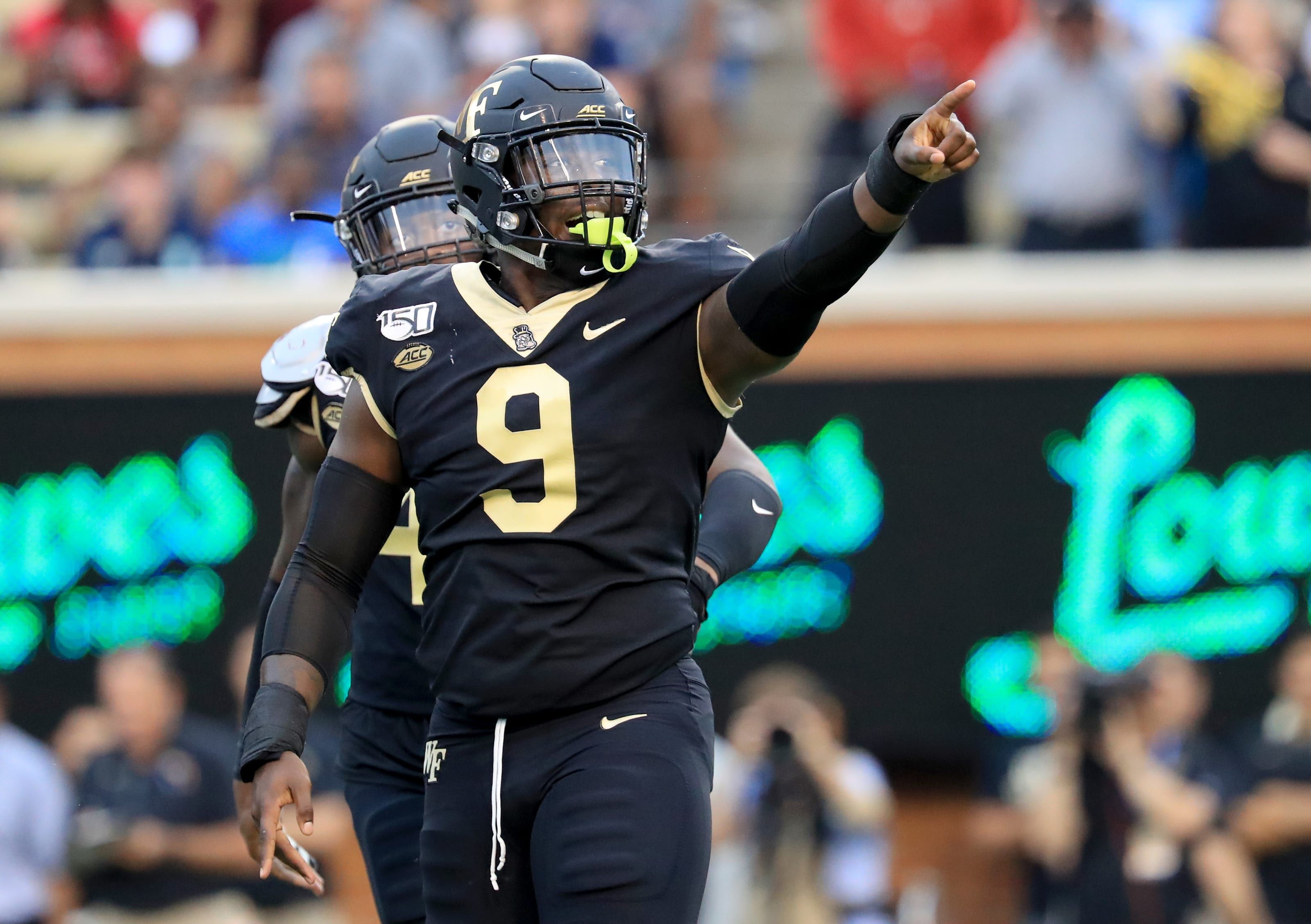 For the second year in a row, the edge rusher group in the NFL Draft is not great, but there are still guys worth checking out and one of those guys is Carlos Basham. His combination of size, speed, and agility make him an intriguing prospect for NFL teams to get acquainted with as the season progresses in 2020.

He is a player that you can see absolutely testing off the charts at the NFL Combine and really improving his stock in that regard. He played on a defense last season that has several NFL guys, and he was the one that stood out throughout all the film review of those other prospects. His instincts and play strength are what make him a special prospect coming out of Wake Forest. I have seen several articles that have Basham ranked as a top three edge rusher in next year’s class at the very least. There is certainly a lot to talk about when it comes to Carlos Basham so let’s dive in deeper on this edge prospect.

Carlos Basham was a three-star recruit coming out of Northside High School in Roanoke, Virginia. He wasn’t very highly touted or recruited as he only receiver four Division I offers, with three of them being from lower tier ACC teams. He eventually decided on Wake Forest where he redshirted his first year as a Demon Deacon. After that, he became a mainstay on that defensive line, playing in 36 games across his three seasons of action. With each season, came a jump in production, Basham was constantly improving his game. He went from 0 sacks and 2 tackles for loss in his redshirt freshman year all the way to 10 sacks and 18 tackles for loss this past season. Those stats in the 2019 season earned him First Team All-ACC honors and is now listed as a preseason First Team All-American for the upcoming 2020 season. Basham could have entered the draft this past year and many analysts think he would have been a top 50 pick. However, with another season for him to improve, as the trend of his development suggests, he is looked at as a player that could possibly sneak into the top 10 or 15 selections come late April in 2021.

While the Texans did address their pass rush admirably this offseason, it is still a position group that has a lot of question marks going into the 2020 season. Whitney Mercilus and JJ Watt could both be nearing the end of their time in Houston due to the large money they command and the need to pay the younger guys on the defense. If they end up departing the Texans in the near future, adding a pure pass rusher like Basham would benefit this group greatly. He would fit the Whitney Mercilus role perfectly while Jonathan Greenard takes to duties of the pass rushing/coverage hybrid outside linebacker. I know what you're all thinking, don’t the Texans already have a pure pass rusher that doesn’t help out in the run game in Jacob Martin? That would be correct, but Martin is largely not a factor in the run game due to his size. Carlos Basham has about 30 pounds on Martin and can be a true three down pass rusher with some coaching up on how to fill holes and be a factor in that department. Also, Basham is truly a positionless pass rusher, he has the frame and the skills to play all across the defensive line, he could fill in admirably for almost anyone that leaves the Texans, adding a pure pass rusher such as him is never a bad idea.

Carlos Basham is not a player without holes in his game. In fact, there are many holes that you can point out and critique without hearing any arguments from me. However, the one thing he excels at is on such a high level that I am willing to excuse all his shortcomings and hope that coaching can fix the run support and containment issues. No matter what, though, he is a player that you want in the game on passing downs, because more often than not he will disrupt the quarterback one way or another, it’s in his DNA to be a pass rusher and be a very good one at that. The variety of ways to win, the production, the hand usage, and the versatility all across the defensive line, it all adds up to him being an elite pass rusher that you would rather have on your team than have to gameplan for him on the opposing side. I believe strongly that Carlos Basham will be a great pass rusher at the next level, I just hope he cleans up some of the flaws he possesses in the 2020 season.

I am now going to show you some of Carlos Basham's film so you can all see how high level of a pass rusher he is. I am only going to show three plays in the article, but I do have a thread that will be published along with this piece on my Twitter account, @Texans_Draft. I will be showing a lot more of Carlos Basham in that thread so please make sure to check that out. Now, let me show you a few of the sacks that Basham produced this past season.

In this first play you can see the super fast get off and burst off the line of scrimmage. It almost looks like he shot out of a cannon with how fast he got to the quarterback. The lineman blocking him simply had no chance with Basham's speed and the subtle swipe at the bottom of the move. That swipe does just enough to distract and put off the blocker so Basham can have an easy and unimpeded path to the quarterback. Once he gets there, the pursuit is relentless and he causes an incompletion on a big third down.

The hand usage and play strength is more prevalent in this next sack that Carlos Basham produces. He doesn't really have a super fast or clean get off in this one, but he makes up for it with his hands and stills ends up getting the sack. He simply bullies the offensive lineman with his super strong and elite hands, pushing him out of the way and getting off the block. He shows decent instincts here as well, noticing that the quarterback stepped up in the pocket and adjusting his body accordingly to make sure he does not let him slip away and into the open field.

This last play showcases Carlos Basham at his absolute best. It displays pretty much everything you want in a pass rusher and why he is such a good one. He gets off of the line of scrimmage super quickly and when met at the point of attack uses a violent swipe move to put away the offensive lineman and creates a clear path to the quarterback with ease. When he reaches the QB, he attacks the football and forces a fumble late in the fourth quarter. To have a pass rusher that can wreck a games and perform in such a big situation is super valuable to a defense and your team overall. It just goes to back up my point, Carlos Basham is a player you want on your football team.