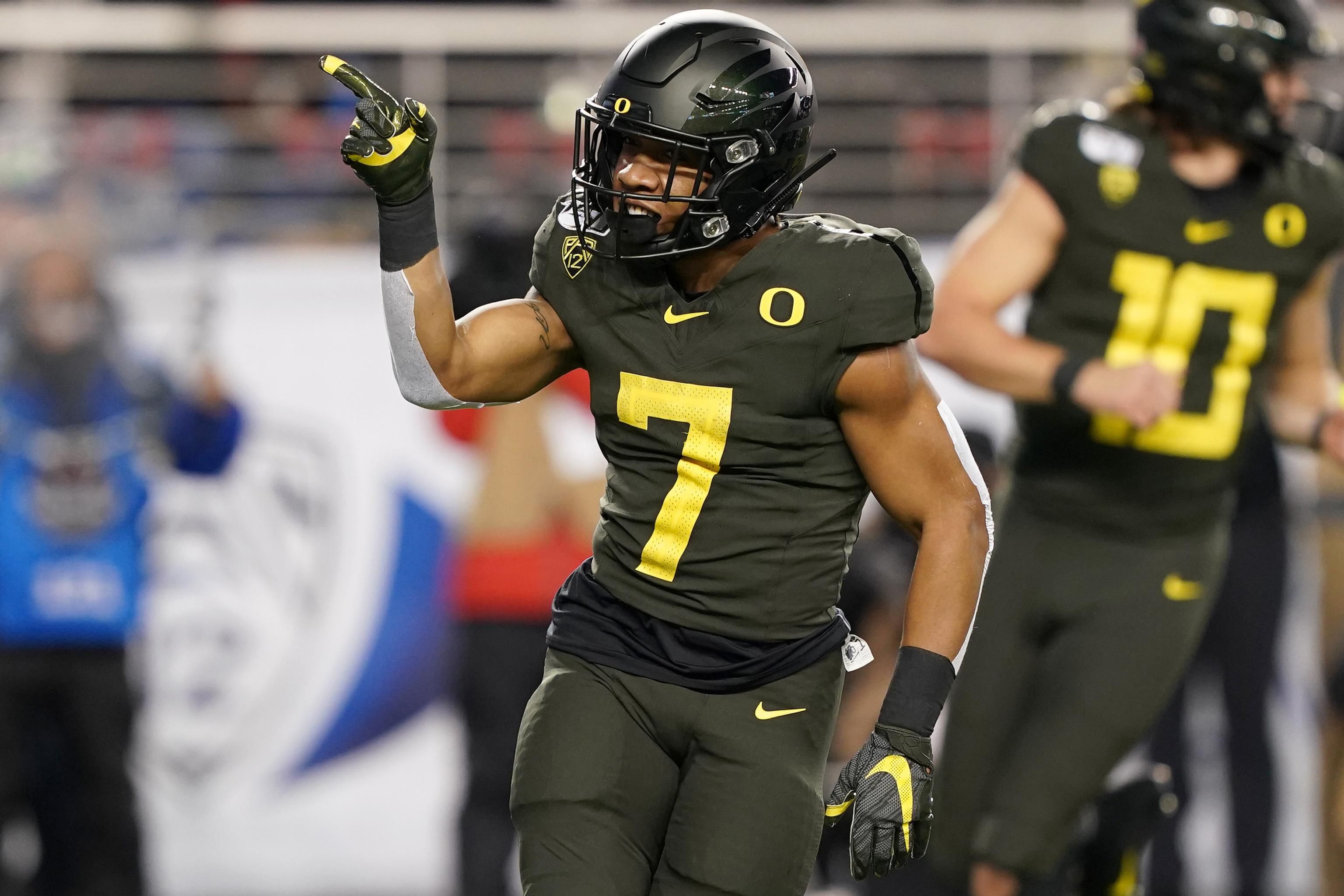 Much like Andre Cisco, I sort of stumbled upon CJ Verdell and his abilities on the football field. Before he even enrolled in college, I knew about Verdell because my beloved Nebraska Cornhuskers were in his final three schools. When he didn’t end up picking Nebraska, he kind of fell off my radar until the 2020 draft process.

During that process, I watched a ton of Utah film due to their absolutely stacked defense that included Julian Blackmon, Terrell Burgess, and Leki Fotu, among others. One of the more popular Utah games was the Pac-12 championship game against Oregon and CJ Verdell absolutely lit the Utes up for 208 Yards and 3 touchdowns as the Ducks blew out the Utes 37-15. That is when Verdell jumped on my radar and I have been impressed by him ever since. He might be slightly undersized, but when I watched his film, I saw an uber talented and athletic running back that has all the tools to succeed in the NFL and I cannot wait to shine a little light on those skills in this draft profile.

CJ Verdell was born right outside of San Diego in Chula Vista, California, where he attended Mater Dei Catholic High School and was a three star recruit coming out of there. Verdell decided to redshirt his first season with the Ducks, but after that, he took the starting running back role and ran with it. He posted back to back 1,000 yard seasons in his two years as the Ducks’ feature back. On top of that, he has recorded 18 career touchdowns on the ground, while tacking on 2 more in the passing game, bringing his total to 20 career scores. Verdell also posted a very impressive 6.2 yards per carry which ranked 16th among all rushers in the FBS. Verdell’s 1,345 yards from scrimmage ranked 4th in the Pac-12 and even earned him Second Team All-Pac 12 honors in 2019. Lastly, As a testament to his value, Oregon is 7-1 when Verdell rushes for over 100 yards, something that certainly should carry weight in today’s NFL that devalues running backs for their lack of wins above replacement.

I believe that there is a high chance that the Texans need a running back going into the 2021 NFL season. David Johnson is on the last year of his deal and with all the players the Texans have to pay on defense, they may not be able to afford. Verdell would fill a need that the Texans may still have when David Johnson is on the roster, a running back that can work between the tackles and get those hard yards on first down. Of course, Verdell might be a little undersized for that role, but he has definitely shown the ability to put his head down and run stronger than his size may suggest. To take it a step further, he is not a one trick pony like most backs are who fill that role, he has the ability to bounce it outside and accelerate at an elite level to gain yards that way. He also has some potential in the passing game due to his shiftiness in the open field, he just needs to get more comfortable with running routes out of the backfield. Finally, with the way Verdell sniffs out gaps and bursts through them, he would fit like a glove in our zone blocking scheme that made Carlos Hyde so successful.

CJ Verdell is a running back that can do a little bit of everything, with some clear things that he needs to work on heading into the 2020 season. He has the speed and short area quickness to succeed in any NFL offense, but to truly be a valuable back at the next level, he has to at least become serviceable in the passing game. That is something that I will certainly be looking for in Verdell when I watch him this season. Of course, in the Texans case, this should not deter them away from him considering they have one of the best pass catching backs in the league in Duke Johnson to fill that role. Instead, they should look at CJ Verdell and see a stout and solid runner that has a rare combination of power and speed to excel at the next level. When used right, Verdell is as solid of a back as they come and I cannot wait for him to light up NFL defenses in the near future.

I am now going to show you some of CJ Verdell’s film so I can highlight some of his strengths that I mentioned earlier. I am only going to show three plays in the article, but I do have a thread that will be published along with this piece on my Twitter account, @Texans_Draft. I will be showing a lot more of CJ Verdell in that thread so please make sure to check that out. Now, let me show you a few of the runs that Verdell produced this past season.

This first run is a very special one. You can see a few of the things I mentioned in the strengths section earlier in this play. Firstly, it is a designed run to the right, Verdell does a great job at getting skinny to get by two would-be tacklers, showing some of the power ability that I alluded to earlier. When bursting through that hole, the contact slows him down a bit but then you get to see the acceleration that makes him such a special back. He gets to the edge with ease because he is simply faster than everyone else on the field. He finishes the run nicely, gaining a couple extra yards with the stiff arm along with the shiftiness he puts on the tackler.

This next play displays Verdell’s ability between the tackles and his potential as a power back to get you the hard yards you may need on first down to jumpstart your drive. He does a great job of being patient and waiting for his hole to open up and when it does he hits it with great purpose and strength. Once he turns upfield, he breaks a couple of tackles and churns his feet when he is wrapped up to gain a couple extra yards. The way he finishes this run is really promising and shows how he runs stronger than his size, he really carries two tacklers to ensure he picks up the first down, this was a great piece of running.

This last play really highlights all of CJ Verdell’s strengths in one play. He is at his best bouncing it outside so he can get in the open field and accelerate, he does that marvelously here. The way he gets in the open field is through the recognition of the hole that his pull blockers created for him, hitting it quickly and bursting through like he was shot out a cannon. He is then collapsed on quickly by the secondary which gives him a chance to show off his power running game. He bounces right off a tackle that knocks him off balance and gains probably five yards after contact falling down because he has such great balance that he is able to stretch the play out. This was the run that depicts CJ Verdell in his most complete form.