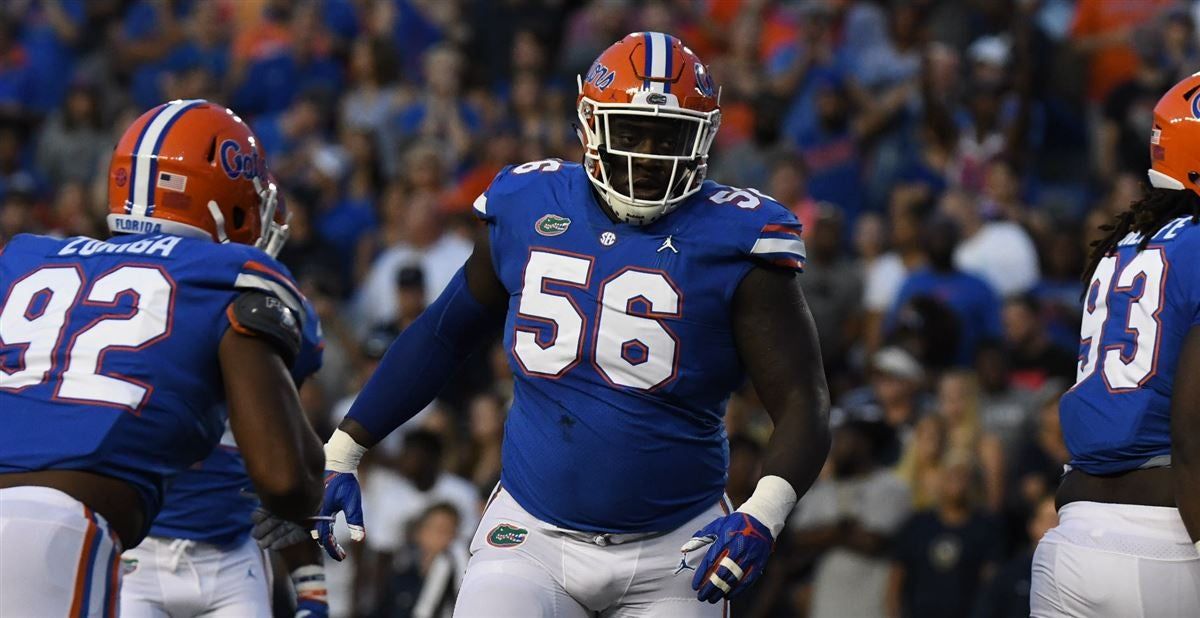 Tedarrell aligns at defensive tackle for the Florida Gators. #56 on the field, he's listed at a hulking 6'5, 358lbs and is a Senior.

- Mountain of a man with ridiculous measurements, but isn't just a statue

- Shows great burst off the snap at times, combining that with his powerful hands and he's a menace

- Collapses pocket with powerful bull rushes, when given a 1-on-1 with the Center

- Shows some good agility for a guy his size, and pairs that with rip and chop moves to get to the QB

- Will destroy 1-on-1 blocks in the run game, you just aren't going to out-muscle him

- Long arms regularly strike OL in the chest, and he usually plays with good pad level

Good burst off the snap here by Slaton (#56) and not only does he push back the RG, but that stalls the pulling LG. He completely blows up this play from the beginning and has some ability to shoot gaps as a 1-tech, which is so impactful.

His natural power translates to the passing game as well, where he can collapse the pocket when given a 1-on-1 block. Once he extends his arms and runs his feet, the IOL gets taken for a ride.

I was pleasantly surprised by how advanced of a pass rusher he is, for a NT. Uses a two-hand swipe move going to his right, then a rip move to finish off the Left Guard. Getting interior pressure on a QB is of the utmost importance. Slaton is super disruptive in this sense.

Nice chop move vs Alabama Center Landon Dickerson, a hell of a player in his own right. The two had a battle all day long and Slaton is the only DT I've seen give Landon some struggles. That should speak volumes.

- Particularly with double teams, he relies on brute strength over technique

- He gets pushed back too often and gets his body turned, rather than stay square

- Occasional reps where he looks disinterested when pass rushing

Gets blown off the ball here and the RG angles him so that the RT has an easier job to do. Good blocking by Bama, but Slaton needs to be better here. I'm confident with some good coaching, he could be a stud in the run game though.

The Draft Network: Fifth Round

Slaton is exactly what we need - a big body NT. While he needs work on defending the run from a technical aspect, that isn't a relatively hard fix. You cannot teach his natural athleticism, power and size that will have any defensive line coach drooling. It's rare to find a NT with his pass rush ability and that's most definitely worth taking a shot on in the mid-late fourth, where we are flush with draft picks.