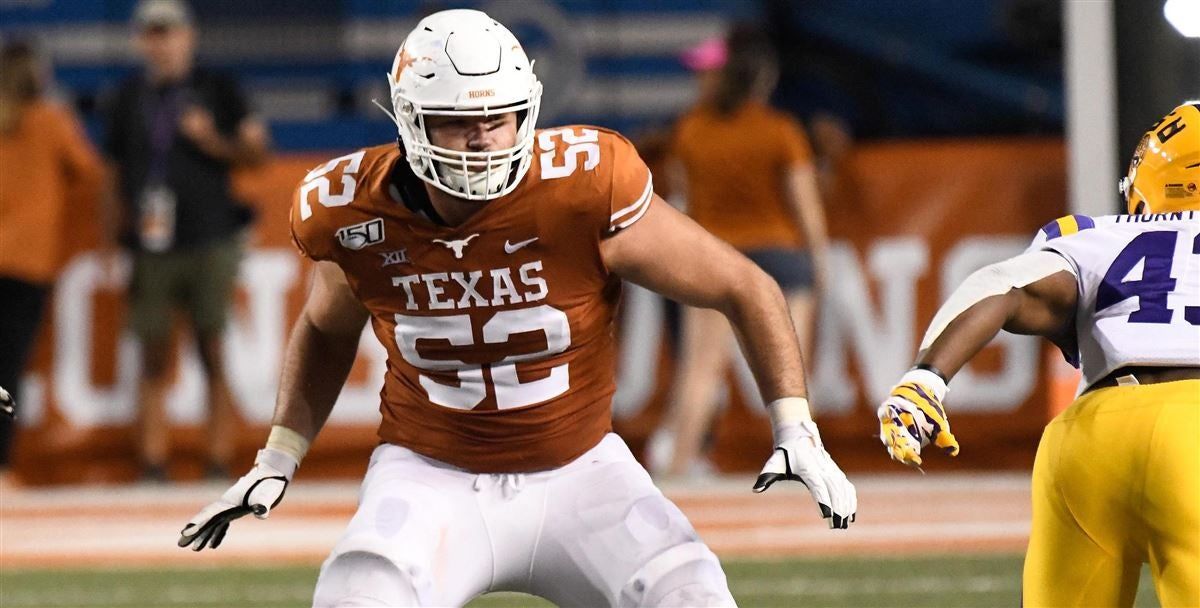 Samuel aligns at Left Tackle for the Texas Longhorns but many experts project he moves to Guard at the NFL level. #52 on the field, he's listed at 6'7, 309 lbs and is a Junior.

- Great movement skills, laterally and vertically, especially at his height

- Inconsistent, but occasionally shows some nasty when blocking

Cosmi (#52, Left Tackle) doesn't have the quickest kick step here, but he shows a mean streak. Pancaking the edge rusher. He slaps and sort of hugs the EDGE with his hands, controlling any movements and putting him in the dirt when he tries to spin.

- Not someone who is going to move defenders out of their gap, when 1-on-1

- Doesn't play with good pad level, thus lacks power. This worry will be enhanced if he moves to guard

- Regularly fails to sustain his block for longer than a second

- Looks to "catch" rather than strike, in pass pro. Coached that way though, and a different technique would suit him better in my opinion

Slow to punch and react. Allows defender to get into his chest and doesn't re-anchor to give up ground slowly. Hands don't extend out, but rather compress into his body.

Cosmi has a decent initial strike vs the EDGE here, but doesn't sustain the block. Grab hold of that jersey, drive your feet and FINISH! I got so frustrated watching him block like this, reminds me of some Texans linemen...

The Draft Network: First Round

Cosmi is an interesting prospect because although experts project him to move to guard, he doesn't have inspiring guard traits. At 6'7, he needs to play with lower pad level, to create push on the interior. He doesn't consistently block with that physicality which is necessary from a guard. I think he is fine with sticking at tackle, and since that isn't a position of need for the Texans, I wouldn't be in favor of drafting him at all. If he's there in the 5th or 6th round, maybe take a shot, because of his ceiling. He could end up being a solid swing tackle for us.