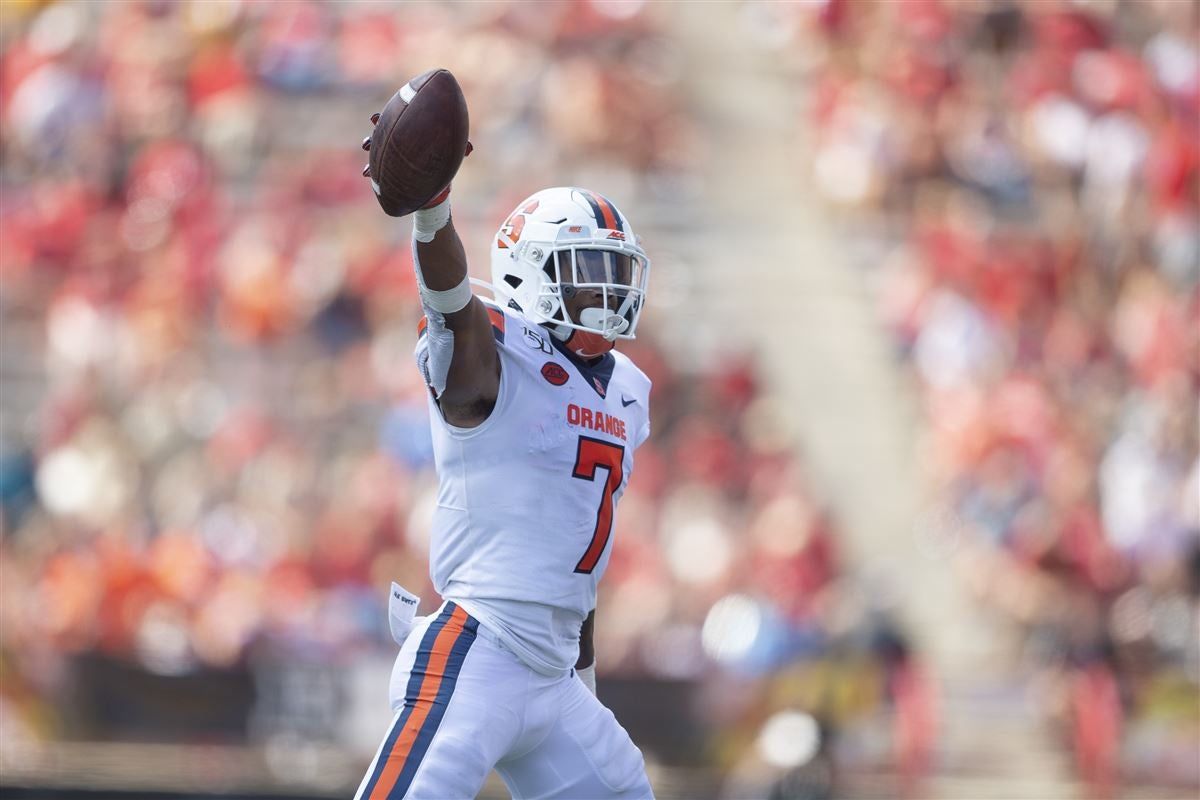 Andre Cisco is a player that I have admired for a while. During the 2020 NFL Draft process, I watched my fair share of Syracuse film due to the fact they had two of my favorite edge rushers in the draft at the time in Alton Robinson and Kendall Coleman.

Neither of those players ended up in Houston, however, with Robinson going in the 5th round to the Seahawks and Coleman signing as an UDFA with the Colts. However, my film study was not for nothing considering I found one of my early draft crushes for the 2021 draft cycle. Andre Cisco was a player that kept making plays during my Syracuse film study, catching my eye on more than one occasion. When I dug deeper into his film and focused solely on him and what he was doing on the field, I left even more impressed than I was before. In my first player breakdown of a 2021 NFL Draft prospect, I will be going over some of Cisco’s strengths and weaknesses while highlighting some of my favorite plays from the Syracuse safety.

Born in Queens, New York, Cisco was a three-star recruit coming out of IMG Academy in Bradenton, Florida. Andre Cisco did not take long to make an impact, starting 11 out of 13 games he played in as a true freshman. Not only did he start, he excelled in the role they asked him to play at free safety. He led the nation in interceptions in 2018, his true freshman season, with 7 interceptions. He earned All-American honors for his efforts in the 2018 season. To follow it up, he had a fantastic sophomore season where he fell just short of his previous season’s interceptions number with 5. He is now the nation’s leading active interceptions leader with 12. Not only that, he is 2nd in the FBS in passes defended per game at 1.27. He boasts quite an impressive resúmé for a young man that just turned twenty in March.

As I alluded to earlier, Cisco is a hybrid safety that can excel in coverage while also being able to run downhill and be effective as a box safety. That description sounds very similar to a safety that is currently on the Texans roster who goes by the name of Justin Reid. This is where the fit becomes really intriguing. I believe that Cisco is clearly better in coverage than Reid right now, while Reid is clearly better in the box than Cisco right now. If Cisco were to end up in Houston, you now have two hybrid safeties that play off each other’s strengths extremely well. That would give the Texans a lot of freedom in play calling considering you essentially have two positionless safeties that you can put in a variety of roles. With all that being said, it becomes clear that Andre Cisco fits like a glove in this Texans defense.

Andre Cisco is a safety that has a gift to find the football and make a play on it. Whether that be him filling holes and helping downhill in run support or tracking down the football in coverage with his elite ball skills, he knows how to make plays. He is a well rounded safety that would help pretty much any NFL team almost immediately. Cisco is one of the smartest players in coverage that I have ever studied. His route recognition and understanding of offenses is next level and is something that will translate heavily to the next level. He needs to work on his tackling technique to truly reach his full potential as an elite safety, so hopefully he cleans that up in the 2020 season. Cisco’s instincts and ball skills are always going to be his calling card, but cleaning up some of the minor flaws such as his aforementioned tackling skills and slightly slow feet will be key to him taking the next step as a safety.

I am now going to dig into Andre Cisco’s film a little bit so I can highlight some of his strengths that I mentioned earlier. I am only going to show three plays in the article, but I do have a thread that will be published along with this piece on my Twitter account, @Texans_Draft. I will be showing a lot more of Andre Cisco in that thread so please make sure to check that out. Now, let me show you a few of the plays that Andre Cisco made this past season.

In this first play you get to see his instincts in coverage that I have been raving about. He is in a simple zone coverage here when he quickly recognizes the crosser and makes a lightning quick break on the football to minimize the gain. If he recognizes that route just a split second later, the angle might be against him and the receiver probably picks up the first down. His field awareness and athleticism are on full display in this sequence.

In this next play Cisco shows us his ability to play in the box and run downhill to fill holes in run support. He does a fantastic job of predicting which hole the ball carrier is going to bust through and has the closing speed to fill the hole and make the play. You can also see the tackling issue that I have been alluding to throughout this piece. He wraps up nicely, but I would like to see him drive his legs more so the ball carrier doesn’t gain those extra couple yards that he did on this play. Overall, though, this was a very solid sequence from Cisco that showcased his ability to be a box safety when called upon.

In the last play that I will highlight in this article, we get a glimpse into what Andre Cisco can be as a single high safety dropping into coverage. Although he is not in single high in this play, we see his instincts and range in coverage. His route recognition is impressive during this sequence as he does not bite on the trick play, immediately recognizing the receiver coming out of the backfield. He then tracks the ball well with his elite ball skills and makes a play on the ball aided by his tremendous closing speed and break on the ball once again.