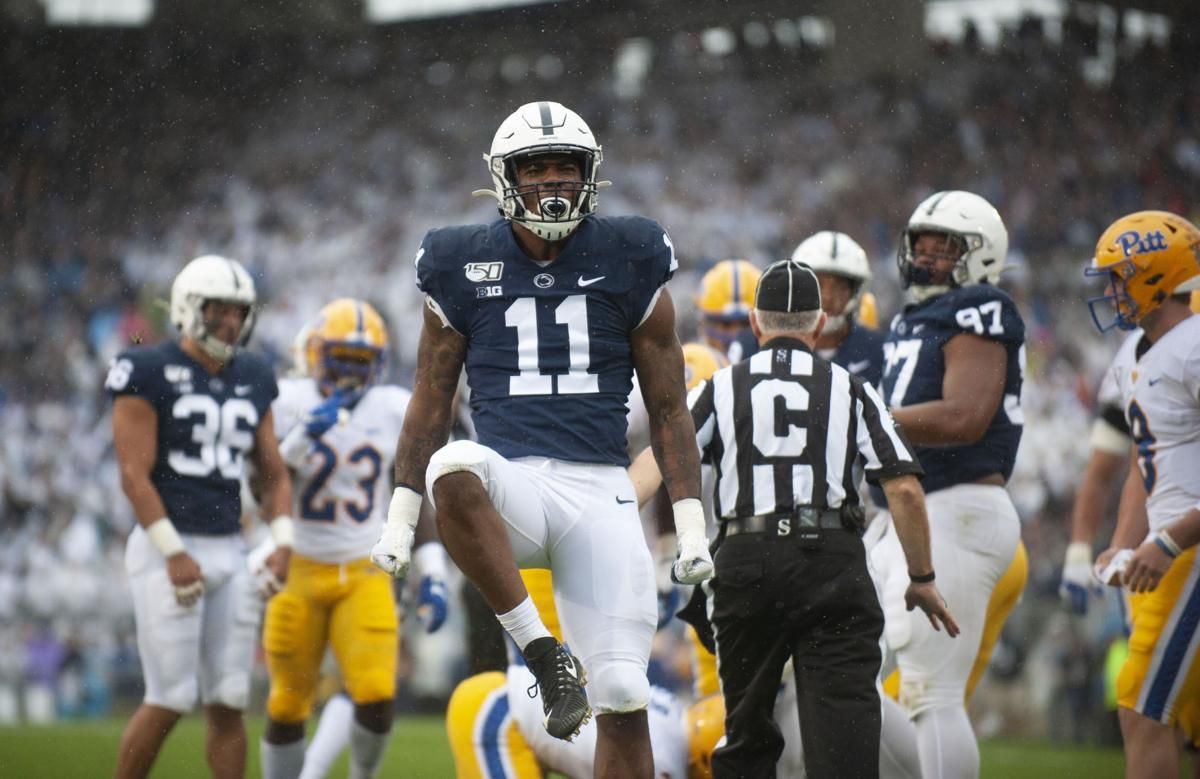 In week two of our weekly film review that we do with YoungAriGold, we decided to take a look at Micah Parsons, the super talented linebacker from Penn State. We all left super impressed with his film and were comfortable calling him a top ten lock if he stays healthy and out of trouble this upcoming season. We grouped together some of his best plays and broke them down in this article for you guys, hope you enjoy.

A huge part of Parsons game was his blitzing. PSU would blitz him up the A Gap or even off the edge. When he's over the A Gap I can't help but be reminded of Jadeveon Clowney. He's like a missile just being shot up the middle of the OL. He's such a dynamic and versatile LB, there really isn't anything he can't do. This play shows off his elite burst and speed. He times the snap perfectly and comes free unblocked. The QB is screwed and has no chance in escaping Parsons. The freakish athleticism is on full display. He's gonna be a guy who can get after the most mobile QBs too.

This next blitz was a big more delayed, but the idea is the same. His speed is a weapon, and he's able to find the hole in the OL easily. He comes flying in and finishes the sack. A lot of defenders will come in full speed but then get juked easily. Not Parsons, of the three games we watched, he didn't even miss three tackles.

Just another blitz where he comes in free. PSU was good at scheming blitzes like this, but it also helps to be a freak athlete and get to the QB this quickly. He nails the QB. on this one too, he's gonna be feeling that one for a while. Parsons is going to be a chess piece and do it all player in the NFL. Hopefully he gets with a creative DC (Weaver pls?) who can utilize him to all of his strengths.

While the first couple blitzes Parsons came free unblocked, he shows some great pass rush moves here to get by the OL. He isn't always going to be unblocked, but as a former DE in high school, he has enough moves to pair with his athleticism, that makes him so dangerous. He dips his left shoulder here to get around the Center's attempt at a block. He's so smooth and slippery with this move, that he can easily get by the Center. Then boom, another bone breaking hit on the QB.

I had to save the best for last, and I hope you're still reading at this point. Parsons hits the Center with a beautiful inside out swipe swim move. He takes a step to his right, then swipes away the Center's hands. Then he goes to his left and swims over, so that the Center can't get hands on him easily. He looks like a veteran pass rusher on this one.

Parsons is as good as a LB can be in coverage. His freakish athleticism and fluid movements help him greatly. He looks like a strong safety, not a LB in coverage. Routinely lining up out wide or in the slot, to take on WRs. He's not someone who will need to come off the field on passing downs. He's actually someone who can help take away a playmaker. Here's three plays meshed into one video, to showcase his coverage talents.

He's great in zone coverage, as evidenced by the first play. He starts to take away a deeper route, then notices the WR coming open underneath him, and runs to take him away too. He can cover so much ground it's just not normal for a LB.

The next play Parsons is guarding a RB out of the backfield, and reads the route perfectly. He undercuts the RB and just barely drops the INT. He should've had 6 here. It's his great instincts like this that make him so damn good.

The last play is just solid coverage against a slot WR. The WR tries to lull him to sleep, and then lose him with a quick cut. But Parsons isn't fooled and sticks right with him.

The next three plays are definitely standout plays, with great points to take away, but just didn't really fit in any of the other categories we had for Parsons. On this play he expertly shoots the gap, timing his attack nicely, and teleporting into the backfield to blow up the play. Parsons elite athleticism is on full display every play. He looks like he's shot out of a cannon on this play, showing great burst. Memphis has a lot of fakes on this play, but it doesn't matter. As a sophomore, Parsons was great at diagnosing plays and blowing them up. That recognition will only get better next year.

Another nice play here, this time Parsons fills his gap really nicely, and makes the play for his teammate. He trips while getting through his gap but remains balanced and blows up the block. This leaves Safety #17 unblocked and can make the easy tackle. As we've mentioned, Parsons was great at making plays himself, but also setting up his teammates to succeed.

This last play was just great reading by Parsons. You can see him reading what angle to take and how to expertly avoid the blocks. Parsons also shows off great speed to get to the sideline. He looks like a hunter hunting his prey, then just leaps out and attacks the RB. He navigates all the traffic easily and makes the tackle. He's gonna be a tackle machine, easily getting 100+ tackles pretty early in his career.

Next, I grouped together a few plays in the video below to showcase Micah Parsons's elite range and sideline to sideline speed. When you watch his tape, it is clear to see that Parsons has elite athletic ability, and when you couple that with his above average football IQ, you have a special linebacker that can run stop with the best of them. He diagnoses plays super quickly and accurately constantly and it blew us all away that he was such a smart football player considering he is only a true sophomore. His range is probably the most impressive skill that he possesses considering that he came out of high school as a defensive end and this is only his second season playing linebacker full time.

The main that thing that we all raved about in Parsons' game was his ability to almost always get off blocks and disrupt the play. Whether it was through a side step or a swipe, he had a variety of ways to make the blocker whiff and get into the play to make the tackle. The body control that Parsons possesses for a man his size is quite impressive and that shows up in the plays below. He has such great balance when getting around blocks, most of the time he out maneuvers blockers through his short area quickness and body control. It was certainly impressive to see such a large man get around blocks with such grace and elegance.

Of course, we had to nitpick and point out a couple of Micah Parsons' weaknesses and one of them seemed to be that he bit on play action quite a bit when he was supposed to be in coverage and left a few passing lanes open as a result of it. This could have been because Penn State coached them to always play the run first and be aggressive that way, but it could also be a flaw in his game that. we should look for him to clean up in this upcoming season. It isn't something that really concerns me anyways considering that you should not be relying on your LB that much in coverage, but it was something that we all noticed and are going to keep an eye on in his development.

The last film we will show from Parsons highlights another one of his weaknesses, this is one that concerns me a bit more. I noticed in a few plays when watching his film that when meeting a physical runner head on, he often times gets overpowered and gives up an extra few yards, the first play in the clip below being a great example of that. I think this can be easily fixable for Parsons if he puts on about seven more pounds and really fills out his frame. Right now, he is a little slender for a linebacker and I think that seems to be why physical runners seem to get the better of him at times. If he doesn't fill out his frame, however, this will be the major concern for him coming out of college. His tackling technique will need to become a lot better if his frame stays the same and he is going up against the physical backs of the NFL.