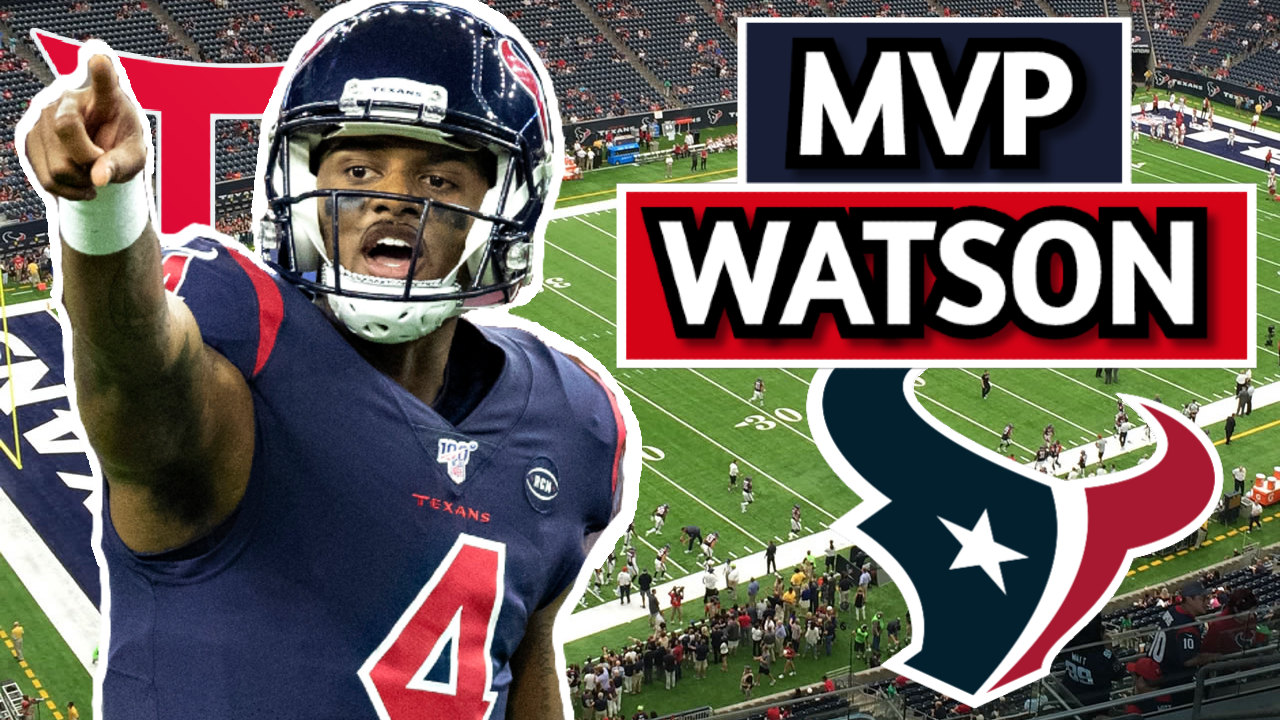 After powering through QB purgatory, Houston Texans fans have seen the light at the end of the tunnel, in the form of Deshaun Watson. A true savior for an otherwise uninspiring franchise. With Deshaun, there is always a shred of hope, that no team is unbeatable, no conquest unwinnable, and no triumph unachievable. Since his time at Clemson, to his rookie year and now going into the 2020 season, Watson has improved drastically, to the point where he has a surprisingly great shot at winning the MVP this season. In this article we’ll break down why that shouldn’t come as such a surprise.

A look at the line

Let's start by looking at his odds for winning MVP. Sports Betting Dime has Watson ranked with the 6th highest odds of winning MVP (+1700), behind Patrick Mahomes, Lamar Jackson, Russell Wilson, and Dak Prescott, while also level with guys like Carson Wentz and Drew Brees. 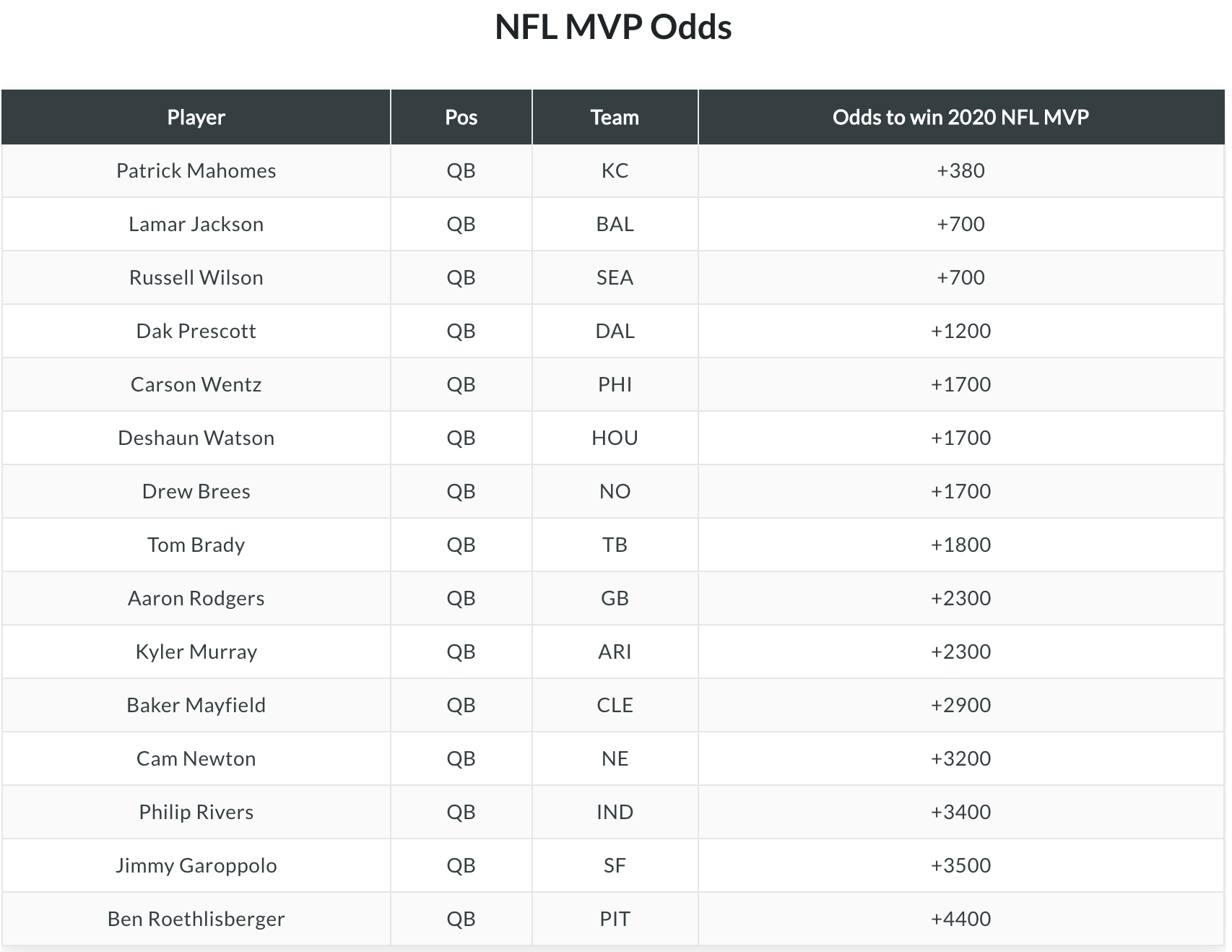 I think this is a fairly accurate ranking of Watson, as the MVP award is different from simply ranking who is the best QB in the NFL. Let me elaborate, to win MVP, not only do you have to put up eye opening stats, but quite often your team needs to be at the top of the NFL.

As shown, team success plays a huge factor, and it makes sense because if you are truly the "Most Valuable Player", you must also lead your team to being the best. While I'm on the optimistic point of view towards the Texans, I do not necessarily see them being the absolute best team in the NFL. So while I would rank Deshaun Watson as a better QB than all those other QBs except for Patrick Mahomes, I understand the hesitancy behind his ranking. But here's the thing: Deshaun having a somewhat lower ranking, is actually a good thing! Since he has lower odds, the payout is obviously higher, and for those who have never bet in sports before, saying Watson has +1700 odds means that for every $1 you spend, you can potentially win $17 if Watson is crowned MVP. That sounds like some pretty damn good risk/reward to me.

Why this is easy money

Now, why do I believe so highly in Deshaun? Well, that's a long story, but let's first look at his stats from last season, where he finished 6th in Completion % (67.3%), T-8th in TDs (26), 13th in Yards (3,852), 21st in INT% (2.4), and overall was 11th in QB Rating (98.0). You might think to yourself, these are the inspiring stats that are supposed to make me confident in betting on him? Well, I get where you’re coming from, but so much has changed with the Texans from 2019 to 2020. The team is now completely built around Watson's strength of throwing the deep ball. Losing DeAndre Hopkins could be scary for most, but replacing him with Brandin Cooks and Randall Cobb has actually made me comfortable. 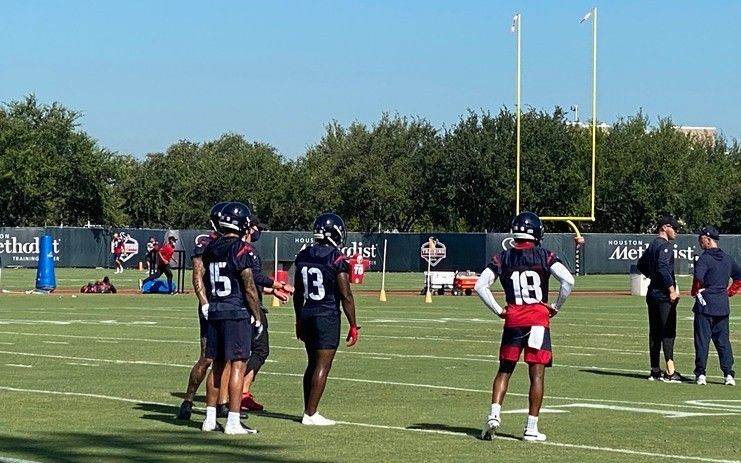 The issue before was that NFL defenses knew the ball was going to Hopkins, and they could gameplan around that. Now, with four proven and talented WRs (Will Fuller, Brandin Cooks, Kenny Stills, Randall Cobb) Watson has all the weapons in the world (add in David and Duke Johnson) at his disposal to ball out. We should see a huge rise in passing yards because the style of the offense will be built differently.

Before, we would utilize a quick short passing game, to get the ball in Hopkins hands, and also hide our horrendous offensive line. But after the immense investment in the Texans OL, and adding another speed demon in Brandin Cooks, the offense looks to be more of a vertical deep passing attack. This will likely increase Watson's yards per completion, and inflate his total passing yards. This change in offensive personnel and scheme, gives me faith that the Texans offense will be revamped, and Watson, as the engine of it all, will put up ridiculous numbers.

All this to be said, if you know me, you know that I believe strongly in watching a player's film and I just posted a YouTube video breaking down Deshaun Watson's 2019 season. CLICK HERE: Houston Texans Deshaun Watson Film Breakdown | 2020 NFL MVP? | Michael Jordan of the NFL | CLUTCH QB I broke down what he does that makes him so special: off script plays, throwing the deep ball and elite ball placement among others. But also what he can still improve on: diagnosing blitzes and not forcing throws. He's still a young player, which I even tend to forget sometimes, and he's shown the work ethic to give me solace that he will continue to improve. If he can perfect his craft like I know he can, MVP does not seem like a tough feat whatsoever.

Deshaun Watson's future is brighter than the sun, and I implore you to have faith in our young GOAT like I do. MVP is on the horizon, why not make some money out of it?